About 100 years ago, the American astronomer Edwin Hubble discovered that various types of galaxies exist in the Universe, from beautiful spiral galaxies to smooth elliptical-shaped galaxies. The current Universe containing various galaxies is like a zoo of galaxies. One of the biggest enigmas in galactic astronomy is how the population of galaxies was born and has evolved.

A research group, consisting of astronomers mainly from the National Astronomical Observatory of Japan (NAOJ), applied a deep-learning technique, which is one of the base techniques for artificial intelligence, to a large dataset of galaxy images obtained in the 300-night-long large survey program (Subaru Strategic Program) with the ultra-wide field-of-view camera, Hyper Suprime-Cam (HSC), installed at the prime focus of the Subaru Telescope, and succeeded in automated classification of galaxies according to their morphologies with a very high accuracy of 97.5%. Accordingly, spiral patterns were identified in as many as about 80,000 galaxies. Most of them are found to be located in the distant Universe of more than 2,500 million light-years away (Figure 1). 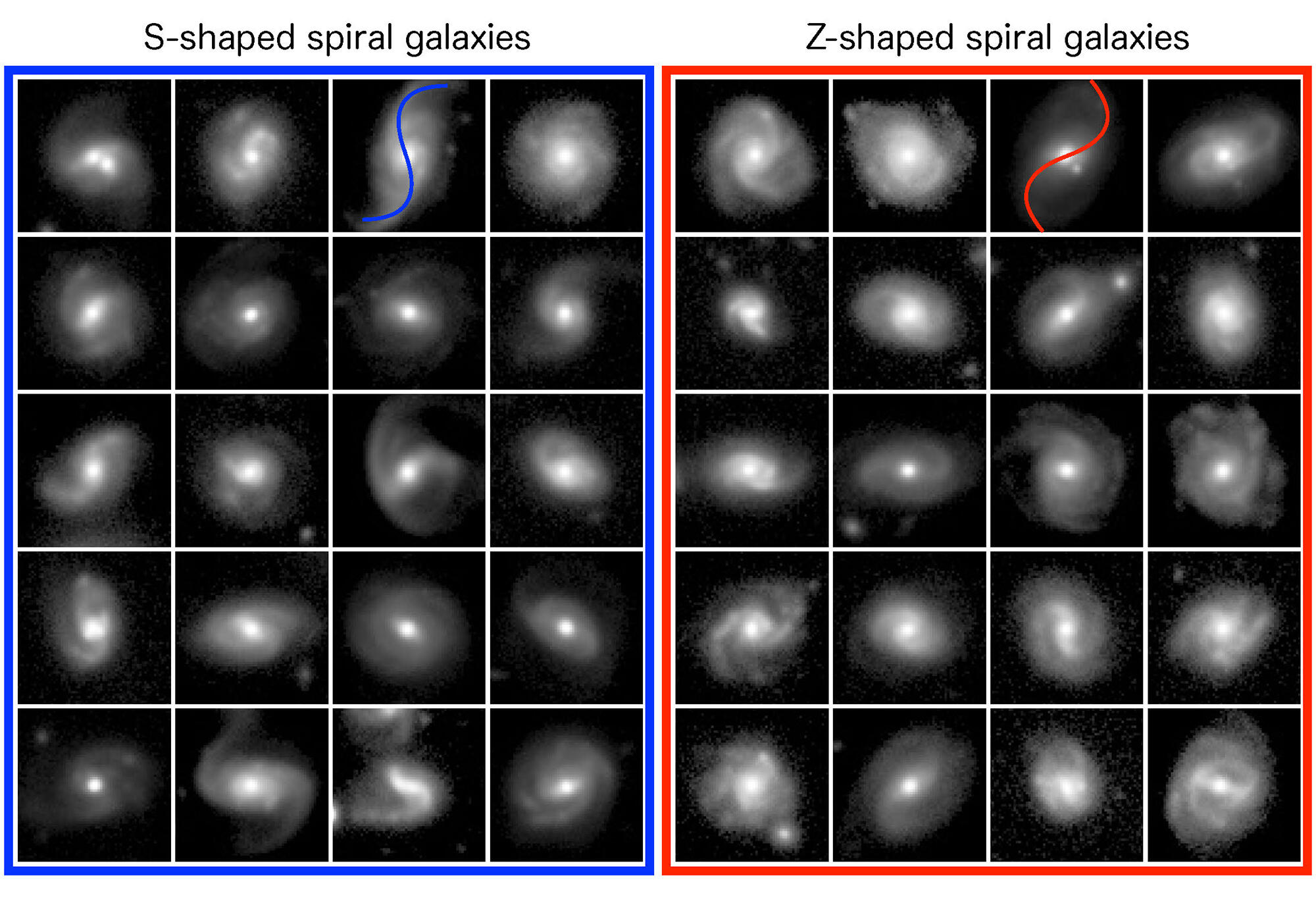 The spiral patterns of such distant galaxies have been indistinguishable in the conventional survey data of the Sloan Digital Sky Survey (2.5-m diameter telescope). However, they are clearly distinguished in observed images of HSC, which has a 2-times higher resolution and 36-times higher sensitivity (Figure 2). Thanks to its high sensitivity, as many as 560,000 galaxies have been detected in the HSC survey images. It would be extremely difficult to visually process this large number of galaxies one by one with human eyes for morphological classification. The deep-learning technique enabled the team to perform the processing without human intervention. 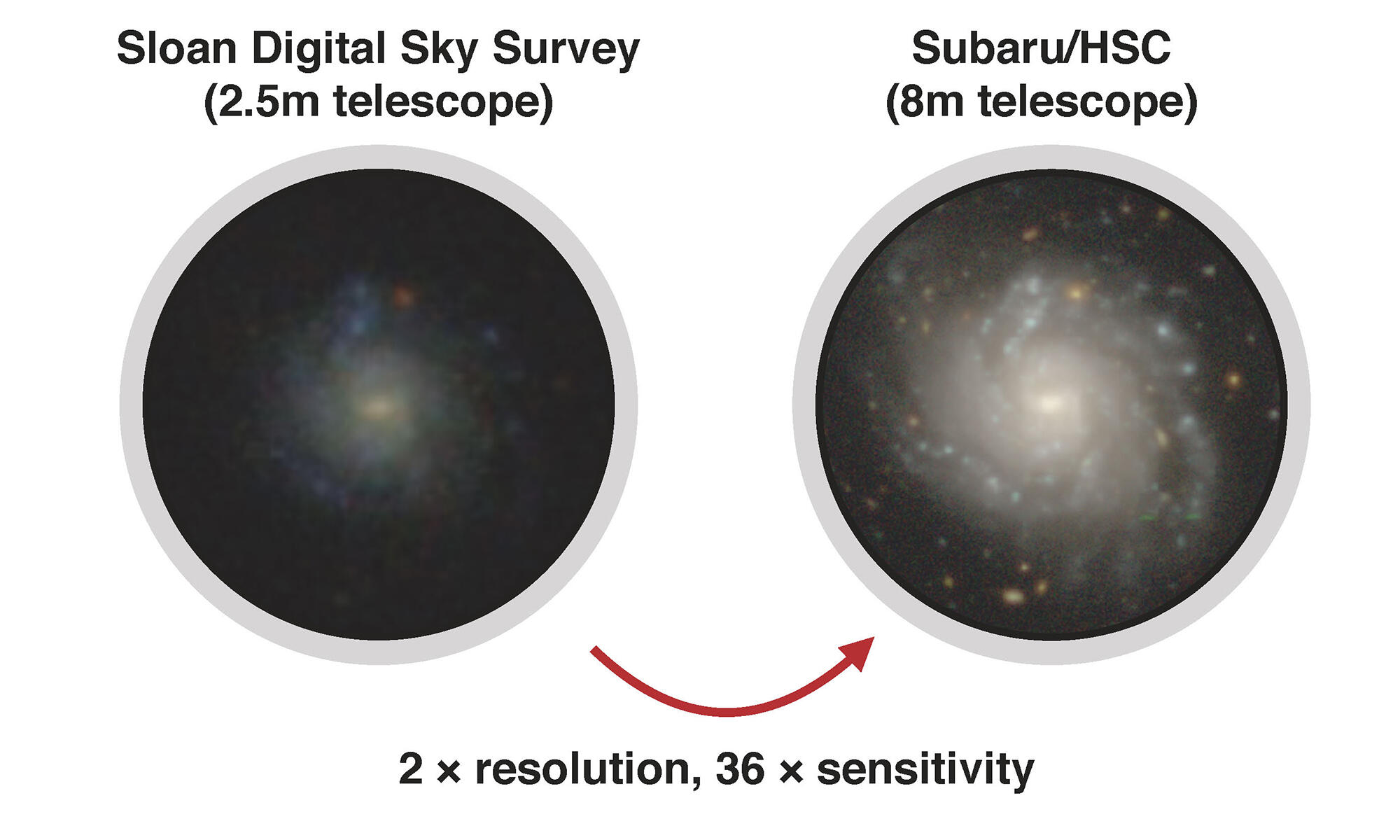 The reason why humans can recognize a cat when they see an image of a cat is that they recognize specific features like the outlines of eyes and nose of the object and make a synthetical judgment, combining the experience and knowledge they already have. Automated processing techniques for extraction and judgment of features with deep-learning algorithms, in particular image classification with convolutional neural networks (see Note 1), have been rapidly developed since 2012. Nowadays, they usually surpass humans in terms of the accuracy and are used for autonomous vehicles, security cameras, and in many other applications. Dr. Ken-ichi Tadaki, a Project Assistant Professor at NAOJ, came up with an idea that if those automated processing techniques can classify images of cats and dogs, they should be capable of classifying "galaxies with spiral patterns" and "elliptical-shaped galaxies" in a similar manner, and he then initiated the "Subaru galaxy zoo" project (see Note 2), where deep learning techniques are applied to the big data taken with the Subaru Telescope for classifying galaxy morphology (Figure 3). 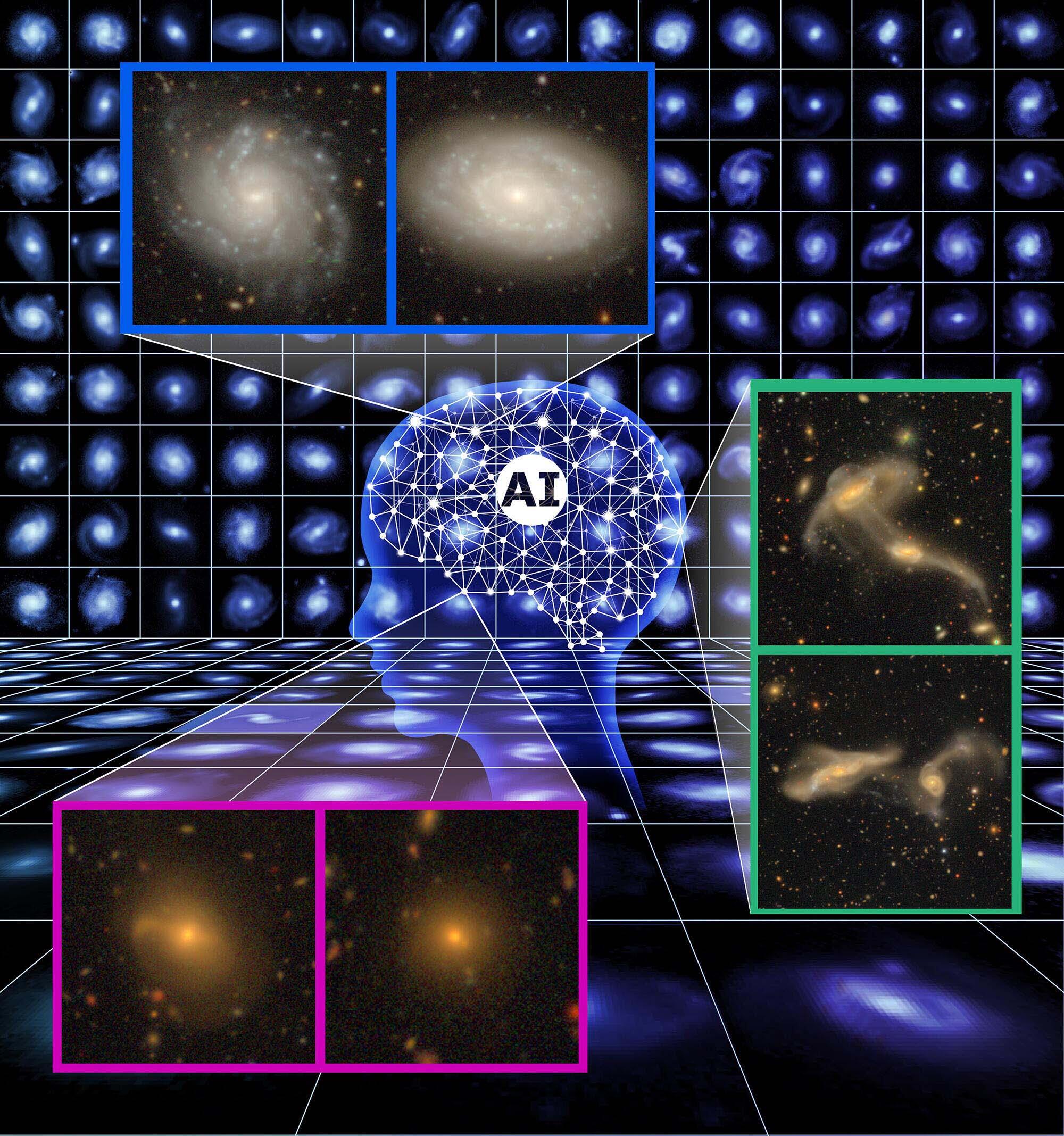 Figure 3: Conceptual illustration to show how artificial intelligence classifies various types of galaxies in the Universe according to their morphology. The base-line techniques are applied in many fields, such as classification of animal images. Application of convolutional neural networks to images of galaxies is expected to yield morphological classification of the galaxies into not only "spiral galaxies" but also other types of galaxies, including "barred spiral galaxies" and "merging galaxies." (Credit: NAOJ/HSC-SSP)

In addition, one can extend this work to classifying galaxies into more detailed classes, only if one has trained the artificial intelligence on the basis of a substantial number of galaxies classified by humans. NAOJ is now running a citizen-science project "GALAXY CRUISE," where citizens examine galaxy images taken with the Subaru Telescope in search of galaxies with features suggesting collision or merging with another galaxy and classify them into "ring galaxies" and "galaxies with tails." The advisor of "GALAXY CRUISE," Associate Professor Masayuki Tanaka has high hopes for the study of galaxies using artificial intelligence and says, "The data of the HSC in the Strategic Program are serious Big Data and contain an almost countless number of nearby to distant galaxies in the images. Scientifically, it is very interesting to tackle such big data with a collaboration of citizen astronomers and machines. By employing deep-learning on top of the classifications made by citizen scientists in GALAXY CRUISE, chances are, we can find a great number of colliding and merging galaxies."

With a new ultra-wide-field multi-object spectrograph PFS on the Subaru Telescope, whose operation will start in 2022, a large-scale survey to measure the distances of galaxies is planned. "Once we know the distance of a galaxy, we can tell how many billion years ago the place of the galaxy is. To study and understand how galaxy morphology has evolved over time is our ultimate goal," says Dr. Tadaki, describing the prospects of the project.

Note 1: Convolutional neural networks do not use raw images directly, but apply a series of mathematical operations called "convolution" to the raw images multiple times, which reduces the amount of the information of the images and enables the neural networks to work out efficiently local features like outlines of distinctive objects in the images.

Note 2: There is a project called "Galaxy Zoo/Zooniverse" that uses images of the Sloan Digital Sky Survey to classify galaxies according to their morphology.