The PFS is an international collaboration led by the Kavli Institute for the Physics and Mathematics of the Universe, which aims to uncover the identity of dark matter and dark energy by studying the spectra of light from distant objects in the Universe. It is made up of several components, which work together with the Subaru Telescope (Figure 1). At the prime focus of the Subaru Telescope, just under 2400 optical fibers collect the light from stars and galaxies simultaneously. The light is then split into its different wavelengths, ranging from 380 nm to 1260 nm, while the metrology camera located at the bottom of the telescope, measures the position of the fibers on the prime focus. 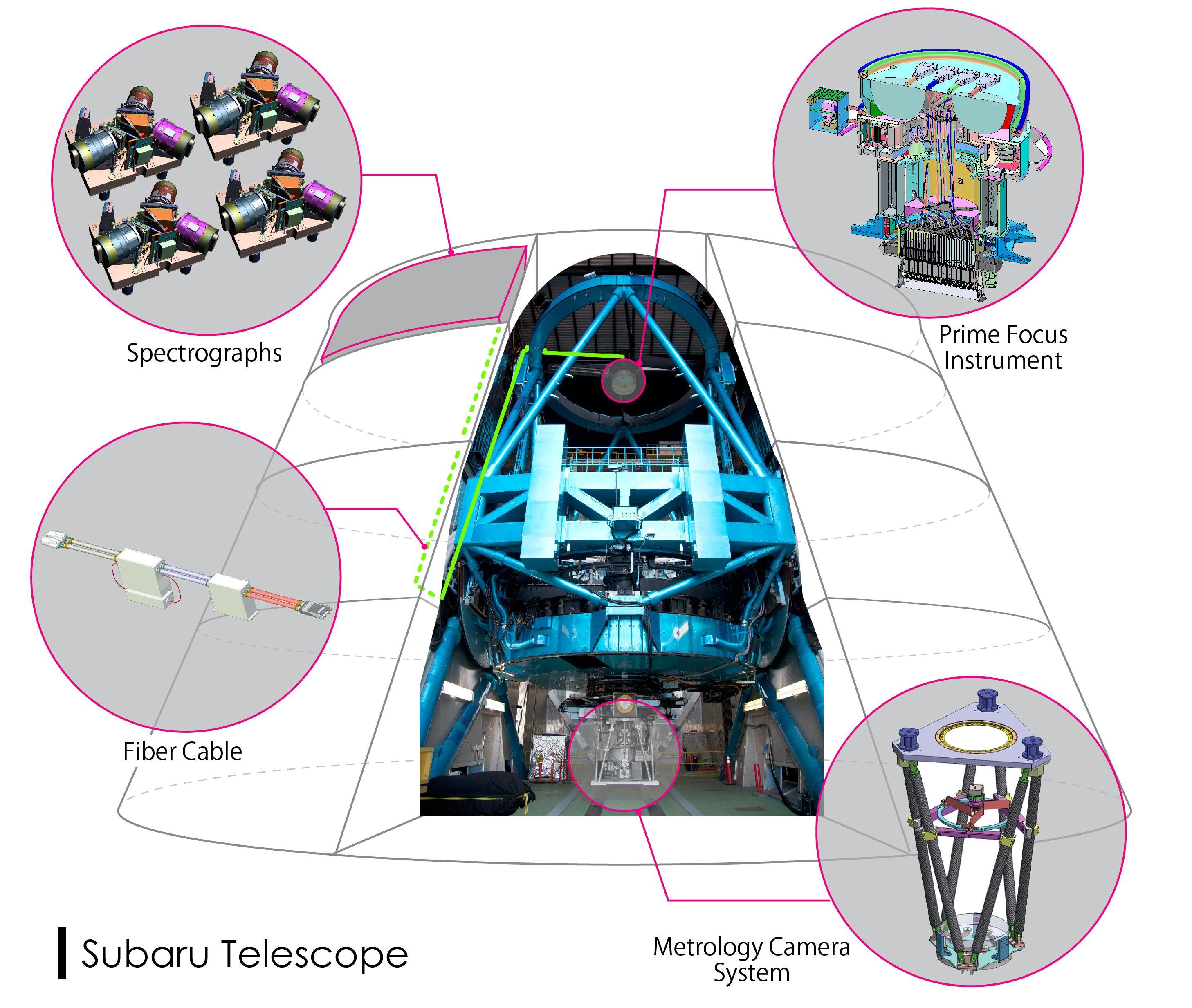 Figure 1: Components of the Prime Focus Spectrograph (PFS) on the Subaru Telescope. The Metrology camera sits at the Cassegrain Focus of the telescope, and will look up ~2400 optic fibers attached at the top of the telescope. (Credit: PFS Project/Kavli IPMU/NAOJ)

The Academia Sinica, Institute of Astronomy and Astrophysics (ASIAA) in Taiwan has been responsible for developing the metrology camera.

The camera was transported from Taiwan to Hawaii in April 2018, and then its basic functions were tested at its final resting place at the bottom of the Subaru Telescope. By October of the same year, the team had set up an artificial light source called a pinhole mask system, a metallic sheet dotted with a number of tiny precision holes (each 129 microns in diameter) on a flat glass to mimic the conditions the PFS would be exposed to, to test the camera's accuracy (Figure 2). 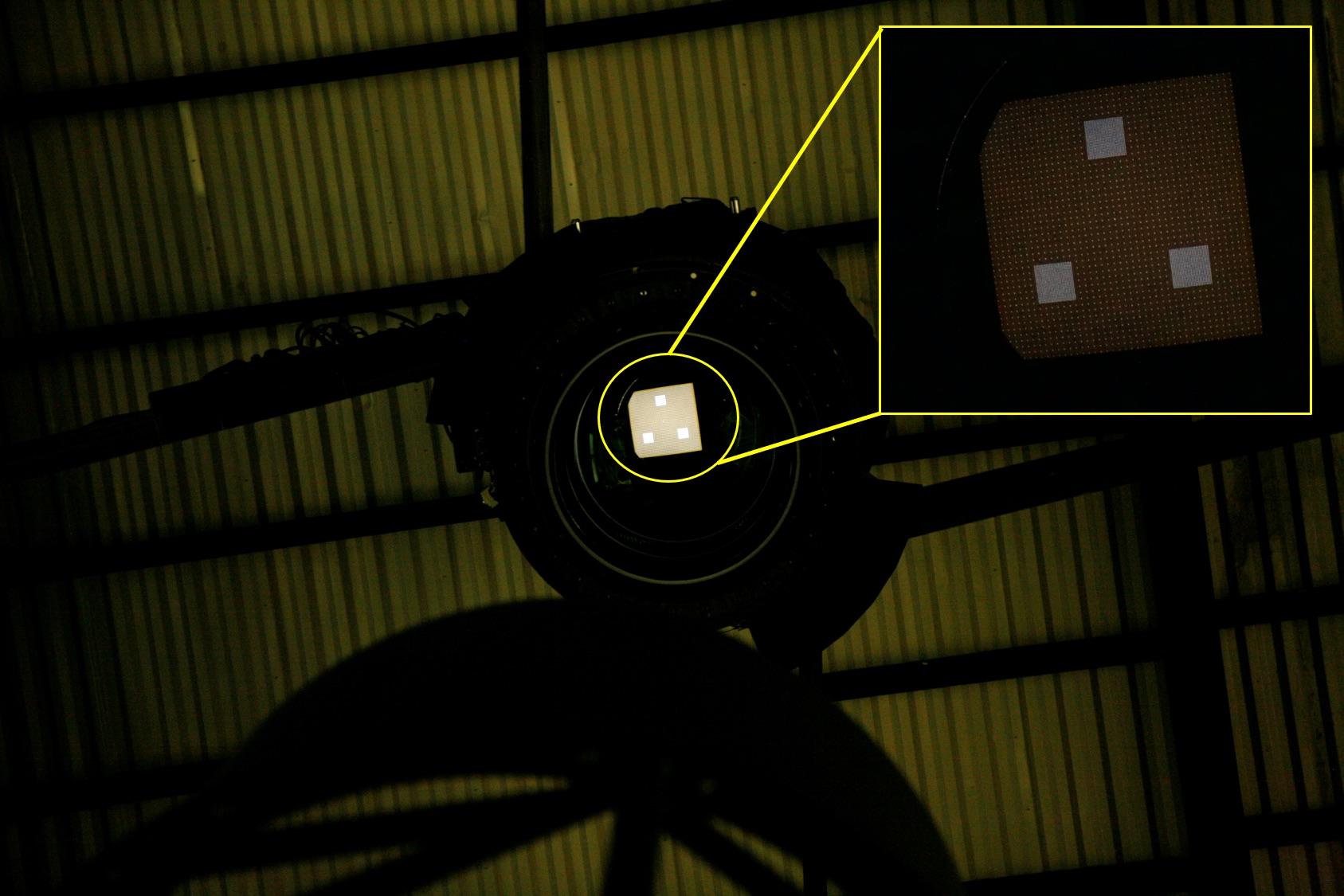 Figure 2: Pin hole mask illuminated by the light source behind. The three squares at the center show the higher density areas. (Credit：PFS Project)

The results of this first trial revealed what needed to be improved both with the camera in such special circumstances as on the telescope in a high-altitude environment, and the software used to analyze data.

The August 2019 trial was the first trial after improvements had been finished (Figure 3). 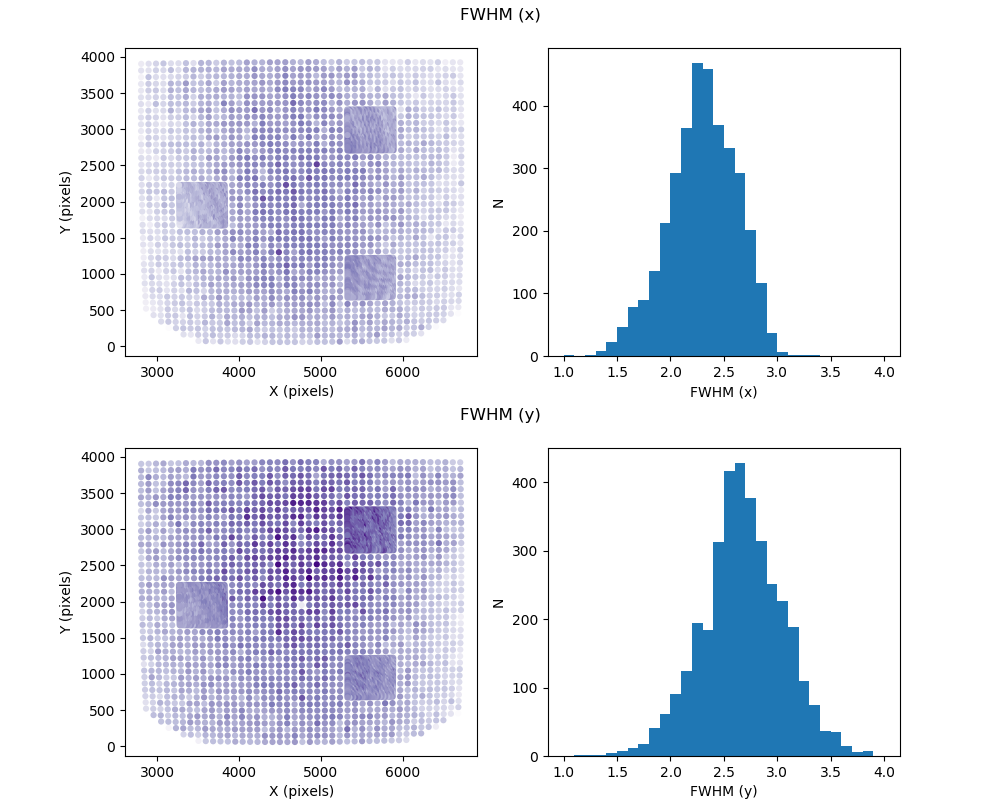 Figure 3: On the left side, the sizes of the pin hole spots measured as FWHM are plotted as color darkness on the map of the metrology camera CMOS detector. FWHM (Full Width of Half Maximum) is the size of the area where the brightness goes down to the half of the peak. Top-left panel is FWHM for X-axis, and bottom-left for Y axis. On the righthand side, number distribution of measured FWHM over the detector is shown as histogram. Top-right and bottom-right is for X-axis and Y-axis, respectively. These histograms show that FWHM is 2.5 in both X and Y axes, which implies the spot is almost round. (Credit: PFS Project)

Now, the metrology camera will wait for the other components of the PFS to be completed and shipped to the Subaru Telescope. These include the almost-completed fiber positioner system currently at the California Institute of Technology, the Prime Focus Instrument being developed at ASIAA, the fiber cables being developed in Brazil, and the spectrographs being developed in France. One part of the spectrograph has already been shipped to and re-assembled at the Subaru Telescope. The collaboration is aiming to complete the PFS instrument development by 2022. 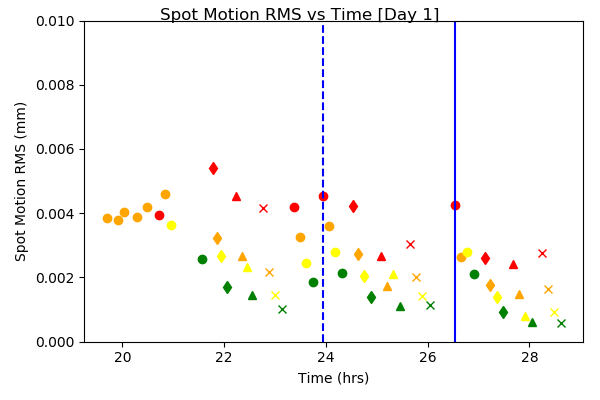 Figure 4: Dancing of measured position of the pin hole spots for different exposure times and telescope elevation angles (tilt angle). In the period of time shown in the figure, lots of images of pin hole mask spots were taken at different exposure times and telescope elevation angles. Ordinates indicate how much the spots move during one measurement. Each datapoint, which is derived as root mean square of a series of 50 images, shows variation of one measurement. Abscissa is local time of measurement. Color differs among exposure times (Red: 0.5 sec, orange: 1 sec, Yellow: 2 sec, Green: 5 sec), while shape differs among telescope elevation angles. When exposure time is 1 sec or longer (orange, yellow green marks) dancing of pin hole spots is below the 0.004mm as the root mean square, which meets the requirement. (Credit: PFS Project)

What is the Prime Focus Spectrograph?

The Prime Focus Spectrograph (PFS) is an instrument currently being developed, which will be mounted on the 8.2m Subaru Telescope at the summit of Maunakea, Hawaii. The instrument splits up the light from celestial objects, such as stars and galaxies, into their various wavelengths. The resulting data set is called a “spectrum”, which is used to study various details of a celestial object such as its motion.

The PFS will be capable of collecting spectra from ~2400 celestial objects at once.

Sub-components and sub-systems of the PFS are being built, assembled, and tested in the US, France, Brazil and Taiwan, before being shipped to the Subaru Telescope. It is aiming to be ready for operation of scientific use in 2022.

What will the Prime Focus Spectrograph study?

Using the prime focus of the Subaru Telescope's 8.2m primary mirror, researchers can look at a large area of the night sky at one time. Using the Hyper Suprime-Cam at the Subaru's prime focus, researchers can take sharp images over a wide area of sky in one exposure and find many celestial objects far into the distant Universe. Using the PFS, researchers will be able to take their spectra quickly (up to about 2400 objects in one exposure), measure the motions of stars, see how far the galaxies are, and obtain various other information which can be seen only on spectra and not visually in images.

By studying spectra of a large number of objects, researcher will be able to create a census of the Universe, uncovering clues about the identity of dark matter, dark energy, and galaxy formation and evolution.

What will the Prime Focus Spectrograph study?