Dramatic Starbursts Hidden in Protoclusters at 12 Billion Years Ago

A team of astronomers from the National Astronomical Observatory of Japan (NAOJ) and the University of Tokyo has detected the strong infrared emissions from protoclusters at 12 billion years ago by using the deep and wide extragalactic survey with Hyper Suprime-Cam (HSC) on the Subaru Telescope and archival infrared data taken by various space telescopes. The detected infrared emissions were brighter than that which was expected from the galaxy population observed in the visible. These results indicate dramatic star formation and super massive black hole growth which are not observable in the optical but luminous in the infrared. 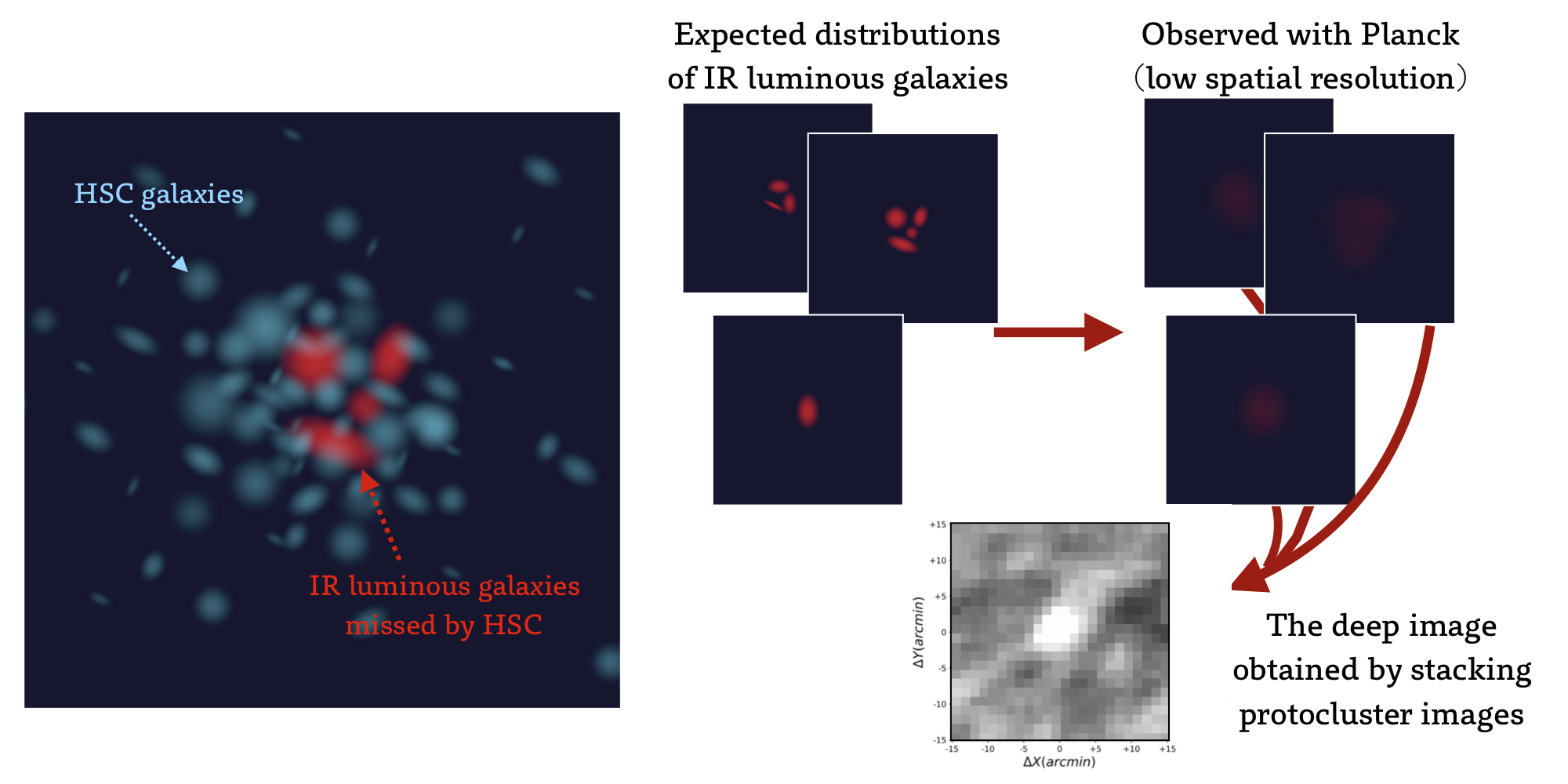 Figure 1: A schematic view of the image analysis in this work. First, the team selected protocluster candidates at 12 billion years ago from the deep and wide extragalactic survey with HSC. Then they used the archival full sky survey images at mid-far infrared taken by infrared space telescopes like Planck to investigate the infrared properties of galaxies in protoclusters. The spatial resolution and sensitivity of these images are too low to resolve distant galaxies individually, however, by stacking the images of the 180 protocluster candidates selected with HSC, the team successfully constrained the average total infrared flux of a protocluster. (Credit: NAOJ)

HSC on the Subaru Telescope enables an effective search for protoclusters. HSC is an optical camera with an extremely wide field of view (about 1.8 square degrees, equivalent to the area of nine full moons) and high sensitivity. Now, a deep and wide extragalactic survey is on-going with HSC (HSC-SSP). From the 120 square degree survey of the first HSC-SSP results, the team selected about 180 protocluster candidates. This is the largest catalog of protoclusters ever (March 4, 2018, Press Release from Subaru Telescope).

The Subaru Telescope is an optical telescope, but to study galaxy properties in more detail, observations at various wavelengths are needed. In the case of a rapidly star forming galaxy, most of the light from its young stars, which is an indicator of the star formation rate, is absorbed by its surrounding dust. The team needed to observe the infrared/radio emissions re-emitted from the dust to evaluate the star formation rate of a galaxy correctly. However, it is hard to observe in the infrared with ground-based telescopes because most of the infrared emissions are absorbed by water vapor in the atmosphere. There is no working space telescope with the sensitivity required to observe galaxies at 12 billion years ago in the infrared. ALMA can observe distant galaxies at radio wavelengths, however, its available wavelength range is limited and it is impractical to observe over 100 protoclusters.

To investigate the infrared properties of galaxies in protoclusters, the science team focused on the infrared data in public archives freely accessible to everyone. They used the archival full sky survey images at mid-far infrared taken by five (one is not a full sky survey) infrared space telescopes like Planck (Note 1). The spatial resolution and sensitivity of these images are too low to resolve distant galaxies individually, however, by stacking the images of the 180 protocluster candidates selected with HSC, they successfully constrained the average total infrared flux of a protocluster. Especially, the mid-far infrared flux (30-200 microns) of galaxies at 12 billion years ago has been unknown. 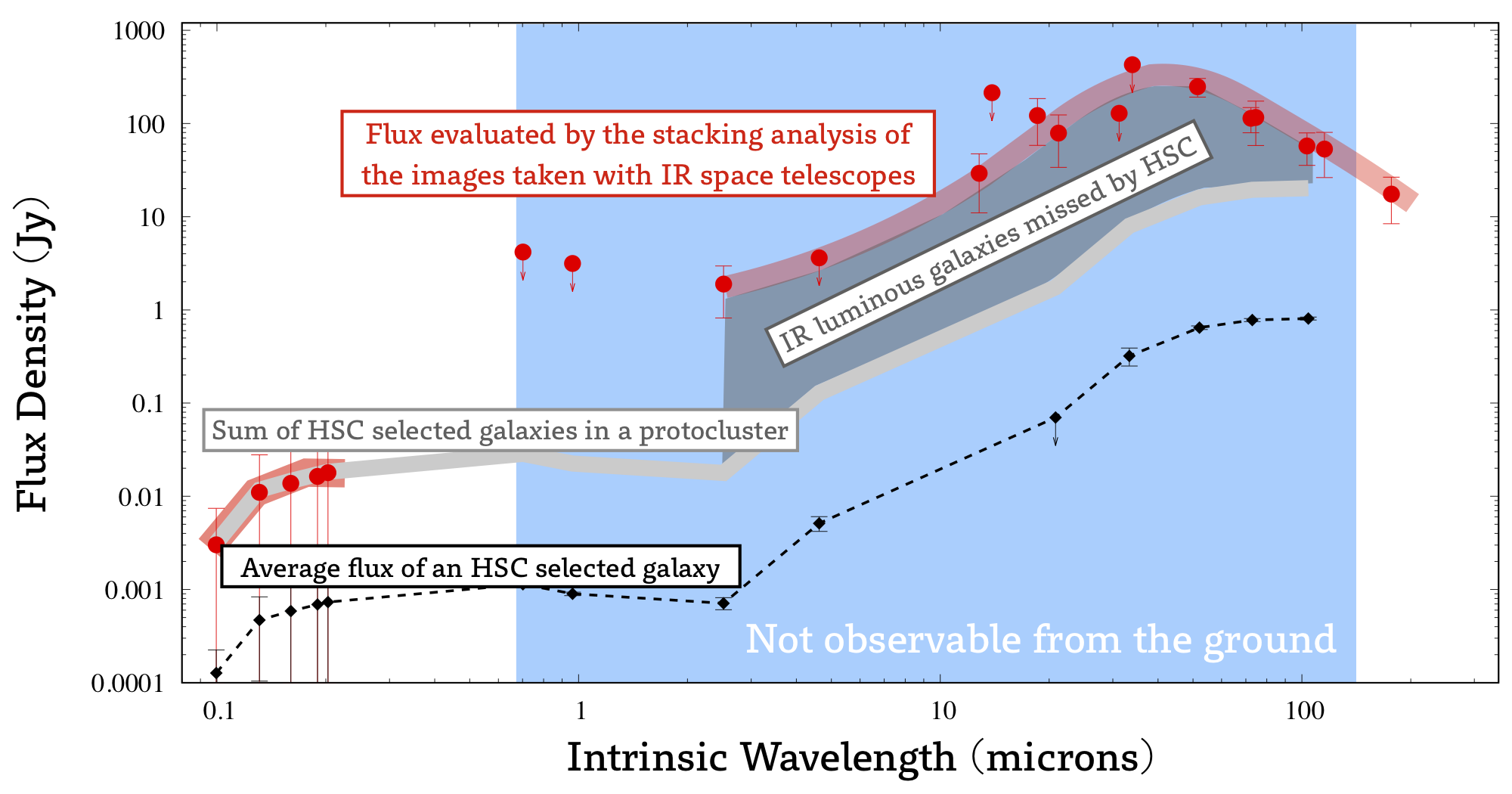 Figure 2: The derived average total infrared flux of a protocluster at 12 billion years ago. The red circles show the total fluxes from all the galaxies in a protocluster. Black points and the dotted line show the fluxes from a galaxy that was detected by HSC. The gray curve shows the infrared flux of a protocluster expected from the optical measurements by HSC. The dark gray region shows the difference in the flux between the actual infrared observations and the expectation from the HSC measurements. This difference implies that there are galaxies which are not observable in the optical but which are luminous in the infrared. (Credit: NAOJ)

Surprisingly, the average total infrared flux of a protocluster is brighter than that which was expected from the galaxy population found by HSC. This implies that there are galaxies which are not observable in the optical but which are luminous in the infrared.

What is the origin of this strong infrared emission? The team investigated the flux to wavelength distribution in the infrared and found that the average dust temperature of the protoclusters is warmer than that of a typical star forming galaxy. That implies that there are not only typical star forming galaxies but also growing super massive black holes at the centers of the galaxies (so called active galactic nuclei) and/or young hot dusty starburst galaxies which heat dust to higher temperatures. This study demonstrates the need to study protoclusters at wavelengths outside of the wavelength coverage of ground-based large telescopes like the Subaru Telescope and ALMA.

To study the galaxies in protoclusters in more detail, individual protocluster galaxies need to be resolved in the mid to far-infrared, however, there is no telescope capable of such observations at this point. The leader of the team, Mariko Kubo (postdoctoral fellow at NAOJ) says, "In the future, SPICA, the future space telescope planned by Japan and ESA, will reveal the mid-far infrared forms of distant galaxies. On the other hand, unlike HSC, SPICA will not be made for wide field surveys. Our results partly complement SPICA's science."

(Note 1) The science team used the data archived by the Planck, IRAS, WISE, Herschel, and AKARI space telescopes. These telescopes finished their missions a long time ago, but the data taken by them is in public data archives. Infrared space telescopes generally finish their lives within a few years because they have to load coolant (which should be exhausted) and operate in a harsh environment. For mid-infrared wavelength observations, the James Webb Space Telescope will be launched next year. However, there is no far-infrared observatory for distant galaxies between the Herschel space telescope, which finished its mission in 2013, and SPICA (planned to be launched in around 2030).