Using Hyper Suprime-Cam (HSC) mounted on the Subaru Telescope, astronomers have identified nearly 200 "protoclusters," the progenitors of galaxy clusters, in the early Universe, about 12 billion years ago, about ten times more than previously known. They also found that quasars don't tend to reside in protoclusters; but if there is one quasar in a protocluster, there is likely a second nearby. This result raises doubts about the relation between protoclusters and quasars.

In the Universe, galaxies are not distributed uniformly. There are some places, known as clusters, where dozens or hundreds of galaxies are found close together. Other galaxies are isolated. To determine how and why clusters formed, it is critical to investigate not only mature galaxy clusters as seen in the present Universe but also observe protoclusters, galaxy clusters in the process of forming.

Because the speed of light is finite, observing distant objects allows us to look back in time. For example, the light from an object 1 billion light-years away was actually emitted 1 billion years ago and has spent the time since then traveling through space to reach us. By observing this light, astronomers can see an image of how the Universe looked when that light was emitted.

Even when observing the distant (early) Universe, protoclusters are rare and difficult to discover. Only about 20 were previously known. Because distant protoclusters are difficult to observe directly, quasars are sometimes used as a proxy. When a large volume of gas falls towards the super massive black hole in the center of a galaxy, it collides with other gas and is heated to extreme temperatures. This hot gas shines brightly and is known as a quasar. The thought was that when many galaxies are close together, a merger, two galaxies colliding and melding together, would create instabilities and cause gas to fall into the super massive black hole in one of the galaxies, creating a quasar. However, this relationship was not confirmed observationally due to the rarity of both quasars and protoclusters.

In order to understand protoclusters in the distant Universe a larger observational sample was needed. A team including astronomers from the National Astronomical Observatory of Japan, the University of Tokyo, the Graduate University for Advanced Studies, and other institutes is now conducting an unprecedented wide-field systematic survey of protoclusters using the Subaru Telescope's very wide-field camera, Hyper Suprime-Cam (HSC). By analyzing the data from this survey, the team has already identified nearly 200 regions where galaxies are gathering together to form protoclusters in the early Universe 12 billion years ago. 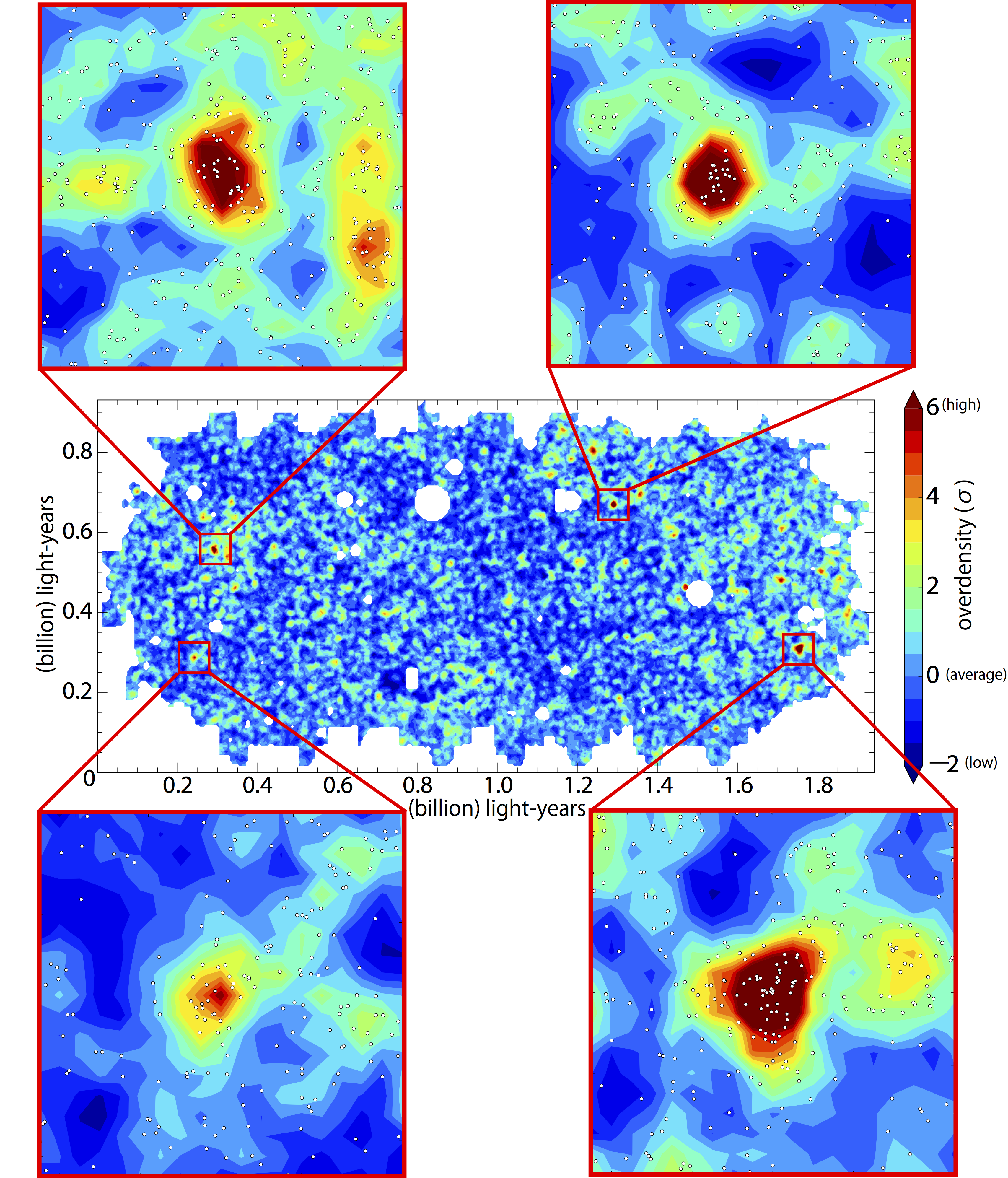 Figure 1: Galaxy distribution and close-ups of some protoclusters revealed by HSC. Higher- and lower-density regions are represented by redder and bluer colors, respectively. In the close-ups, white circles indicate the positions of distant galaxies. The red regions are expected to evolve into galaxy clusters. From the close-ups, we can see various morphologies of the overdense regions: some have another neighboring overdense region, or are elongated like a filament, while there are also isolated overdense regions. (Credit: NAOJ)

The team also addressed the relationship between protoclusters and quasars. The team sampled 151 luminous quasars at the same epoch as the HSC protoclusters and to their surprise found that most of those quasars are not close to the overdense regions of galaxies. In fact, their most luminous quasars even avoid the densest regions of galaxies. These results suggest that quasars are not a good proxy for protoclusters and more importantly, mechanisms other than galactic mergers may be needed to explain quasar activity. Furthermore, since they did not find many galaxies near the brightest quasars, that could mean that hard radiation from a quasar suppresses galaxy formation in its vicinity.

On the other hand, the team found two "pairs" of quasars residing in protoclusters. Quasars are rare and pairs of them are even rarer. The fact that both pairs were associated with protoclusters suggests that quasar activity is perhaps synchronous in protocluster environments. "We have succeeded in discovering a number of protoclusters in the distant Universe for the first time and have witnessed the diversity of the quasar environments thanks to our wide-and-deep observations with HSC," says the team's leader Nobunari Kashikawa (NAOJ).

Figure 2: The two quasar pairs and surrounding galaxies. Stars indicate quasars and bright (faint) galaxies at the same epoch are shown as circles (dots). The galaxy overdensity with respect to the average density is shown by the contour. The pair members are associated with high density regions of galaxies. (Credit: NAOJ)