Using the Subaru Telescope, the Hyper Suprime-Cam (HSC) survey collaboration team has made and analyzed the deepest wide field map of the three-dimensional distribution of matter in the Universe. Led by Kavli Institute for the Physics and Mathematics of the Universe (Kavli IPMU) Project Assistant Professor Chiaki Hikage, a team of scientists primarily from Japan including National Astronomical Observatory of Japan (NAOJ), Taiwan and Princeton University has used the gravitational distortion of images of about 10 million galaxies to make a precise measurement of the lumpiness of matter in the Universe. By combining this measurement with the European Space Agency Planck satellite's observations of the cosmic microwave background, and other cosmological experiments, the team has been able to further constrain the properties of the "dark energy" that dominates the energy density of the Universe. 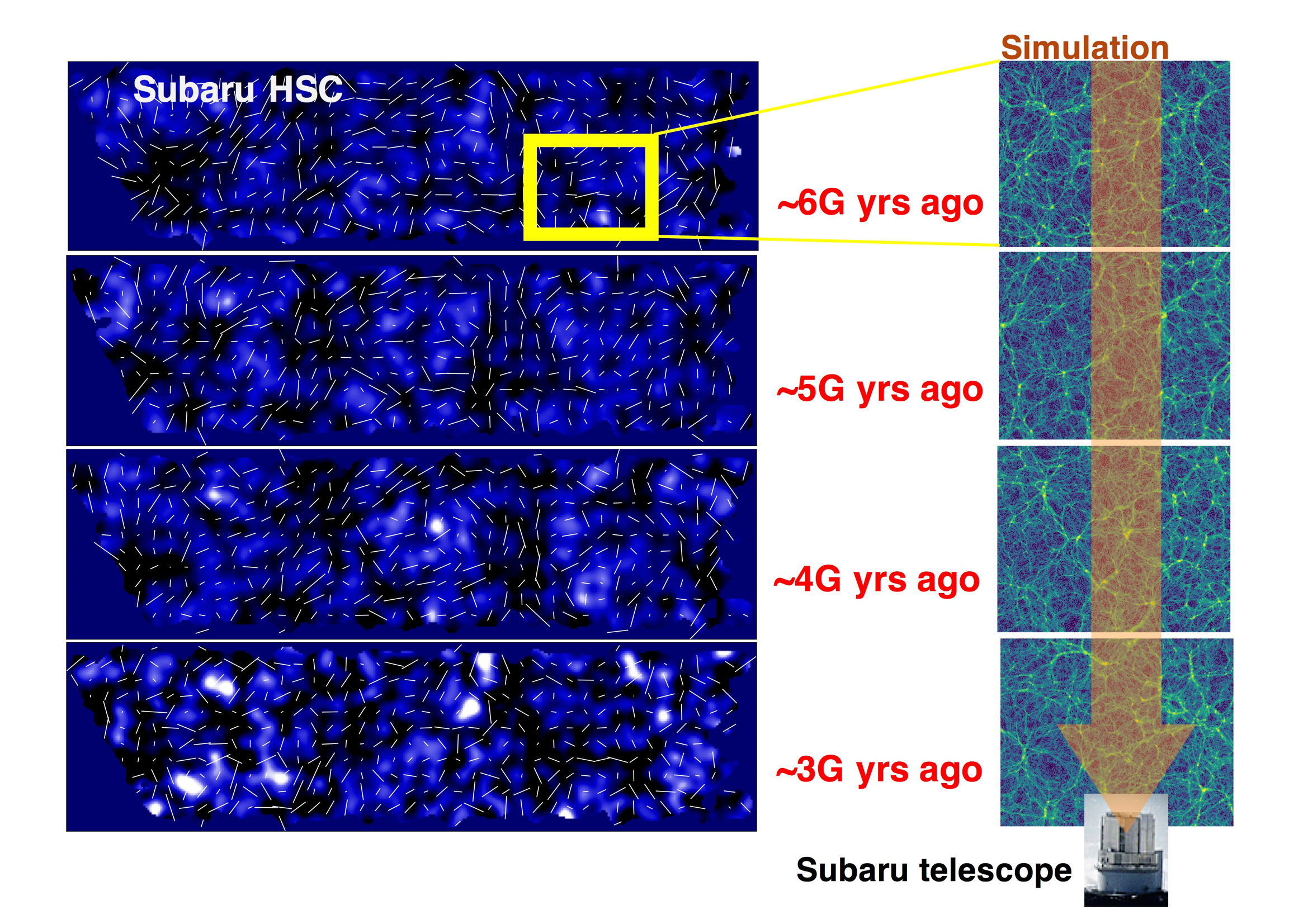 Figure 1: (Left) The 3-dimensional dark matter map of the Universe inferred from one of the six HSC observation areas is shown in the background with various shades of blue (brighter areas have more dark matter). The map was inferred from the distortions of shapes of galaxies in the HSC data which are indicated by white sticks. The stick lengths represent the amount of distortion and the angle of the stick corresponds to the direction of the distortion. (Right) The measurements are enabled by the light from distant galaxies that travels through the Universe and gets deflected by matter at different epochs in the Universe, before reaching the Subaru Telescope.(Credit: HSC Project/UTokyo)

Although dark matter cannot be directly seen, its gravitational effects, predicted by Albert Einstein's general theory of relativity, cause stretching and squeezing of the light from distant galaxies as they travel across the cosmos, to be detected by the Subaru Telescope. They are witness to the growth of cosmic structure (Figure 1, left) and can be used to unlock the mysteries of dark energy. The simplest model for dark energy was introduced by Einstein, termed the "Cosmological Constant." This model can explain all existing observations, including those of HSC.

The gravitational lensing effect from the distribution of dark matter in the Universe is quite weak, but results in small but measurable distortions in the images of the galaxies in the HSC images. Like a pointillist painting, the distorted images of millions of galaxies located at a range of distances paint a three-dimensional picture of the distribution of matter in the Universe (Figure 1, right). The HSC research team has precisely characterized the fluctuations or lumpiness of the distribution of dark matter, and the change in that lumpiness over billions of years - from its adolescence to adulthood. This lumpiness is a key parameter that describes how structure in the universe grew from its initial smooth beginnings after the Big Bang to the galaxies, stars and planets we see today.

With the high-precision HSC data, the team measured the lumpiness with a precision of 3.6% (Figure 2), which is similar to the precision with which it has been measured by other lensing surveys. These other surveys, including the Dark Energy Survey (DES) carried out on the Victor Blanco Telescope in Chile, surveyed brighter and thus nearer-by galaxies than did the HSC; the consistency of results at different distances and thus cosmic epochs gives confidence in the robustness of the results. 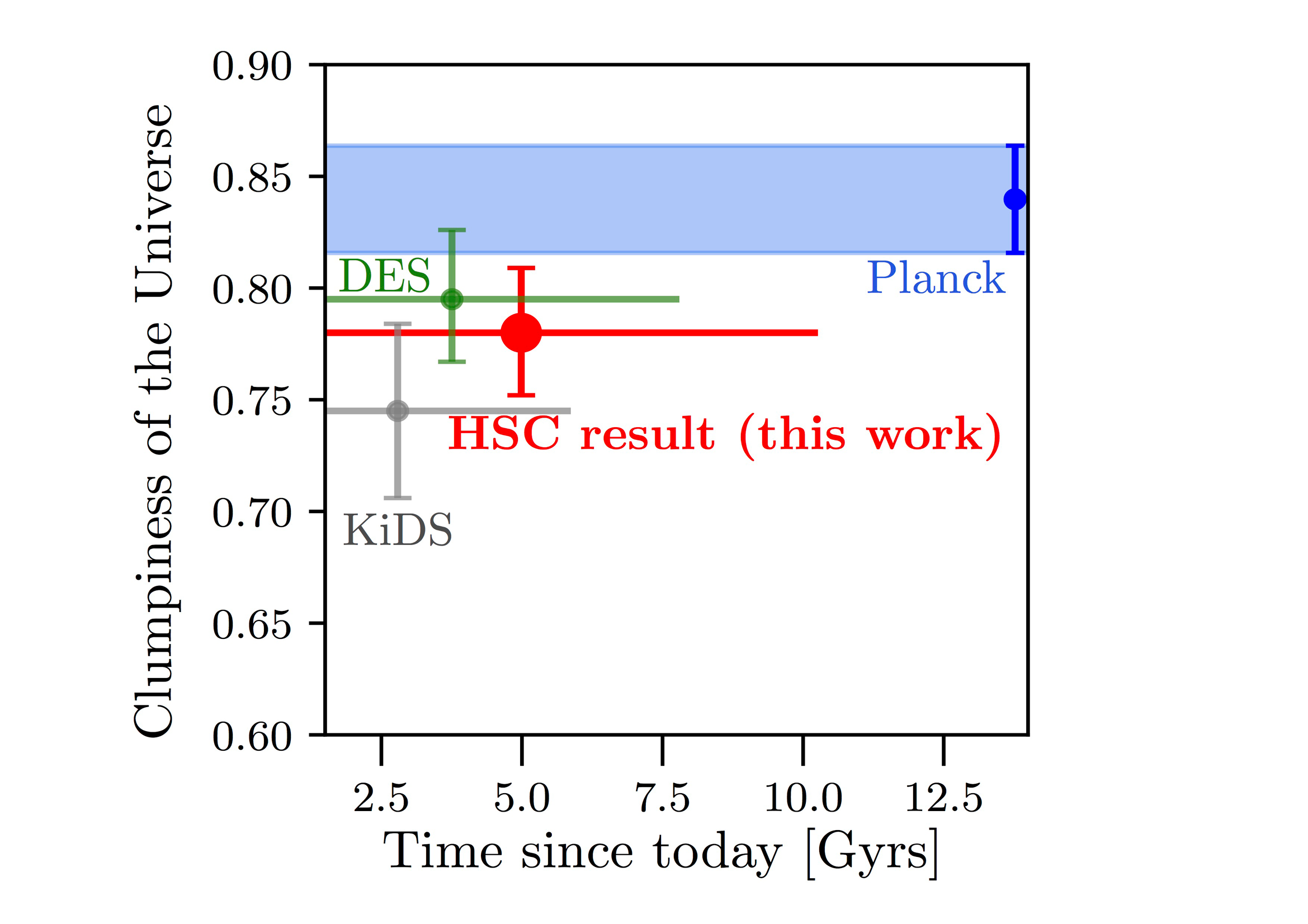 Figure 2: The cosmological constraints on the clumpiness of the Universe today (S8) predicted using observations at different times in the Universe. The HSC measurement of the clumpiness of the Universe is shown with the red symbol and are among the farthest measurements using weak gravitational lensing. These should be compared with the Planck results obtained from observations of the cosmic microwave background in the very early Universe and other contemporary weak lensing experiments the Kilo Degree Survey (KiDS) and DES. (Credit: HSC Project/UTokyo)

When compared to the fluctuations expected from those seen in the Universe's infancy by the Planck satellite, the HSC measurements offer a consistent picture of the cosmological model (Figure 3). The Universe today is dominated by dark matter and dark energy, and that dark energy behaves like Einstein's cosmological constant (Figure 4). 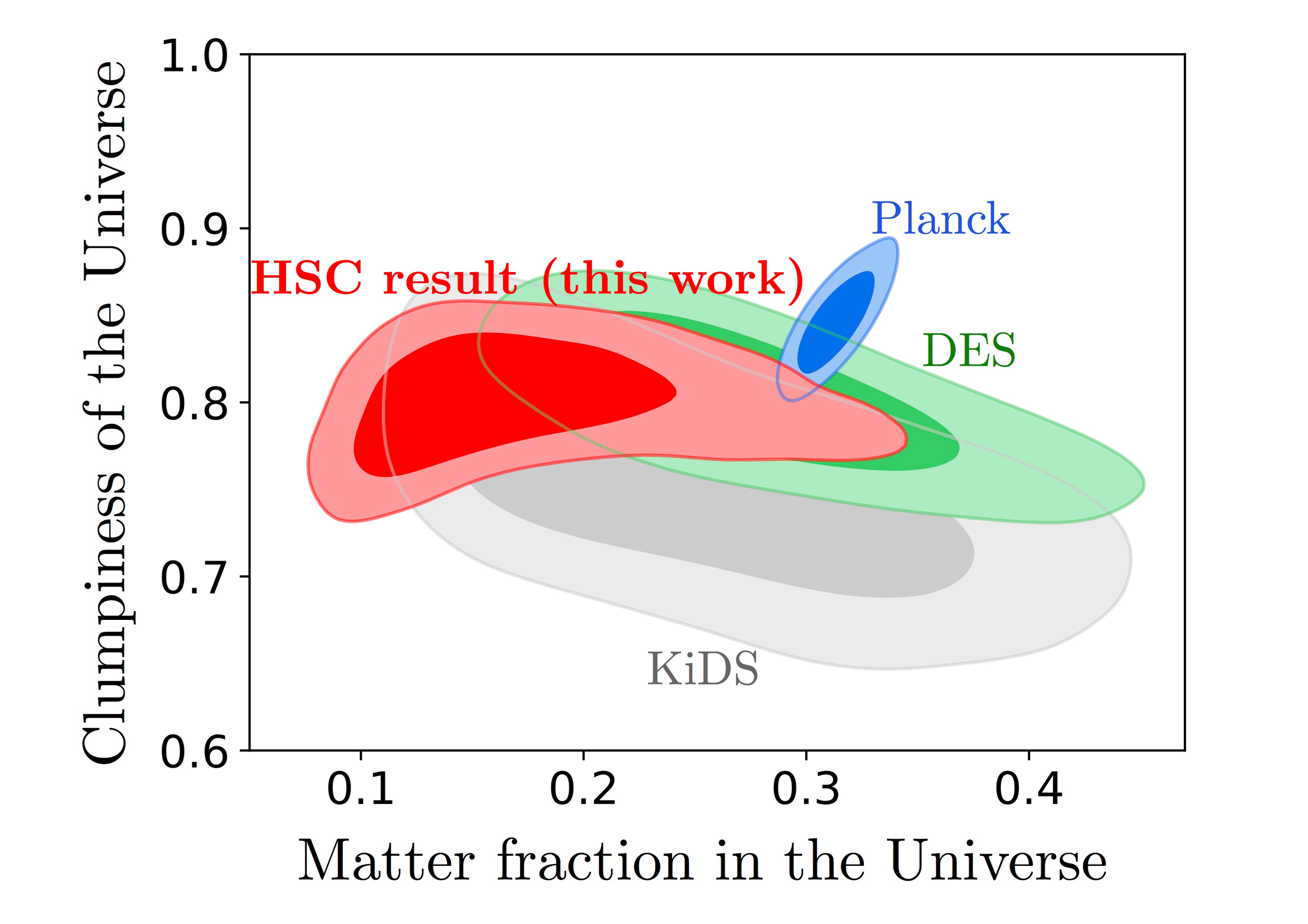 Figure 3: The cosmological constraints on the fractional contribution of matter to the energy budget of the Universe (rest of it corresponds to dark energy), and the clumpiness of the matter distribution today (S8), as inferred from the analysis of the 3d dark matter map. The results of the clumpiness of the matter distribution from HSC observations of the distant Universe using weak gravitational lensing are consistent with results from other similar observations (DES and KiDS) of slightly nearby Universe. The results from the cosmic microwave background observations during the Universe's infancy obtained by the Planck satellite are shown in blue. (Credit: HSC Project) 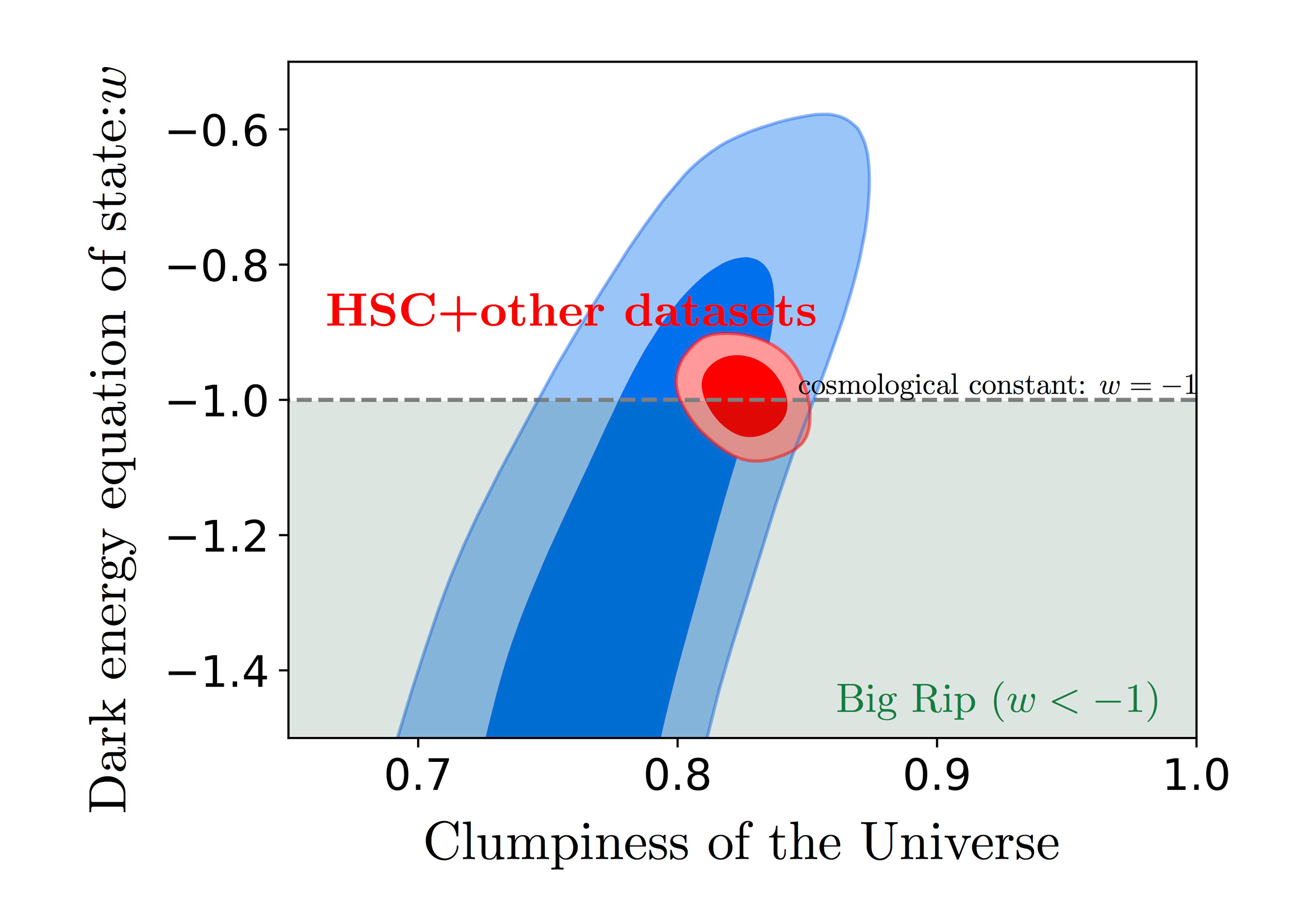 However, taken together the results from weak lensing surveys prefer a slightly smaller value of fluctuations than that predicted by the Planck satellite (Figure 5). This could just be a statistical fluctuation due to the limited amount of data available, or might be a signature of the breakdown of the standard model of the Universe, based on General Relativity and the cosmological constant. 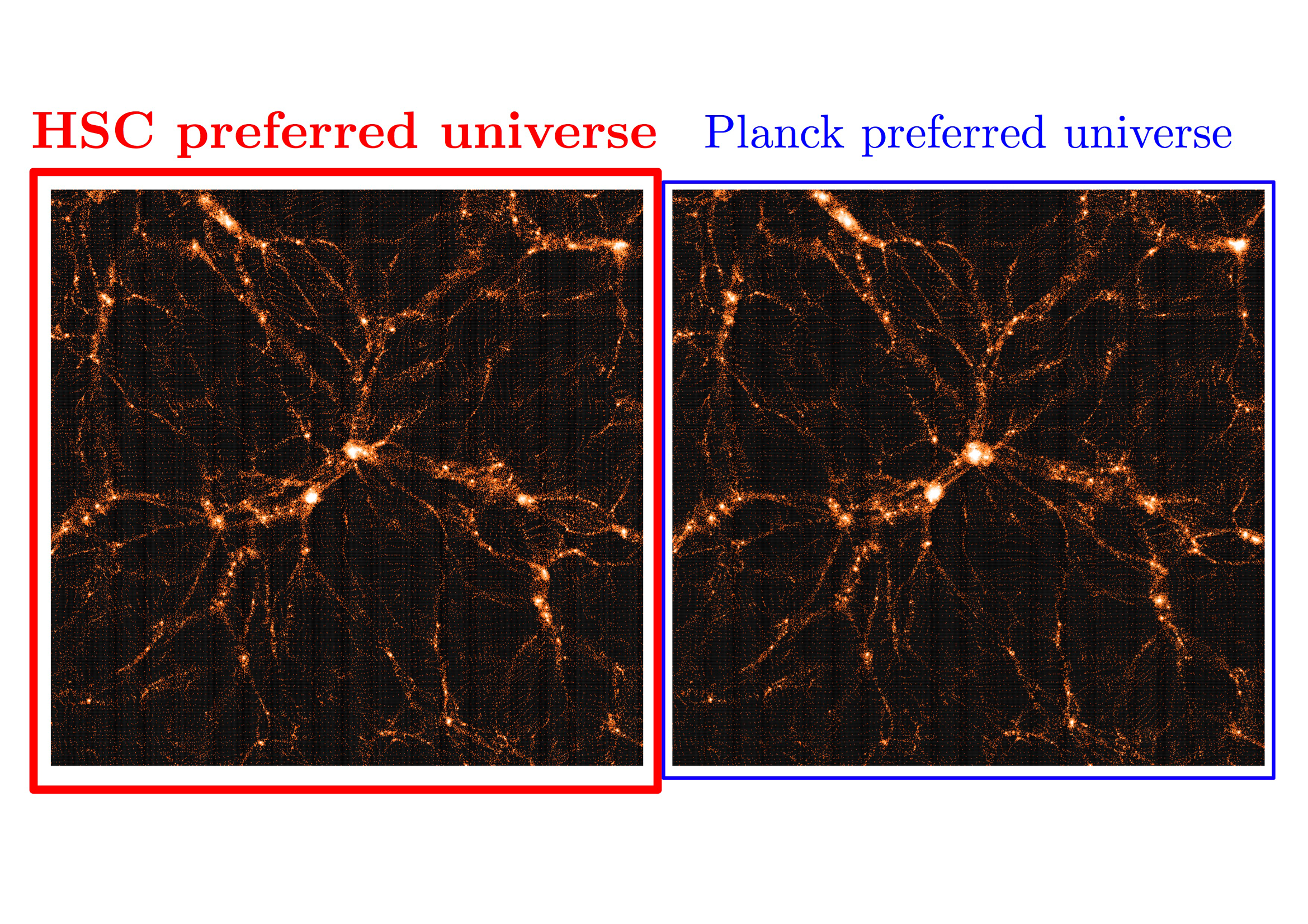 Figure 5: The weak lensing surveys such as HSC prefer a slightly less clumpy Universe than that predicted by Planck. The pictures show the slight but noticeable difference as expected from large computer simulations. Is this difference a statistical fluctuation? Astronomers all around the world continue to collect more and more data to answer this question. (Credit: UTokyo, Image provided by Kavli IPMU Project Assistant Professor Takahiro Nishimichi)

The HSC team conducted the HSC survey using the Subaru Telescope on the summit of Maunakea, one of the best astronomical sites in the world. The combination of a large primary mirror with a diameter of 8.2 meters, a wide field camera that can observe the area of 9 full moons in a single shot, and superb image quality producing sharp images of each galaxy, makes the telescope well suited to conduct a wide yet deep imaging survey of the sky. The survey has covered about 140 square degrees of sky (the area of 3000 full moons) over 90 nights.

The study required precise measurements of the shapes of galaxies. Since the weak lensing effect is quite small, the HSC team had to control various problems affecting the measurement of shapes, such as distortions due to the atmosphere and the instrument itself. The team overcame these difficulties by using detailed image simulations of the HSC survey based on images from the Hubble Space Telescope.

When carrying out precise measurements of very small effects like weak lensing, it is known that people have a tendency to decide that their analysis is complete if their results confirm earlier results. The HSC team performed a so-called blind analysis of their data in order to avoid such 'confirmation bias." They carried out many tests of their catalogs for more than a year without ever seeing the actual values of cosmological parameters from their analysis or comparing with results from other experiments, waiting until they were completely satisfied with their results before allowing themselves to examine their cosmological implications.

The HSC survey is on-going, the new HSC results come from a mere one tenth of the final survey. Upon completion, the survey will put considerably tighter constraints on cosmological parameters, deepening our understanding and further testing our understanding of both dark matter and dark energy.

HSC lead developer, Dr. Satoshi Miyazaki, from NAOJ's Advanced Technology Center, commented on the new work based on the HSC data. "This paper is a very important milestone of the HSC project where we have peer reviews on the data analysis package to determine cosmological parameters. At the same time, it also demonstrates the quality of the HSC data compared with those of other projects. Scientifically, the result is very exciting because it is consistent with what we have shown in February 2018 suggesting that the number of dark matter halo is less than the expectation based on a standard cosmological model."