A research team of multiple institutes, including the National Astronomical Observatory of Japan and University of Tokyo, released an unprecedentedly wide and sharp dark matter map based on the newly obtained imaging data by Hyper Suprime-Cam on the Subaru Telescope. The dark matter distribution is estimated by the weak gravitational lensing technique (Figure 1, Movie). The team located the positions and lensing signals of the dark matter halos and found indications that the number of halos could be inconsistent with what the simplest cosmological model suggests. This could be a new clue to understanding why the expansion of the Universe is accelerating.

Figure 1: 2 dimensional dark matter map estimated by weak lensing technique. The dark matter is concentrated in dense clumps. We can identify massive dark matter halos (indicated by oranges circles). The area shown in this figure is approximately 30 square degrees (a total of 160 square degrees were observed this time). The distribution map without the orange circles is available here. (Credit: NAOJ/University of Tokyo)

Mystery of the accelerated Universe

In the 1930's, Edwin Hubble and his colleagues discovered the expansion of the Universe. This was a big surprise to most of the people who believed that the Universe stayed the same throughout eternity. A formula relating matter and the geometry of space-time was required in order to express the expansion of the Universe mathematically. Coincidentally, Einstein had already developed just such a formula. Modern cosmology is based on Einstein's theory for gravity.

It had been thought that the expansion is decelerating over time (blue and red lines in Figure 2) because the contents of the Universe (matter) attract each other. But in the late 1990's, it was found that the expansion has been accelerating since about 8 Giga years ago. This was another big surprise which earned the astronomers who found the expansion a Nobel Prize in 2011. To explain the acceleration, we have to consider something new in the Universe which repels the space. 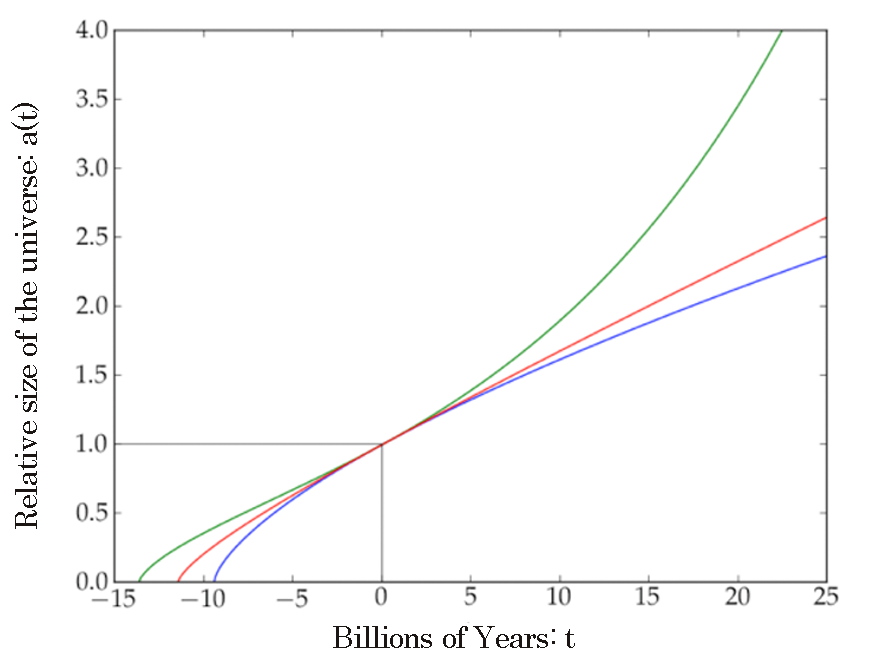 Figure 2: Expansion history of the Universe. The blue line shows what was believed to be likely in the early days of cosmology. Later this cosmological model fell out of favor because it predicts a higher growth rate and more structures, inconsistent with the observed galaxy distribution. Thus a much lighter Universe model was proposed which is shown by the red line. This light model also solved the so called "age problem," the existence of globular clusters older than the age of the Universe predicted by the blue track. But both the blue and red lines conflict with the inflation cosmology. Later when the acceleration of the Universe was discovered, LCDM represented by the green track, was adopted as the most likely model. Thanks to the addition of the cosmological constant, LCDM becomes consistent with the inflation model. (Credit: NAOJ)

The team is leading a large scale imaging survey using Hyper Suprime-Cam (HSC) to probe the mystery of the accelerating Universe. The key here is to examine the expansion history of the Universe very carefully.

In the early Universe, matter was distributed almost but not quite uniformly. There were slight fluctuations in the density which can now be observed through the temperature fluctuations of the cosmic microwave background. These slight matter fluctuations evolved over cosmic time because of the mutual gravitational attraction of matter, and eventually the large scale structure of the present day Universe become visible. It is known that the growth rate of the structure strongly depends on how the Universe expands. For example, if the expansion rate is high, it is hard for matter to contract and the growth rate is suppressed. This means that the expansion history can be probed inversely through the observation of the growth rate.

It is important to note that growth rate cannot be probed well if we only observe visible matter (stars and galaxies). This is because we now know that nearly 80 % of the matter is an invisible substance called dark matter. The team adopted the 'weak gravitation lensing technique.' The images of distant galaxies are slightly distorted by the gravitational field generated by the foreground dark matter distribution. Analysis of the systematic distortion enables us to reconstruct the foreground dark matter distribution.

This technique is observationally very demanding because the distortion of each galaxy is generally very subtle. Precise shape measurements of faint and apparently small galaxies are required. This motivated the team to develop Hyper Suprime-Cam. They have been carrying out a wide field imaging survey using Hyper Suprime-Cam since March 2014. At this writing in February 2018, 60 % of the survey has been completed. 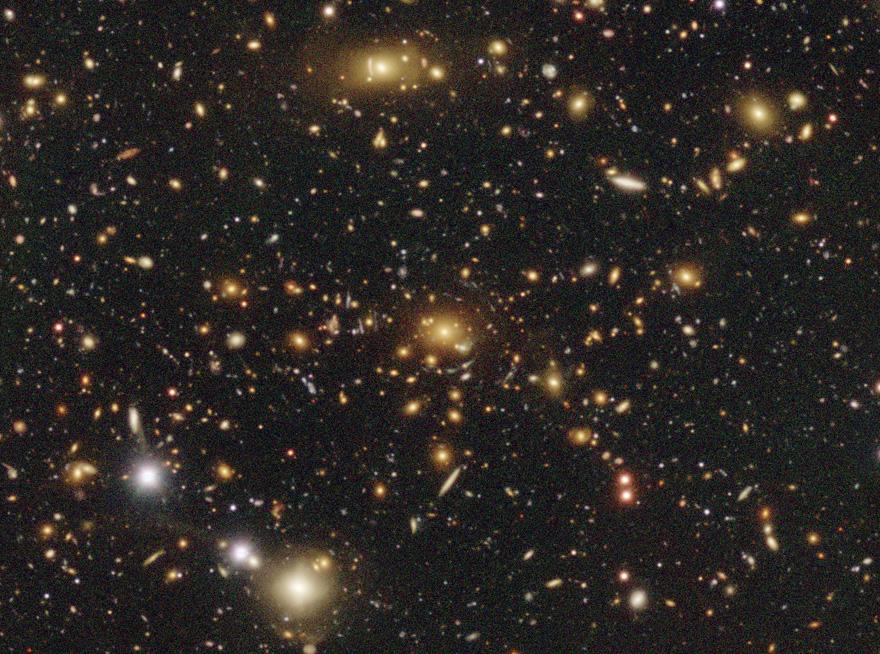 Figure 3: Hyper Suprime-Cam image of a location with a highly significant dark matter halo detected through the weak gravitational lensing technique. This halo is so massive that some of the background (blue) galaxies are stretched tangentially around the center of the halo. This is called strong lensing. (Credit: NAOJ)

In this release, the team presents the dark matter map based on the imaging data taken by April 2016 (Figure 1). This is only 11 % of the planned final map, but it is already unprecedentedly wide. There has never been such a sharp dark matter map covering such a wide area.

Imaging observations are made through five different color filters. By combining these color data, it is possible to make a crude estimate of the distances to the faint background galaxies (called photometric redshift). At the same time, the lensing efficiency becomes most prominent when the lens is located directly between the distant galaxy and the observer. Using the photometric redshift information, galaxies are grouped into redshift bins. Using this grouped galaxy sample, dark matter distribution is reconstructed using tomographic methods and thus the 3D distribution can be obtained. Figure 4 shows one such example. Data for 30 square degrees are used to reconstruct the redshift range between 0.1 (~1.3 G light-years) and 1.0 (~8 G light-years). At the redshift of 1.0, the angular span corresponds to 1.0 G x 0.25 G light-years. This 3D dark matter mass map is also quite new. This is the first time the increase in the number of dark matter halos over time can be seen observationally. 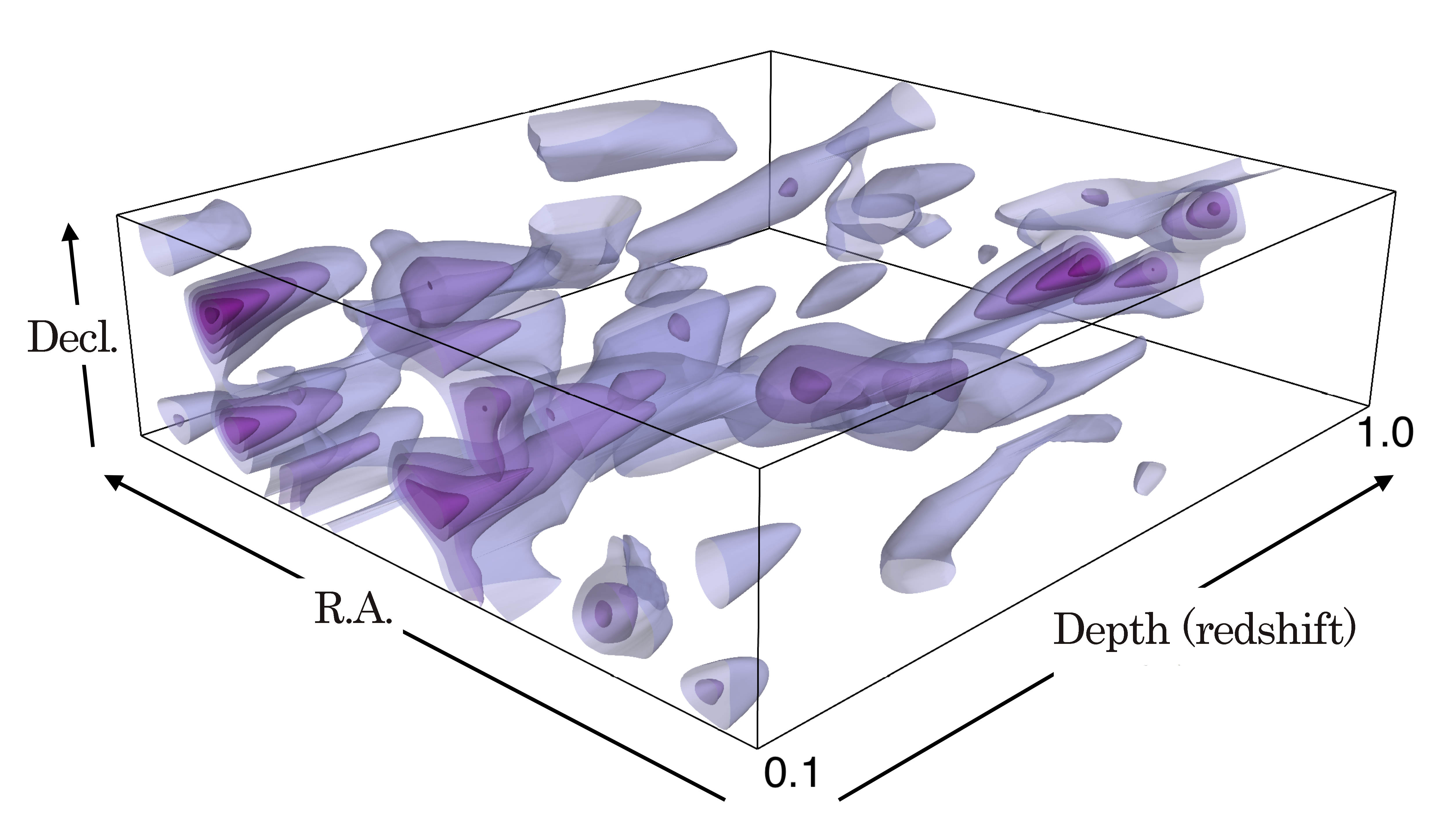 Figure 4: An example of 3D distribution of dark matter reconstructed via tomographic methods using the weak lensing technique combined with the redshift estimates of the background galaxies. All of the 3D maps are available here. (Credit: University of Tokyo/NAOJ)

What the dark matter halo count suggests and future prospects

The team counted the number of dark matter halos whose lensing signal is above a certain threshold. This is one of the simplest measurements of the growth rate. The histogram (black line) in Figure 5 shows the observed lensing signal strength versus the number of observed halos whereas the model prediction is shown by the solid red line. The model is based on the standard LCDM model using the observation of cosmic microwave background as the seed of the fluctuations. The figure suggests that the number count of the dark matter halos is less than what is expected from LCDM. This could indicate there is a flaw in LCDM and that we might have to consider an alternative rather than the simple cosmological constant (Note 1). 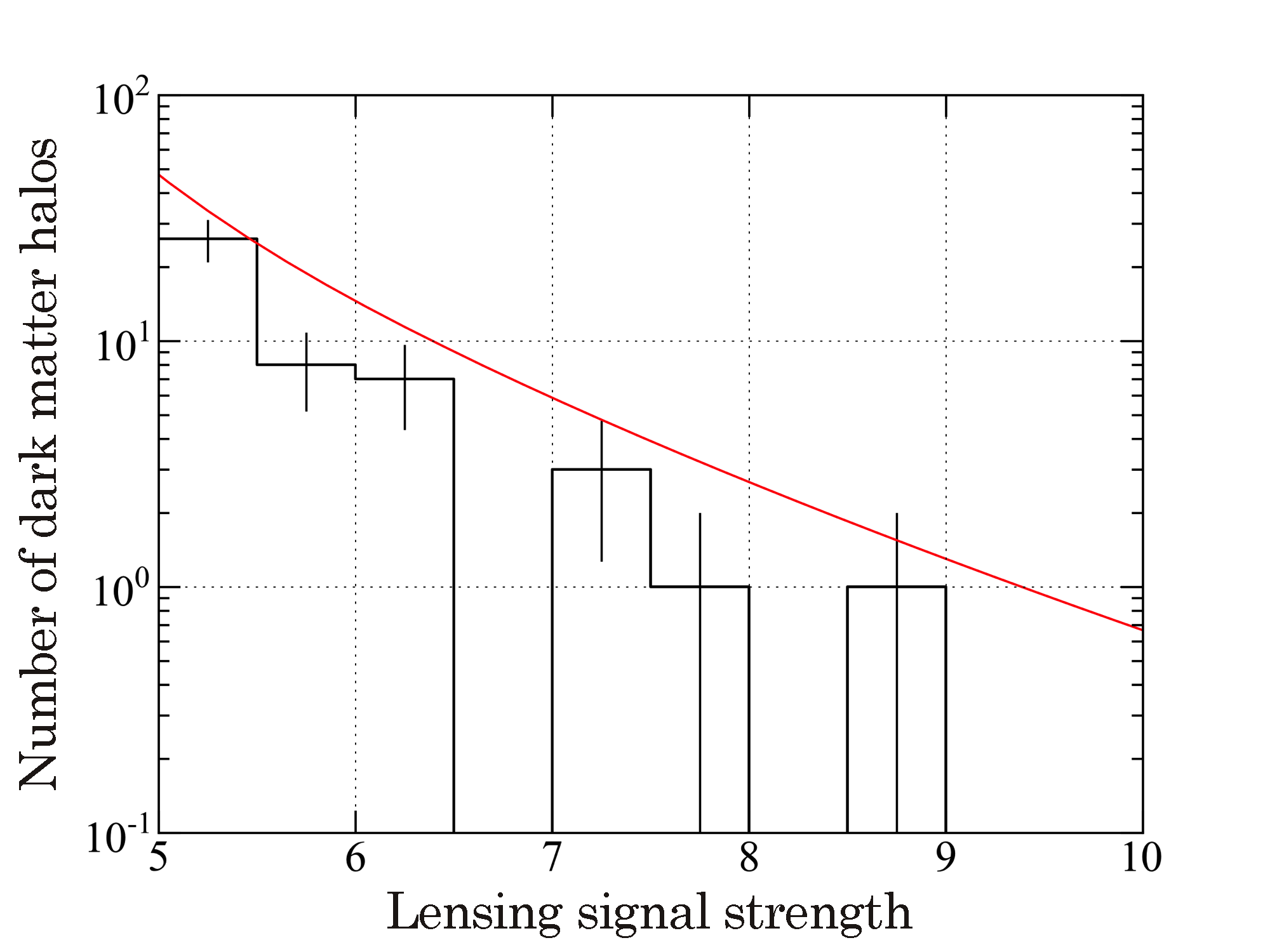 Figure 5: Number of dark matter halos versus their lensing signal strength (black histogram) and number count expected from LCDM and the most recent CMB observation by the Planck satellite. (Credit: NAOJ/University of Tokyo)

The statistical significance is, however, still limited as the large error bars (vertical line on the histogram in Figure 5) suggest. There has been no conclusive evidence to reject LCDM, but many astronomers are interested in testing LCDM because discrepancies can be a useful probe to unlock the mystery of the accelerating Universe. Further observation and analysis are needed to confirm the discrepancy with higher significance. There are some other probes of the growth rate and such analysis are also underway (e.g. angular correlation of galaxy shapes) in the team to check the validity of standard LCDM.

Note 1: Empty space is known to have energy caused by quantum effects and this is one candidate for the source of the cosmological constant. However, the energy density of the cosmological constant is many orders of magnitude weaker than what would be predicted based on this "vacuum energy" and it is hard to reconcile the discrepancy. Astronomers started to consider the existence of some other physical mechanism to explain the energy density, that concept is now called dark energy. The energy density can change over time in this generalization. If the dark energy was stronger in the past, the acceleration would have been more significant and suppressed the growth rate. This would result in fewer dark matter halos.