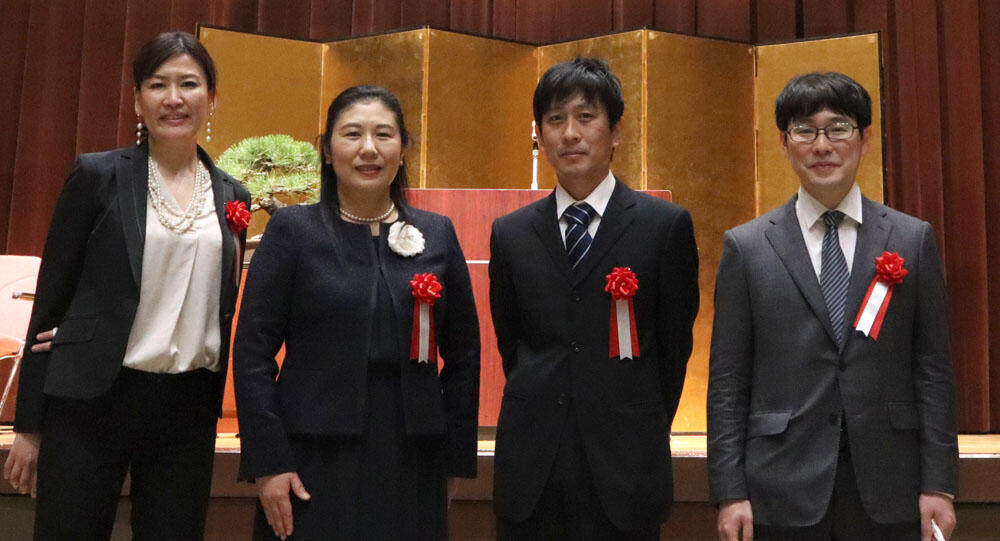 The GALAXY CRUISE members who received the Award for Science and Technology (Public Understanding Promotion Category). From left to right: Junko Shibata, Kumiko Usuda-Sato, Masayuki Tanaka, and Michitaro Koike. The photo was taken at the awards ceremony venue on April 14, 2021. (Credit: NAOJ)

Countless galaxies are captured in the vast cosmic images taken with Hyper Suprime-Cam (HSC), a giant digital camera with an extremely wide field of view, mounted on the Subaru Telescope. Many interacting galaxies with unique shapes are included among them. Studying the shapes of interacting galaxies and counting them allows us to unlock the secrets of galaxy evolution and understand galaxies' diversity. GALAXY CRUISE is a citizen science project of NAOJ in which Citizen Astronomers contribute to the classification of a multitude interacting galaxies. About a year and a half have passed since the Japanese site opened in November 2019. The English site opened in February 2020, and satisfactory classification results from many Citizen Astronomers are being amassed. Interesting research results are expected to come out soon through GALAXY CRUISE, in which Citizen Astronomers collaborate with professional scientists.

"We initiated this project rather cluelessly, but I came to realize that many Citizen Astronomers enjoy accessing the latest data and contributing to scientific research. I want to continue projects like GALAXY CRUISE in which non-professionals participate and recognize themselves as contributors to scientific activities," says Usuda-Sato, the helmsman of the "cruise ship," who leads the project.

"I think that this award recognizes the Citizen Astronomers along with us. I look forward to continuing my research with them," says Masayuki Tanaka, the cruise ship captain, who conducts research with the classification results.

"This is a great honor. I want to keep creating software that allows many people to enjoy the Universe," says Michitaro Koike, the cruise ship engineer who developed the classification website and big-data handling software.

"I am very honored to receive such an award. I want to continue exploring fun and easy-to-understand ways for everyone to feel closer to science and the Universe," says Junko Shibata, the architect of the cruise ship who designed the website.

The awards ceremony was held on April 14, 2021, at the MEXT building (Chiyoda Ward, Tokyo), with a limited number of attendees.