Artificial Intelligence &quotSwimming" in Big Data from the Subaru Telescope

A new program called SWIMMY, applying artificial intelligence to astronomical Big Data, has proven its ability to find interesting galaxies for follow-up study. SWIMMY has the advantage that rather than needing to be taught to identity unusual galaxies, it starts with the assumption that all galaxies are normal and flags ones that it can model correctly. This means it has the potential to find unique examples that the astronomers don’t yet know about, the so called "unknown unknowns." SWIMMY will help process Big Data coming out of the Subaru Telescope and other survey programs. 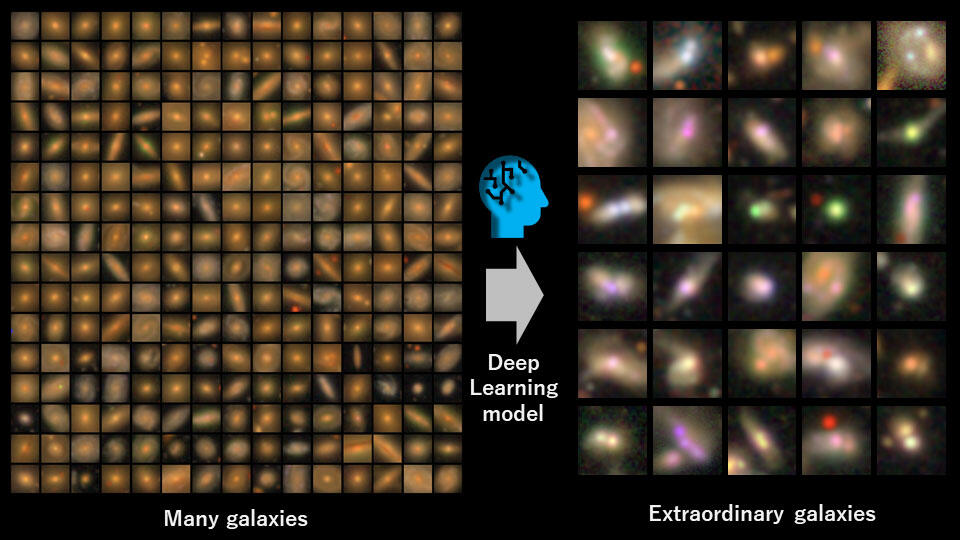 Thanks to the high-sensitivity, wide-field-of-view camera on the Subaru Telescope, astronomers are now "swimming" in high quality images of more than 500 million sources. Astronomical data is only going to increase as next-generation survey telescopes such as Vera C. Rubin Observatory and Nancy Grace Roman Space Telescope begin delivering data. The problem is now finding the most interesting galaxies for follow-up study.

To analyze the Big Data from Subaru Telescope observations, a research team led by the National Astronomical Observatory of Japan and the University of Tokyo created the SWIMMY (Subaru WIde-field Machine-learning anoMalY) survey program which uses "anomaly detection," a technique using artificial intelligence (AI) employed in industry and medical care. Other research groups are working to apply AI techniques to astronomy Big Data, but whereas other AIs require training data prepared by humans to learn what to look for, SWIMMY’s anomaly detection can take the straight data and look for "anomalies" which don’t follow the general trends.

In a test run on a known sample, SWIMMY flagged 12% of the input galaxies as "anomaly candidates," and caught about 60% of both quasars and extreme emission line galaxies (XELGs), two types of galaxies with unusual colors and shapes. Further investigation showed that the quasars and XELGs found by SWIMMY show more pronounced features than the examples missed by SWIMMY. This shows that SWIMMY has the potential to filter the most interesting examples out of Big Data.