Orphan Cloud in a Cluster of Galaxies

A large isolated gas cloud, more extended than the Milky Way Galaxy, was found in a cluster of galaxies by researchers at the University of Alabama Huntsville (UAH), National Astronomical Observatory of Japan, University of Milano-Bicocca, and other institutes. The large cloud consists of gases of different temperatures: X-ray emitting hot gas and optically visible ionized gas. This is the first discovery of such an isolated multi-temperature cloud in a cluster of galaxies. It raises new questions about the evolution of gas in a cluster environment.

Clusters of galaxies form the large-scale structure of the Universe. They consist of more than a hundred member galaxies, and are filled by hot plasma of about ten million degrees. Each member galaxy moves quickly, driven by the gravity of the cluster, but the hot plasma acts like a "head wind." The "wind" blows cold gas out of the galaxy to make a gas tail. Then, somehow, the gas tail is heated. When the temperature exceeds ten thousand degrees, the gas becomes ionized and it can be observed by its optical emission lines (recombination lines, e.g., H-alpha). Many such H-alpha tails have been discovered by the Subaru Telescope (Note 1).

An ionized gas cloud is thought to be unstable. If heating stops, it will cool back to cold gas. Meanwhile if heating continues, eventually it will become a hot plasma. In either case, H-alpha radiation won’t be emitted any more. The H-alpha "tail" is therefore transient and thought to be seen just after the gas departed from the parent galaxy. In fact, all the ionized gas clouds in the Coma Cluster were found near their parent galaxies.

A cloud found in the Leo Cluster by the Subaru Telescope challenges this understanding (Figure 1). The cloud, which astronomers call an "orphan cloud," exists at least 260,000 light-years from the nearest galaxy. As the speed of the gas departing from the galaxy would be less than 1000 km/s, the cloud has survived for at least 80 million years in the harsh cluster hot plasma, neither cooling down to a cold gas nor heating up to a hot plasma. 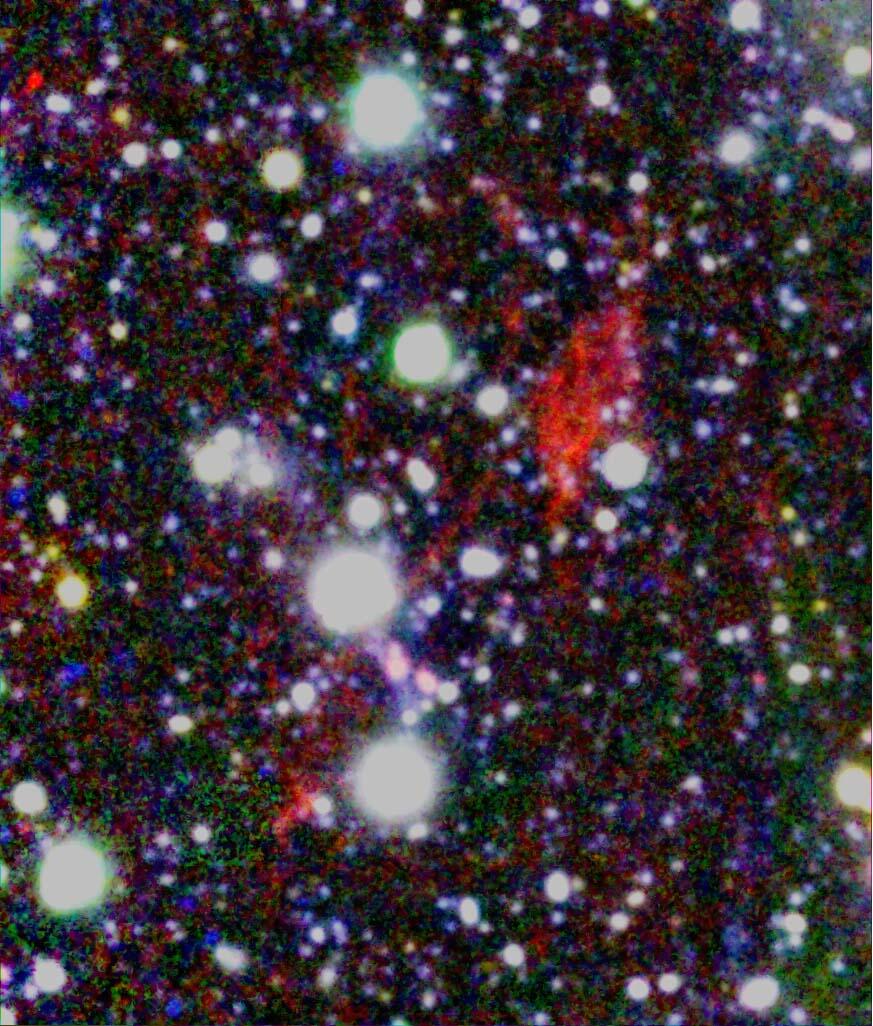 Figure 1: The "orphan cloud" observed with the Subaru Prime Focus Camera (Suprime-Cam). The gas cloud is shown as red in the figure. The figure is a false color composite of blue (B-band, 450 nm), green (R-band, 650 nm), and red (NA671 narrow-band filter, 672 nm) which corresponds to H-alpha's wavelength at the redshift of the Leo Cluster. (Credit: M.Yagi /NAOJ)

As a leader of an international team, Dr. Ming Sun at UAH took an interest in this object and observed it with the X-ray satellite XMM-Newton and also using optical spectroscopy (Note 2). The observations revealed that the H-alpha cloud found by the Subaru Telescope is only a tip of more extended X-ray emitting hot gas (Figure 2). The orphan cloud is a mixture of gases at different temperatures; X-ray emitting hot gas and H-alpha emitting ionized gas. The size of the hot gas cloud is larger than the Milky Way Galaxy. Figure 3 shows the whole Leo Cluster observed in X-rays. The orphan cloud is seen at the edge of the hot plasma of the cluster. The cloud is surrounded by the cluster's thin, hot gas. 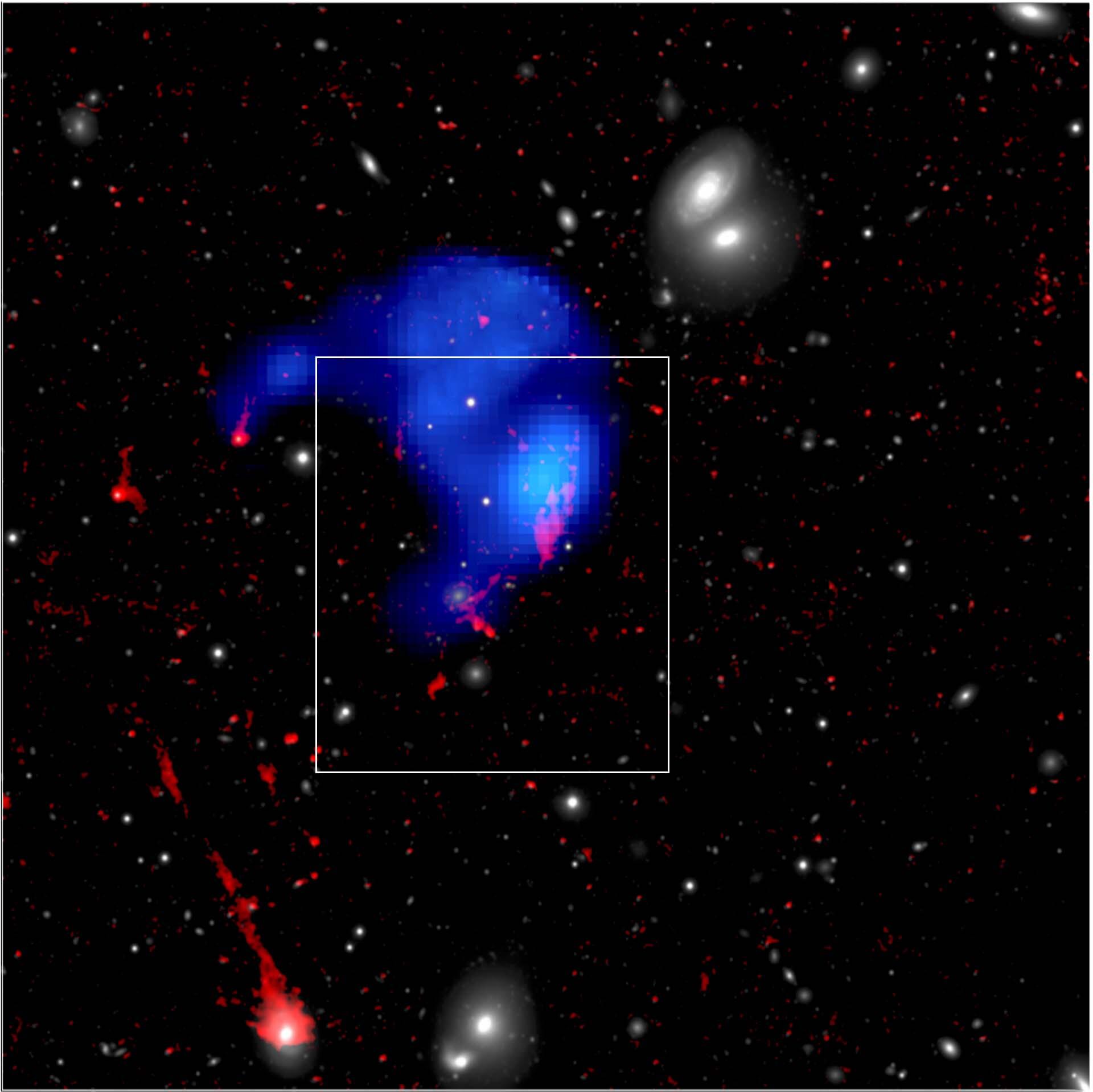 Figure 2: The "orphan cloud" observed in X-rays (blue) with XMM-Newton and H-alpha (red) observed with Suprime-Cam. The rectangle indicates the location of Figure 1. The background image shown in white was obtained with the Hyper Suprime-Cam on the Subaru Telescope. The spectroscopic observation showed that the nearest galaxies at the top-right cannot be the parent of the orphan cloud. An H-alpha tail from another galaxy is seen in the bottom-left. Details of the other smaller H-alpha clouds are to be studied. The figure is a false color composite of blue (0.5-2 keV), red (NA671-R narrow-band filter), and white (r-band, 650 nm). (Ge et al. 2021, Figure 1) 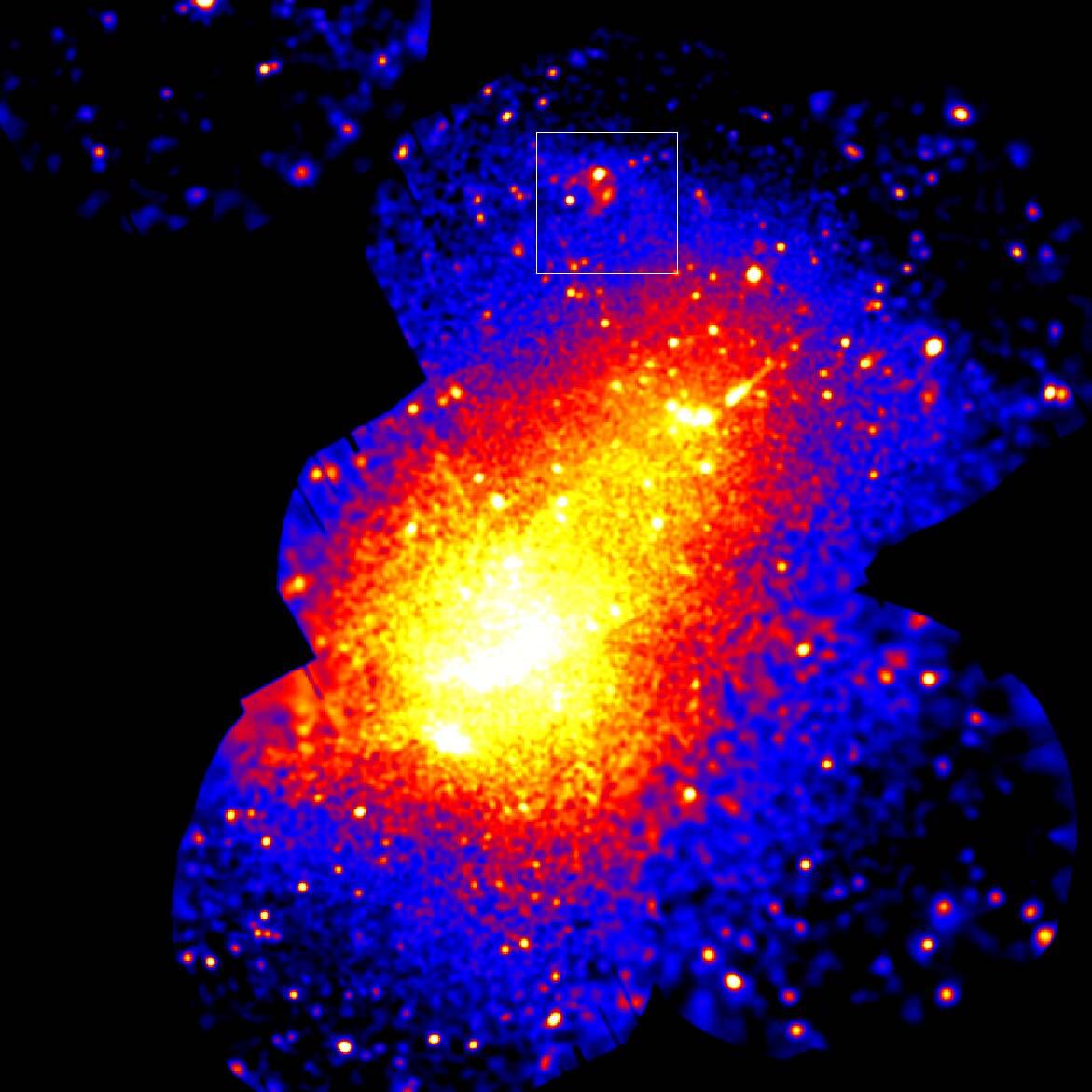 From the optical spectroscopy, more features about the cloud were clarified. The velocity of the cloud shows evidence that the cloud is in the Leo Cluster, but the apparently nearest galaxy has a different velocity and cannot be the parent. The metallicity of the cloud suggests that the gas would have been ejected from an evolved giant galaxy, but no such evolved giant galaxy is found around the cloud. The orphan has been wandering for much longer than 80 million years.

While the X-ray observation and the optical spectroscopy revealed several interesting aspects of this strange orphan cloud, they also raised new questions. One question is how the cloud has been heated. None of the previously assumed heating mechanisms were found to be consistent with the observed spectrum. Another mystery is that the gases at different temperatures have coexisted and floated in the ambient hot plasma for a long time. And the shape of the cloud, a relatively cooler ionized gas residing in part of a large hot cloud, is unexplained.

Until recently, the hot gas in a cluster of galaxies was thought to be distributed smoothly. However, if clumps like this orphan cloud can float for a long time without dissolving into the ambient gas, we should review the theories about the evolution of the cluster, and the galaxies travelling inside of the clumpy gas of the cluster. It is important to understand the physics behind the orphan cloud's shape and its longevity. The research team is planning imaging observations with higher spatial resolution and a radio observation of the cold gas.


This research was published in Monthly Notices of the Royal Astronomical Society on June 1, 2021 (Chong Ge, et al, "An H-alpha/X-ray orphan cloud as a signpost of intracluster medium clumping").