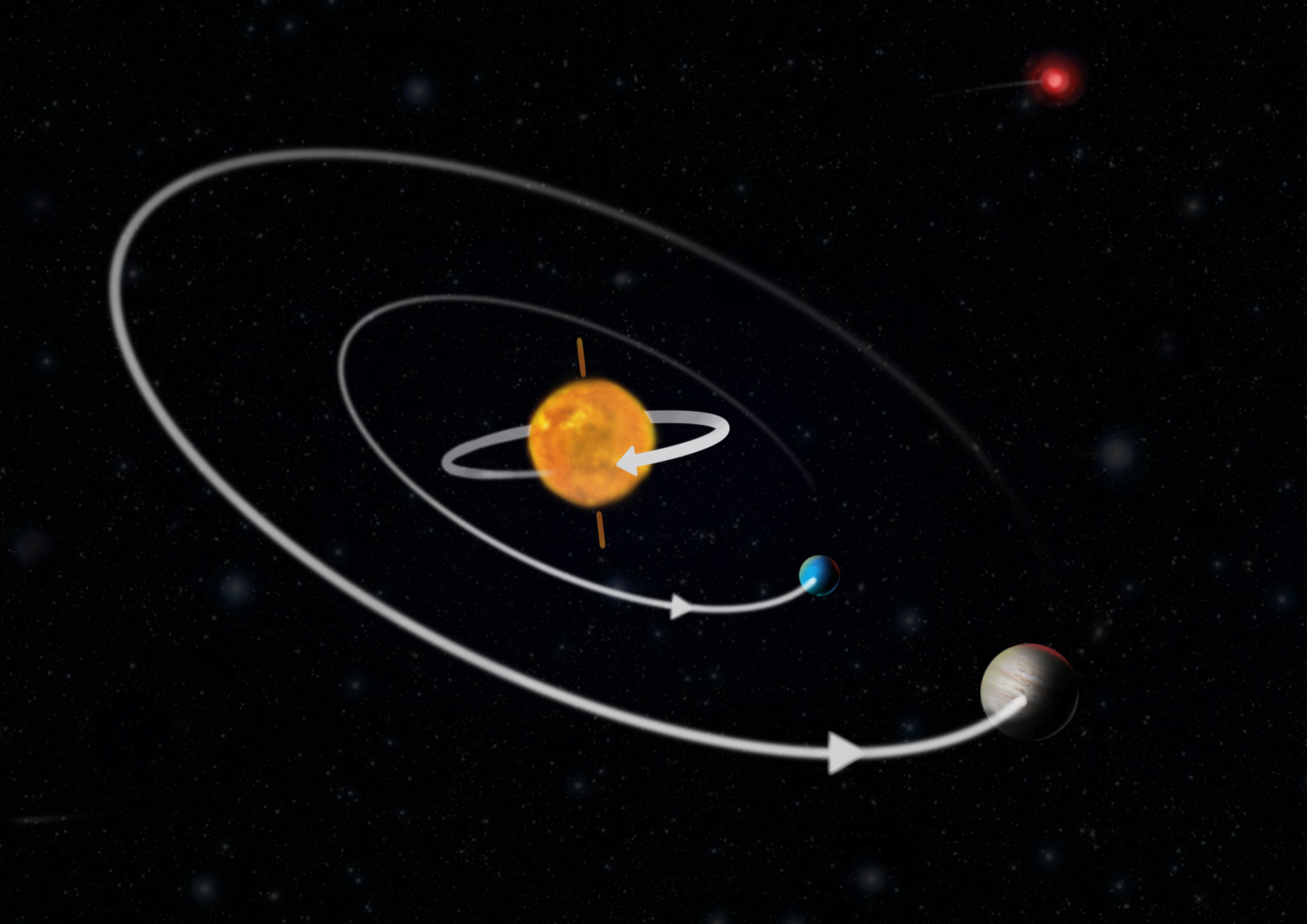 Figure 1: Conceptual illustration of the exoplanetary system K2-290. The central star (center) has two planets and a companion star (upper right). The two planets orbit around the central star in nearly the opposite direction to the star's spin. The innermost planet, about 75% the size of Neptune, orbits the star every nine days. The larger, Jupiter sized planet, requires more than 48 days for a round trip, still faster than Mercury in our own system with its 88 day orbit. (Credit: Christoffer Grønne/Aarhus University)

An international team including astronomers from Tokyo Institute of Technology and Aarhus University discovered evidence that in some cases protoplanetary disks, gas and dust disks surrounding young stars in which planets form, may have been flipped over, resulting in backwards or retrograde orbits of the planets. This finding is an important step in understanding planet formation and orbital evolution.

In the Solar System, the eight planets orbit in the same direction, this is also the same direction that the Sun rotates. Over the last decade researchers discovered that this is not always the case with exoplanets, planets which orbit around stars other than the Sun. Some exoplanets have orbits tilted wildly away from the rotation of the star. Some even have orbits tipped over backwards with respect to the central star. The mechanisms by which this wide diversity of orbits come to be is an important question in modern astronomy.

In one possible mechanism, while the planets are still forming in a protoplanetary disk of gas and dust around a young star, the gravity of a nearby companion star can tilt the disk so that the planets form on misaligned orbits from the beginning. Here, ‘nearby’ means within about a light-year. This disk-tilt mechanism was first proposed in 2012, but no confirmed examples had been observed until now.

The exoplanetary system, K2-290, is an ideal laboratory to test this disk-tilt mechanism. It has a nearby companion star identified by the Subaru Telescope (Note 1). It also has two planets with coplanar orbits, orbits that are aligned with each other. The presence of two planets with similar orbits is important because it rules out scenarios where interactions between the planets cause the orbits to tilt.

The team including Dr. Teruyuki Hirano (Tokyo Institute of Technology/National Institutes of Natural Sciences) and Dr. Maria Hjorth (Aarhus University/Tokyo Institute of Technology) used the Subaru Telescope and other telescopes (Note 2) to measure the misalignment between the orbits of the planets and the central star. They found that the planet’s orbits have flipped over nearly backwards. Numerical simulations by the team showed that the companion would have been able to flip over the protoplanetary disk, imparting retrograde orbits on the resulting planets. This provides strong evidence that the disk-tilt mechanism could be responsible for misaligned orbits, not just in this case, but in other exoplanet systems as well. It is no longer safe to assume that planetary orbits are initially aligned with the rotation of the star just after the formation of the planets in their disk. While other theories to explain spin-orbit misalignments in exoplanet systems tend to work best on large, Jupiter-like planets in short period orbits, the disk-tilt mechanism applies to planets of any size; even potentially habitable Earth-sized planets.


These results appeared as Hjorth et. al. "A backward-spinning star with two coplanar planets" in the Proceedings of the National Academy of Sciences of the United States of America on February 15, 2021.


Note 1: The companion star was discovered in 2018 using IRCS on the Subaru Telescope. The result appeared as Hjorth et al. "K2-290: a warm Jupiter and a mini-Neptune in a triple-star system" in Monthly Notices of the Royal Astronomical Society on January 15, 2019.

Note 2: The observations were made in 2019 using three high-dispersion spectrographs: HDS on the Subaru Telescope, HARPS-N on the Telescopio Nazionale Galileo, and ESPRESSO on the VLT. The alignments between the two planets' orbits and the star's rotation were measured using the Rossiter-McLaughlin (RM) effect. See "Inclined Orbits Prevail in Exoplanetary Systems" (press release on January 12, 2011) for other examples of misaligned exoplanet systems measured with the RM effect.