More than Meets the Eye: Complete Imaging of a Cluster Collision

A trio of world-leading observatories joined forces to observe colliding galaxy clusters and map their components, including dark matter and intracluster gas which can’t be seen with visible light. They found that the violence of the collision heats the intracluster gas to 400 million degrees centigrade. This is an important result for understanding the evolution of structure in the Universe. 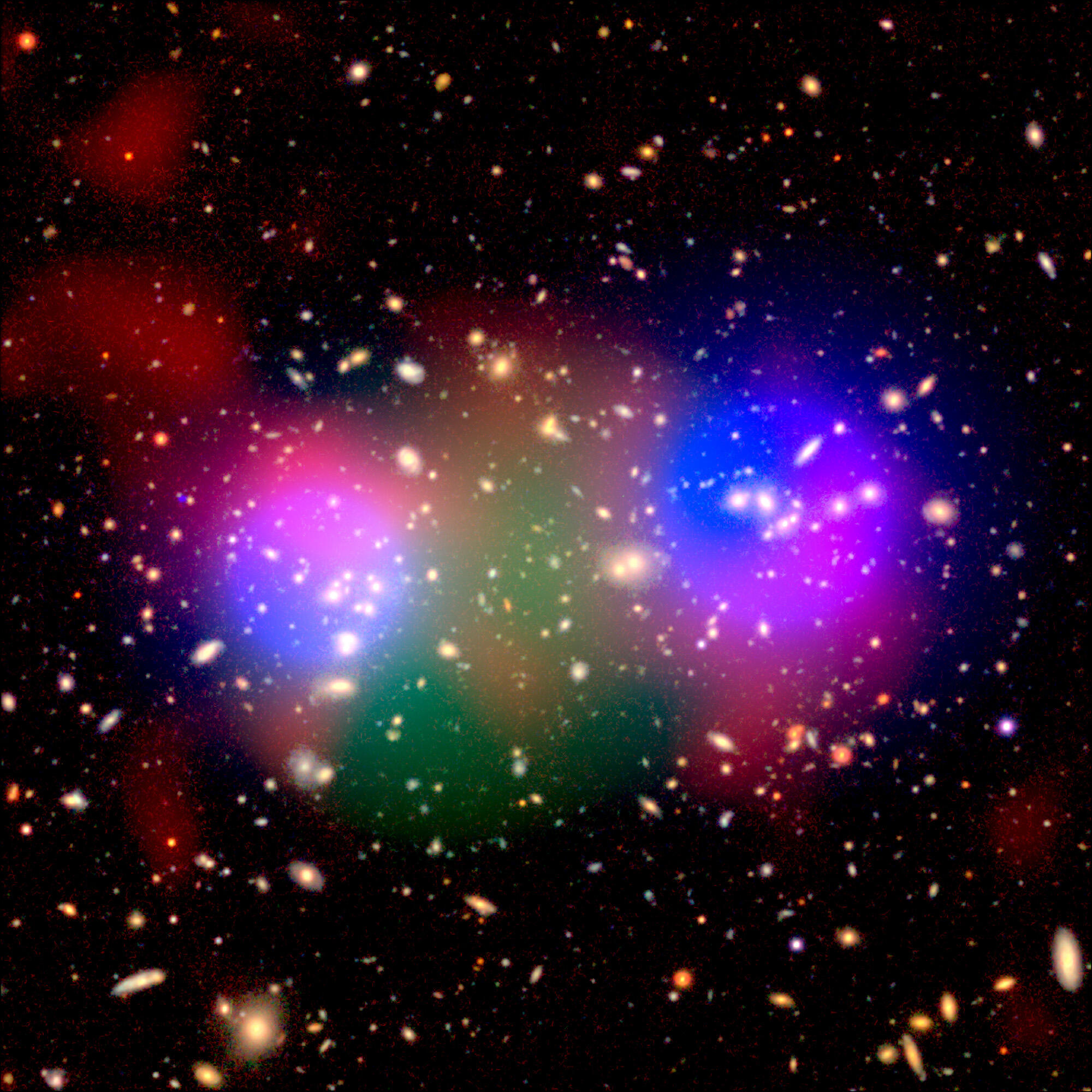 Space is a cold, lonely place so things like to group together. Stars group together into galaxies; galaxies gather together in clusters; and even galaxy clusters collide and merge into larger clusters. But the stars we can see only tell part of the story. Clusters also contain hot intracluster gas and dark matter. The various components behave differently during a collision, so to understand the complete picture we need to observe all of them.

The Subaru Telescope, the XMM-Newton X-ray Survey (XXL), and the Green Bank Telescope (GBT) teamed up to observe HSC J023336-053022 (XLSSC 105), a pair of colliding galaxy clusters. The Subaru Telescope captured the light from the stars in the cluster; XXL observed hot, thin gas; and the MUSTANG-2 receiver installed on the GBT observed high-pressure gas. The technological innovation of the GBT and MUSTANG-2 enabled observations of such a high-pressure gas with high resolution. Astronomers could infer the distribution of the invisible dark matter by using General Relativity to analyze the distortion of the shapes of background galaxies in the Subaru Telescope image. The data for these four components were combined to create a complete picture. The results show that the intracluster gas was originally 40 million degrees and the energy released in the collision raised the temperature by ten times in places. For reference, 400 million degrees centigrade is approximately 720 million degrees Fahrenheit, or about 27 times hotter than the core of the Sun. This agrees with predictions, suggesting that the numerical simulations of cluster collisions are accurate.

Lead researcher Nobuhiro Okabe comments, "None of the observatories alone could have achieved this collaborative result. The ongoing Subaru Telescope HSC-SSP Survey observing the wide and deep Universe provides us with a rare opportunity to discover many clusters undergoing collisions. We hope to carry out follow-up observations of such clusters in X-ray and radio bands in order to understand the details of structure formation of the Universe."


The Subaru Telescope Hyper Suprime-Cam (HSC) collaboration includes the astronomical communities of Japan and Taiwan, and Princeton University. The XXL is an international project based around an XMM-Newton Very Large Programme surveying two 25 deg2 extragalactic fields. The Green Bank Observatory is a facility of the National Science Foundation operated by Associated Universities, Inc., under a cooperative agreement with the National Science Foundation.