Galaxies in the Infant Universe were Surprisingly Mature

The survey, called the ALMA Large Program to Investigate C+ at Early Times (ALPINE), aimed at measuring the gas and dust in 118 distant galaxies, and involved the use of two Maunakea Observatories – Subaru Telescope and W. M. Keck Observatory - to obtain crucial measurements in the optical wavelength of galaxies over 12 billion light years away. That means the team looked back in time at these galaxies as they were just 1 to 1.5 billion years after the Big Bang when they were experiencing a growth spurt. To their surprise, they found galaxies might evolve faster than expected.

"We didn't expect to see so much dust and heavy elements in these distant galaxies," said ALPINE co-principal investigator Andreas Faisst of the California Institute of Technology.

Galaxies are considered more "mature" when they contain a significant amount of dust and heavy elements (defined by astronomers as all elements heavier than hydrogen and helium), which are considered to be by-products of dying stars. But galaxies in the early universe have not had much time to build stars yet, so astronomers expect them to be dust-poor and contain a low amount of heavy elements. They also generally expect them to look like train wrecks because early galaxies often collide with each other.

Instead, the team found many of the galaxies in the ALPINE survey showed relatively grown-up features, particularly a diversity in their structures including the first signs of rotationally supported disks, which may later lead to galaxies with a spiral structure as is observed in galaxies such as our Milky Way. 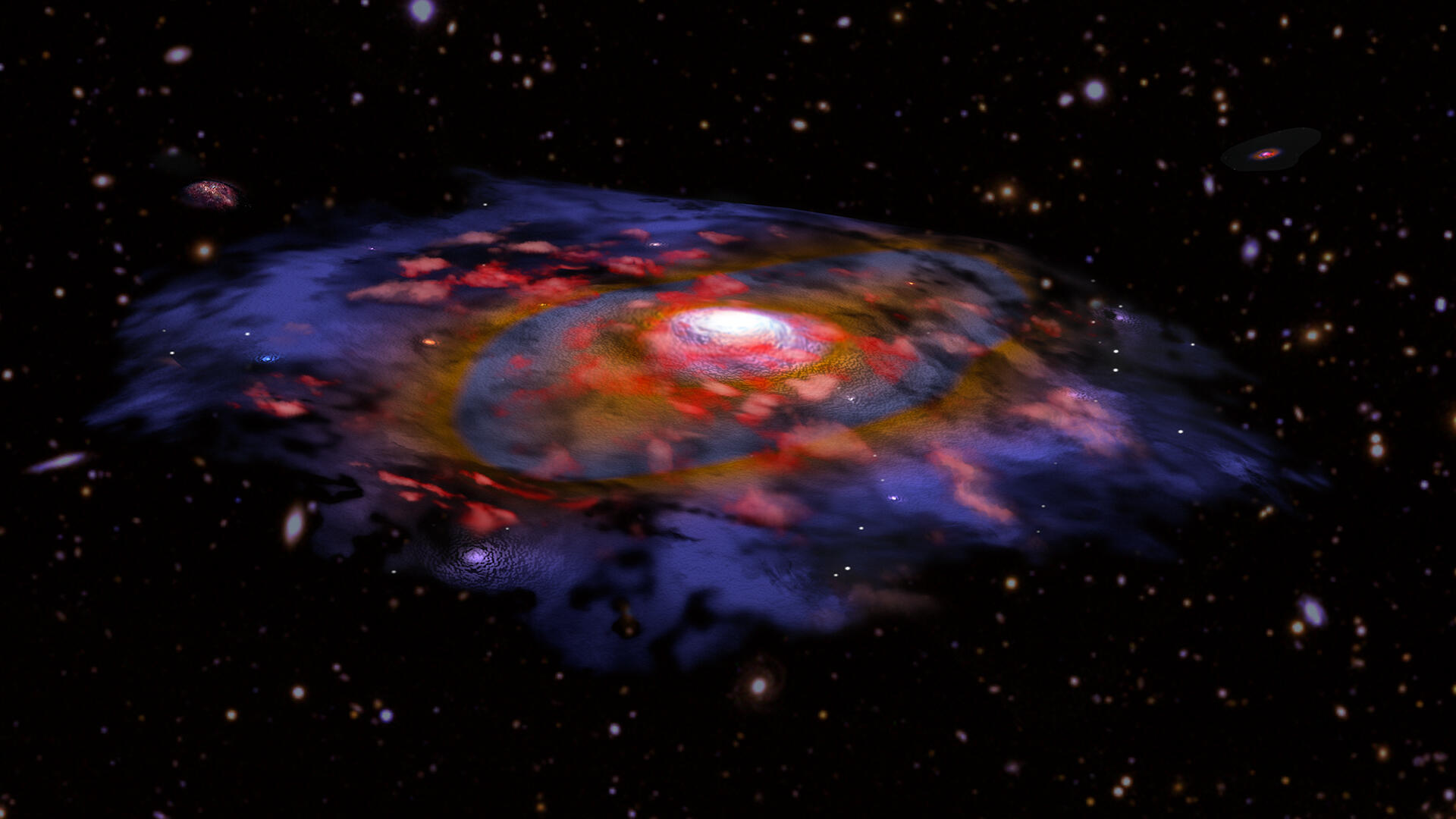 Figure 1: Artist's illustration of a galaxy in the early universe that is very dusty and shows the first signs of a rotationally supported disk. In this image, the red color represents gas, and blue/brown represents dust as seen in radio waves with ALMA. Many other galaxies are visible in the background, based on optical data from VLT and Subaru Telescope. (Credit: B. Saxton NRAO/AUI/NSF, ESO, NASA/STScI; NAOJ/Subaru)

"We see many galaxies that are colliding, but we also see a number of them rotating in an orderly fashion with no signs of collisions," said co-principal investigator John Silverman of the Kavli Institute for the Physics and Mathematics of the Universe in Japan.

ALPINE is the first and largest multi-wavelength survey of galaxies in the early universe. Multi-wavelength studies are needed to get the full picture of how galaxies form. In addition to data from Keck Observatory and Subaru Telescope (photometric data from Suprime-Cam and Hyper Suprime-Cam), the team also collected measurements in the optical (VISTA, Hubble, and VLT), infrared (Spitzer), and radio (ALMA). Such a large and complex survey is only possible thanks to the collaboration between multiple institutes across the globe.

To help solve the mystery as to how the galaxies grew up so fast and what may cause some of them to undergo collisions, in addition to ALPINE, astronomers, led by a team at UC Davis, are also conducting another survey called C3VO; by observing the large-scale environments of ALPINE and other galaxies in the young universe using Keck Observatory and Subaru Telescope, they hope to see the early stages of the formation of galaxy clusters. Such studies into the early universe provides astronomers a deeper understanding of how the galaxies that we see today are formed.


All ALPINE papers are dedicated in memory of Olivier Le Fèvre, principal investigator of ALPINE, who passed away in June.


A list of ALPINE publications to date can be found here (including eight articles published on October 27, 2020 in a special edition of the journal Astronomy & Astrophysics): http://alpine.ipac.caltech.edu/#publications