A team of astronomers using the Subaru Telescope has revealed a population of old and very metal-poor stars extensively surrounding the elliptical galaxy M105. The finding is important to further test the theory of formation of elliptical galaxies in galaxy groups, because these "free floating stars" are considered to be fossils proving that these groups form via extended processes through the continuous merging of smaller structures.

Galaxies are seldom found in isolation. Instead, most of them "live" in larger structures that are classified as groups or clusters, depending on their size and number of galaxies. How were these structures made? According to the standard cosmological model (Lambda-CDM model), these structures form hierarchically (bottom up), with smaller structures forming first and merging to form larger structures. Consequently, there must be a population of single stars unbound from the larger structures somewhere in the hierarchy. It then becomes important to find stars in the empty regions between galaxies that are in groups or clusters, and to determine through observations when the "free floating stars" began to appear and populate the surrounding space.

To identify a population of single stars scattered in a galaxy group, a team of astronomers, including members from the European Southern Observatory and the Max Plank Institute for Extraterrestrial Physics, studied the Leo I group at a distance of about 10 Mpc (33 million light-years), which is the closest group that contains all galaxy types (elliptical, spiral, and dwarf galaxies) with the elliptical galaxy M105 (NGC 3379) at its center.

The team used planetary nebulae (PNe) as tracers. PNe are the late stages of stars like our own Sun. In these stages, the central core becomes naked and the outer layers are expelled to form a nebula, that shines with a particular color, of aquamarine hue due to the oxygen [OIII] emission at 5007 Angstrom. A similar greenish color is also visible in the Earth's atmosphere as "northern lights." With the bright light from their envelopes, the dying stars are like beacons that astronomers can use to unveil the structure of the outermost regions of the galaxy M105.

The team used Suprime-Cam on the Subaru Telescope together with the Planetary Nebula Spectrograph (PN.S) mounted on the William Herschel Telescope, to carry out a complete census in the outer regions of M105. Figure 1 shows the distribution of PNe detected in the observed fields. Blue circles highlight the detections made with Suprime-Cam. 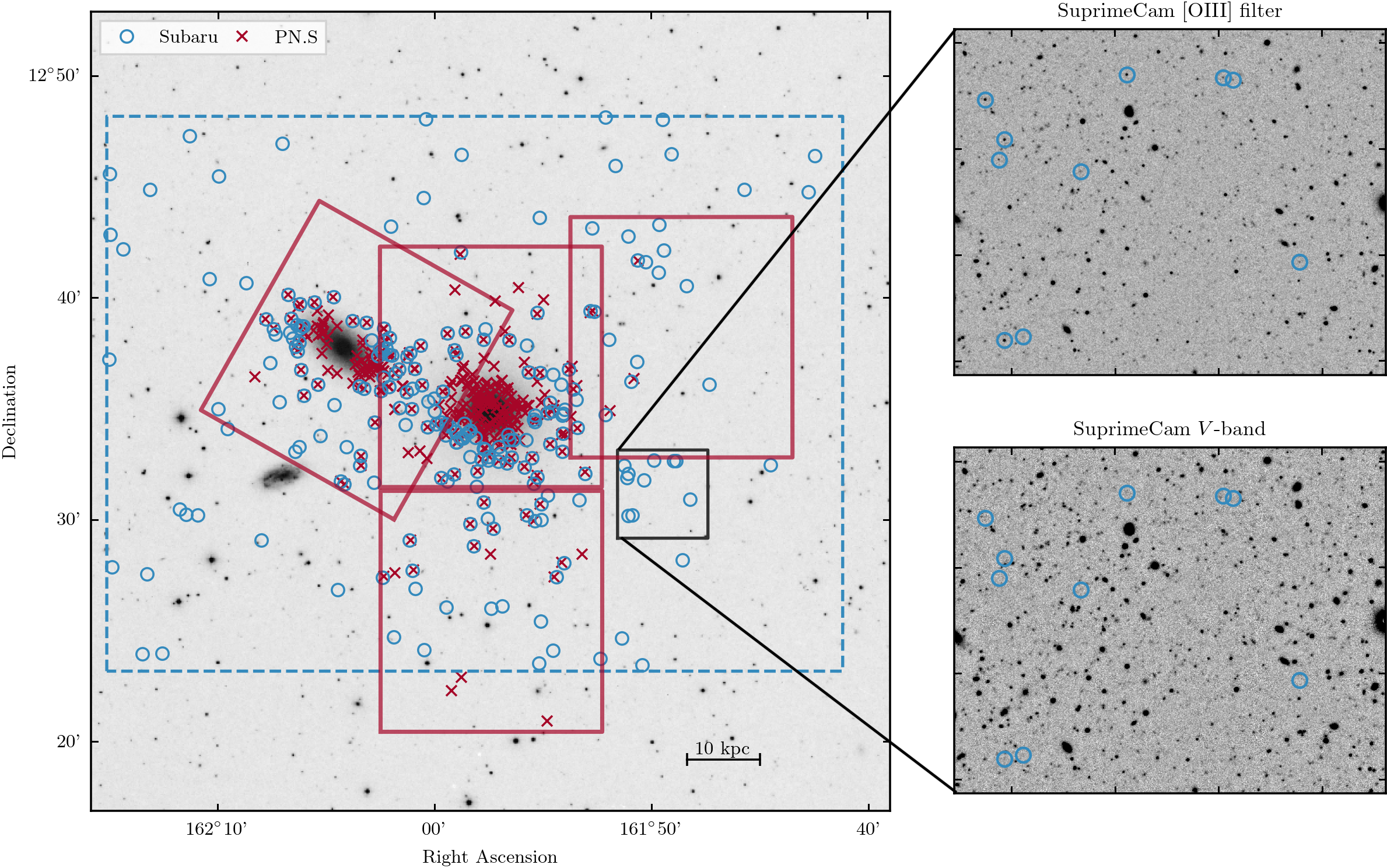 Figure 1: (left) On-sky distribution of planetary nebulae observed with the Subaru Telescope (blue circles) and the PN.S at the William Herschel Telescope (red crosses). The background image from the Digitized Sky Survey shows the galaxies NGC 3384 (left) and M105 (center); (right) Suprime-Cam [OIII] (top-right) and V-band (bottom-right) cutouts of a small region in the halo of M105, with the detected planetary nebulae highlighted with blue circles. (Credit: J. Hartke (ESO))

Once the census was completed, the team found an excess of PNe in the outer halo of M105, which significantly extends out to 50 kpc (160 kilo light-years), 18 times the effective radius (a "typical" size) of M105. In other words, there is an excess of old stars distributed in the outer halo. As in a detective story, the team then engaged in an investigation to look for the footprints of the parent stars of the detected PNe. By comparison with previous studies of red giant branch stars - the stellar ancestors of PNe - in the field, the team concluded that an old and very metal-poor population ([M/H] < -1.0) was "responsible" for generating the excess of PNe in the outer envelope encircling M105.

This was the breakthrough: This is the first study that has clearly established the link between the metal poor population and the excess of PNe in the outer regions of an elliptical galaxy. This outer component is faint – only 4% of the light in M105 reaches out to 18 effective radii, a region where it becomes possible to test the presence and the structure of dark matter. This will be investigated by measuring the velocities of the PNe and comparing the velocity dispersion profile with the dynamical models, e.g. for a single halo, or for a smaller halo within a larger halo of dark matter. Dr. Johanna Hartke, the lead author of the paper, comments on the future prospects, "This is especially interesting since M105 belongs to an elusive sample of galaxies, whose motions, as measured to date, are consistent with both very little dark matter as well as with massive dark matter halos. Our new, more extended data, will be able to firmly distinguish between these possibilities. "


This research was published in Astronomy and Astrophysics on October 7, 2020 (Johanna Hartke et al. "The halo of M105 and its group environment as traced by planetary nebula populations: I. Wide-field photometric survey of planetary nebulae in the Leo I group".)


See the link below for the details of this research.