A mystery in the evolution of solar-like low-mass stars is the existence of red giant stars that show anomalously large abundances of lithium (Li). A team of astronomers from NAOJ and NAOC (National Astronomical Observatories of China) has obtained clear evidence, based on measurements of surface chemical abundances and internal structure, that red giants with extremely high Li abundances are at the stage where they are burning helium at their centers. This result will be a clue to help solve long-standing problems in the stellar evolution theories.

Stars like the Sun can stably shine for a very long time, powered by hydrogen nuclear burning at their centers. However, when most of the hydrogen at the center has been converted to helium, the energy needed to support the structure of the star and keep it luminous starts to be supplied by hydrogen nuclear burning in the area around the central core (Figure 1). Such stars evolve into the stage known as red giant stars with increased luminosity. The convection at the surface of these stars becomes more active and mixes the material at the surface with the internal material. Lithium (Li), the third lightest elements following hydrogen and helium, is a fragile element that is destroyed at the high temperatures found inside of stars, and hence, becomes less abundant at the surface of red giants in which convection is very active. However, a small fraction of red giants are known to have orders of magnitude larger Li abundances compared to usual red giants (see Note 1). This is a mystery in the study of stellar structure and evolution. 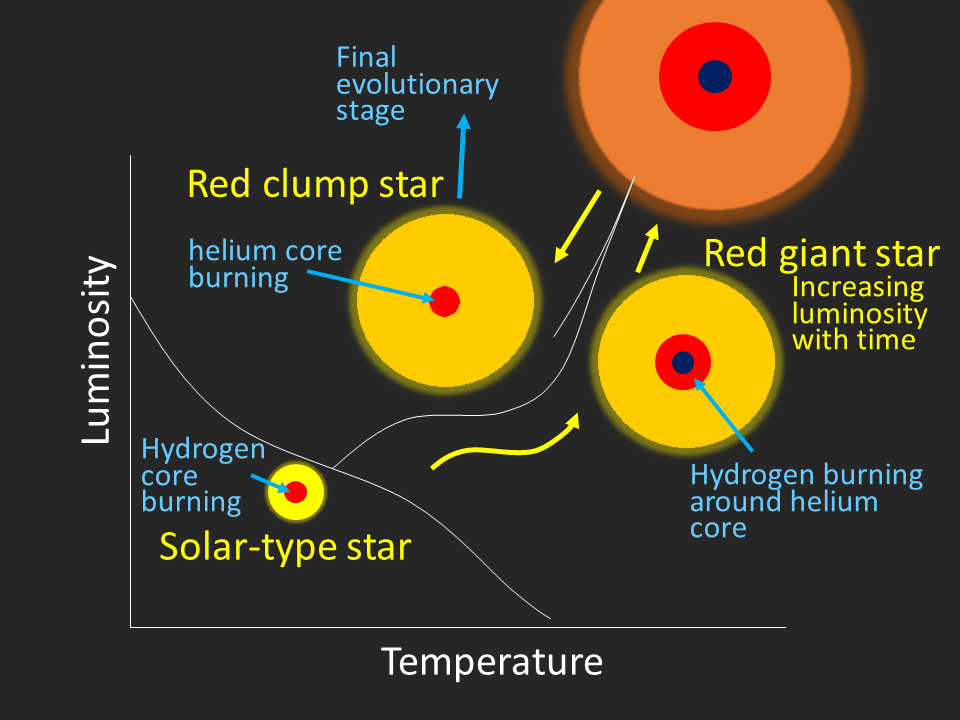 Figure 1: Internal structure and evolution of low-mass stars. Stars like the Sun shine because of the power released by the hydrogen nuclear fusion at the central region. This results in increased helium at the center, and the hydrogen nuclear burning around the central core gradually becomes the energy source of the star. The star expands corresponding with this change of the internal structure, moving to the so-called red giant stage. The luminosity of the star gradually increases with the growth of the central helium core. Helium nuclear burning finally ignites when the temperature at the center becomes sufficiently high, resulting in a kind of stable phase in the evolution having almost constant luminosity. The red giants in this evolutionary stage are called "clump stars." The internal structure of clump stars is different from red giants with hydrogen nuclear burning around the central core, but the temperature and luminosity of clump stars are indistinguishable from some red giants. This work used asteroseismology to distinguish these two different types of stars, revealing that stars having extreme excesses of Li are clump stars. (Credit: Wako Aoki (NAOJ))

Recent observations have suggested that red giants showing anomalously high Li excesses are so-called clump stars, which are a kind of red giant in which helium nuclear burning occurs at the central part. This could be a useful hint to solve the question about the origin of Li-enhanced stars. However, it is not easy to distinguish the evolutionary status of a red giant, and no definitive conclusion had been obtained.

This team has identified a number of red giants that exhibit excess Li from the spectra obtained with the spectroscopic survey telescope LAMOST in China (Figure 2), and distinguished the evolutionary stages of these objects through asteroseismology using the photometry data from the space telescope Kepler (see Note 2). This reveals that most of the Li-enhanced red giants are clump stars, and objects that show particularly high Li abundances are only found in this evolutionary stage. In this study, high-resolution spectra of 26 stars were obtained with the Subaru Telescope to derive reliable Li abundances, corroborating the above results (Figure 2, 3). 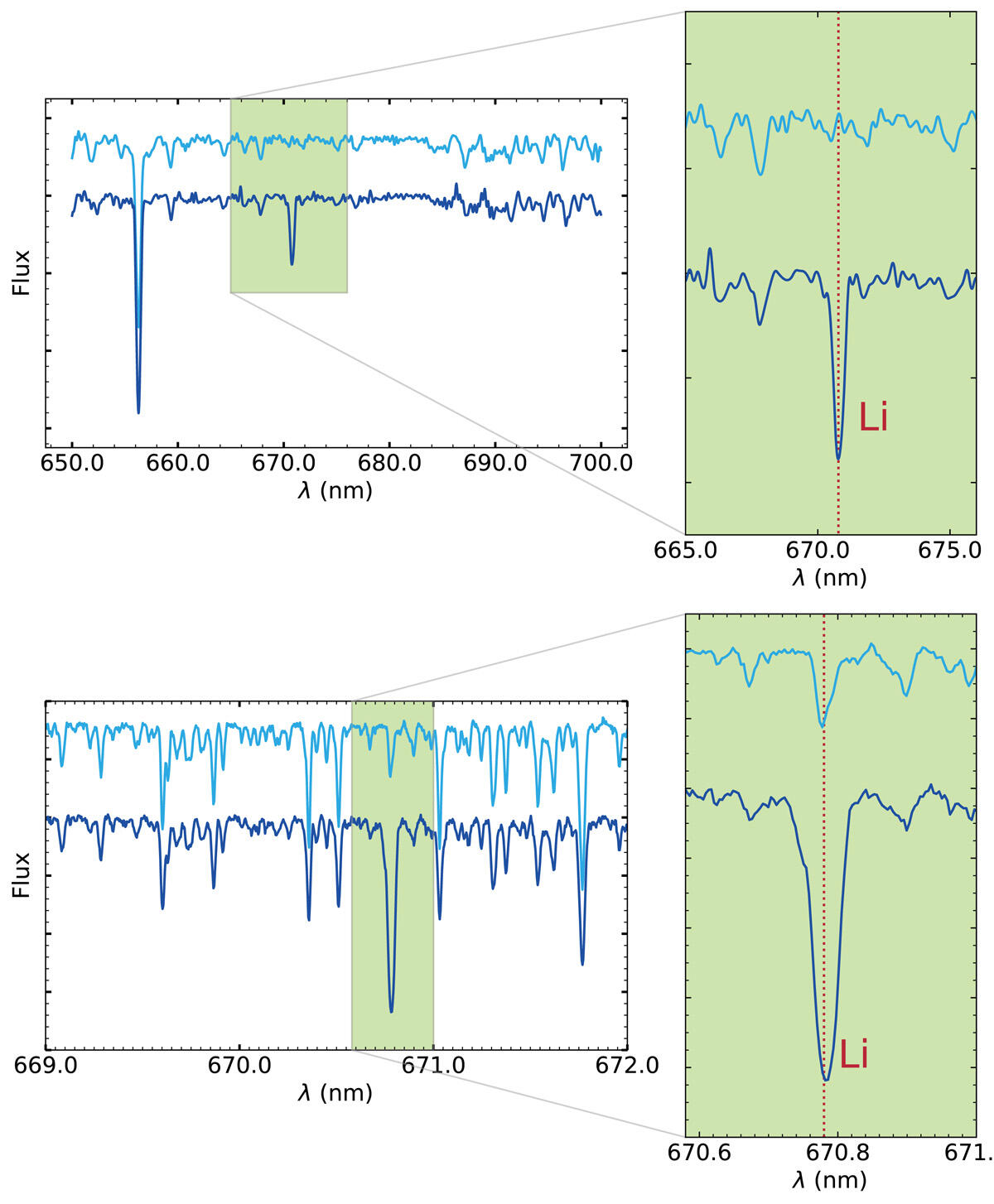 Figure 2: Examples of Li spectral lines observed with LAMOST (top) and the Subaru Telescope (bottom). The two lines in each panel indicate spectra of Li-normal and Li-enhanced stars. LAMOST could obtain such spectra for a large number of stars efficiently, whereas accurate abundances can be measured from Subaru Telescope spectra with higher spectral resolution, which are useful for further investigation of the results obtained from LAMOST spectra. (Credit: H. L. Yan (NAOC)) 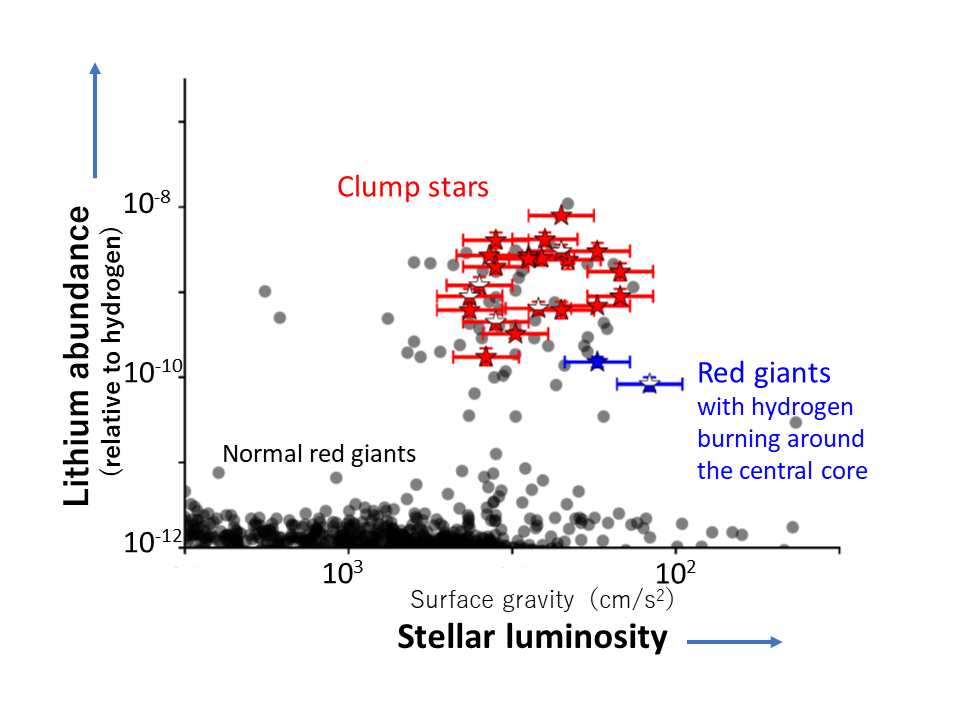 Figure 3: Li abundances of the Li-enhanced stars observed with the Subaru Telescope (stars). They have three orders of magnitude higher Li abundances than the bulk of previously studied red giants (grey circles). The Subaru Telescope observed targets for which high Li abundances were found in the preceding LAMOST observations, confirming the results with higher quality data. The red stars indicate clump stars (with helium nuclear burning at the center) that are dominant in Li-enhanced stars and have higher Li abundances in general than red giants with hydrogen nuclear burning around the central core shown by blue stars.
The horizontal axis shows the surface gravity of the stars, which anticorrelates with the luminosity (more luminous stars have lower gravity). (Credit: Yan et al.)

Low-mass stars like the Sun have been studied relatively well in the history of astronomy. The existence of Li-enhanced red giants, however, indicates that there remains an essential problem in our understanding of stellar structure and evolution. Although the mechanism that enhances Li is unknown, the result that the evolutionary status of such stars has been successfully identified is a big step toward solving the question. The high-resolution spectra obtained with the Subaru Telescope should contain rich information about the chemical abundances of many other elements in addition to Li and will be useful for further understanding of the nature of Li-enhanced stars.


Note 1: The frequency of distinctively Li-enhanced stars like those studied in this work is estimated to be about 1% of all red giants.

Note 2: The internal structures of stars can be probed by observing the oscillation of the stellar surface; similar to how the structure of the Earth can be investigated by monitoring earthquakes. This approach is called asteroseismology, enabling us to distinguish clump stars from other red giants having different internal structures. The oscillation of the stellar surface is measured as small, periodic variations in brightness. The precise and long-term measurements of brightness for a large number of stars with Kepler enable us to apply asteroseismology to many red giants.