New results achieved by combining big data captured by the Subaru Telescope and the power of machine learning have discovered a galaxy with an extremely low oxygen abundance of 1.6% solar abundance, breaking the previous record of the lowest oxygen abundance (Figure 1). The measured oxygen abundance suggests that most of the stars in this galaxy formed very recently. 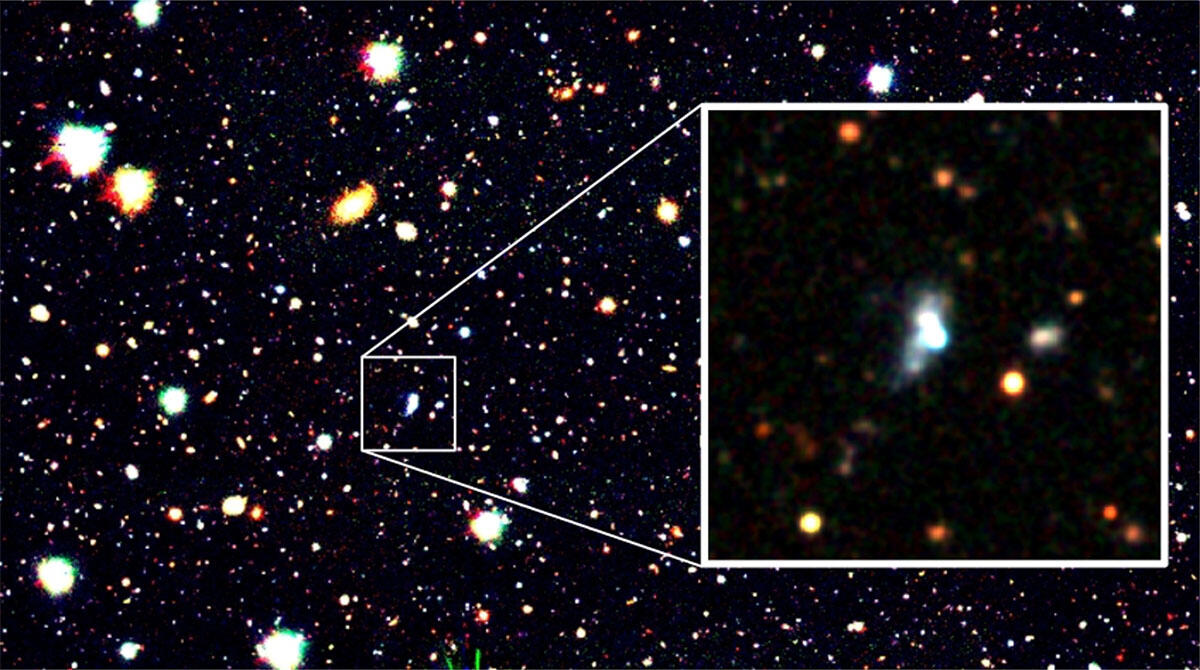 To understand galaxy evolution, astronomers need to study galaxies in various stages of formation and evolution. Most of the galaxies in the modern Universe are mature galaxies, but standard cosmology predicts that there may still be a few galaxies in the early formation stage in the modern Universe. Because these early-stage galaxies are rare, an international research team searched for them in wide-field imaging data taken with the Subaru Telescope. "To find the very faint, rare galaxies, deep, wide-field data taken with the Subaru Telescope was indispensable," emphasizes Dr. Takashi Kojima, the leader of the team.

The research team then performed follow-up observations to determine the elemental abundance ratios of 4 of the 27 candidates selected by the computer. They have found that one galaxy (HSC J1631+4426; Figure 1), located 430 million light-years away in the constellation Hercules, has an oxygen abundance only 1.6 percent of that of the Sun. This is the lowest values ever reported for a galaxy. The measured oxygen abundance suggests that most of the stars in this galaxy formed very recently. In other words, this galaxy is undergoing an early stage of the galaxy evolution.

"What is surprising is that the stellar mass of the HSC J1631+4426 galaxy is very small, 0.8 million solar masses. This stellar mass is only about 1/100,000 of our Milky Way galaxy, and comparable to the mass of a star cluster in our Milky Way," said Prof. Ouchi of the National Astronomical Observatory of Japan and the University of Tokyo. This small mass also supports the primordial nature of the HSC J1631+4426 galaxy.

The research team thinks that there are two interesting indications from this discovery. First, this is the evidence about a galaxy at such an early stage of galaxy evolution existing today. In the framework of the standard cosmology, new galaxies are thought to be born in the present universe. The discovery of the HSC J1631+4426 galaxy backs up the picture of the standard cosmology. Second, we may witness a new-born galaxy at the latest epoch of the cosmic history. The standard cosmology suggests that the matter density of the universe rapidly drops in our universe whose expansion accelerates. In the future universe with the rapid expansion, matter does not assemble by gravity, and new galaxies won’t be born. The HSC J1631+4426 galaxy may be the last generation galaxy in the long cosmic history.


This research will be published in the Astrophysical Journal on August 3, 2020 (Kojima et al. 2020, "Extremely Metal-Poor Representatives Explored by the Subaru Survey (EMPRESS). I. A Successful Machine Learning Selection of Metal-Poor Galaxies and the Discovery of a Galaxy with M*<106 Msun and 0.016 Zsun"). A preprint is available here. This research was supported by the Ministry of Education, Culture, Sports, Science and Technology's World Premier International Research Center Program and Grants-in-Aid for Scientific Research (JP15H02064, JP17H01110, JP17H01114, JP17K14257, JP18J12840, JP18J12727, and JP18K13578).