A team of scientists using the Subaru Telescope has reported the first definitive detection of a relativistic jet emerging from two colliding galaxies - in essence, the first photographic proof that merging galaxies can produce jets of charged particles that travel at nearly the speed of light (Figure 1).

Furthermore, scientists had previously discovered that these jets could be found in elliptical-shaped galaxies, which can be formed in the merging of two spiral galaxies. Now, they have an image showing the formation of a jet from two younger, spiral-shaped galaxies. 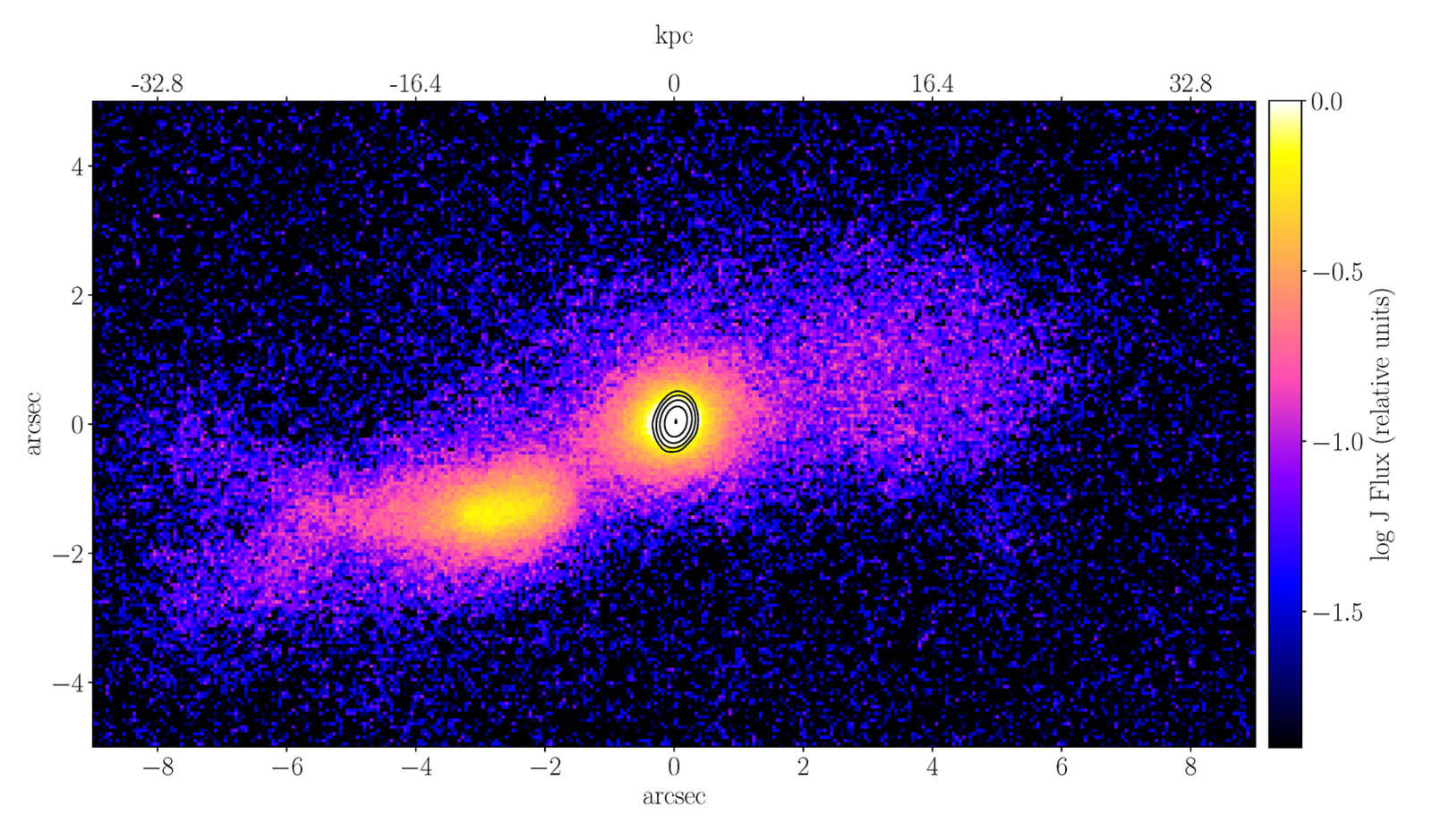 Figure 1: The Seyfert 1 galaxy, TXS 2116-077, (seen on the right) collides with another spiral-shaped galaxy of similar mass, creating a relativistic jet in the TXS's center. Both galaxies have active galactic nuclei (AGN). This image was obtained with the InfraRed Camera and Spectrograph (IRCS, in combination with its AO system AO 188, mounted at the Subaru Telescope on 2018 June 16. (Credit: Vaidehi Paliya)

"For the first time, we have found two spiral- or disk-shaped galaxies on path for a collision that have produced a nascent, baby jet that has just started its life at the center of one of the galaxies," said Dr. Vaidehi Paliya of the Deutsches Elektronen Synchrotron in Germany (and a former post-doctoral researcher at Clemson University), the lead author of the paper reporting this discovery.

The fact that the jet is so young enabled the researchers to clearly see its host. Scientists have already imaged galactic collisions many times. The research team is the first to capture two galaxies merging where there is a fully formed jet pointing at us - albeit, a very young one, and thus not yet bright enough to blind us.

Jets are the most powerful astrophysical phenomena in the universe. They can emit more energy into the universe in one second than our sun will produce in its entire lifetime. That energy is in the form of radiation, such as intense radio waves, X-rays, and gamma-rays.

Scientists theorize that the AGNs grow larger by gravitationally drawing in gas and dust through a process called accretion. But not all of this matter gets accreted into the black hole. Some of the particles become accelerated and are spewed outward in narrow beams in the form of jets.

The team's image captured the two galaxies, a Seyfert 1 galaxy known as TXS 2116-077 and another galaxy of similar mass, as they were colliding for the second time because of the amount of gas seen in the image.

Dr. Hyewon Suh of Subaru Telescope emphasizes the importance of the Subaru's observations, saying "With the deep and superb resolved imaging of the Subaru Telescope, we, for the first time, were able to capture this jet-emitting galaxy in the process of merging with a nearby companion at their close separation of just 40,000 light-years, indicating that they are in a final stage of merger and approaching coalescence."

"Scientists have carried out detailed numerical simulations and predicted that this event may ultimately lead to the formation of one giant elliptical galaxy," said Paliya. "Depending on the physical conditions, it may host a relativistic jet, but that's in the distant future."

The team captured the image using IRCS (in combination with AO 188) mounted at the Subaru Telescope. They performed subsequent observations with the Gran Telescopio Canarias and William Herschel Telescope on the island of La Palma off the coast of Spain, as well as with NASA's Chandra X-Ray Observatory space telescope.