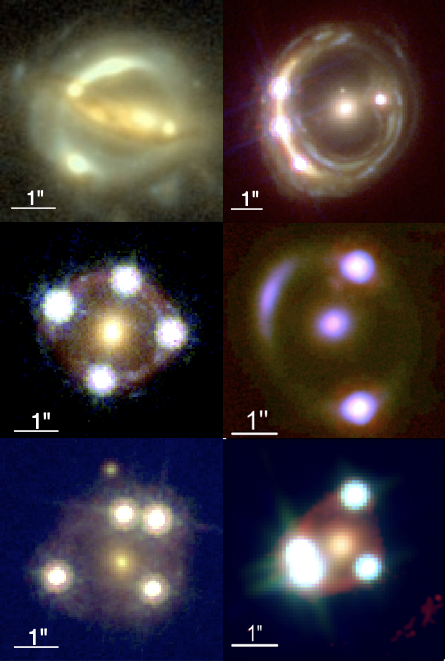 Knowing the precise value for how fast the universe expands is important for determining the age, size, and fate of the cosmos. Unraveling this mystery has been one of the greatest challenges in astrophysics in recent years. The new study adds evidence to the idea that new theories may be needed to explain what scientists are finding.

The researchers' result further strengthens a troubling discrepancy between the expansion rate, called the Hubble constant, calculated from measurements of the local universe and the rate as predicted from background radiation in the early universe, a time before galaxies and stars even existed.

This latest value represents the most precise measurement yet using the gravitational lensing method, where the gravity of a foreground galaxy acts like a giant magnifying lens, amplifying and distorting light from background objects. This latest study did not rely on the traditional "cosmic distance ladder" technique to measure accurate distances to galaxies, by using various types of stars as "milepost markers." Instead, the researchers employed the physics of gravitational lensing to calculate the universe's expansion rate.

The astronomy team that made the new Hubble constant measurements is dubbed H0LiCOW (H0 Lenses in COSMOGRAIL's Wellspring). COSMOGRAIL is the acronym for Cosmological Monitoring of Gravitational Lenses, a large international project whose goal is monitoring gravitational lenses. "Wellspring" refers to the abundant supply of quasar lensing systems.

The H0LiCOW value for the Hubble constant is close to the expansion rate measurements achieved through previous observing techniques, which have been greatly refined over the past three decades.

H0LiCOW and other recent measurements suggest a faster expansion rate in the local universe than was expected based on observations by the European Space Agency's Planck satellite of how the cosmos behaved more than 13 billion years ago.

The gulf between the two values has important implications for understanding the universe's underlying physical parameters and may require new physics to account for the mismatch.

"If these results do not agree, it may be a hint that we do not yet fully understand how matter and energy evolved over time, particularly at early times," said H0LiCOW team leader Sherry Suyu of the Max Planck Institute for Astrophysics in Germany, the Technical University of Munich, and the Academia Sinica Institute of Astronomy and Astrophysics in Taipei, Taiwan.

How they did it

The H0LiCOW team used Hubble to observe the light from six faraway quasars, the brilliant searchlights from gas orbiting supermassive black holes at the centers of galaxies. They are ideal background objects because they are bright, extremely distant, and scattered all over the sky. The telescope observed how the light from each quasar was multiplied into four images by the gravity of a massive foreground galaxy.

The light rays from each lensed quasar image take a slightly different path through space to reach Earth. The pathway's length depends on the amount of matter that is distorting space along the line of sight to the quasar. To trace each pathway, the astronomers monitor the flickering of the quasar's light as its black hole gobbles up material. When the light flickers, each lensed image brightens at a different time.

This flickering sequence allows researchers to measure the time delays between each image as the lensed light travels along its path to Earth. To fully understand these delays, the team first used Hubble to make accurate maps of the distribution of matter in each lensing galaxy. Astronomers could then reliably deduce the distances from the galaxy to the quasar, and from Earth to the galaxy and to the background quasar. By comparing these distance values, the researchers measured the universe's expansion rate.

"The length of each time delay indicates how fast the universe is expanding," said team member Kenneth Wong of the University of Tokyo's Kavli Institute for the Physics and Mathematics of the Universe, lead author of the H0LiCOW collaboration's most recent paper. "If the time delays are shorter, then the universe is expanding at a faster rate. If they are longer, then the expansion rate is slower."

The time-delay process is analogous to four trains leaving the same station at exactly the same time and traveling at the same speed to reach the same destination. However, each of the trains arrives at the destination at a different time. That's because each train takes a different route, and the distance for each route is not the same. Some trains travel over hills. Others go through valleys, and still others chug around mountains. From the varied arrival times, one can infer that each train traveled a different distance to reach the same stop. Similarly, the quasar flickering pattern does not appear at the same time because some of the light is delayed by traveling around bends created by the gravity of dense matter in the intervening galaxy.

The team's measurement also is close to the Hubble constant value of 74 calculated by the Supernova H0 for the Equation of State (SH0ES) team, which used the cosmic distance ladder technique. The SH0ES measurement is based on gauging the distances to galaxies near and far from Earth by using Cepheid variable stars and supernovas as measuring sticks to the galaxies.

The SH0ES and H0LiCOW values significantly differ from the Planck number of 67, strengthening the tension between Hubble constant measurements of the modern universe and the predicted value based on observations of the early universe.

"One of the challenges we overcame was having dedicated monitoring programs through COSMOGRAIL to get time delays for several of these quasar lensing systems," Suyu said. "At the same time, new mass modeling techniques were developed to measure a galaxy's matter distribution, including models we designed to make use of the high-resolution Hubble imaging. The images enabled us to reconstruct, for example, the quasars' host galaxies. These images, along with additional wider-field images taken from ground-based telescopes, also allow us to characterize the environment of the lens system, which affects the bending of light rays. The new mass modeling techniques, in combination with the time delays, help us to measure precise distances to the galaxies."

Eduard Rusu from the National Astronomical Observatory of Japan and former Subaru Fellow, lead author of one of the team's recent papers, elaborated on the role of ground-based telescopes to this study, and in particular of the Subaru Telescope: "These massive galaxies responsible for the gravitational lensing effect do not leave in isolation. In fact, by ignoring the various other galaxies surrounding them we would be biasing the measured value of the Hubble constant. We account for these many galaxies which constitute the "lens environment" by obtaining spectroscopic as well as wide-field color images of them with ground-based telescope. In particular, we have used images obtained with Subaru Telescope's Suprime-Cam and MOIRCS. As we expand our sample of systems, some of these will fall in the footprint of the Hyper Suprime-Cam Strategic Program, and will also serve as ideal targets for the upcoming Prime Focus Spectrograph."

Begun in 2012, the H0LiCOW team now has Hubble images and time-delay information for 10 lensed quasars and intervening lensing galaxies. In collaboration with researchers in two programs called STRIDES (STRong-lensing Insights into Dark Energy Survey), that has been searching for new lensed quasar systems, and SHARP (Strong-lensing at High Angular Resolution Program), that images lenses using adaptive optics with the Keck telescopes, the goal is to observe 30 more systems to reduce their 2.4% percent uncertainty to 1%.

NASA's upcoming James Webb Space Telescope, expected to launch in 2021, may help them achieve their goal of 1% uncertainty much faster through Webb's ability to map the velocities of stars in a lensed galaxy, which will allow astronomers to develop more precise models of the galaxy's distribution of matter.

The H0LiCOW team's work paves the way for studying hundreds of lensed quasars that are being discovered in current surveys like PanSTARRS (Panoramic Survey Telescope and Rapid Response System), Hyper Suprime-Cam Strategic Program and Dark Energy Survey, and the thousands that are expected to be discovered by the upcoming National Science Foundation's Large Synoptic Survey Telescope.