The 'Cores' of Massive Galaxies Had Already Formed 1.5 Billion Years after the Big Bang

A distant galaxy more massive than our Milky Way -- with more than a trillion stars -- has revealed that the 'cores' of massive galaxies in the Universe had formed already 1.5 billion years after the Big Bang, about 1 billion years earlier than previous measurements revealed.

Researchers published their analysis on November 6, 2019 in The Astrophysical Journal Letters, a journal of the American Astronomical Society. 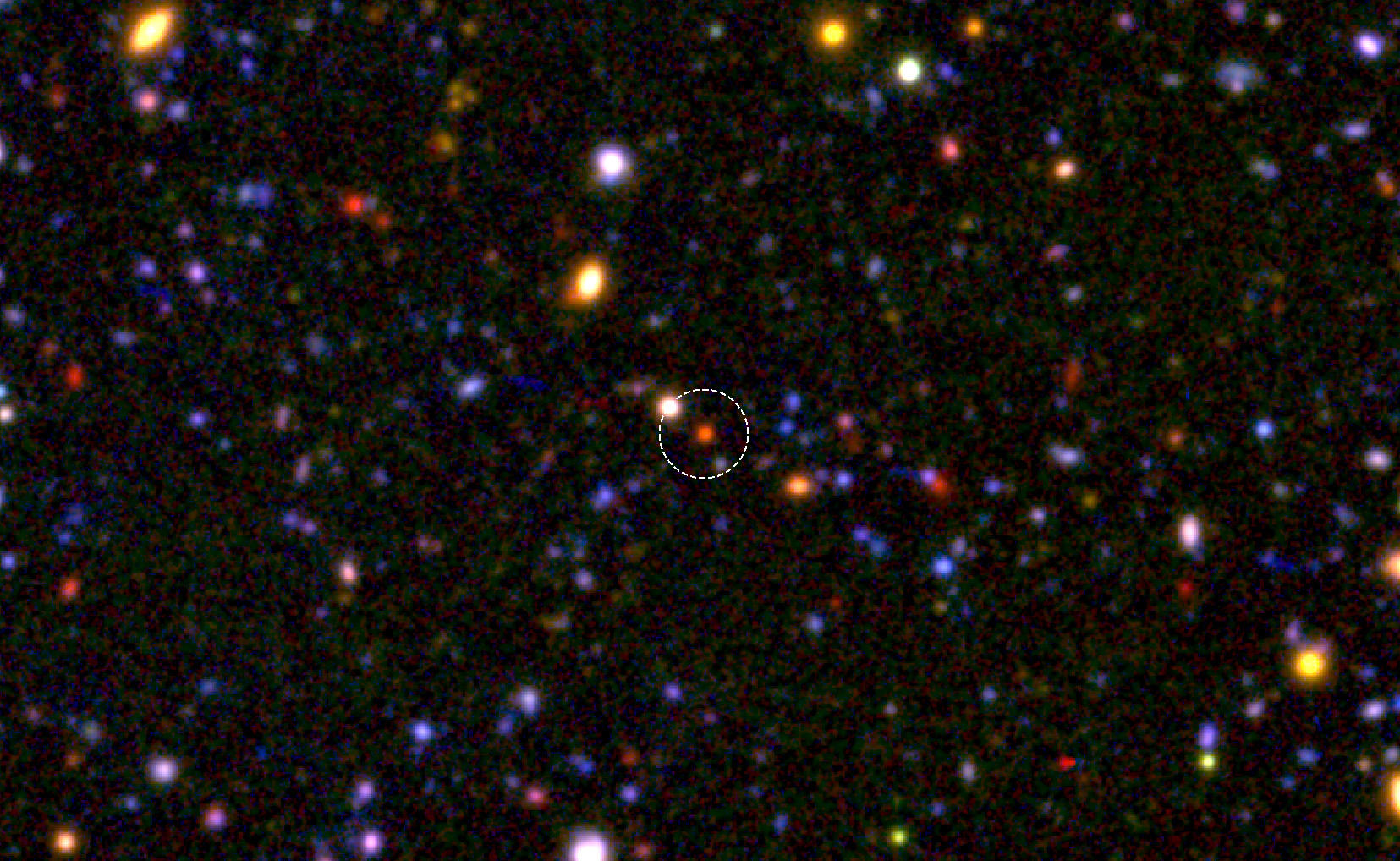 Figure 1: A blow-up of a small portion of the Subaru/XMM-Newton Deep Field. The red galaxy at the center is a dying galaxy at 12 billion years ago. Astronomers measured the motion of stars in the galaxy and found that the core of the galaxy is nearly fully formed. (Credit: NAOJ)

"If we point a telescope to the sky and take a deep image, we can see so many galaxies out there," said Masayuki Tanaka, paper author and associate professor of astronomical science in the Graduate University for Advanced Studies and the National Astronomical Observatory of Japan. "But our understanding of how these galaxies form and grow is still quite limited -- especially when it comes to massive galaxies."

The researchers used the telescopes at the W.M. Keck Observatory in Hawaii to observe a quenching galaxy in what is called the Subaru/XMM-Newton Deep Field. This region of the sky has been closely observed by several telescopes, producing a wealth of data for scientists to study. Tanaka and his team used an instrument called MOSFIRE on the Keck I telescope to obtain measurements of the galaxy. They obtained a two-micron measurement in the near-infrared spectrum, which the human eye cannot see, but it confirmed that the light from the galaxy was emitted just 1.5 billion years after the Big Bang. The team also confirmed that the galaxy's star formation was suppressed.

"The suppressed star formation tells you that a galaxy is dying, sadly, but that is exactly the kind of galaxy we want to study in detail to understand why quenching occurs," said Francesco Valentino, a co-author of the paper and an assistant professor at the Cosmic Dawn Center in Copenhagen.

According to Valentino, astronomers believe that massive galaxies are the first to die in the history of the Universe and that they hold the key to understanding why quenching occurs in the first place.

"We also found that the 'cores' of massive galaxies today seem to be fully formed in the early Universe," Tanaka said. How stars move within a galaxy depends on how much mass that object contains. Tanaka and his team found that the stars in the distant galaxy seem to move just as quickly as those closer to home. "The previous measurement of this kind was made when the Universe was 2.5 billion years old. We pushed the record up to 1.5 billion years and found, to our surprise, that the core was already pretty mature." 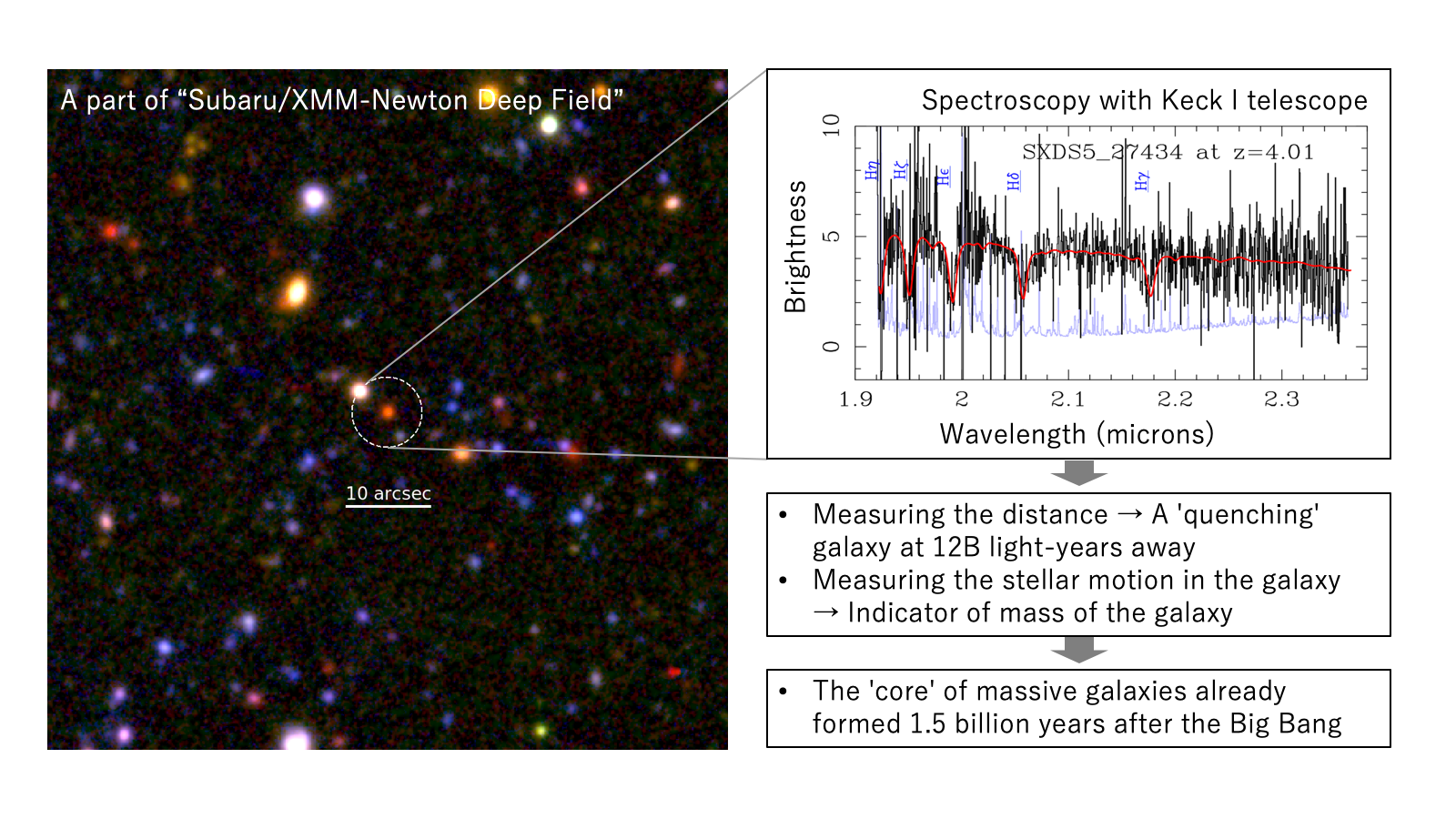 Figure 2: A schematic view of this work. The dying galaxy in the Subaru/XMM-Newton Deep Field was observed with MOSFIRE on the Keck I telescope. The top-right panel shows the spectrum at 2 microns, which is invisible to the human eye. The spectrum gives the distance to the galaxy (12 billion years ago) as well as a mass of the galaxy, which turned out to be as massive as the core of galaxies today. (Credit: NAOJ/Tanaka et al. 2019).

The researchers are continuing to investigate how massive galaxies form and how they die in the early Universe, and they are searching for more massive quenching galaxies in the far distant Universe that may shed light on earlier phases of the process.

"When did the first dead galaxy appear in the Universe?" Tanaka asked. "This is a very interesting question for us to address. To do so, we will continue to observe the deep sky with the largest telescopes and expand our search as more advanced facilities become available."

This work was funded, in part, by the Japan Society for the Promotion of Science Grants-in-Aid for Scientific Research (No. JP15K17617); the Danish National Research Foundation; the Carlsberg Foundation; the European Research Council; the Japanese Cabinet Office; the Ministry of Education, Culture, Sports, Science and Technology; the Toray Science Foundation; the National Astronomical Observatory of Japan; the Kavli Institute for the Physics and Mathematics of the Universe; the High Energy Accelerator Research Organization; Academia Sinica Institute of Astronomy and Astrophysics; and Princeton University.

Other contributors include Sune Toft, Carlos Gómez-Guijarro, Georgios E. Magdis, Charles L. Steinhardt, and Mikkel Stockmann, all of the Cosmic Dawn Center and the Niels Bohr Institute of the University of Copenhagen. Magdis is also affiliated with DTU Space, the National Space Institute of the Technical University of Denmark. Masato Onodera and Rhythm Shimakawa, both of the Subaru Telescope at the National Astronomical Observatory of Japan; Daniel Ceverino of the Universidad Autonoma de Madrid; Andreas Faisst of IPAC at the California Institute of Technology; Anna Gallazzi of INAF - Observatorio Astrofisico di Arcetri; Mariko Kubo of the National Astronomical Observatory of Japan; Kiyoto Yabe of the Kavli Institute for the Physics and Mathematics of the Universe; and Johannes Zabl, of Unive Lyon at the Centre de Recherche Astrophysique de Lyon, also contributed. Onodera also has an affiliation with the Department of Astronomical Science at the Graduate University for Advanced Studies.