The Whole Picture of Distant Supercluster in Three Dimensions

Using the Subaru Telescope and Gemini-North Telescope, a team of astronomers has revealed that the supercluster CL1604, a distant supercluster located about 7.3 billion light-years away, is a large-scale 3-D structure extending over about 160 million light-years in the north-south direction. This is more than two times more extended than what was already known. Until now, we saw merely the “tip of the iceberg” of the supercluster. The wide-field capability of the Subaru Telescope enabled us to survey the whole of the supercluster and the Gemini-North Telescope played a critical role in confirming the structures. This is the outcome of the good synergy of the telescopes of the Maunakea observatories. 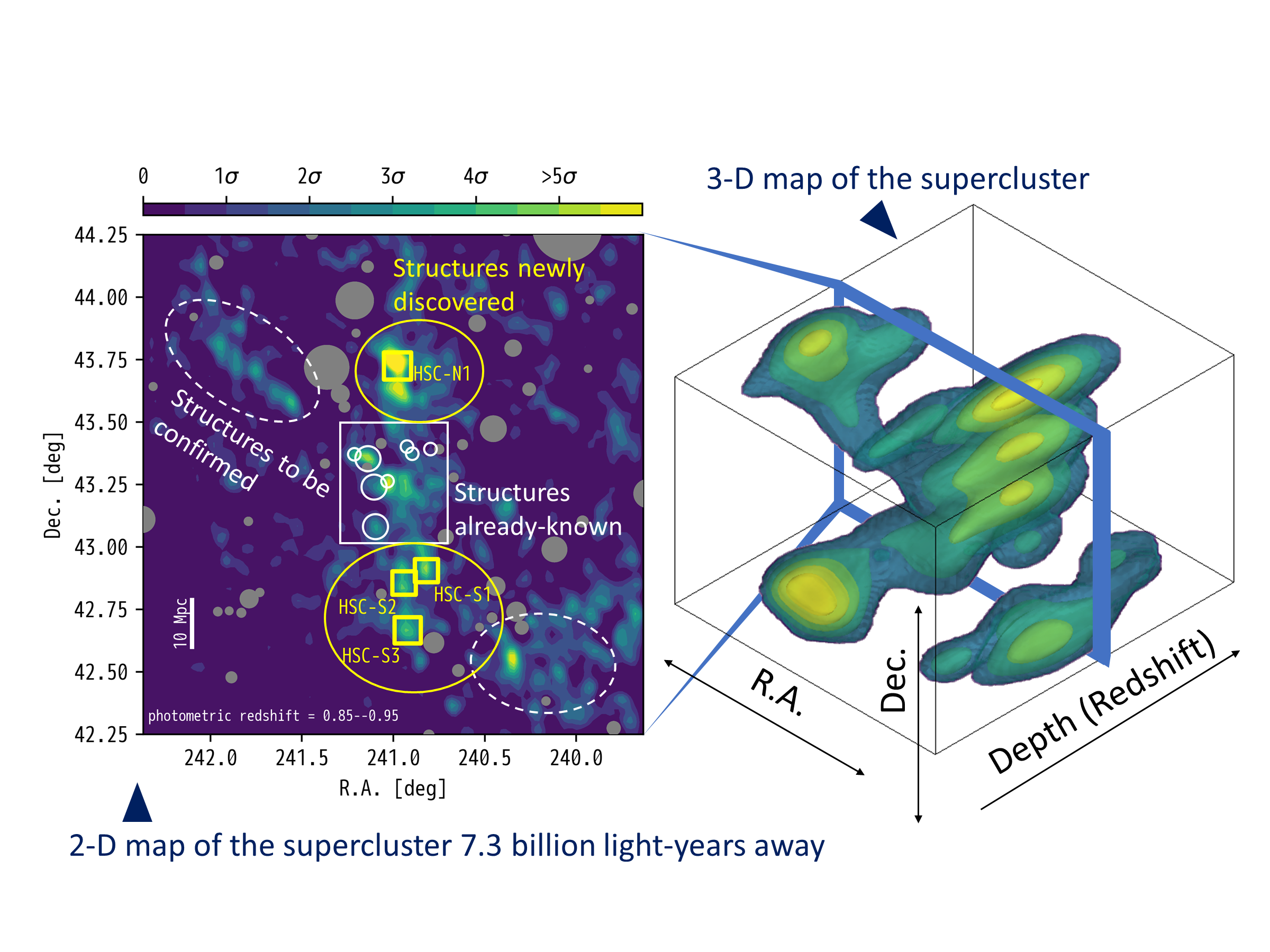 Figure 1: The 3-D and 2-D maps of the number density of galaxies associated with the supercluster. In the 2-D map, the large-scale structures of galaxies located in the slice at about 7.3 billion years ago are shown. The white areas show the structures already known from previous studies, and the yellow areas show the structures newly discovered by this study. The structures marked by the dotted ellipses are to be confirmed by future works. The white vertical line in the figure corresponds to a distance of about 30 million light-years (i.e., 10 Mpc). (Credit: NAOJ)

Galaxies are distributed inhomogeneously in the Universe. It is well-known that nearby galaxies are strongly influenced by their environment, e.g., whether they are located in dense areas called galaxy clusters or less dense areas called voids. However, how galaxies form and evolve along with the growth of the cosmic web structures is one of the hot topics of astronomy. A wide-field survey of the distant Universe allows us to witness what actually happened with galaxies in the early phase of structure formation in the Universe. Among the few superclusters currently known, one of the best targets for study is the supercluster CL1604. Based on previous studies, its extent is 80 million light-years and its era is 7.3 billion years ago.

The uniqueness of the data taken by Hyper Suprime-Cam (HSC) on the Subaru Telescope is the deep imaging data over a field wide enough to fully cover the known supercluster and the surrounding area. A team led by Masao Hayashi and Yusei Koyama from NAOJ estimated the distances of individual galaxies from the galaxy colors using a technique called “photometric redshift.” Then, the three dimensional picture of the large-scale structures appears, which consists of several galaxy clusters newly discovered in the north-south direction as well as the structures already known (Figure 1).

Furthermore, the team used the Faint Object Camera and Spectrograph (FOCAS) on the Subaru Telescope and the Gemini Multi-Object Spectrograph (GMOS) on Gemini-North to confirm the precise distances of 137 galaxies associated with the galaxy clusters revealed by HSC (Figure 2). It is found that the supercluster is a complex large-scale structure not only over the vast projected area but also along the line-of-sight direction in 3D. The galaxies spread over the 160 million light-years seem to be independent due to the vast area, however, the spectroscopic observations tell us that the galaxies formed simultaneously and then evolve along with the growth of large-scale structures.

Our Galaxy is a member of Local Group on the outskirts of Virgo Galaxy Cluster. A team led by an astronomer from the University of Hawaii recently revealed that the Virgo Cluster is a member of a more extended enormous large-scale structure named the Laniakea Supercluster. "The supercluster we discovered 7.3 billion years ago may grow to be a huge large-scale structure similar to Laniakea where we live" said Hayashi. 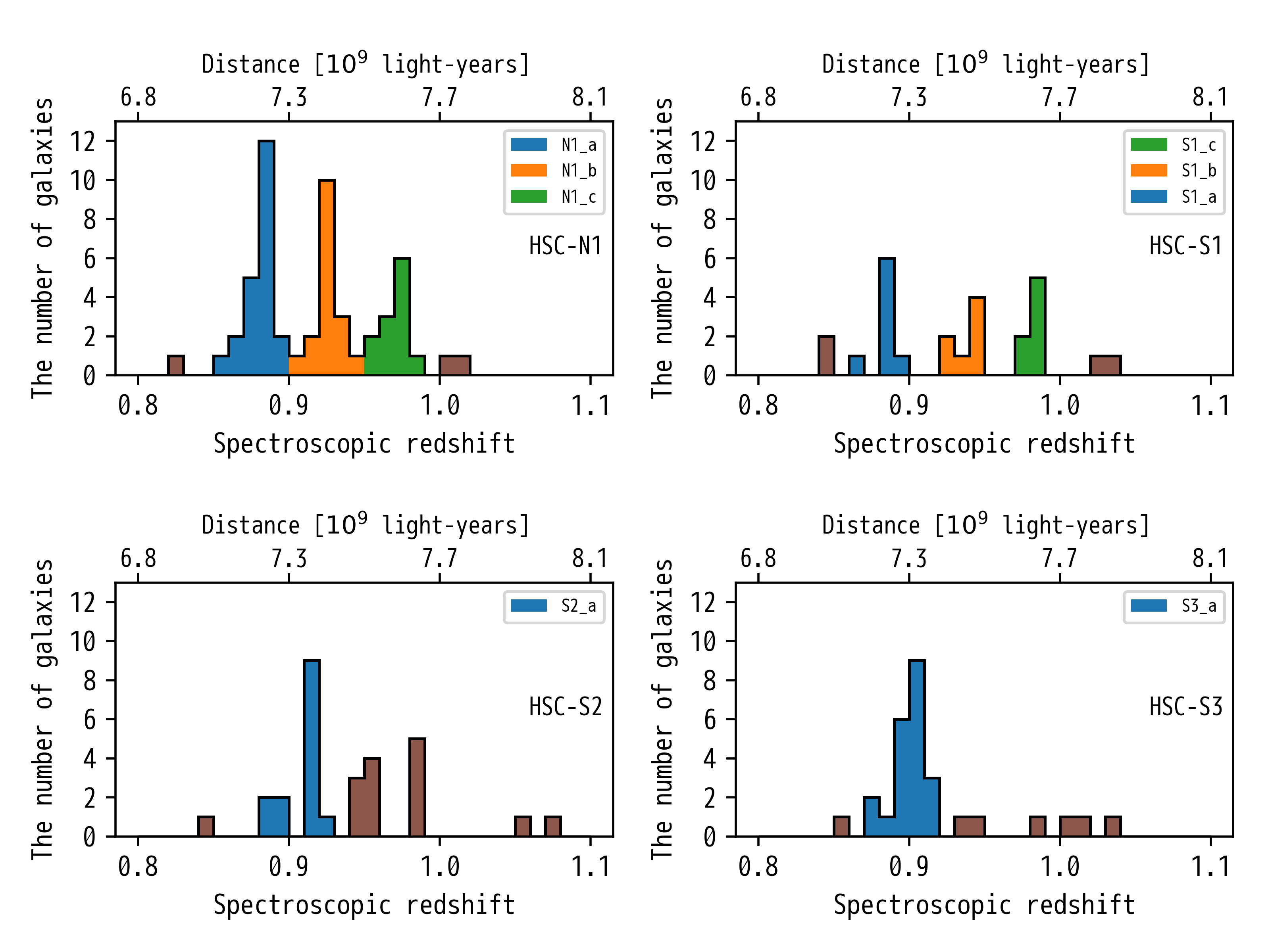 Figure 2: The distribution of redshift (i.e., distance in the depth direction) of the galaxies confirmed by our spectroscopic observations. In each area, the histogram is color-coded by the distance of the galaxies. The same color for the histograms means that the galaxy clusters are located at the same distance in the depth direction irrespective of the location on the sky. (Credit: NAOJ)

These results were published in Publications of the Astronomical Society of Japan (Hayashi et al., "The whole picture of the large-scale structure of the CL1604 supercluster at z∼0.9"). A preprint is available here.