A team of researchers identified the outermost edge of the Milky Way Galaxy - the Galaxy that humans reside in. Using the Subaru Telescope, the researchers examined the boundary of the stellar system that makes up our Galaxy. The ultimate size of our Galaxy is 520,000 light years in radius, 20 times larger than the distance between the Galactic Center and our solar system (26,000 light years) (Figure 1). Stars that reach these outermost regions of the Galaxy during their orbital motions are ancient stellar populations with ages as old as 12 billion years. The spatial extent in which these ancient stars wonder is, therefore, important for our understanding of the Milky Way's formation. 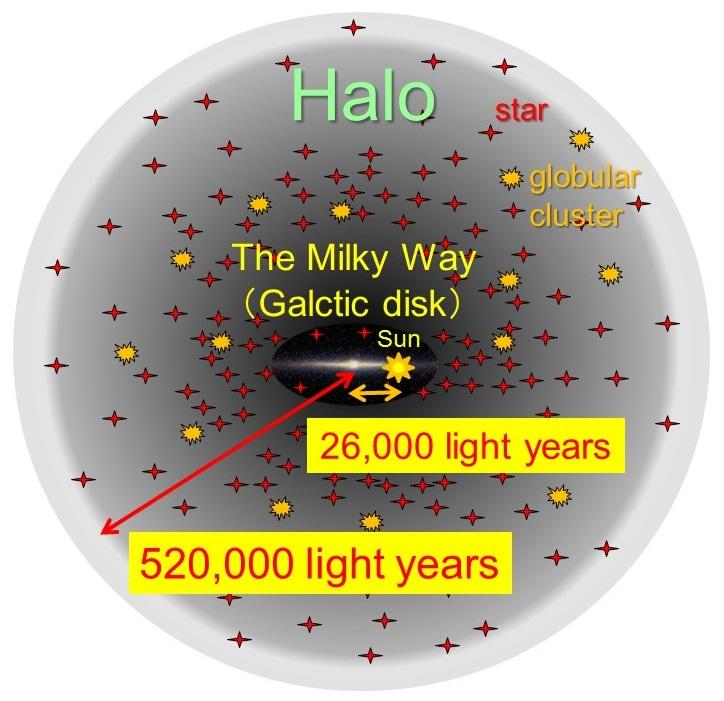 Our Galaxy holds a broadly extended halo component, in addition to the bright Milky Way in the form of the stellar disk component. The halo contains about a billion ancient stars and 150 globular clusters with ages as old as 12 billion years (Figure 1). The halo thus contains the remnants of long-lived stars and star clusters that formed in the first stage of the Galaxy. This suggests that the Galaxy was quite large in its beginning before the later formation of the younger, disk component.

Investigating the extent of this halo component in the Galaxy is similar to identifying the outer boundary of a forest whilst similarly being inside the forest and observing the trees. In other words, it is an arduous task. So called blue horizontal branch (BHB) stars as well as RR Lyr variables are ideal indicators for tracing the halo component. This is because they are naturally bright enough to determine the distance to and from them. However, the Galaxy is so large that it is impossible to identify the halo traces located at the outer boundary using 2.5 to 4 meter-diameter telescopes.

The team of researchers led by Tohoku University graduate student, Tetsuya Fukushima and his supervisor Masashi Chiba used the Hyper Suprime-Cam (HSC) digital camera on the 8.2 meter diameter Subaru Telescope. It enabled them to capture remote, very faint halo tracers at the outer edge of the Galaxy. The team carefully selected the BHB stars from the on-going survey program (SSP: Subaru Strategic Program) data against other contaminants having similar colors such as so-called blue straggler stars, white dwarfs, quasars and distant galaxies.

Using the data from HSC-SSP, the team derived the spatial density of the BHB stars over the Galaxy halo. While this density generally decreases the further you go from the Galactic center, the team discovered a sharp drop in density at around 520,000 light years away from the Galactic center. Thus, the team had finally reached the outermost edge of the Galaxy that we reside in. This is about 20 times larger than the distance between our Solar system and the Galaxy center.

Twelve billion years ago, successive merging of small galaxies confined by dark matter halos occurred. Key to understanding this is measuring the distribution of the halo component to ascertain the volume. This merging process differs from galaxy to galaxy. Our neighbor, the Andromeda Galaxy, is reported to have an extended halo component as large as 538,000 (at the very least) light years in its radius. It is, therefore, systematically larger when compared to the Galaxy halo. The researchers are planning to further map out this ancient component of the Galaxy after the final completion of the HSC-SSP.