Star with Strange Chemistry is from Out of Town 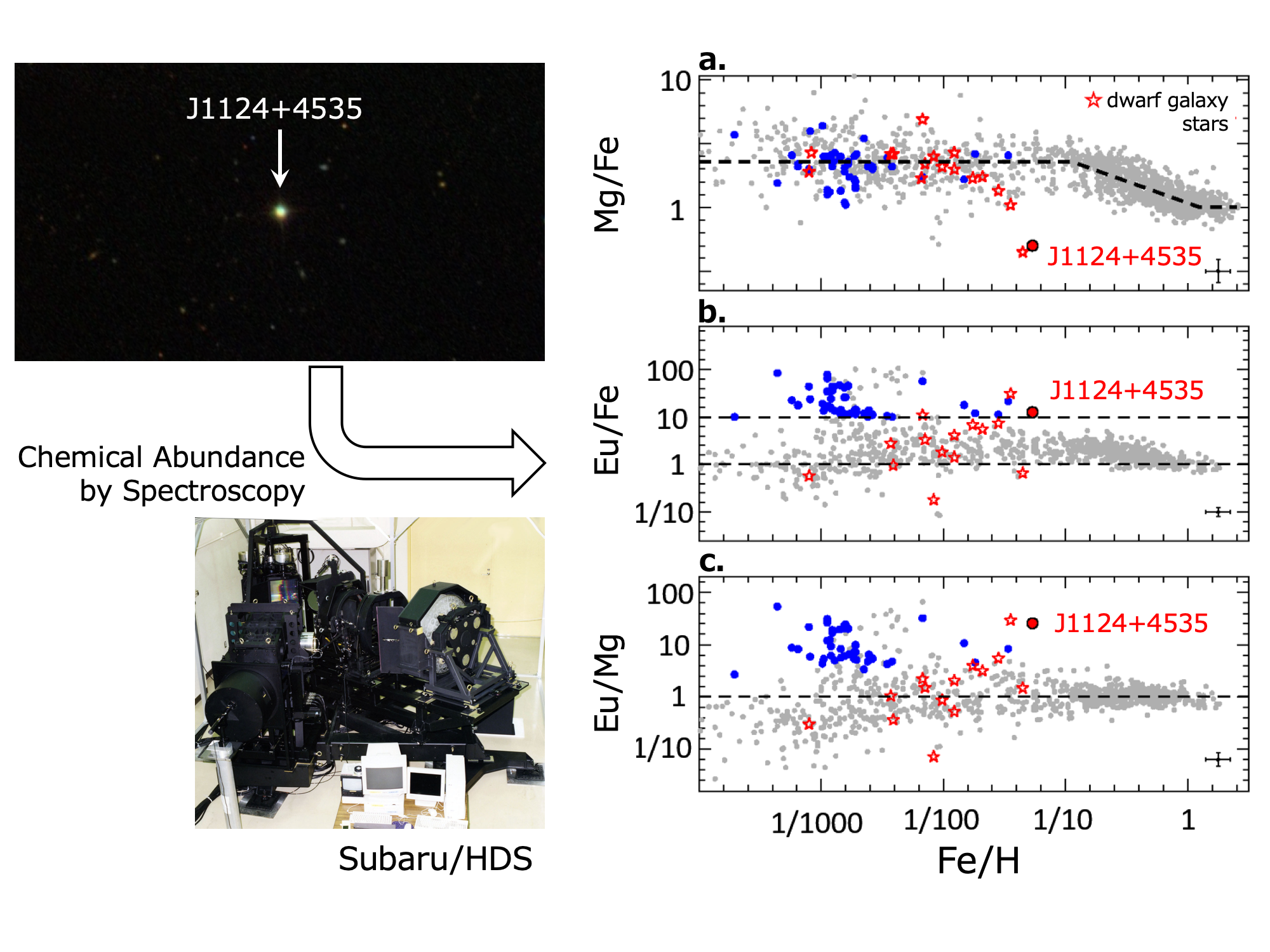 Figure 1: (Top Left) The star J1124+4535 that shows chemical abundance ratios similar to some dwarf galaxy stars (image from SDSS). The color and luminosity of this star are typical as a usual red giant. (Right) Chemical abundance ratios of J1124+4535 measured by Subaru/HDS: (a. Mg/Fe, b. Eu/Fe, c: Eu/Mg). Asterisks indicate stars in the Ursa Minor dwarf galaxy, whereas others mean stars in the Milky Way. The values indicate ratios of number density of atoms of elements normalized to solar-system values. (Credit: NAOJ)

The Milky Way Galaxy has the so-called halo structure around the disk. The sparse structure of old stars has been formed in the early phase of the Galaxy formation. The structure includes stars formed in gas clouds in the growing large galaxy and also those formed in small stellar systems that have accreted onto the Galaxy. Such a scenario is predicted by computer simulation of galaxy formation assuming cold dark matter (Figure 2).

The small stellar systems accreted onto the Galaxy, that would be similar to dwarf galaxies found in the current universe, should have already been disintegrated in the space. However, individual stars should preserve the orbital motion in the Galaxy and their chemical abundance ratios that were determined before the accretion. The focus of current studies in this field is to find evidence for such a scenario of galaxy formation by observations of individual stars in the Milky Way. 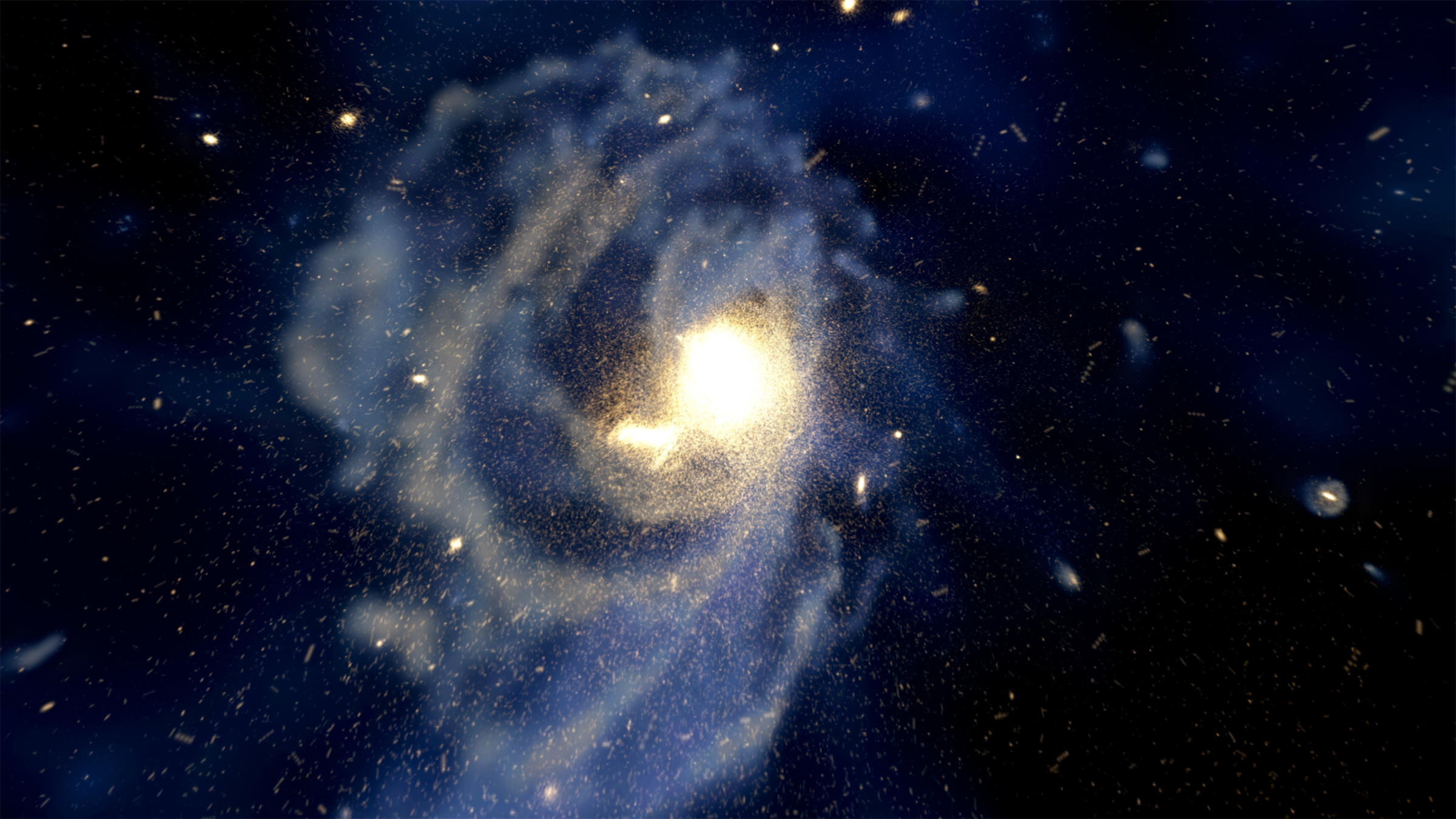 Figure 2: Computer simulation of formation of a spiral galaxy like the Milky Way by 4D2U Project, NAOJ. The halo structure is at least partially formed by the accretion of many small galaxies. The merged galaxies have already been disintegrated, but individual stars have information of the original galaxy. (Credit: Takayuki Saito/Takaaki Takeda/Sorahiko Nukatani/4D2U Project, NAOJ)

A team of astronomers from National Astronomical Observatory of Japan (NAOJ), National Astronomical Observatories of China (NAOC), and other institutes has selected stars in the Milky Way that have relatively low amount of metal from the spectroscopic survey conducted with LAMOST (Note 2) and applied High Dispersion Spectrograph (HDS) on the Subaru Telescope to measure detailed chemical abundances by Japan-China collaboration since 2014. The team has obtained chemical abundances for more than 400 stars, among which one object, J1124+4535 (Figure 1), was identified to have remarkable abundance ratios.

An important result found in the abundance pattern of this object is that this star is similar to relatively metal-rich (less metal-poor) stars found in stars of dwarf galaxies. This indicates that the accreted dwarf galaxy had already chemically evolved at the time of accretion. Namely, the merging events of dwarf galaxies in the formation of the halo structure continued with timescale comparable to dwarf galaxy evolution, which support the current galaxy formation scenario predicted by simulation.


These results were published on April 29, 2019 in Nature Astronomy (Qian-Fan Xing, Gang Zhao, Wako Aoki, Satoshi Honda, Hai-Ning Li, Miho N. Ishigaki & Tadafumi Matsuno, "Evidence for the accretion origin of halo stars with an extreme r-process enhancement)") as Advance Online Publication. This research is supported by the joint program of JSPS-Chinese Academy of Science since 2016, and KAKENHI (Nos. 16H02168 and 17K14249). The observation with the Subaru Telescope was conducted in the intensive program in 2016-2017.

(Note 1) Magnesium (Mg), as well as oxygen and calcium, is known to be provided in the universe by supernova explosions of massive stars. Mg increases in the very early phase of galaxy evolution because the lifetime of massive stars is as short as several million years. Iron (Fe) is, on the other hand, provided by supernova explosions of binary stars including white dwarfs (so-called type Ia supernovae), in addition to explosions of massive stars, resulting in slower increase of Fe in the universe. As a result, stars with low Mg/Fe are formed in smaller stellar systems in which star formation proceeds slower than in large stellar systems.

(Note 2) LAMOST is the spectroscopic survey telescope with very wide field of view (5 arcdegree diameter) that can obtain low resolution spectra for 4000 stars by one shot. From the spectra, stellar metallicity and abundance ratios of some elements are estimated. The survey project since 2012 have already obtained spectra for more than 5 million stars in the Milky Way.

(Note 3) Elements heavier than iron are synthesized by a process in which heavy nuclei grow by capturing neutrons (neutron-capture process), which is different from fusion processes that produce lighter elements. Such a process occurs inside of stars with long time-scale (so-called s-process) and also in explosive events with short time-scale (r-process). The amount of elements produced by the two mechanisms are different. Europium (Eu), as well as uranium and gold, is mostly yielded by the r-process and its abundance is a good indicator of this process. Recent studies for gravitational wave events suggest that mergers of binary neutron stars are major site of the r-process in the universe.

(Note 4) The formation mechanism of this star having such extremely large enhancement of elements produced by the r-process is still a mystery. Merger of binary neutron stars could produce large amount of heavy elements. A star formed in a gas cloud polluted by the product of the merger could have large excess of heavy elements in principle. However, material ejected from the merging event would be diluted by a large amount of surrounding material because the event is very explosive. Solving this problem is important for understanding of star formation in the environment of dwarf galaxies.