Subaru Telescope's observations show auroras at Jupiter's poles are heating the planet's atmosphere more deeply than previously thought – and its near-immediate response to solar winds. This article is based on the press release from Jet Propulsion Laboratory (JPL). 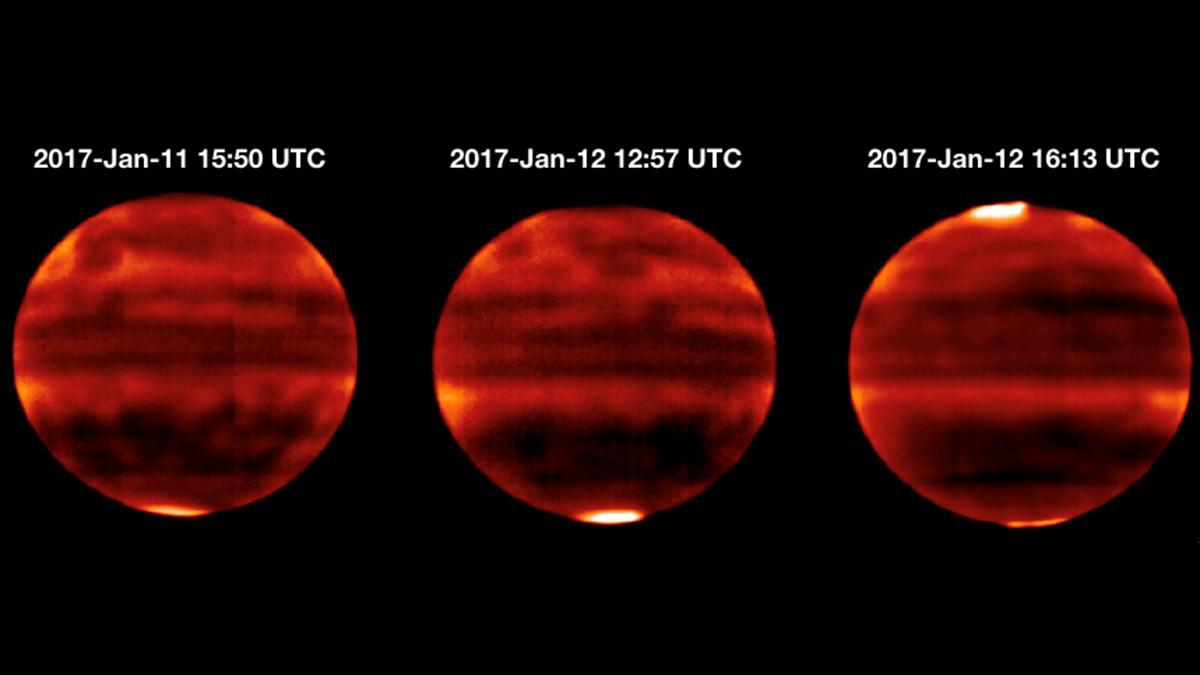 Figure 1: Infrared images of Jupiter, sensitive to its stratospheric temperatures, recorded by the Cooled Mid-Infrared Camera and Spectrograph (COMICS) at the Subaru Telescope at the summit of Mauna Kea, Hawaii. Auroras appear to cause enhanced and variable heating at Jupiter's poles. The heating occurs when the magnetosphere and the solar wind interact. Images were captured just a few hours apart, from Jan. 11-12, 2017 and illustrate how quickly the atmosphere showed effects from solar winds. Regions of the atmosphere that are more yellow and red indicate the hotter regions, where most energetic particles are being deposited by solar winds. (Credit: NAOJ / NASA/JPL-Caltech)

"The impact at Jupiter is an extreme example of space weather," said James Sinclair of NASA's Jet Propulsion Laboratory, who led new research. "We're seeing the solar winds having an effect deeper than is normally seen."

Auroras at Earth's poles (known as the aurora borealis at the North Pole and aurora australis at the South Pole) occur when the energetic particles blown out from the Sun (the solar wind) interact with the gases in our atmosphere. The auroras even heat up our atmosphere. The same thing happens at Jupiter, but the new observations show the heating goes deep, into the lower level of the upper atmosphere, or stratosphere.

"What is startling about the results is that we were able to associate for the first time the variations in solar wind and the response in the stratosphere – and that the response to these variations is so quick," said Glenn Orton, also of JPL and co-author who was part of the observing team.

Within a day of solar winds hitting Jupiter, the chemistry in its atmosphere changed and its temperature rose, scientists found. An infrared image captured during their observing campaign in January, February and May of 2017 clearly shows hot spots near the poles, where Jupiter's auroras are. The scientists based their findings on observations by the Subaru Telescope.

The Cooled Mid-Infrared Camera and Spectrograph (COMICS) mounted on the Subaru Telescope recorded thermal images of Jupiter's stratosphere that are sensitive to temperature.

"Such heating and chemical reactions may tell us something about other planets with harsh environments, and even early Earth," said Yasumasa Kasaba of Tohoku University, who is a co-PI of the observations using the Subaru Telescope.

These observations will also complete the picture of auroral response to the solar wind at shorter wavelengths being made by the Juno mission, as a part of the coordinated campaign of Earth-based support for the mission.