A team of astronomers led by Yoshiharu Shinnaka of Koyama Astronomical Observatory of Kyoto Sangyo University, Japan, has discovered that Comet 17P/Holmes formed in a cold region of the solar nebula far from the Sun. This suggests that Comet 17P/Holmes probably includes highly volatile species abundantly (with low sublimation temperatures below ~50 K) and that sublimation of these volatiles could be responsible for the comet's explosive releases of dust grains. These new insights come from re-analysing mid-infrared spectra of the comet taken by the Cooled Mid-Infrared Camera and Spectrograph (COMICS) on the Subaru Telescope during October 25 to 28, 2007.

Comet 17P/Holmes is a short-period comet with an orbital period of ~7 years. The comet underwent a great outburst starting on October 23, 2007 (when the comet was 2.5 au from the Sun), five months after perihelion at 2.05 au on May 5, 2007. The total magnitude of this outburst reached a maximum brightness of ~2-3 mag in V-band within two days after the outburst, increasing from an initial brightness of ~17 mag. This huge outburst, with a 15 mag brightness increase, was unlike any other. Other than the outburst in 2007, Comet 17P/Holmes had exhibited outbursts in November 1892, when the comet was discovered by E. Holmes, and January 1893. 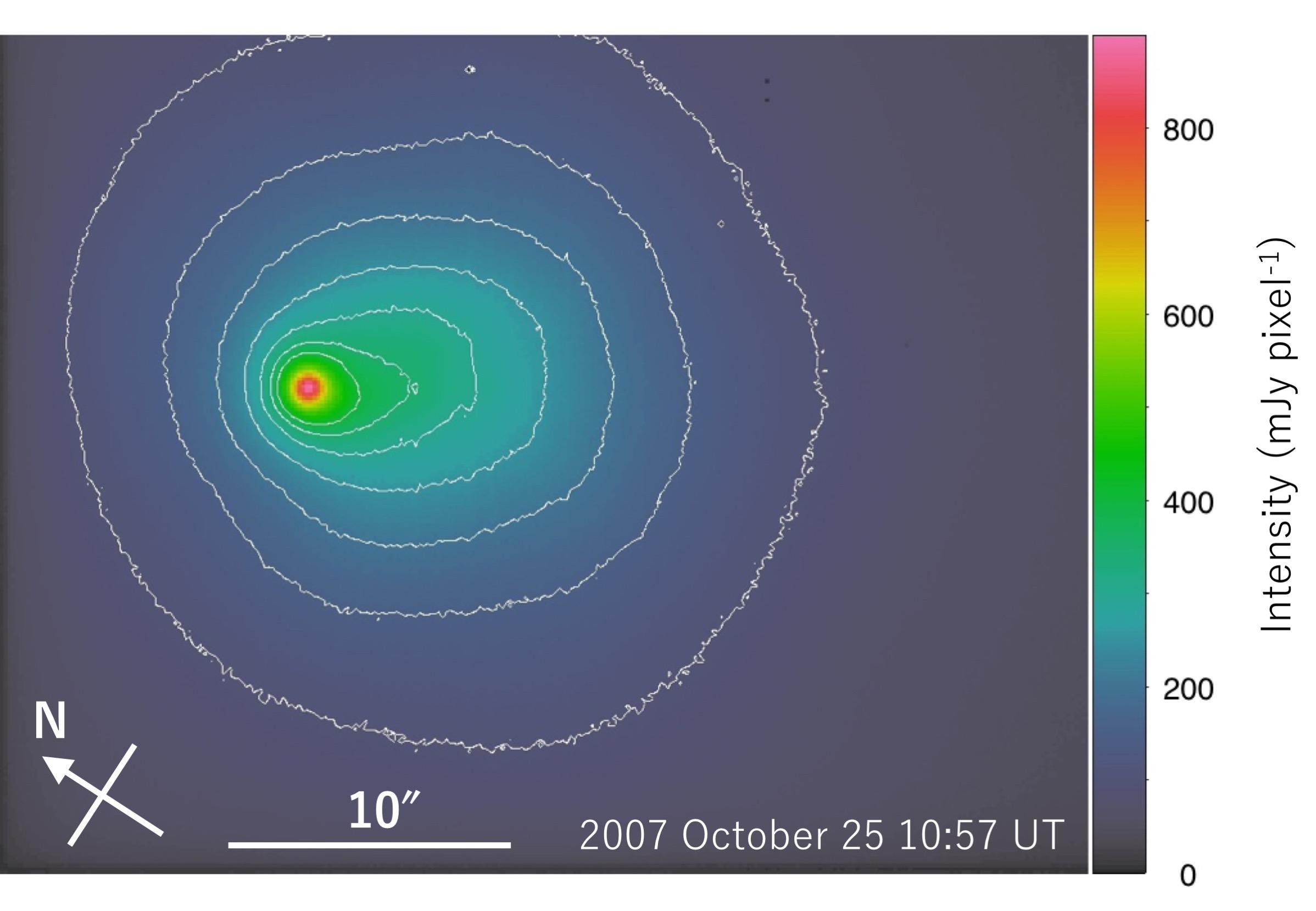 Figure 1: Mid-infrared image of Comet 17P/Holmes on October 25, 2007. The mid-infrared observations of the comet by COMICS on the Subaru Telescope were carried out for four consecutive nights from two days to five days after its great outburst on October 23, 2007 UT. (Credit: NAOJ)

The researchers found that dust grains of Comet 17P/Holmes contain a large amount of amorphous silicates (less crystalline silicates) compared with grains of other comets. This result is evidence that Comet 17P/Holmes formed in a farther, colder region in the solar nebula than other comets. At such a region, it is expected that much CO ice (which has a low sublimation temperature of ~30 K) and amorphous water ices (which through crystallization in the low temperature conditions become an energy source for explosive sublimation) would have existed. 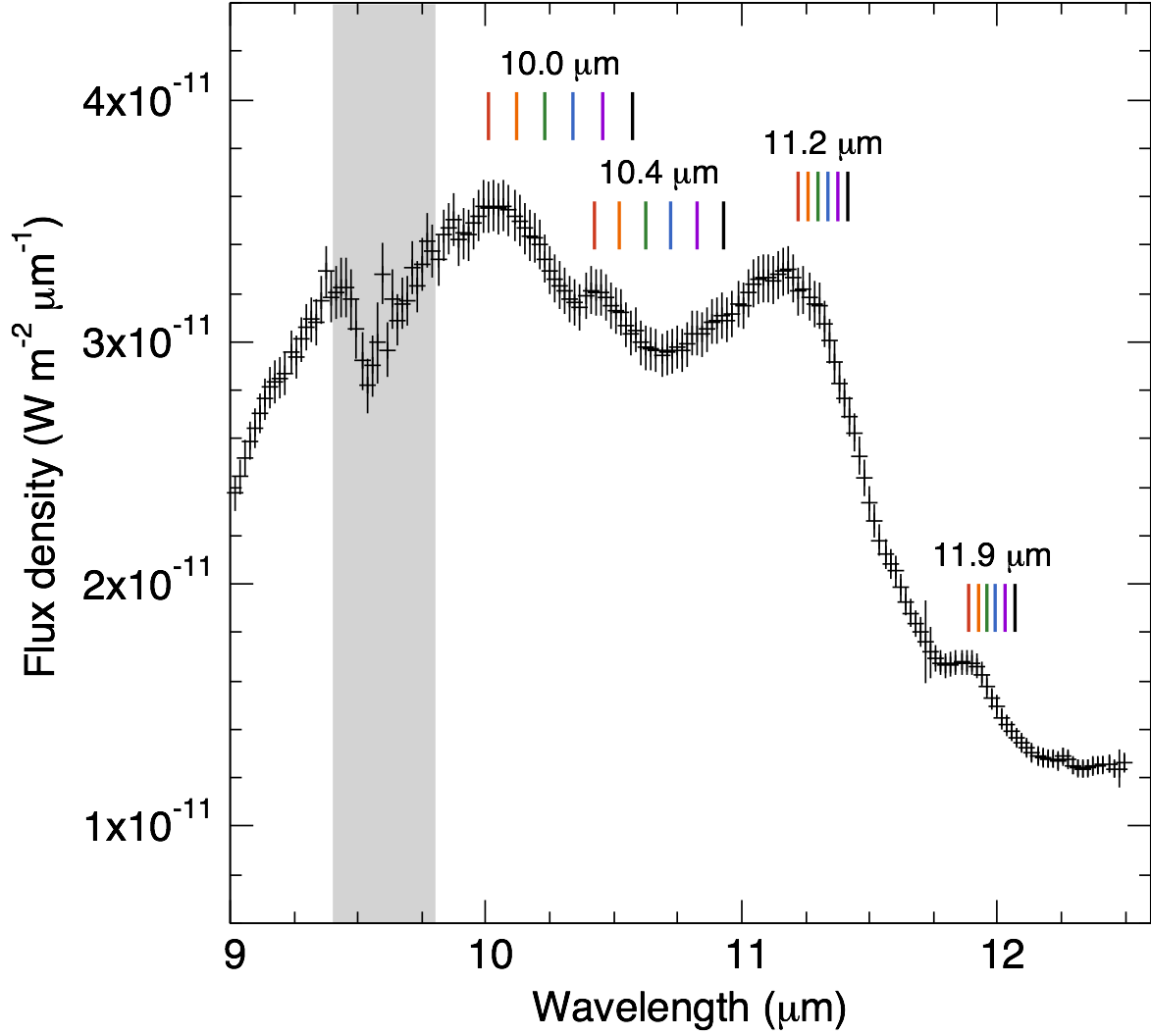 Figure 2: The mid-infrared spectrum of Comet 17P/Holmes on October 25, 2007. Four striking thermal emission features of silicate dust grains are seen around 10 microns. Narrow peaks originate from crystalline silicate and the peak position depends on the Mg/Fe ratio of the silicate grains. The sets of six vertical lines (red, orange, green, blue, purple, and black in order from left to right) indicate peak wavelengths of the 10.0, 10.4, 11.2 and 11.9 microns lines with Mg/(Mg + Fe) ratios of 100% to 0% in 20% intervals. The vertical gray bar is the absorption band of telluric ozone (O3). (Credit: NAOJ)

These results were published on October 31, 2018 in The Astronomical Journal (Shinnaka et al., 156, 242, "Mid-infrared Spectroscopic Observations of Comet 17P/Holmes Immediately After Its Great Outburst in 2007"). This research paper is also available as a preprint (Shinnaka et al., arxiv: 1808.07606) on arxiv.org. This research is supported by Grants-in-Aid from Japan Society for the Promotion of Science Fellows, 15J10864 (YS) and for Scientific Research (C), 17K05381 (TO). This paper is based on data collected at the Subaru Telescope and obtained from SMOKA, which is operated by the National Astronomical Observatory of Japan.