The galaxy Messier 77 (M77) is famous for its super-active nucleus that releases enormous energy across the electromagnetic spectrum, ranging from x-ray to radio wavelengths. Yet, despite its highly active core, the galaxy looks like any normal quiet spiral. There's no visual sign of what is causing its central region to radiate so extensively. It has long been a mystery why only the center of M77 is so active. Astronomers suspect a long-ago event involving a sinking black hole, which could have kicked the core into high gear.

To test their ideas about why the central region of M77 beams massive amounts of radiation, a team of researchers at the National Astronomical Observatory of Japan and the Open University of Japan used the Subaru Telescope to study M77. The unprecedented deep image of the galaxy reveals evidence of a hidden minor merger billions of years ago. The discovery gives crucial evidence for the minor merger origin of active galactic nuclei. 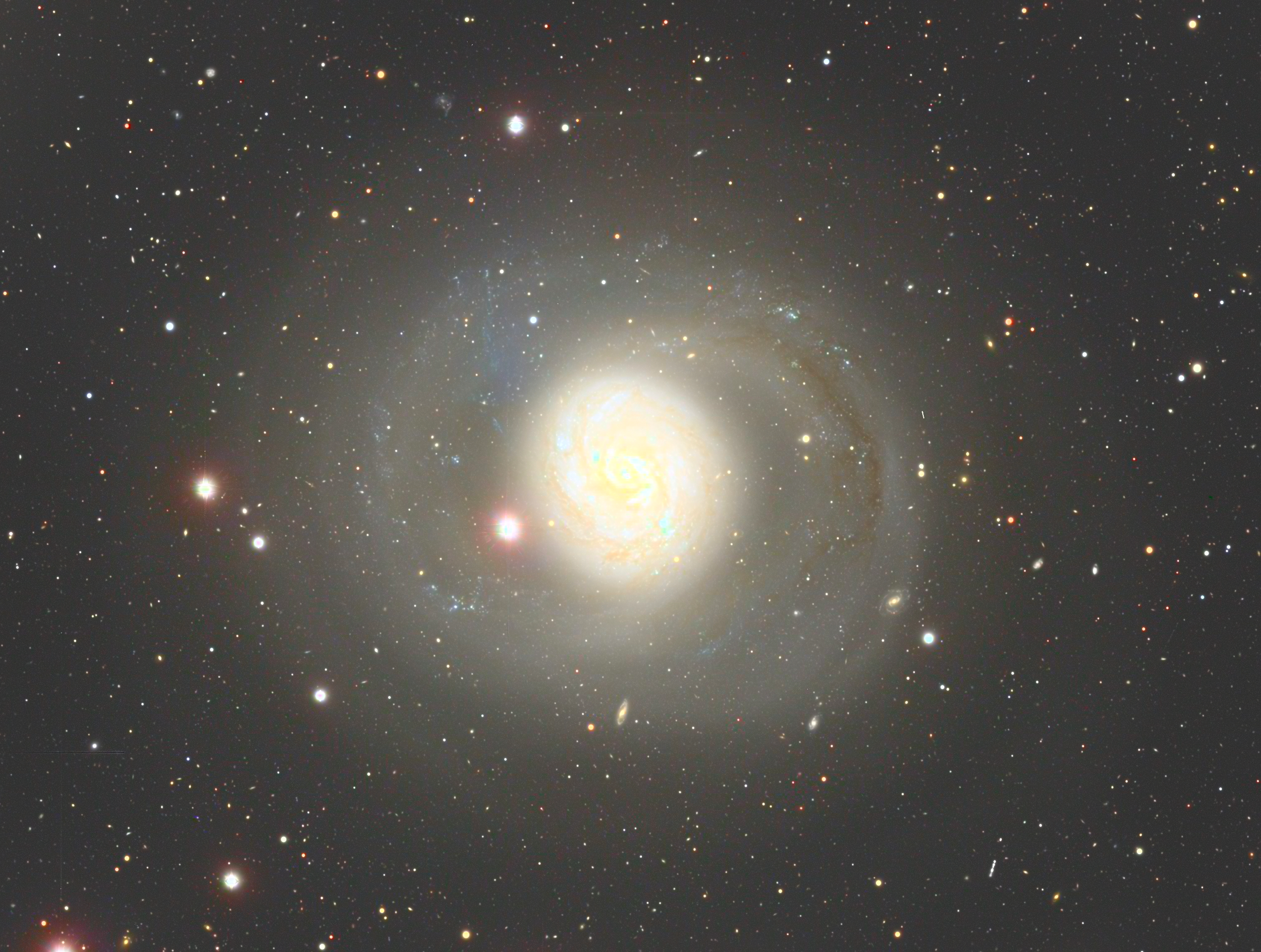 Figure 1: The deep image of Messier 77 taken with the Hyper Suprime-Cam (HSC) mounted at the Subaru Telescope. The picture is created by adding the color information from the Sloan Digital Sky Survey (Note 1) to the monochromatic image acquired by the HSC. (Credit: NAOJ/SDSS/David Hogg/Michael Blanton. Image Processing: Ichi Tanaka)

The Mystery of Seyfert Galaxies

The galaxy Messier 77 (NGC 1068) is famous for harboring an active nucleus at its core that releases an enormous amount of energy. The existence of such active galaxies in the nearby universe was first noted by the American astronomer Carl Seyfert more than 70 years ago. Nowadays they are called the Seyfert galaxies (Note 2). Astronomers think that the source of such powerful activity is the gravitational energy released from superheated matter falling onto a supermassive black hole (SMBH) that resides in the center of the host galaxy. The estimated mass of such a SMBH for M77 is about 10 million times that of the Sun.

It takes a massive amount of gas dumped on the galaxy's central black hole to create such strong energies. That may sound like an easy task, but it's actually very difficult. The gas in the galactic disk will circulate faster and faster as it spirals into the vicinity of the SMBH. Then, at some point the "centrifugal force" balances with the gravitational pull of the SMBH. That actually prevents the gas from falling into the center. The situation is similar to water draining out of a bathtub. Due to the centrifugal force, the rapidly rotating water will not drain out rapidly. So, how can the angular momentum be removed from the gas circling near an active galactic nucleus? Finding the answer to that question is one of the big challenges for researchers today.

A Prediction Posed 18 Years Ago

In 1999, Professor Yoshiaki Taniguchi (currently at the Open University of Japan), the team leader of the current Subaru study, published a paper about the driving mechanism of the active nucleus of Seyfert galaxies such as M 77. He pointed out that a past event – a "minor merger" where the host galaxy ate up its "satellite" galaxy (a small low-mass galaxy orbiting it) – would be the key to activating the Seyfert nucleus (Note 3).

Usually, a minor merger event simply breaks up a low-mass satellite galaxy. The resulting debris is absorbed into the disk of the more massive host galaxy before it approaches the center. Therefore, it was not considered as the main driver of the nuclear activity. "However, the situation could be totally different if the satellite galaxy has a (smaller) SMBH in its center (Note 4)," Professor Taniguchi suggests, "because the black hole can never be broken apart. If it exists, it should eventually sink into the center of the host galaxy."

The sinking SMBH from the satellite galaxy would eventually create a disturbance in the rotating gas disk around the main galaxy's SMBH. Then, the disturbed gas would eventually rush into the central SMBH while releasing enormous gravitational energy. "This must be the main ignition mechanism of the active Seyfert nuclei," Taniguchi argued. "The idea can naturally explain the mystery about the morphology of the Seyfert galaxies," said Professor Taniguchi, pointing out the advantage of the model of normal-looking galaxies also being very active at their cores. (Note 5).

Recent advances in observational technique allow the detection of the extremely faint structure around galaxies, such as loops or debris that are likely made by dynamical interactions with satellite galaxies.. The outermost parts of galaxies are often considered as relatively "quiet" with a longer dynamical timescale than anywhere inside. Simulations show that the faint signature of a past minor merger can remain several billion years after the event. "Such a signature can be a key test for our minor merger hypothesis for Seyfert galaxies. Now it is time to revisit M77," said Taniguchi.

The team's choice to look for 'the past case' was, of course, the Subaru Telescope and its powerful imaging camera, Hyper Suprime-Cam. The observing proposal was accepted and executed on Christmas night 2016. "The data was just amazing," said Dr. Ichi Tanaka, the primary investigator of the project. "Luckily, we could also retrieve the other data that was taken in the past and just released from the Subaru Telescope's data archive. Thus, the combined data we got finally is unprecedentedly deep."

Figure 2 shows the result. The team has identified several notable features outside the bright disk as seen in Figure 1, most of which were not known prior to the observation. There is a faint outer one-arm structure outside the disk to the west. The opposite part of the disk has a ripple-like structure which is clearly different from the spiral pattern. The detected signatures amazingly match to the result of a minor-merger simulation published by other research teams. What is more, the observing team discovered three extremely diffuse and large blobby structures farther outside of the disk. Intriguingly, it seems that two of these diffuse blobs actually constitute a gigantic loop around M77 with a diameter of 250,000 light years. These structures are compelling evidence that M77 ate up its satellite galaxy at least several billion years ago. 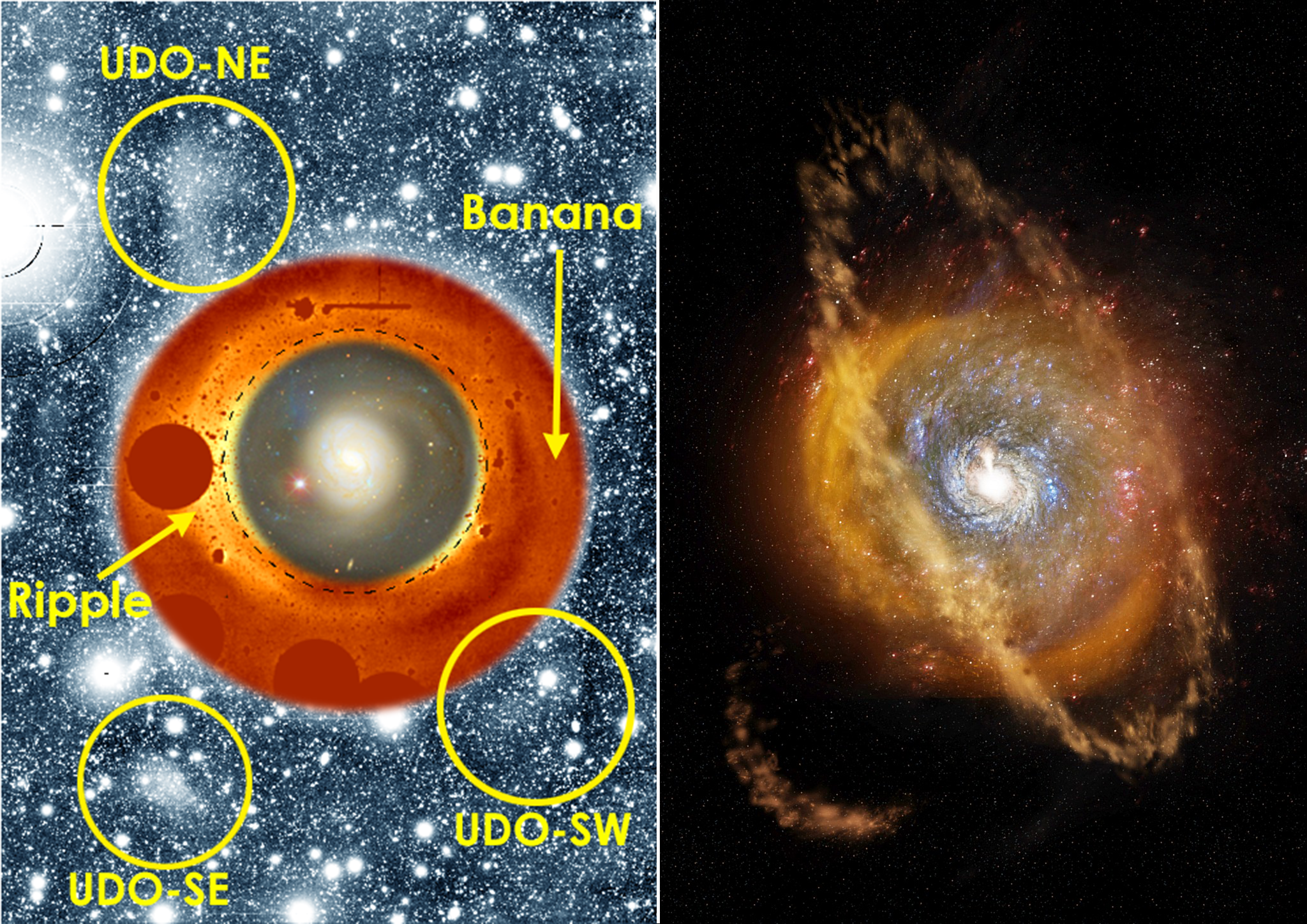 Figure 2: (Left) The newly-discovered, extremely diffuse structures around M77. The innermost color part of the picture shows the bright part of the galaxy (from SDSS: see the center of Figure 1). The middle part in red-brown is the contrast-enhanced expression of the faint one-arm structure (labeled as "Banana") to the right, as well as the ripple structure (labeled as "Ripple") to the left. All the fore/background objects unrelated to M77 are removed during the process. The outermost monochrome part shows the faint ultra-diffuse structures in yellow circles (labelled as "UDO-SE", "UDO-NE", "UDO-SW"). A deep look at them indicates the latter two ("UDO-NE", "UDO-SW") constitute a part of the large loop-like structure. (Credit: NAOJ) (Right) Artist's impression of M77. The illustration in the right is created and copyrighted by Mr. Akihiro Ikeshita. (Credit: Akihiro Ikeshita)

Subaru's great photon-collecting power and the superb performance of the Hyper Suprime-Cam were crucial in the discovery of the extremely faint structures in M77. Their discovery reveals the normal-looking galaxy's hidden violent past.. "Though people may sometimes make a lie, galaxies never do. The important thing is to listen to their small voices to understand the galaxies," said Professor Taniguchi.

The team will expand its study to more Seyfert galaxies using the Subaru Telescope. Dr. Masafumi Yagi, who leads the next phase of the project said, "We will discover more and more evidences of the satellite merger around Seyfert host galaxies. We expect that the project can provide a critical piece for the unified picture for the triggering mechanism for active galactic nuclei."

The result is going to be published in the Volume 69 Issue 6 of the Publications of the Astronomical Society of Japan (I. Tanaka, M.Yagi & Y. Taniguchi 2017, "Morphological evidence for a past minor merger in the Seyfert galaxy NGC 1068")。). The research is financially supported by the Basic Research A grant JP16H02166 by the Grant-in-Aid for Scientific Research program.

Note1: The color image by theSloan Digital Sky Survey used for Figure 1 is under the copyright of David W. Hogg and Michael R. Blanton.

Note 4: Astronomers believe that most galaxies have an SMBH in their central regions, with its mass mysteriously scaled to the mass of the host galaxy. It is also known that some satellite galaxies also have smaller SMBH. For example, Messier 32 (satellite of the Andromeda galaxy) is likely to have a SMBH much heavier than a million times the mass of our Sun. It is however not easy to directly prove the existence of the SMBH for satellite galaxies due to its light weight.