An international team of researchers has found evidence that the brightest stellar explosions in our Universe could be triggered by helium nuclear detonation near the surface of a white dwarf star. Using Hyper Suprime-Cam mounted on the Subaru Telescope, the team detected a type Ia supernova within a day after the explosion, and explained its behavior through a model calculated using the supercomputer ATERUI.

Figure 1: A type Ia supernova detected within a day after exploding. Taken with Hyper Suprime-Cam mounted on the Subaru Telescope. Figure without the labels is linked here. (Credit: University of Tokyo/NAOJ)

Some stars end their lives with a huge explosion called a supernova. The most famous supernovae are the result of a massive star exploding, but a white dwarf, the remnant of an intermediate mass star like our Sun, can also explode. This can occur if the white dwarf is part of a binary star system. The white dwarf accretes material from the companion star, then at some point, it might explode as a type Ia supernova.

Because of the uniform and extremely high brightness (about 5 billion times brighter than the Sun) of type Ia supernovae, they are often used for distance measurements in astronomy. However, astronomers are still puzzled by how these explosions are ignited. Moreover, these explosions only occur about once every 100 years in any given galaxy, making them difficult to catch.

An international team of researchers led by Ji-an Jiang, a graduate student of the University of Tokyo, and including researchers from the University of Tokyo, the Kavli Institute for the Physics and Mathematics of the Universe (IPMU), Kyoto University, and the National Astronomical Observatory of Japan (NAOJ), tried to solve this problem. To maximize the chances of finding a type Ia supernova in the very early stages, the team used Hyper Suprime-Cam (HSC) mounted on the Subaru Telescope, a combination which can capture an ultra-wide area of the sky at once. Also they developed a system to detect supernovae automatically in the heavy flood of data during the survey, which enabled real-time discoveries and timely follow-up observations.

They discovered over 100 supernova candidates in one night with Subaru/Hyper Suprime-Cam, including several supernovae that had only exploded a few days earlier. In particular, they captured a peculiar type Ia supernova within a day of it exploding. Its brightness and color variation over time are different from any previously-discovered type Ia supernova. They hypothesized this object could be the result of a white dwarf with a helium layer on its surface. Igniting the helium layer would lead to a violent chain reaction and cause the entire star to explode. This peculiar behavior can be totally explained with numerical simulations calculated using the supercomputer ATERUI. "This is the first evidence that robustly supports a theoretically predicted stellar explosion mechanism!" said Jiang. 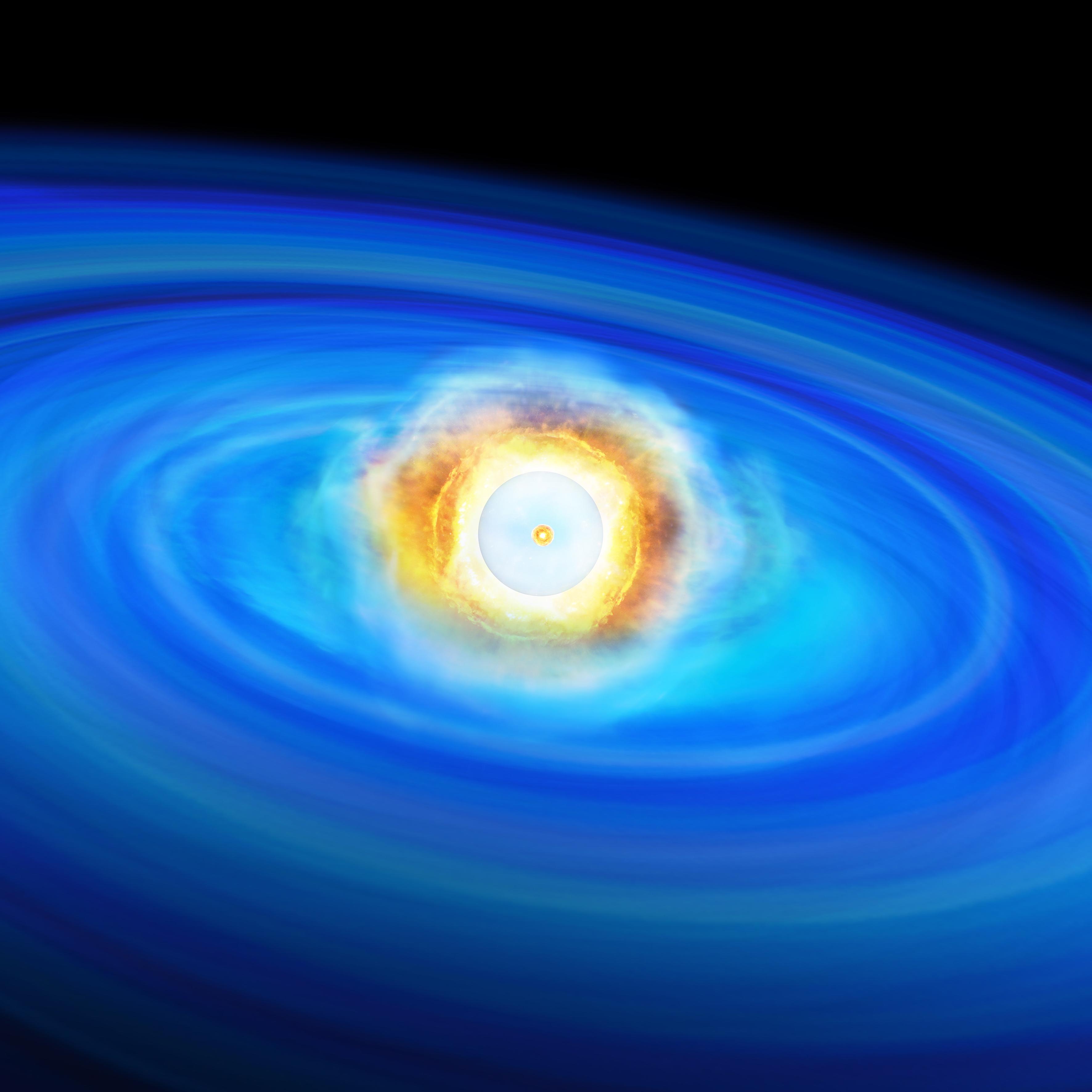 Figure 2: Artist’s impression of the supernova explosion. The nuclear detonation of the surface helium layer triggered an inward shock wave, and now carbon nuclear fusion has begun at the center. (Credit: University of Tokyo)

This result is a step towards understand the beginning of type Ia supernovae. The team will continue to test their theory against other supernovae, by detecting more and more supernovae just after the explosion. The details of their study are to be published in Nature on October 5, 2017 (Jiang et al. 2017, "A hybrid type la supernova with an early flash triggered by helium-shell detonation", Nature).