By using galaxies as giant gravitational lenses, an international group of astronomers has made an independent measurement of Hubble constant, that is, how fast the Universe is expanding. The study was enabled by a powerful combination of ground-based telescopes including those on Maunakea - Subaru Telescope, Canada-France-Hawaii Telescope, Gemini Observatory, W. M. Keck Observatory - as well as the NASA/ESA Hubble Space Telescope and the Spitzer Space Telescope. The newly measured expansion rate for the local Universe has incredibly high accuracy and is consistent with earlier findings. Comparison of Hubble constant measured in this local Universe versus far away Universe measured by spacecraft offer insights into the overall structure of the Universe.

Figure 1: Gravitational lensed quasars studied by H0LiCOW collaboration. This montage shows the five lensed quasars and the foreground galaxies studied by the H0LICOW collaboration. By using these objects astronomers were able to make an independent measurement of the Hubble constant. They calculated that the Universe is actually expanding faster than expected on the basis of our cosmological model. (Credit: NASA, ESA, S. Suyu (Max Planck Institute for Astrophysics), M. W. Auger (University of Cambridge))

The Hubble constant - the rate at which the Universe is expanding - is one of the fundamental quantities describing our Universe. A group of astronomers from the H0LiCOW collaboration, led by Dr. Sherry Suyu (associated with the Max Planck Institute for Astrophysics in Germany, the ASIAA in Taiwan and the Technical University of Munich), used the space telescope such as the NASA/ESA Hubble Space Telescope and ground based telescopes including Subaru Telescope [Note 1] to observe five galaxies in order to arrive at an independent and highly accurate measurement of the Hubble constant [Note 2].

The new measurement is completely independent of - but in excellent agreement with - other measurements of the Hubble constant in the local Universe that used Cepheid variable stars and supernovae as points of reference.

However, the value measured by Suyu and her team, as well as those measured using Cepheids and supernovae, are different from the measurement made by the ESA Planck satellite. But there is an important distinction - Planck measured the Hubble constant for the early Universe by observing the cosmic microwave background.

While the value for the Hubble constant determined by Planck fits with the current understanding of the cosmos, the values obtained by the different groups of astronomers for the local Universe are in disagreement with the accepted theoretical model of the Universe. 'The expansion rate of the Universe is now starting to be measured in different ways with such high precision that actual discrepancies may possibly point towards new physics beyond our current knowledge of the Universe,' elaborates Suyu.

The targets of the study were massive galaxies positioned between Earth and very distant quasars - incredibly luminous galaxy cores. The light from the more distant quasars is bent around the huge masses of the galaxies as a result of strong gravitational lensing [Note 3]. This creates multiple images of the background quasar, some smeared into extended arcs.

Because galaxies do not create perfectly spherical distortions in the fabric of space and the lensing galaxies and quasars are not perfectly aligned, the light from the different images of the background quasar follows paths that have slightly different lengths. Since the brightness of quasars changes over time, astronomers can see the different images flicker at different times, the delays between them depending on the lengths of the paths the light has taken. These delays are directly related to the value of the Hubble constant. "Our method is the most simple and direct way to measure the Hubble constant as it only uses geometry and General Relativity, no other assumptions," explains co-lead Dr. Frédéric Courbin from EPFL, Switzerland.

Using the accurate measurements of the time delays between the multiple images, as well as computer models, has allowed the team to determine the Hubble constant to an impressively high precision: 3.8% [Note 4]. 'An accurate measurement of the Hubble constant is one of the most sought-after prizes in cosmological research today,' highlights team member Dr. Vivien Bonvin, from EPFL, Switzerland. And Suyu adds: 'The Hubble constant is crucial for modern astronomy as it can help to confirm or refute whether our picture of the Universe - composed of dark energy, dark matter and normal matter - is actually correct, or if we are missing something fundamental.'

The data from the Subaru Telescope played a major role in these findings. Dr. Cristian Eduard Rusu, who authored the third paper in this study, used the multi-filter, wide area coverage of the Suprime-Cam (Figure 2) and MOIRCS cameras to estimate accurate colors and physical properties of the various galaxies surrounding the gravitationally lensed quasars used in this, as well as in an upcoming study. Calibrating this information against a large-scale survey obtained with the Canada-France-Hawaii Telescope, as well as a major cosmological simulation, Rusu carefully estimated the collective effect of the surrounding galaxies on the measurement of the Hubble constant.

Suprime-Cam data was obtained by Professor Chris Fassnacht, and the MOIRCS data obtained by Fassnacht and Rusu. Rusu recalls his experience at the Subaru Telescope: 'We were able to obtain the necessary data in each filter in just minutes, as opposed to multiple hours at smaller telescopes. Subaru Telescope was ideal for our study because of the wide field of view images of excellent quality provided by Suprime-Cam as well as MOIRCS.'

Fassnacht echoes similar impressions: 'I was very excited when I first saw the images from Suprime-Cam. We had absolutely fantastic observing conditions on that night, and the combination of the excellent image quality and the very large field of view provided by the Suprime-Cam data really blew me away. And I want to add that I was also extremely impressed by the images that we got using MOIRCS. Those high quality images provided us with the depth and the full field of view that we needed. The Subaru Telescope data (Suprime-Cam plus MOIRCS) were absolutely critical for the analysis in Paper III.' 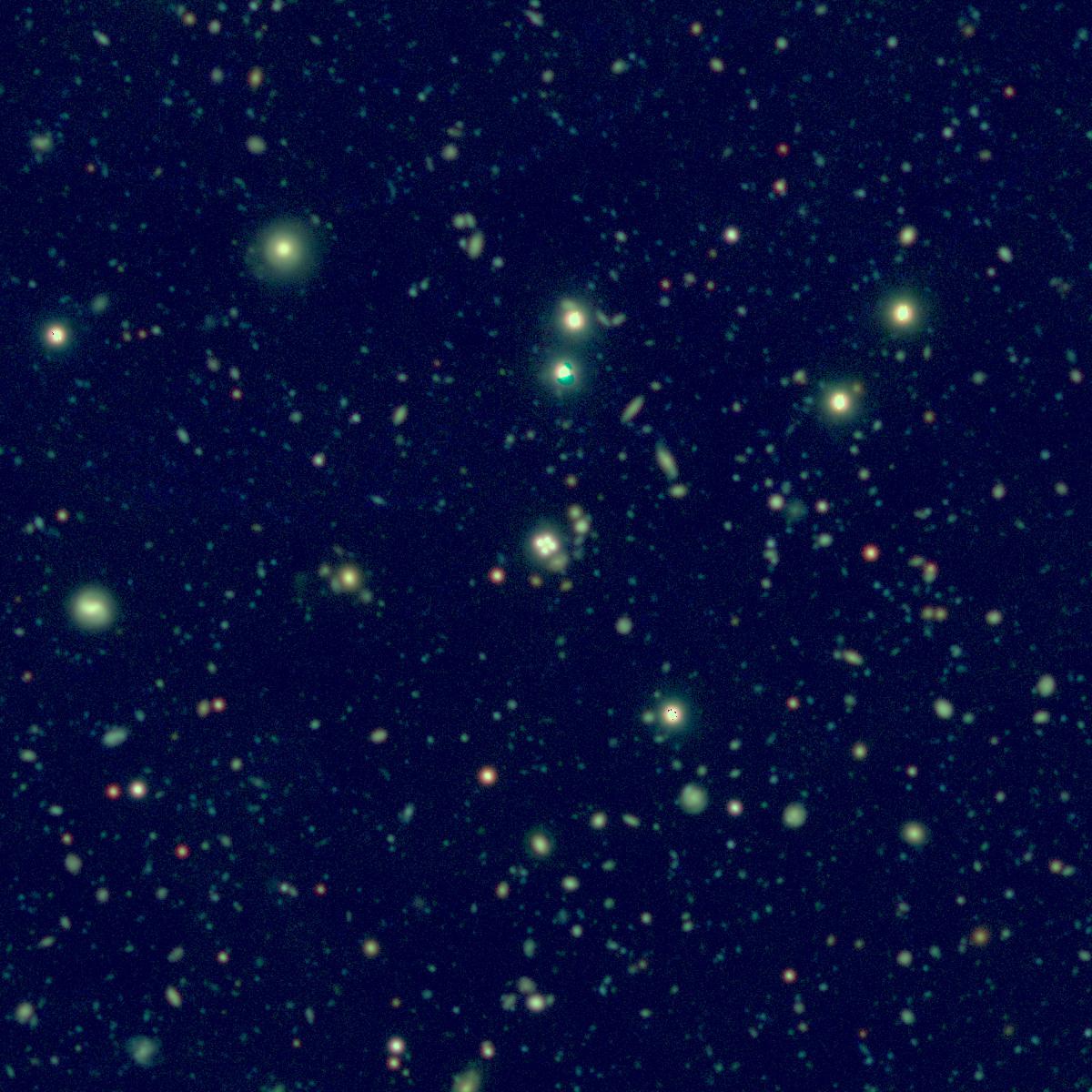 Figure 2: Color composite image of the field around HE 0435-1223, one of the gravitationally lensed quasars used in this study. The 4 cross-like quasar images stand out at the center of the image, surrounded by various other galaxies and stars. The image is a combination of data in the g, r and i filters, taken with Subaru Suprime-Cam, and is 4 arc minutes in length on each side (Credit: C. E. Rusu, C. D. Fassnacht / NAOJ).

This research was presented in a series of papers to appear in the Monthly Notices of the Royal Astronomical Society [Note 5].

2.The gravitational lensing time-delay method that the astronomers used here to achieve a value for the Hubble constant is especially important owing to its near-independence of the three components our Universe consists of: normal matter, dark matter and dark energy. Though not completely separate, the method is only weakly dependent on these.

3.Gravitational lensing was first predicted by Albert Einstein more than a century ago. All matter in the Universe warps the space around itself, with larger masses producing a more pronounced effect. Around very massive objects, such as galaxies, light that passes close by follows this warped space, appearing to bend away from its original path by a clearly visible amount. This is known as strong gravitational lensing.

The international team consists of: