Did Star Formation Regulation Change as the Universe Evolve?

An international team led by scientists at the Subaru Telescope and Eidgenössische Technische Hochschule (ETH) Zürich in Switzerland used the W. M. Keck Observatory (Note 1) to study the role of star formation rates in metal contents of distant galaxies. What they discovered is that the amount of metals is very similar irrespective of galaxies' star formation activity, raising new questions about star-forming theory. Their findings were published in the Astrophysical Journal this week.

Using the Keck I telescope – one of the two world's largest optical and infrared telescopes at Keck Observatory – equipped with the MOSFIRE (Note 2) instrument, the scientists gathered data on 41 normal, star-forming galaxies found in the Universe 11 billion years from today (Figure 1). 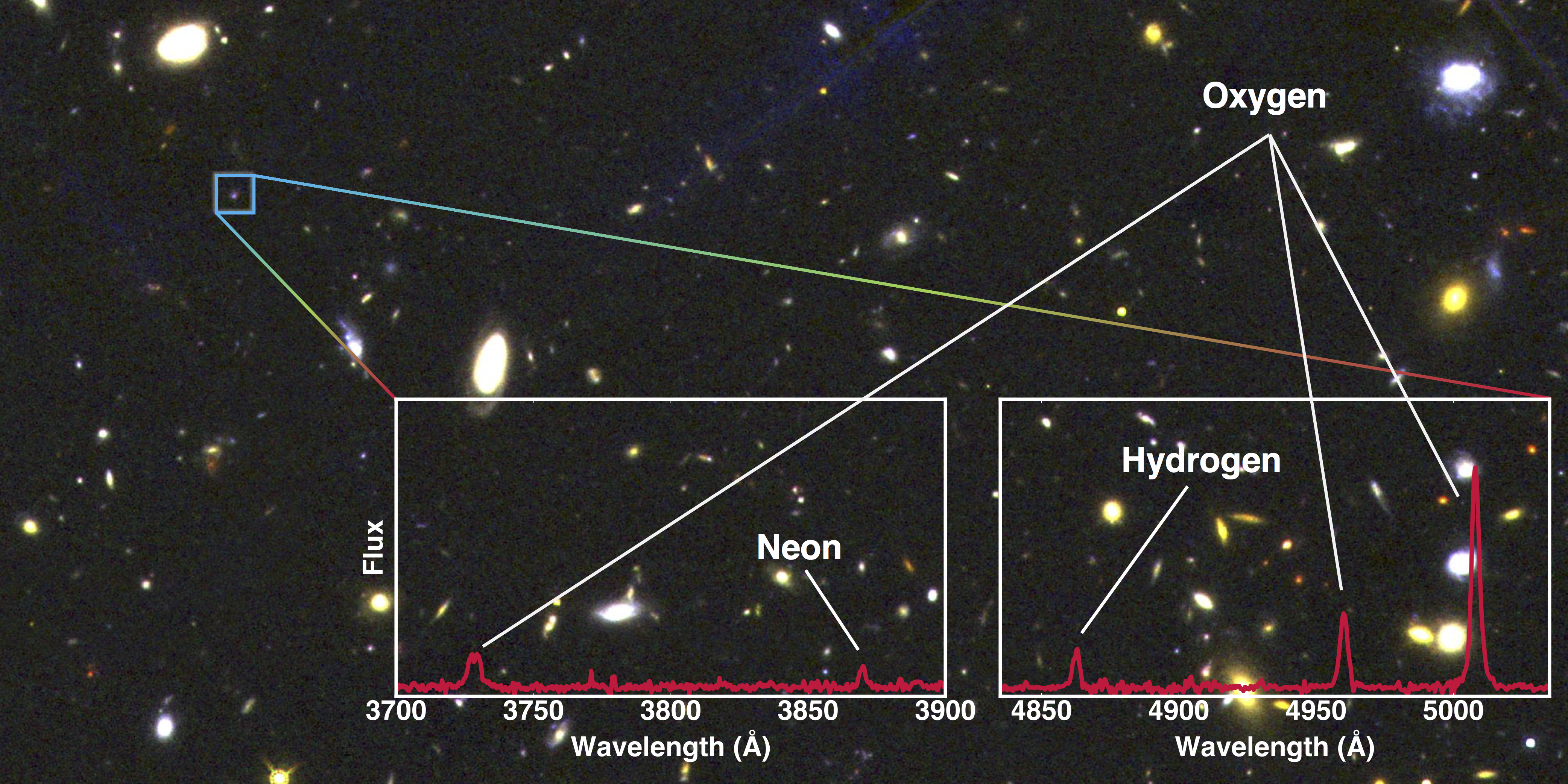 Figure 1: A galaxy observed in this study (surrounded by a blue rectangle). The light we received from the galaxy in the distant Universe tells us - from hydrogen, oxygen, and neon emission lines - that they followed a different rule to produce the heavy elements. (Credit: 3D-HST / NASA / ESA / STScI)

The team found typical galaxies forming stars in the Universe 2 billion years after the Big Bang have only twenty percent of metals (elements heavier than Helium) compared with those in the present day Universe. They also discovered the metal content is independent of the strength of the star-formation activity – in stark contrast with what is known for recently formed, or nearby galaxies (Figure 2).

"The galaxies we studied are very faint because they are so far away that light needs more than 11 billion years to reach us," said Masato Onodera, the lead author of the paper. "Therefore, the superb light-gathering ability of the 10 meter Keck Observatory telescope was crucial to accomplish this study." He led the study while he was at ETH Zürich and hence moved to the Subaru Telescope.

Gathering the photons is only part of the job; breaking it down into data that could be analyzed by the team was the job of Keck Observatory's latest instrument, MOSFIRE.

"MOSFIRE allowed us to observe multiple objects simultaneously with an exquisite sensitivity, enabling us to collect spectra of many galaxies very efficiently," he said. "We saw number of spectral features emitted by ionized atoms in the galaxies such as hydrogen, oxygen, and neon, which allowed us to determine the metal content of the galaxies."

In addition to the telescope time awarded to them through the California Institute of Technology, the team utilized time exchange program between the 8.2-meter Subaru Telescope and the telescopes of Keck Observatory to complete the research.

Metal content in star-forming galaxies is the result of a complex interplay between gas coming into the galaxy, star formation in the galaxy, and gas outflowing from the galaxy in the cosmological context. How much metal is in the system and whether the correlation between the metal content and star formation activity exists provide important clues how galaxy evolve in a distant Universe. 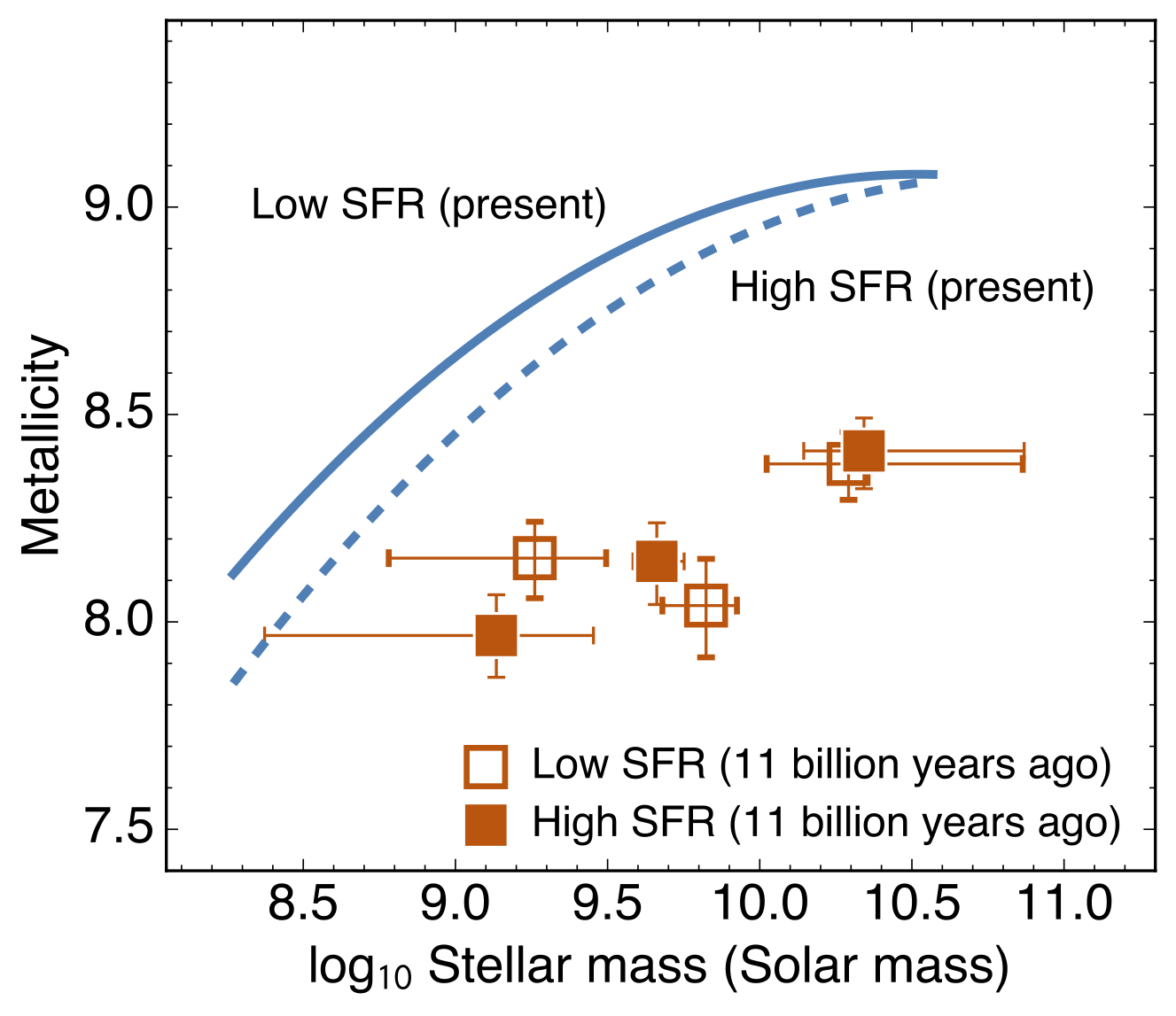 Figure 2: A diagram showing the star formation rate (SFR) of distant galaxies (11 billion years ago) and today's galaxies (present) versus their metallicity. The former does not show any distinction in the metallicities with respect to the SFRs, while the latter is divided into two distinct metal contents according to their SFRs. Horizontal axis is the weight of the galaxy in the unit of solar mass. (Credit: NAOJ)

"If you extrapolate what is known in the local Universe, you would have expected a higher metallicity in less active star-forming galaxies than they found," said Hien Tran, staff astronomer at Keck Observatory who was not part of the finding. "It's part of the normal stellar and galaxy evolution. Onodera's team realized the role of star formation is not as strong at great distances as it is at zero distance. Understanding the interplay between metallicity, star formation rates and the mass of star forming galaxies will help us better understand galaxy evolution."

Because the team did not see any influence of the strength of star formation in the metal enrichment in distant galaxies, it is telling that the physical condition regulating star formation in galaxies in the early Universe is possibly different from that seen in the present-day Universe. This could be related to the fact that star formation rate cannot keep up with the gas accretion rate from the cosmic web.

1.The W. M. Keck Observatory operates the two, 10-meter optical/infrared telescopes near the summit of Maunakea on the Island of Hawaiʻi, neighboring the Subaru Telescope.

2.MOSFIRE (Multi-Object Spectrograph for Infrared Exploration) is a highly efficient instrument that can take images or up to 46 simultaneous spectra. A sensitive state-of-the-art detector and electronics system enables MOSFIRE to obtain observations of very faint objects.