An international team led by researchers at the Academia Sinica Institute of Astronomy and Astrophysics (ASIAA) has used a new infrared imaging technique to reveal dramatic moments in star and planet formation. These seem to occur when surrounding material falls toward very active baby stars, which then feed voraciously on it even as they remain hidden inside their birth clouds. The team used the HiCIAO (High Contrast Instrument for the Subaru Next-Generation Adaptive Optics) camera on the Subaru 8-meter Telescope in Hawaii to observe a set of newborn stars. The results of their work shed new light on our understanding of how stars and planets are born (Figure 1). 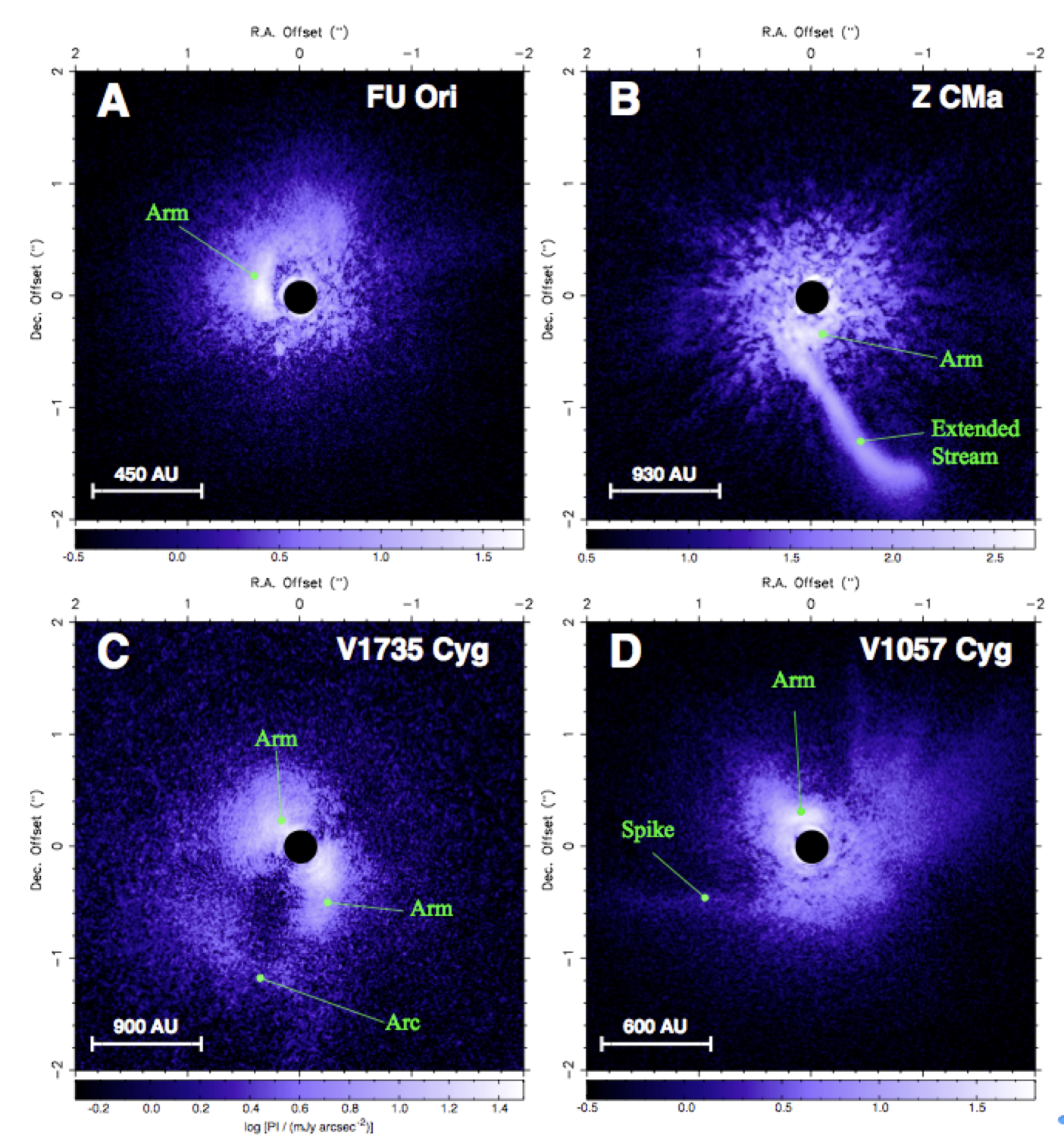 Figure 1: Circumstellar structures revealed by Subaru-HiCIAO. The scale bars are shown in AUs (astronomical units). One AU is the average distance from the sun to the earth. The gas and dust surrounding baby stars (their food) are significantly more extended than our solar system. Here we show the first observations of such complex structures around active young stars. Figure without the labels is linked here. (Credit: Science Advances, H. B. Liu.)

The Process of Star Birth

Stars are born when giant clouds of dust and gas collapse under the pull of their own gravity. Planets are believed to be born at nearly the same time as their stars in the same disk of material. However, there are still a number of mysteries about the detailed physical processes that occur as stars and planets form (Figure 2).
zoom 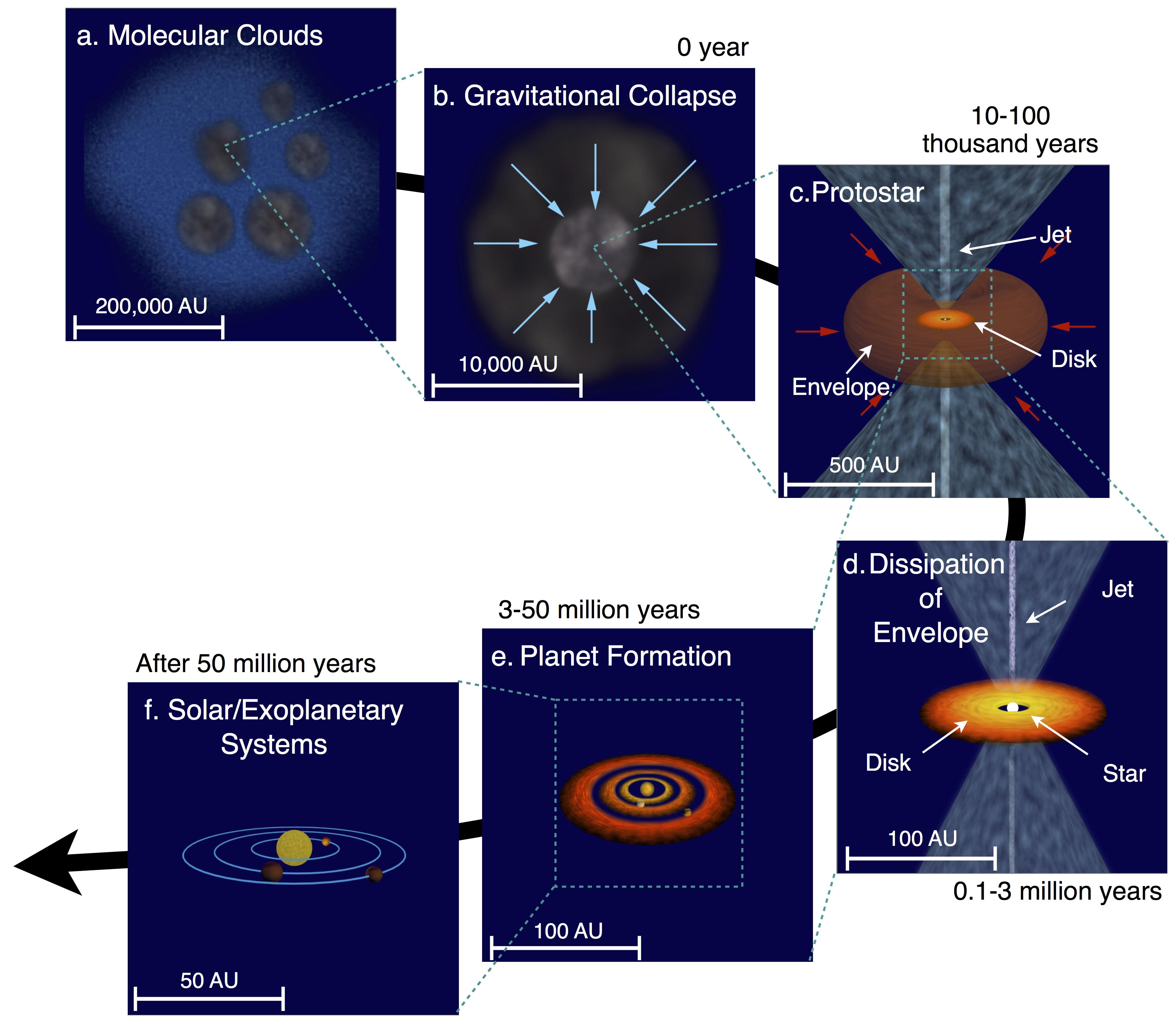 Figure 2: A schematic diagram of star and planet formation based on Green (2001). (Credit: ASIAA)

The giant collections of dust and gas where stars form are called "molecular clouds" because they are largely made up of molecules of hydrogen and other gases. Over time, gravity in the densest regions of these clouds gathers in the surrounding gas and dust, via a process called "accretion". It is often assumed that this process is smooth and continuous (Figure 2). However, this steady infall explains only a small fraction of the final mass of each star that is born in the cloud. Astronomers are still working to understand when and how the remaining material is gathered in during the process of star and planet birth.

A few stars are known to be associated with a sudden and violent "feeding" frenzy from inside their stellar nursery. When they gluttonize on the surrounding material, their visible light increases very suddenly and dramatically, by a factor of about a hundred. These sudden flareups in brightness are called "FU Orionis outbursts" because they were first discovered toward the star FU Orionis.

Not many stars are found to be associated with such outbursts — only a dozen out of thousands. However, astronomers speculate that all baby stars may experience such outbursts as part of their growth. The reason we only see FU Ori outbursts toward a few newborn stars is simply because they are relatively quiet most of the time.

One key question about this mysterious facet of starbirth is "What are the detailed physical mechanisms of these outbursts?" The answer lies in the region surrounding the star. Astronomers know the optical outbursts are associated with a disk of material close to the star, called the "accretion disk". It becomes significantly brighter when the disk gets heated up to temperatures similar to those of lava flows here on Earth (around 700 to 1200 C or 1292 to 2182 F) like the one flowing from Kilauea volcano area in the island of Hawaii. Several processes have been proposed as triggers for such outbursts and astronomers have been investigating them over the past few decades.

An international team lead by Drs. Hauyu Baobab Liu and Hiro Takami, two researchers at ASIAA, used a novel imaging technique available at the Subaru Telescope to tackle this issue. The technique – imaging polarimetry with coronagraphy – has tremendous advantages for imaging the environments in the disks. In particular, its high angular resolution and sensitivity allow astronomers to "see" the light from the disk more easily. How does this work?

Circumstellar material is a mixture of gas and dust. The amount of dust is significantly smaller than the amount of gas in the cloud, so it has little effect on the motion of the material. However, dust particles scatter (reflect) light from the central star, illuminating all the surrounding material. The HiCIAO camera mounted on the Subaru 8.2-meter telescope, one of the largest optical and near-infrared (NIR) telescopes in the world, is well-suited to observing this dim circumstellar light. It successfully allowed the team to observe four stars experiencing FU Ori outbursts.

The team's target stars are located 1,500-3,500 light-years from our solar system. The images of these outbursting newborns were surprising and fascinating, and nothing like anything previously observed around young stars (Figure 1). Three have unusual tails. One shows an "arm", a feature created by the motion of material around the star. Another shows odd spiky features, which may result from an optical outburst blowing away circumstellar gas and dust. None of them match the picture of steady growth shown in Figure 2. Rather, they show a messy and chaotic environment, much like a human baby eating food.

To understand the structures observed around these newborn stars, theorists on the team extensively studied one of several mechanisms proposed to explain FU Ori outbursts. It suggests that gravity in circumstellar gas and dust clouds creates complicated structures that look like cream stirred into coffee (Figure 3, left). These oddly shaped collections of material fall onto the star at irregular intervals. The team also conducted further computer simulations for scattered light from the outburst. Although more simulations are required to match the simulations to the observed images, these images show that this is a promising explanation for the nature of FU Ori outbursts (Figure 3). 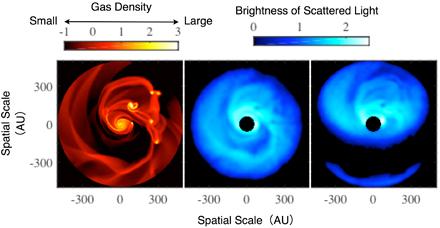 Figure 3: Images made from computer simulations based on one theory for violent growth of a star. (Left) Simulations of the motion of circumstellar materials falling onto a baby star. (Middle and right). Models of how we would observe the structure in scattered light, seen from two different angles. (Credit: Science Advances, H. B. Liu.)

Studying these structures may also reveal how some planetary systems are born. Astronomers know some exoplanets (planets around other stars) are found extremely far away from their central stars. Sometimes they orbit more than a thousand times the distance between the Sun and Earth, and significantly larger than the orbit of Neptune (which is about 30 times the distance between the Sun and Earth). These distances are also much larger than orbits explained by standard theories of planet formation. Simulations of complicated circumstellar structures like the ones seen in the HiCIAO views also predict that some dense clumps in the material may become gas giant planets. This would naturally explain the presence of exoplanets with such large orbits.

In spite of these exciting new results, there is a still great deal more work to do to understand the mechanisms of star and planet birth. More detailed comparisons between observation and theory are needed. Further observations, particularly with the Atacama Large Millimeter/Submillimeter Array, will take our gaze more deeply into circumstellar gas and dust clouds. The array allows observations of the surrounding dust and gas with unprecedented angular resolution and sensitivity. Astronomers are also planning to construct telescopes significantly larger than Subaru in the coming decades – including the Thirty Meter Telescope (TMT) and the European Extremely Large Telescope. These should allow detailed studies of regions very close to newborn stars.

1.Astronomical Unit (AU) is a unit of distance. 1 AU corresponds to the average distance between the Earth and the Sun.

This research was supported by the Ministry of Science and Technology (MoST) of Taiwan (Grant Nos. 103-2112-M-001-029 and 104-2119-M-001-018). E.I.V. acknowledges the support from the Russian Ministry of Education and Science Grant 3.961.2014/K and RFBR grant 14-02-00719. R.D. was supported by Hubble Fellowship. M.M.D. acknowledges support from the Submillimeter Array through an SMA Postdoctoral Fellowship.
These observational results were published by Liu et al. as "Circumstellar Disks of the Most Vigorously Accreting Young Stars" in the Science Advances on February 5, 2016.

This research was conducted by: