An international team of scientists using a combination of radio and optical telescopes identified the distant location of a fast radio burst (FRB) for the first time. This discovery has allowed them to confirm the current cosmological model of the distribution of matter in the universe.

The fast radio burst was detected on April 18, 2015 by the Commonwealth Scientific and Industrial Research Organisation (CSIRO)'s 64-meter Parkes radio telescope in Australia. That observation triggered an international alert to other telescopes to follow up with their observations. Within a few hours, CSIRO's Australian Telescope Compact Array (ATCA), as well as other facilities around the world were looking for the signal.

FRBs are mysterious bright radio flashes generally lasting only a few milliseconds. Their cause is still unknown and there is a long list of phenomena potentially associated with them. FRBs are very difficult to detect; before this discovery only 16 had been observed.

"In the past, FRBs have been found by sifting through data months or even years later. By that time it is too late to do follow up observations," said Dr. Evan Keane, Project Scientist at the Square Kilometre Array Organisation (SKAO) and the lead scientist behind the study. To remedy this, the team developed its own observing system at Swinburne University of Technology in Australia to detect FRBs within seconds, and to immediately alert other telescopes while there is still time to search for more evidence in the aftermath of the initial flash (Figure 1). 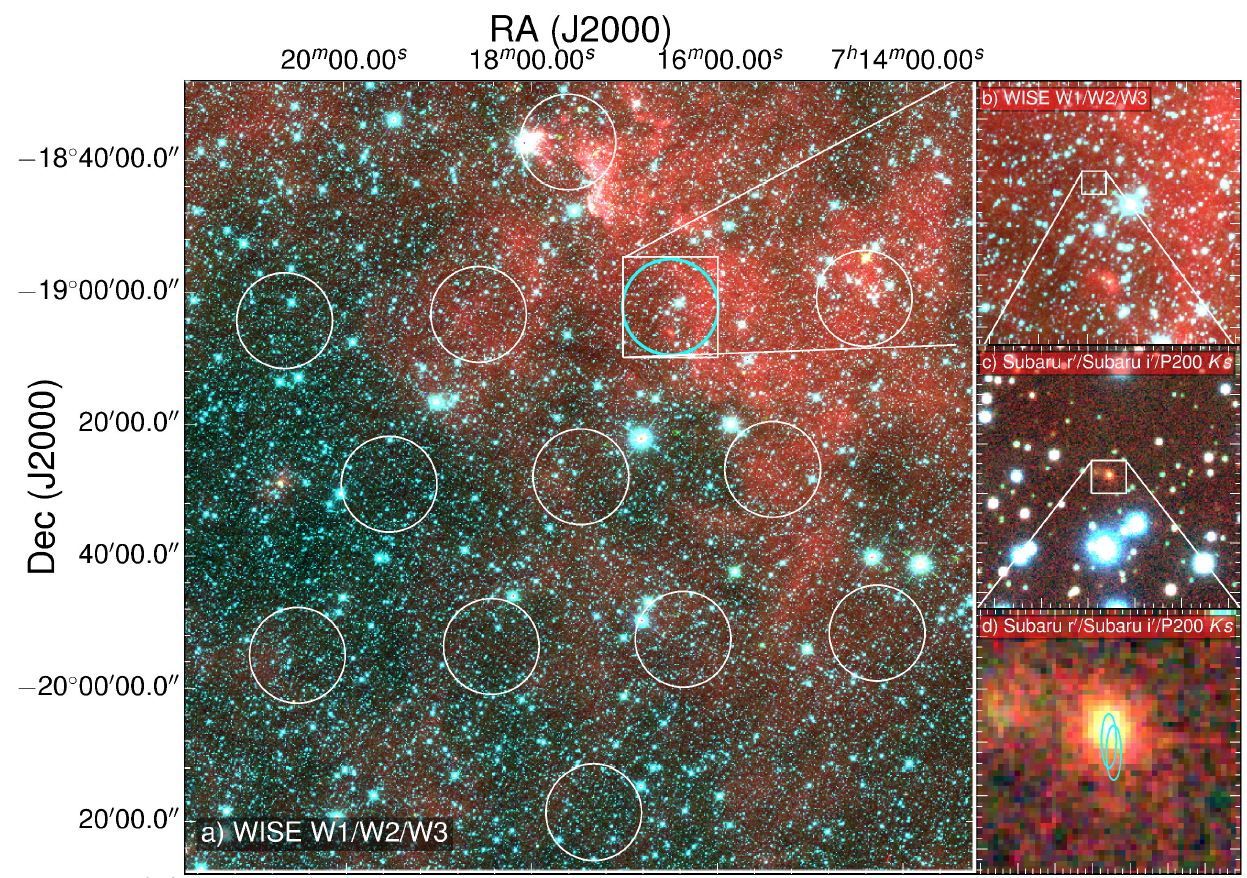 Figure 1: This image shows the field of view of the Parkes radio telescope on the left. On the right are successive zoom-ins in on the area where the signal came from (cyan circular region). The image at the bottom right shows the Subaru Telescope's image of the FRB galaxy, with the superimposed elliptical regions showing the location of the fading 6-day afterglow seen with ATCA. Image Credit: D. Kaplan (UWM), E. F. Keane (SKAO).

Thanks to the ATCA's six 22-meter dishes and their combined resolution, the team was able to pinpoint the location of the signal with much greater accuracy than has been possible in the past. The observations revealed a radio afterglow that lasted for around six days before fading away. This afterglow enabled astronomers to pinpoint the location of the FRB about a thousand times more precisely than for previous observed events (Figure 1).

The team members from the University of Tokyo (UTokyo), the National Astronomical Observatory of Japan (NAOJ), and Konan University next examined an optical image of the FRB taken a day after the first flash by the NAOJ's 8.2-meter Subaru Telescope in Hawaii. The image revealed a possible source: an elliptical galaxy some 6 billion light-years away. Follow-up spectroscopic observations by the Subaru Telescope yielded a redshift measurement for the source, which allowed astronomers to calculate its distance. (Redshift is the speed at which the galaxy is moving away from us due to the expansion of the universe). "For the first time, we have identified the host galaxy and measured the distance to a fast radio burst," said Dr. Tomonori Totani, professor at the UTokyo Department of Astronomy, who led the optical observation effort.

Doing Cosmology with an FRB

FRBs show a frequency-dependent dispersion (Figure 2), a delay in the radio signal caused by how much material it has gone through. "Until now, the dispersion measure is all we had. By also having a distance we can now measure how dense the material is between the point of origin and Earth, and compare that with the current model of the distribution of matter in the universe" explained Dr. Simon Johnston, of CSIRO's Astronomy and Space Science division. "Essentially, this lets us weigh the universe, or at least the normal matter it contains."

In the current model, the universe is believed to be made of 70% dark energy, 25% dark matter and 5% 'ordinary' matter, the matter that makes up everything we see. However, through observations of stars, galaxies and hydrogen, astronomers have only been able to account for about half of the ordinary matter, the rest cannot be seen directly and so has been referred to as 'missing.'

"The good news is our observations and the model match. We have found the missing matter" explained Dr. Keane. "It's the first time a fast radio burst has been used to conduct a cosmological measurement."

Finding the Cause of FRBs

Still, the origin of FRBs is a mystery. The fact that the host galaxy is an elliptical galaxy, which is not actively forming young stars, implies that it takes a long time for a stellar system to evolve into an FRB. This favors scenarios like compact binary star mergers, but there is no direct evidence yet.

Future observations of FRBs in a variety of wavebands may well reveal more details about this enigmatic astronomical phenomenon. Optical observations are essential as demonstrated by the present study. Instruments such as the Subaru Telescope and the upcoming Thirty Meter Telescope (TMT) in future will play major roles as FRBs occur. 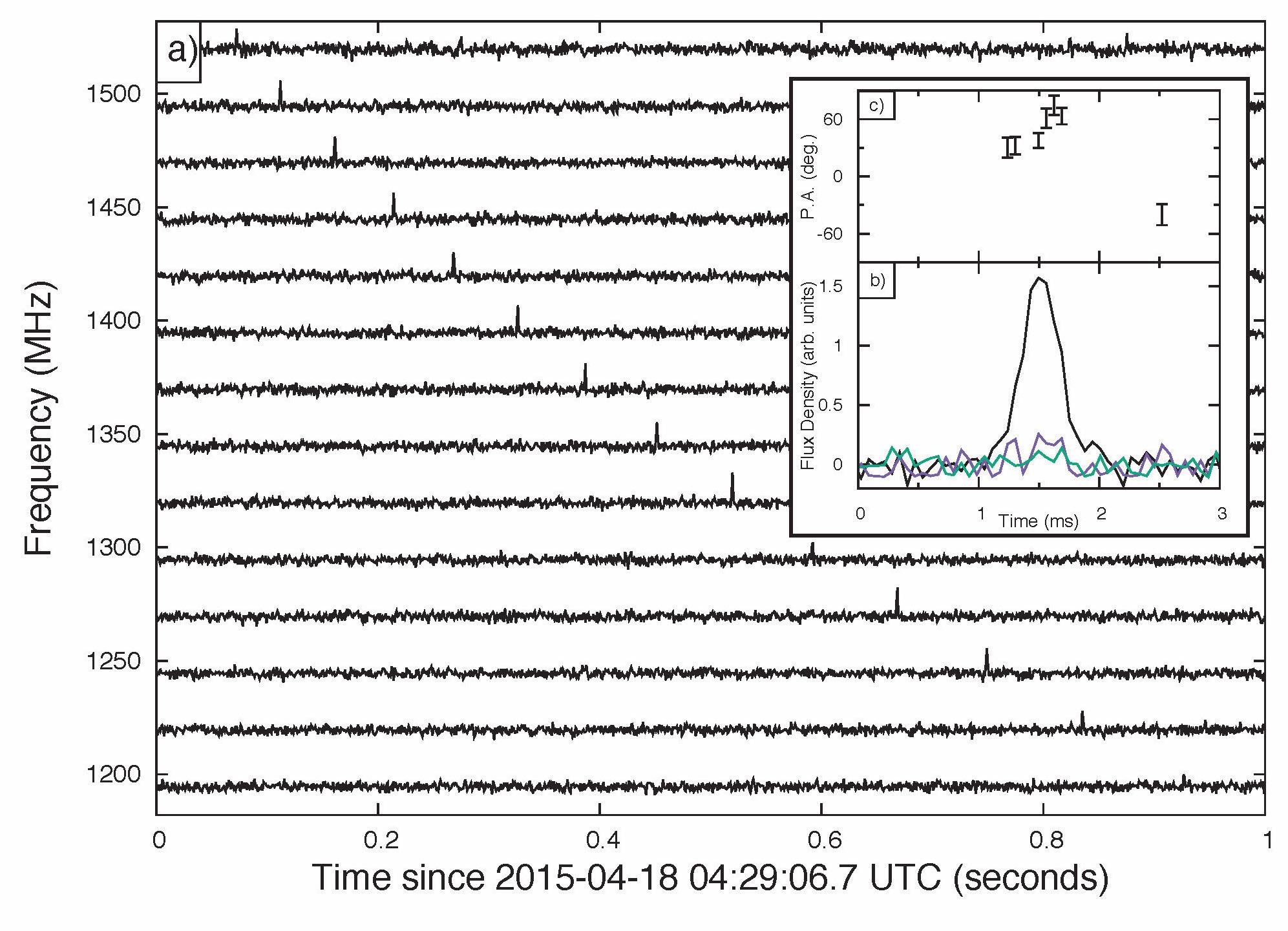 Figure 2: This image shows the increased delay in the arrival time of the Fast Radio Burst as a function of the frequency. The delay in the signal is caused by the material it goes through between its point of origin and Earth. Image Credit: E. F. Keane (SKAO).

The study was published in Nature on February 24, 2016, titled"The host galaxy of a fast radio burst" by Keane et al. This research is supported in part by a Grant-in-Aid for the Scientific Research (No. 15K05018) by the Japan Society for the Promotion of Science.