A group of researchers from Ehime University, Princeton University, and the National Astronomical Observatory of Japan (NAOJ) among others has performed an extensive search for Dust Obscured Galaxies (DOGs) using data obtained from the Subaru Strategic Program with Hyper Suprime-Cam (HSC). HSC is a new wide-field camera mounted at the prime focus of the Subaru Telescope and is an ideal instrument for searching for this rare and important class of galaxy. The research group discovered 48 DOGs, and has measured how common they are. Since DOGs are thought to harbor a rapidly growing black hole in their centers, these results give us clues for understanding the evolution of galaxies and supermassive black holes.
zoom 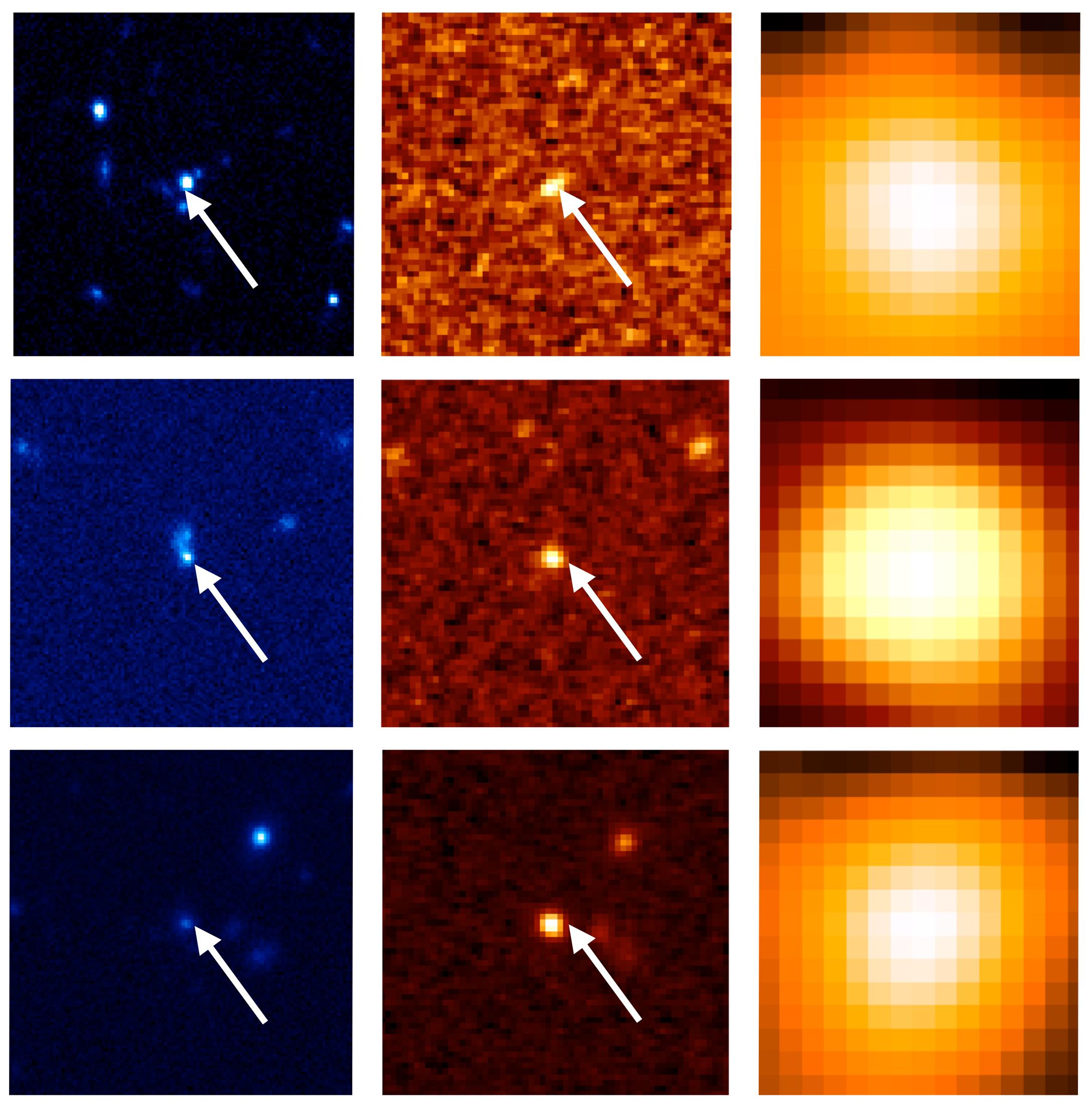 Figure 1: Images of 3 DOG's. The left, middle, and right panels show optical image from HSC, near-infrared image from VIKING, and mid-infrared image from WISE, respectively. The image size is 20 square arcsecond (1 arcsecond is 1/3600 degree). It is clear that DOGs are faint in the optical, but are extremely bright in the infrared. (Credit: Ehime University/NAOJ/NASA/ESO)

How did galaxies form and evolve during the 13.8-billion-year history of the universe? This question has been the subject of intense observational and theoretical investigation. Recent studies have revealed that almost all massive galaxies harbor a supermassive black hole whose mass reaches up to a hundred thousand or even a billion times the mass of the sun, and their masses are tightly correlated with those of their host galaxies. This correlation suggests that supermassive black holes and their host galaxies have evolved together, closely interacting as they grow.

The group of researchers, lead by Dr. Yoshiki Toba (Ehime University), focused on the Dust Obscured Galaxies (DOGs) as a key population to tackle the mystery of the co-evolution of galaxies and black holes. DOGs are very faint in visible light, because of the large quantity of obscuring dust, but are bright in the infrared. The brightest infrared DOGs in particular are expected to harbor the most actively growing black hole. In addition, most DOGs are seen in the epoch when the star formation activity of galaxies reached its peak, 8-10 billion years ago. Thus both DOGs and their black holes are rapidly growing, at an early phase of their co-evolution. However, since DOGs are rare and are hidden behind significant amount of dust, previous visible light surveys have found very few such objects.

A Search for Dust Obscured Galaxies with HSC

Hyper Suprime-Cam (HSC) is a new instrument installed on the 8.2 meter Subaru Telescope in 2012. It is a wide-field camera with a field of view nine times the size of the full moon. An ambitious legacy survey with HSC started in March 2014 as a "Subaru strategic program (Note 1)"; total of 300 nights have been allocated for a five year period. The Subaru strategic program with HSC started to deliver large quantities of excellent imaging data.

The research team selected DOGs from early data from the HSC Subaru Strategic Program (SSP). DOGs are thousand times brighter in the infrared than the optical and the team selected their targets using the HSC and NASA's Wide-field Infrared Survey Explorer (WISE: Note 2). They also utilized the data from the VISTA Kilo-degree Infrared Galaxy survey (VIKING: Note 3). The all-sky survey data with WISE are crucial to discover spatially rare DOG while the VIKING data are useful to identify the DOGs more precisely.

Consequently, 48 DOGs were discovered. Each of these is 10 trillion times more luminous in the infrared than the sun. The number density of these luminous DOGs is about 300 per cubic gigaparsecs. It is theoretically predicted that these DOGs harbor an actively evolving supermassive black hole. This result provides researchers new insights into the mysteries of the co-evolution of galaxies and supermassive black holes from the unique observational prospects. 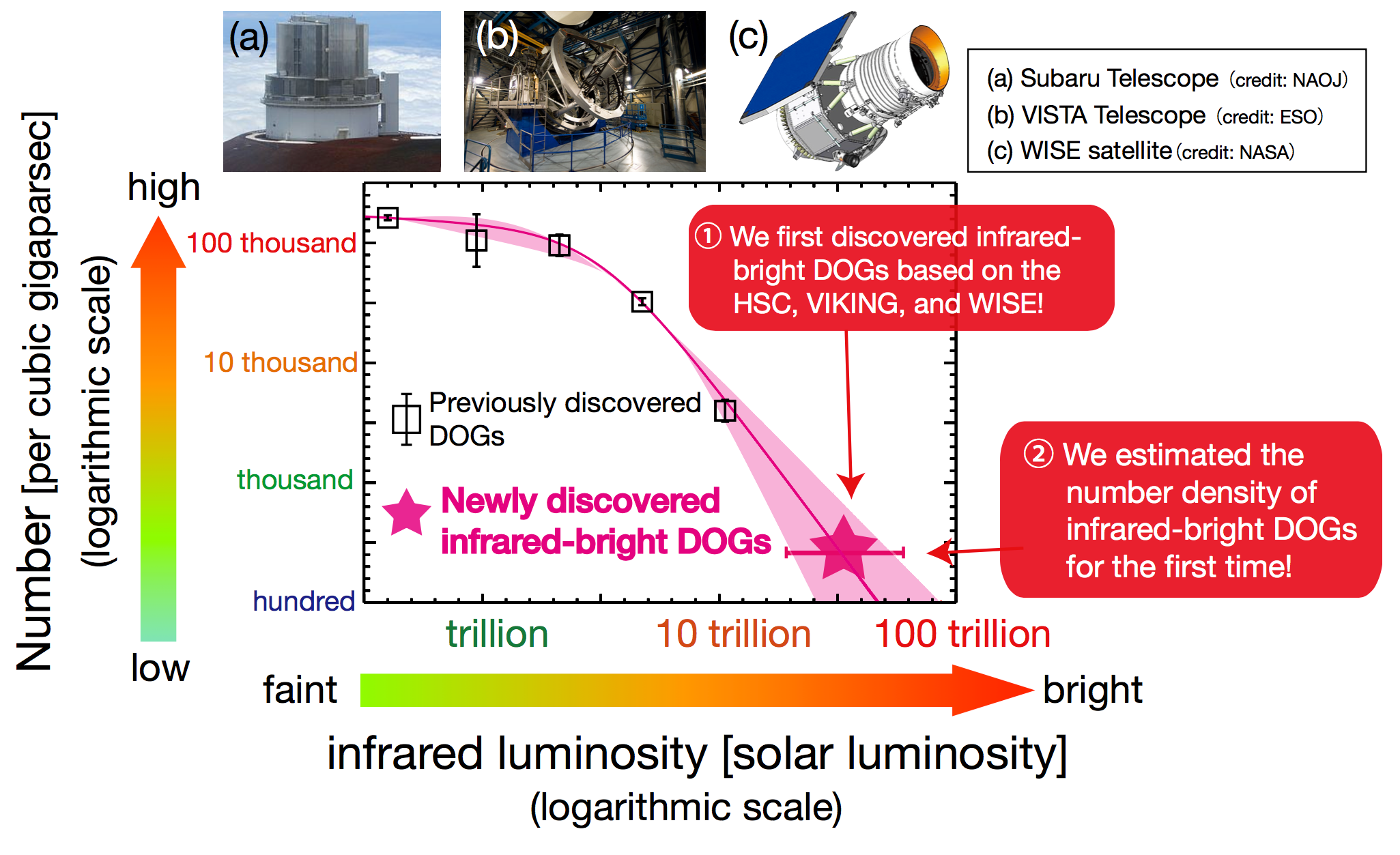 Figure 2: The number density of DOGs that were newly selected in this study, as a function of infrared luminosity. Data represented by the red star is the HSC result. The research team found that (i) their infrared luminosity exceeds 10 trillion suns, and (ii) their number density is about 300 per cubic gigaparsecs (1 gigaparsec is about 3×1025 meter). (Credit: Ehime University/NAOJ/NASA/ESO)

In this research, the research team discovered 48 Dust Obscured Galaxies and revealed their statistical properties of infrared luminous DOGs in particular, for the first time.

The first author of the paper Dr. Yoshiki Toba said, "There are no instruments on large telescopes with the sensitivity and field of view of HSC, and hence HSC is unique in its ability to search for DOGs. The HSC survey will cover more than 100 times as much area of the sky as the area used for this study when it is complete, allowing the identification of thousands of DOGs in the near future. We are planning to investigate the detailed properties of DOGs and their central black holes using observations from many telescope."

Also, Professor Tohru Nagao, second author of the paper, said "The Subaru Strategic Program with HSC has just begun. In the near future, exciting results will be released not only from studies on galaxy evolution, but also from in fields such as solar systems, stars, nearby galaxies, and cosmology."

This research will be published on October 25, 2015 in the Publications of the Astronomical Society of Japan (PASJ) Subaru special issue (Toba et al. 2015, "Hyper-luminous Dust Obscured Galaxies discovered by the Hyper Suprime-Cam on Subaru and WISE", PASJ, Vol. 67, Issue. 5 ). Online version was posted on July 12, 2015. This work was supported from the Japan Society for the Promotion of Science (grant No. 25707010) and from the Yamada Science Foundation.

1.In the Subaru Strategic Program, 300 nights have been allocated for five years in total. The superb resolution and sensitivity of these images enable us to find these rare and faint galaxies, to understand the growth and evolution of galaxies and black holes.