A group of researchers from the Stony Brook University (the State University of New York) and the National Astronomical Observatory of Japan has discovered 854 "ultra dark galaxies" in the Coma Cluster by analyzing archival data from the Subaru Telescope. The discovery of 47 such mysterious dark galaxies was a surprising find in 2014, and the new discovery of more than 800 suggests galaxy clusters as the key environment for the evolution of these mysterious dark galaxies. "Not only these galaxies appear very diffuse," said Jin Koda, principal investigator of the study, "but they are very likely enveloped by something very massive." 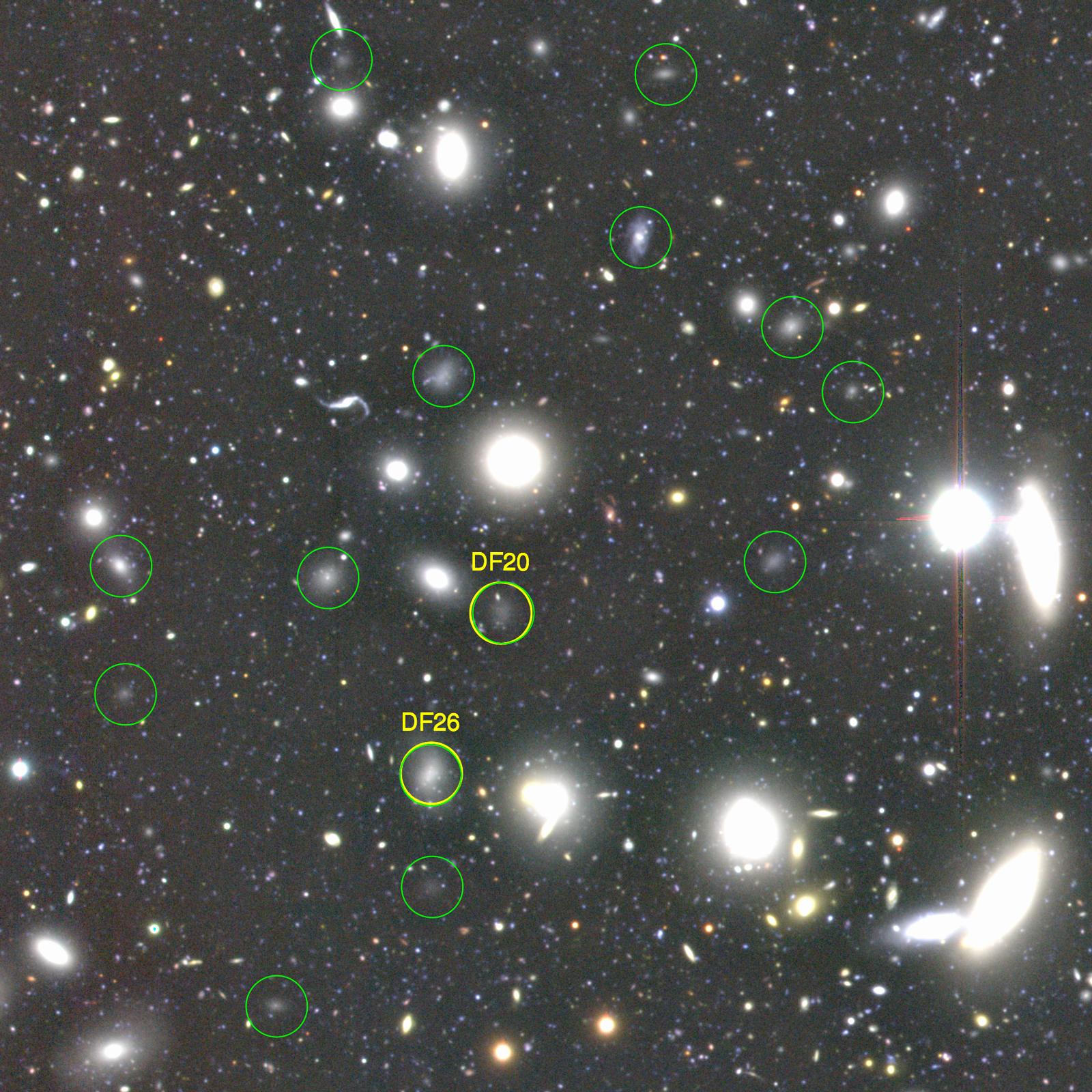 Figure 1: A color image made with B, R, and i-band images from the Subaru Telescope. A small region of 6 x 6 arcmin is cut out from large Coma Cluster images. Yellow circles show two of the 47 dark galaxies discovered last year, and green circles are the ones discovered in this new study. Image without the labels is here, image without the labels and circles is here.(Credit: NAOJ)

These galaxies appear very diffuse and remarkably extended as seen by the light of the stars they contain. Many are similar in size to the Milky Way, but have only 1/1,000 of stars that our galaxy does (Figure 1). The stellar population within such fluffy extended galaxies is subject to rapid disruption due to a strong tidal force detected within the cluster. Something invisible must be protecting the fragile star systems of these galaxies, something with a high mass. That "something" is very likely an excessive amount of dark matter. The component of visible matter, such as stars, is calculated to contribute only 1% or less to the total mass of each galaxy. The rest – dark matter – accounts for more than 99%.

The Subaru Telescope, with its large-aperture and wide-field camera, used under excellent seeing conditions, revealed that these dark galaxies contain old stellar populations and shows a spatial distribution similar to those of other brighter galaxies in the Coma Cluster (Figure 2). That suggests they have been a long-lived population of galaxies within the cluster. The amount of visible matter they contain, less than 1%, is extremely low compared to the average fraction within the universe.

Figure 2: A 2.9 x 2.9 degree field-of-view sky image of the Coma Cluster. (Left) An image from the Digitized Sky Survey (from a digitized photo-plate). Eighteen white squares are the coverage by the Subaru Telescope with the R-band filter. Red and yellow parts were observed in multiple bands with Subaru, which enabled the study of galaxy colors. The light blue region is the area in Figure 1. (Right) The distribution of the newly found dark galaxies. Blue circles indicate the ones of particularly large sizes (roughly the size of the Milky Way galaxy even though the total light is only 1/1,000 of the Milky Way). (Credit: NAOJ/Stony Brook University)

Why are these galaxies dark? Somehow, they lost gas needed to create new stars during or after their largely unknown formation process billions of years ago. From their preferential presence within the cluster, it’s likely that the cluster environment played a key role in the loss of gas, which affects star formation within the galaxy. Several loss mechanisms are possible, including ram-pressure stripping by intra-cluster gas, gravitational interactions with other galaxies within the cluster, and gas outflows due to simultaneous supernova explosions triggered, e.g., by the ram pressure or gravitational encounters.

In addition to research into galaxies’ stellar populations, further investigation of the large dark matter component of the galaxies is essential. Dark matter is invisible, but measurements of stellar motions may expose the distribution of dark matter in these galaxies. Such a dream measurement may not be immediately possible, because they are so faint. It is difficult to measure the detailed motions of stars, even with the Subaru Telescope. The construction of Thirty Meter Telescope (TMT) by an international partnership of institutions, including the National Astronomical Observatory of Japan may well reveal the mystery of the dark galaxies in near future.

The National Astronomical Observatory of Japan has maintained all the data obtained with the Subaru Telescope since its very first light observations 16 years ago (in 1999). All archive data are made available to the community one and half years from the night of the observation. This new discovery is made possible thanks to the availability of abundant archival Subaru data. Re-analyses of archival data have often resulted in new discoveries and publications. The Subaru data archive continuously offers "treasure hunting" opportunities.

This discovery will be published on June 24, 2015 in the Astrophysical Journal Letters by the American Astronomical Society (Koda et al. 2015, "Approximately A Thousand Ultra Diffuse Galaxies in the Coma cluster"). The preprint is available here.