Discovery of an Extremely Young Stellar Clump in the Distant Universe

The following release was received from the Institute of Research into the
Fundamental Laws of the Universe, CEA (French Alternative Energies and Atomic Energy Commission) and is reprinted here in its entirety for the convenience of our readers (original article).

A key for unsderstanding galaxy evolution

As part of an observing program carried out with the Subaru Telescope and the Hubble Space Telescope, a group of researchers from the "Service d'Astrophysique-Laboratoire AIM" of CEA-IRFU led by Anita Zanella discovered the birth cry of a massive star-forming clump in the disk of a very distant galaxy. This giant clump is less than 10 million years old, and it is the very first time that such a young star-forming region is observed in the distant Universe. This discovery sheds new light on how stars were born within distant galaxies. The physical properties of this object reveal that newly-born clumps in such galaxies survive from stellar winds and supernovae feedback, and can thus live for a few hundred million years unlike the predictions from several theoretical models. Their long lifetime could enable their migration toward the inner regions of the galaxy, hence contributing to the total mass of the galactic bulge and the growth of the central black hole. These results are published in the "Nature" journal from May 2015.

When the Universe was only 3 billion years old, galaxies had very different properties than those they exhibit nowadays. Their shapes were more irregular and their disks were much more gas-rich. We actually know that the latter formed their stars more rapidly, within gigantic, much more massive and luminous star-forming regions than those typically observed in local galaxies. However, the way these large stellar clumps formed is not yet understood, and their evolution along cosmic history is still highly debated. To clarify these open issues, astrophysicists from SAp carried out their own observing campaign with the Hubble Space Telescope (in imaging and spectroscopic mode) and the Subaru telescope (in spectroscopic mode) installed in Hawaii. Indeed, the apparent faintness of distant galaxies requires the use of powerful observing facilities. They discovered the signature of a giant clump made of very young stars and caught while just forming, within a galaxy located at a distance of 11 billion light-years (Figure 1).

Less than 10 Million years old, this clump has not yet evolved enough for its stars to be directly detected. Therefore it is thanks to the radiations from the gas ionized by these young stars that it was revealed. This giant clump has a gas mass of about one billion times that of the Sun. Forming its stars at a rate of 30 solar masses per year, it contributes up to 50% of the total star formation of the galaxy. Besides, its growth rate in mass and its efficiency in converting molecular gas into new stars are 10 times higher than the typical values observed at this epoch of cosmic history. This confirms the presence of a prodigious burst of star formation in this region. 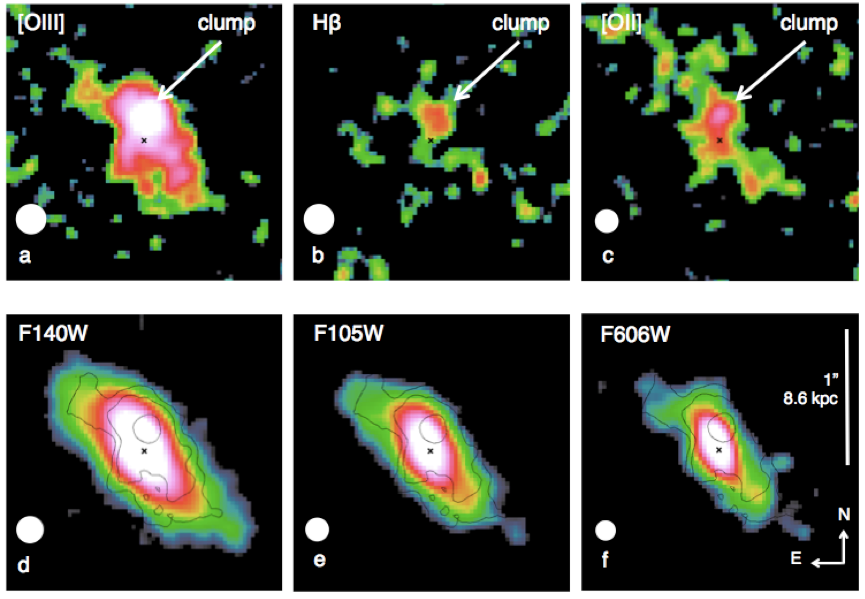 Figure 1: Discovery of a giant star-forming clump less than 10 million years old in a galaxy of the distant Universe. Observations were obtained using the WFC3 wide field camera on-board the Hubble Space Telescope and depict the ionized gas emission through the Oxygen ([OIII] and [OII], panels a and c) and Hydrogen (Hbeta, panel b) lines, as well as the stellar continuum of the galaxy at 1.4, 1.05 and 0.6 microns (panels d, e and f). The clump of star formation (indicated by the white arrow) is particularly luminous in the [OIII] line, whereas its signature is still unseen in the continuum images. This galaxy has a cosmological redshift z=2, corresponding to a look-back time of more than 11 billion years. The black cross shows the position of the stellar mass barycenter of the galaxy. The spatial resolution of each of these images is illustrated by a white filled circle. The white vertical bar (1") represents a length of 28000 light-years at the distance of the galaxy (Credits CEA/HST).

To supplement the interpretation of these unprecedented results, the scientists also developed a set of hydro-dynamical simulations at very high resolution using the super computer of the « Très Grand Centre de Calcul » of CEA and GENCI. These simulations show that in gas-rich galaxies, gravitational instabilities and turbulence within the interstellar medium lead the gas to fragment and collapse, which then results in the birth of a host of new stars, concentrated in regions which size can reach several hundred light-years (Figure 2). Within these stellar clumps, the instantaneous star-forming activity undergoes dramatic increase during the very first few million years, to reach values remarkably close to that inferred from the observations obtained by Zanella and her team. The star forming efficiency in these regions is also larger than the typical value measured at galaxy scales. Then, after about 15 million years, the feedback and stellar winds from the young massive stars and the explosion of the first supernovae become strong enough to counterbalance the gravitational collapse of the gas. Star formation hence gradually declines, while still maintaining an efficiency higher than that characterizing the other disk regions.

Figure 2: Hydro-dynamical simulation of a galaxy in the distant Universe. The two images, which result from this numerical simulation, represent snapshots captured 10 million years after the birth of the « A » star- forming region visible in the top-left corner of the galaxy. They show the spatial distributions of the already-formed stellar mass budget (left) and the instantaneous activity of star formation in the disk (center). The diagram on the right represents the evolution of the star formation rate and stellar mass growth in region « A » as a function of time (solid and dashed black curves, respectively), as well as the same quantities averaged over all star-forming regions of the galaxy (red curves). At 10 million years, the "A" region reaches its peak of star-forming activity and contributes substantially to the overall activity in the disk (central panel). Yet, it has not formed enough stars to be easily seen in the stellar mass map (left panel). (Credits CEA, projet COAST )

A possible mechanism to explain the growth of galaxy bulges

The discovery of such a young star-forming region in a distant galaxy has crucial implications on the understanding of galaxy formation at cosmological scale. The young and massive clump discovered by the researchers of CEA reveals indeed rare physical properties, only observable during the ~15 million years following the gravitational collapse of the gas and the birth of such concentrations of new stars. Among the ~60 galaxies observed as part of this study, it is actually the only object showing such characteristics. Giant clumps found in the other distant galaxies correspond indeed to much more evolved stellar regions. Hence, the scarcity of the phenomenon discovered here implies that the lifetime of the clumps observed in the distant Universe could reach at least 500 million years. This new constraint excludes theoretical scenarios that predict their rapid destruction by the feedback and the action of the winds originating from newly-formed stars, and it corroborates the idea that these giant clumps can survive long enough to evolve within the galactic disk where they were born. They could then migrate toward the core of the galaxy and play a major role in the growth of the bulge and the central super-massive black hole.

Properly characterizing the role of these giant clumps in galaxy evolution will yet require an even more accurate determination of their physical properties, such as their size and dynamical mass. Increasing the statistical sample of such young star-forming regions will also be a central part of the forthcoming work led by the research group. Such studies will require in particular the use of observing facilities like the ALMA (Atacama Large Millimeter Array) network of radio antennae installed in northern Chile, as well as the James Webb Space Telescope (JWST) whose launch is planned for the end of 2018.