Ongoing studies of distant galaxy protoclusters using the Multi-Object Infrared Camera and Spectrograph (MOIRCS) instrument on the Subaru Telescope is giving astronomers a closer look at the characteristics of star-forming regions in galaxies in the early universe. A team of astronomers from the National Astronomical Observatory of Japan (NAOJ) and SOKENDAI (Graduate University of Advanced Studies, Japan) are tracking velocity structures and gaseous metallicities in galaxies in two protoclusters located in the direction of the constellation Serpens. These appear around the radio galaxies PKS 1138-262 (at a redshift of 2.2, Figure 1) and USS 1558-003 (at a redshift of 2.5). The clusters appear as they would have looked 11 billion years ago, and the team concluded that they are in the process of cluster formation that has led to present-day galaxy clusters. 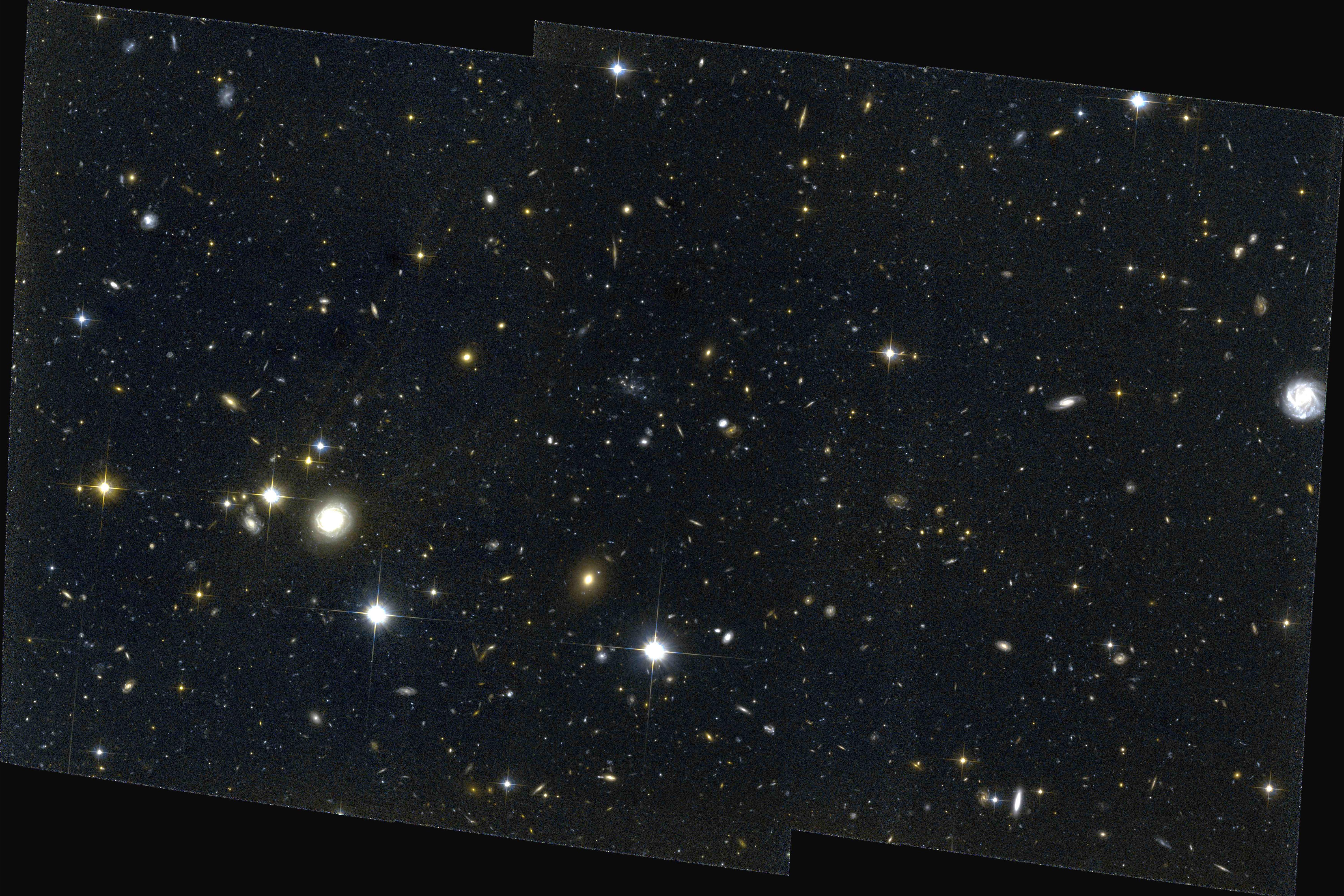 The MOIRCS near-infrared spectrograph is very effective for studies focused on the distant, early universe because strong emission lines from star-forming galaxies are redshifted from the optical to the near-infrared regime. This gives astronomers unique insights into these activities. (Note 1)

Based on the MOIRCS data, the team estimated that both protoclusters have a weight of about 10^14 solar masses (Figure 2). These follow the typical mass growth history of the today's most massive clusters, such as the 'Coma Cluster.' That makes the two protoclusters ideal laboratories for exploring early phasesof galaxy formation in a unique clustered environment. 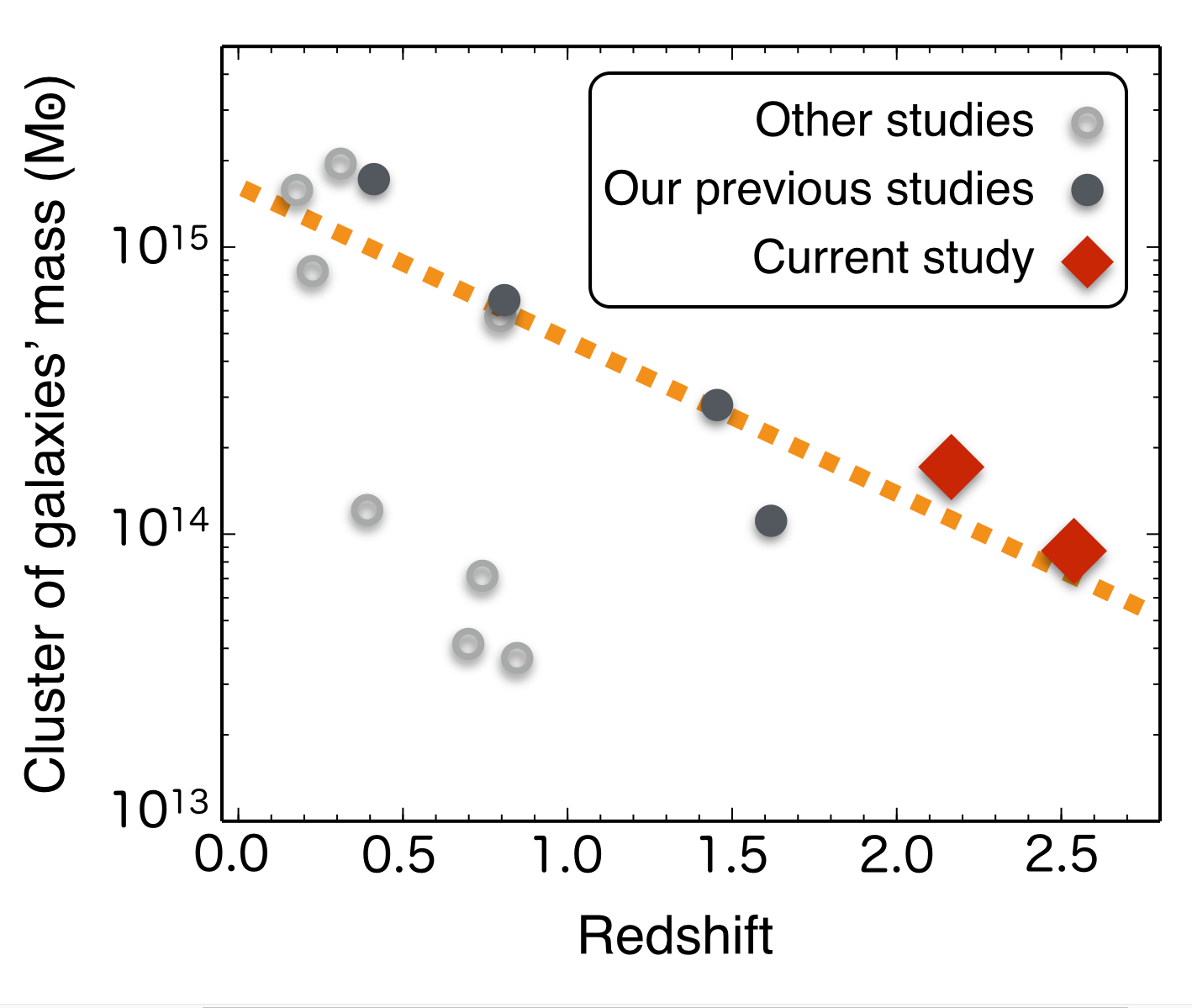 The metallicity of the gases in the protocluster galaxies was studied using multiple spectral lines emitted from them. The result shows their gaseous metallicities are chemically enriched compared with those of galaxies in the general fields (Figure 3). Metals (elements heavier than hydrogen and helium) are created in the interiors of stars as they evolve and then released into surrounding gas through supernova explosions or stellar winds (often referred to as chemical evolution; Figure 4a). 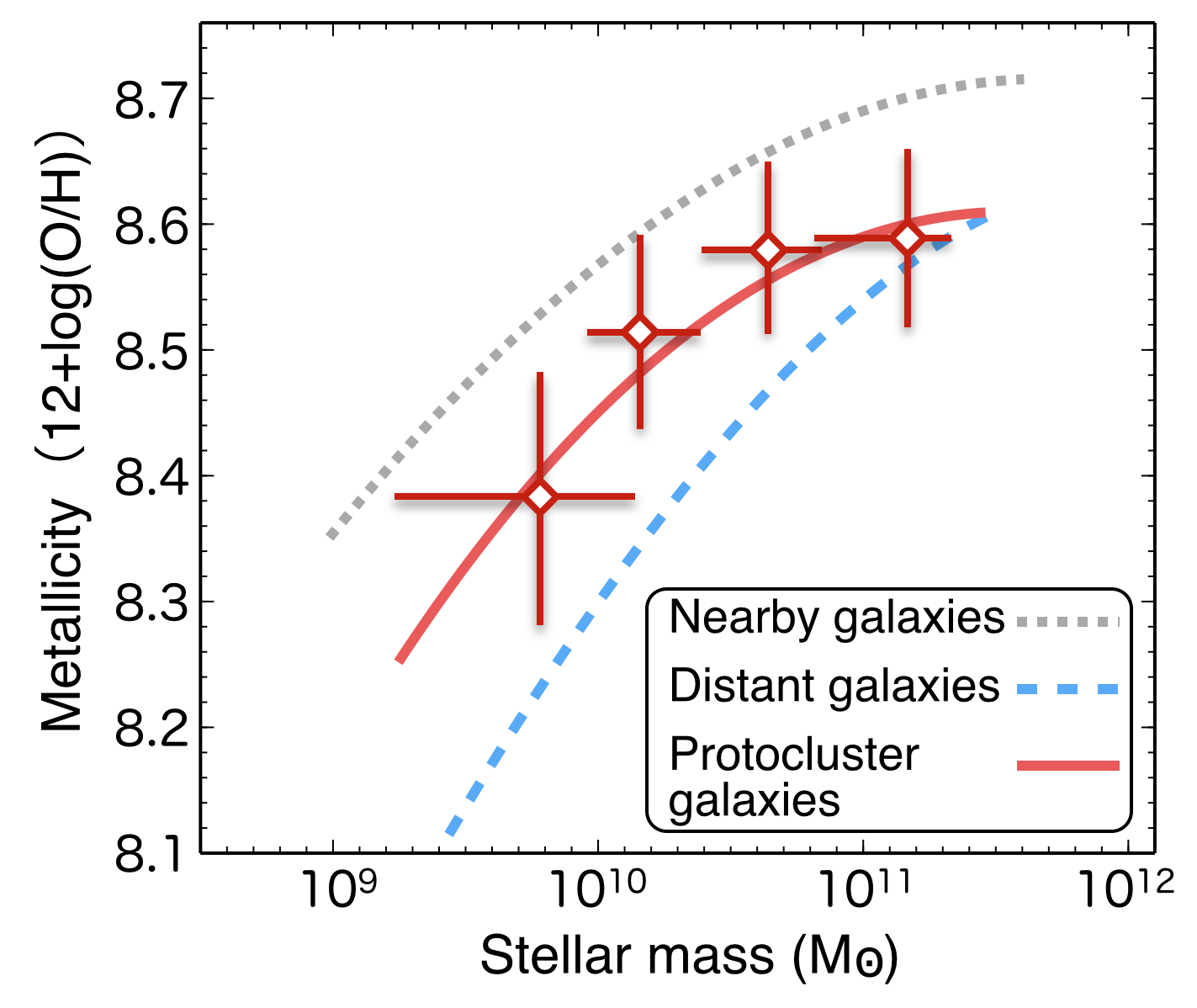 Figure 3: Plot of stellar mass of the galaxies versus metallicity of gas in them. Gray and pale blue curves are for the present-day (nearby) galaxies and field galaxies at 11 billion years ago, respectively. Red is the current study about the proto-cluster of galaxies. The galaxies in the proto-clusters clearly show higher metallicity compared with the ones in the general fields at about the same time of the history in the universe. (Credit: NAOJ)

The difference in gaseous metallicity between protoclusters and general fields suggests that star-formation histories and/or gas inflow/outflow processes should be different in the protocluster regions. The result also suggests that galaxy formation has already been influenced by environmental conditions in the era that star-formation activities are the most active across the universe. This would be an early phase of strong environmental effects seen in the present galaxy clusters.

In order to explain the metallicity excess in the protoclusters, the team members focused attention on the environmental effects of inflow and outflow mechanism on the galaxy formation process. Recent works report that inflow and outflow activities were most significant eleven billion years ago (at redshift ~2), and were about a hundred times more active relative to those in the local universe.

Clusters of galaxies are large self-gravitating systems in which galaxies and ionized gas are bound by massive amounts of dark matter. In such unique, dense environments, galaxies move at a speed of about 1000 kilometers per second. Due to this high speed, the galaxies are exposed to high pressure from intercluster medium. As a result, the outer regions with relatively poor metallicity are stripped. It is like the strong air resistance of air a bicycle rider experiences. In this case, the gaseous metallicities become higher because the chemical enrichment process takes place mainly in metal-rich central regions (Figure 4b). Another possibility is that the surrounding high-pressure, inter-cluster medium prevents outflowing gas from escaping from the galaxies (Figure 4c). This also results in higher gaseous metallicities of the cluster galaxies.

Figure 4: Illustrations of the metal enrichment processes (chemical evolution) in the field galaxies and the proto-cluster galaxies. Left (figure 4a) is for the galaxies in the general fields while the middle and the right (figures 4b and 4c, respectively) show their model that explain the unique enrichment processes of the heavy elements in the galaxies in the proto-clusters. (Credit: NAOJ)

The research team concludes that the metallicity excess in the protocluster regions results from unique phenomena occurring in the cluster environment. The PI of this research, Mr. Rhythm Shimakawa of NAOJ and SOKENDAI (Note 2), is determined to continue studying the detailed physical properties of individual forming galaxies in the protoclusters to find clear evidence that proves this hypothesis.

This article is based on results from two research papers published in the Monthly Notices of the Royal Astronomical Society:

This research is supported in part by a Grant-in-Aid for the Scientific Research (Nos. 21340045 and 24244015) by the Japanese Ministry of Education, Culture, Sports, Science and Technology.

2.Mr. Rhythm Shimakawa received the first "SOKENDAI Future Scientist Award" for his research "Environmental effects on galaxy formation: When and how did spiral and elliptical galaxies diverge?", which includes the two papers referred in this article.