Images from a December 2013 observation of the comet C/2013 R1 (Lovejoy) (Note 1) reveal clear details about rapidly changing activity in that comet's plasma tail. To get this image, astronomers used Subaru Telescope's wide-field prime-focus Suprime-Cam to zero in on 0.8 million kilometers of the comet's plasma tail, which resulted in gaining precious knowledge regarding the extreme activity in that tail as the comet neared the Sun. Their results are reported this week in a paper in the March 2015 edition of the Astronomical Journal.

Team of researchers from National Astronomical Observatory of Japan, Stony Brook University (The State University of New York) and Tsuru University reported highly resolved find details of this comet captured in B-band in 2013 (Subaru Telescope's Image Captures the Intricacy of Comet Lovejoy's Tail). They used I-band filter which includes H2O+ line emissions and the V-band filter which includes CO+ and H2O+ line emissions. During the observations, the comet exhibited very rapid changes in its tail in the course of only 20 minutes (Figure 1). Such extreme short-term changes are the result of the comet's interactions with the solar wind, which consists of charged particles constantly sweeping out from the Sun. The reason for the rapidity of these changes is not well understood.

Dr. Jin Koda, the principal investigator of these nights, says "My research is on galaxies and cosmology, so I rarely observe comets. But Lovejoy was up in the sky after my targets were gone on our observing nights, and we started taking images for educational and outreach purposes. The single image from the previous night revealed such delicate details along the tail it inspired us further to take a series of images on the following night. As we analyzed the images, we realized that the tail was displaying rapid motion in a matter of only a few minutes! It was just incredible!"

A good candidate for a detailed study of activity in the plasma tail must be a bright comet with an orbit that takes it close enough to the Sun to form such a tail. In addition, the best viewing angles for astronomers to capture views of plasma tail changes occur when the comet also approaches close to Earth. As a result, comets that allow good viewing of the plasma tail are relatively rare - about one or two per year. During its passage, Comet Lovejoy's plasma tail was almost perpendicular (83.5 degrees) to the line of sight from Earth. That made it a prime candidate for close-up observations of its plasma tail structure using Suprime-Cam.

Figure 1：This GIF animation shows changes in the global structure of Comet Lovejoy's (C/2013 R1) plasma tail. There are three, 2-minute exposures taken in the I-band. The image is aligned so that the nucleus of the comet is at the same position and the tail lies vertically. The time stamp at the bottom right shows the start time of each exposure in Hawai'i time on the morning of December 4, 2013. Bright parts of the sky are shown as black, and dark parts are shown as white, allowing astronomers to see details in the object more clearly. The white tilted grid is a gap between CCD detectors. In the image, the tail narrows with time, especially downstream of the nucleus (which is at the bottom of the image). Moreover, two clumps were detected forming formed at about 0.3 million kilometers from the nucleus. They drifted toward downstream about 20 - 25 kilometers per second (Figure 2). (Credit: NAOJ) 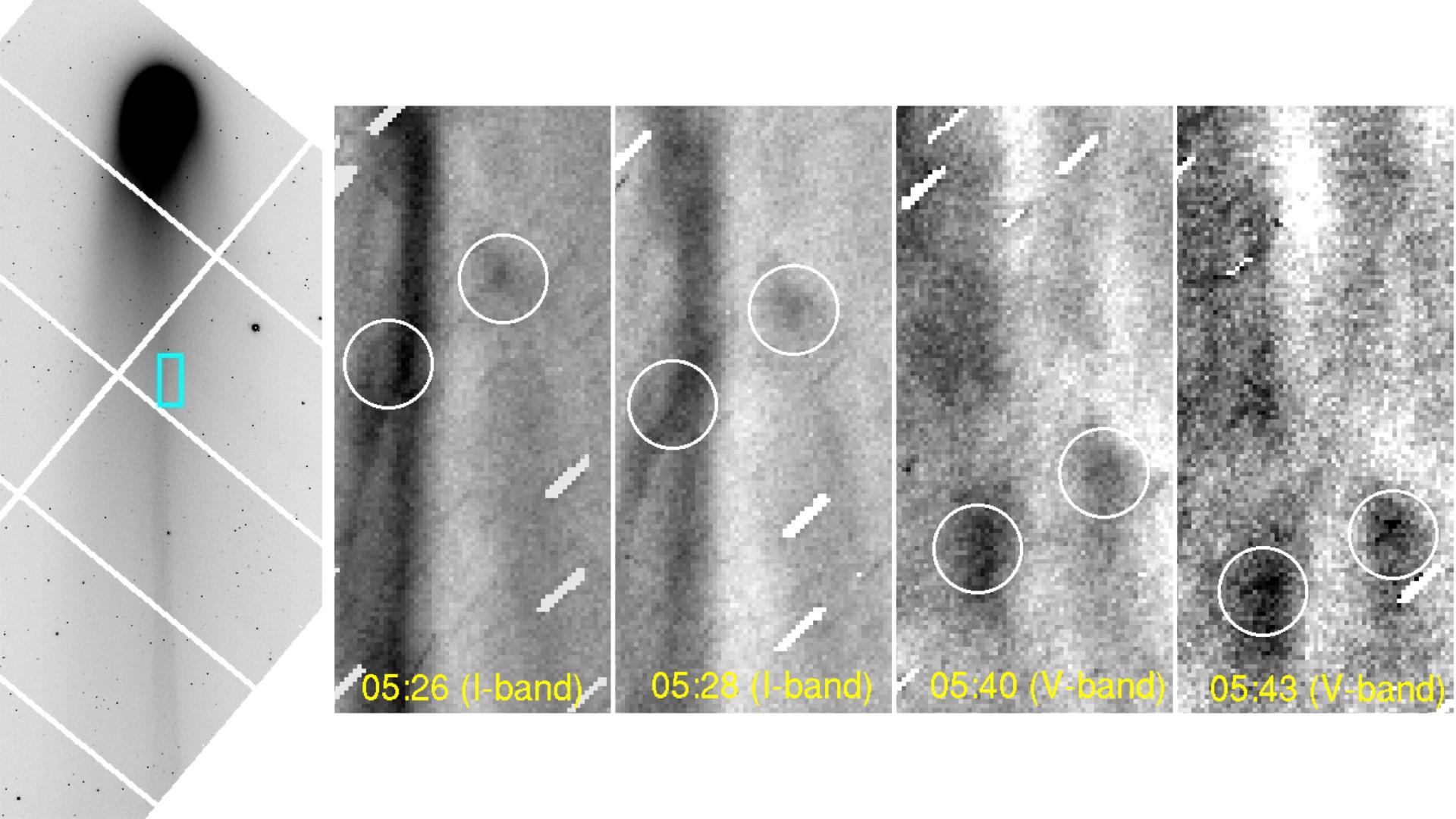 Figure 2: (left): A 2-second I-band exposure of the comet. The cyan rectangle shows the region in the right panel. (right): This shows movement of two clumps in the plasma tail. Images produced from 2-minute exposures are further processed; background star trails are masked, and unsharp-masked to enhance detailed structures. The masked star trails are seen as short tilted white lines. Time stamps in yellow show the start time of the exposure. White circles indicate the clumps detected in this study. They move away from the nucleus over time. The size of the cutout is about 2500 x 5600 kilometers. From the data, the research team calculated the speed of the clumps at 20 - 25 kilometers per second. (Credit: NAOJ)

It is still under study how these ion clumps form and what parameters determine the initial speed of them. Dr. Masafumi Yagi, the first author of the paper noted "Comets are often observable only during the twilight as they come near the Sun. On the other hand, it becomes difficult to observe faint objects like galaxies during the twilight hours because of the brighter sky background. Well-designed telescope scheduling like this case makes an effective use of the Subaru Telescope's time and will enable us to collect more data of comets when the opportunity arises in the future."

The team's research paper titled “Initial Speed of Knots in the Plasma Tail of C/2013 R1 (Lovejoy) will be published in Astronomical Journal in its March 2015 issue.

1.Comets are generally referred to by designations according to the order of discovery while IAU adopted a guideline that comets are named for the family name of their individual discoverer(s) (guideline by IAU).
There are several bright "comet Lovejoy", which were discovered by Mr. Terry Lovejoy. For example, C/2014 Q2 (Lovejoy), which is still bright at the time of this press release (March 2015) (Jan 16, 2015 Comet Lovejoy Photographed at ALMA OSF, and C/2011 W3 (Lovejoy), which approached the Sun in 2012
Jan 05, 2012 Comet Lovejoy and Southern Cross are different from C/2013 R1 (Lovejoy) in this study.