The following release was received from Shinshu University and is reprinted here in its entirety for the convenience of our readers:

A team of astronomers (Note 1) have observed a distant (Note 2) gravitationally-lensed quasar (i.e., an Active Galactic Nucleus; Note 3) with the Subaru Telescope and concluded that the data indeed present a 3-D view of the structure around a quasar. Although the team had earlier suggested this as a possibility (Note 4), the final conclusion was drawn only through additional observations.

Quasars are bright central regions present in some distant galaxies, and their luminosities are often hundreds of times greater than those of their host galaxies. It is known that a large amount of gas streams called "outflows" move outward from the central region of quasars. The outflows are eventually distributed to large distances and have a substantial influence on surrounding interstellar/intergalactic regions and on the evolution of galaxies. Although we cannot see outflows directly because of their faintness, we detect them through absorption features that are recorded in the spectra of the bright sources of light behind them (Note 5). However, the weakness of this technique is that it traces outflows only along single sight-lines (i.e., one dimension) toward each quasar. Thus, their internal structures are not easy to investigate.

The team used the Subaru Telescope to observe SDSS J1029+2623, a quasar at ~10 billion light years distance from Earth (from now on referred to as "J 1029"). Due to the gravitational lensing effect (Note 6) by a cluster of galaxies (Note 7) which is located between J 1029 and Earth at a distance of ~5 billion light years, there is significant distortion in the light path from the quasar, which splits the incoming light into three images: A, B, and C (Figure 1). The maximum separation angle, ~22".5 (Note 8), between images A and B is currently a record. The team hypothesized that each lensed image contains information on the outflow from the quasar when viewed from different angles, thus providing a "3-D" view.

As a result of their observation in February 2010, the team discovered a clear difference in absorption profiles between the images A and B (Figure 2, Left). This result supports the idea that the sight lines are going through different areas of the outflow toward different directions. It is surprising that the absorption profiles arising in the outflow show clear difference between them, despite the small separation angle of ~22".5. The outflow could have a complex internal structure with a number of clumpy gas clouds like cirrocumulus clouds in Earth's atmosphere.

Is difference due to "multiple sightline" or "time variation"?

There is another explanation for the difference between the images A and B. Because the path lengths of lights from the images are different (Figure 3), they have a substantial time delay before reaching Earth. If the internal structure of the outflow varies with time, the two images deliver information about different epochs even if they pass through the same region of the outflow. In this case, the difference between the images is not due to "multiple sightline" but "time-variation".

"Which idea is correct?" To answer this question, additional observations are required. It is already known that the light of the image A reaches Earth about 744 days earlier than the image B does (Figure 3, Note 9). Therefore, a follow-up observation should be performed more than 744 days after the previous observation in February 2010. If the absorption profiles change significantly in both of the images, this would support "time-variation" scenario. On the other hand, if absorption profiles are stable since the previous observation for more than 744 days, we can conclude that the difference between the images A and B are indeed due to the "multiple sightline" scenario.

Further inspection by additional observations (an observation in 2014)

The current team carried out new observations with the Subaru Telescope in April 2014, 1514 days after the previous observation. The absorption profiles in the images A and B did not show any significant changes between the observations (Figure 4) and the difference between the images still remains present (Figure 2, Right). This result is against the "time-variation" scenario. Thus, the team was finally able to conclude that i) we are indeed observing the quasar outflow toward different sightlines, and ii) there exists complex internal structure in the outflow.

The team members also note that the absorption profiles of the images A and B are generally similar to each other, with only exception being that absorption in the image A is deeper than that in the image B at outflow velocities of ~0 – 200 km/s.

These results support a model in which clumpy gas clouds are located in the outflow, some only along the sightline to the image A, while most clouds are visible along both sightlines (Figure 5). These observations are the first time that a detailed internal structure of quasar outflows has been examined.

Another remarkable result is that the absorption depth (especially in Carbon) became slightly shallower in both the images (Figure 4). Such a variation would be a clue that the absorption profiles arise not in foreground galaxies and/or inter-galactic medium but indeed in the quasar outflow itself. If this time-variation is due to "recombination (Note 10)", we can place two constraints: i) the volume density of the outflowing gas must be greater than ten thousands per cubic centimeter (Note 11), and ii) the absorber's distance from the flux source is smaller than 2,000 light years.

We cannot estimate a typical size of gas clouds in the outflow from the current results alone. However, the clear difference that the team observed across even a very small separation angle (~22.5") requires that a typical absorber's size should be smaller than its distance from the flux source by more than four orders of magnitude (Note 12). If "recombination" is the source of time variation, an upper limit of the cloud's size would be about 0.2 light years.

Recently, it has been claimed that a typical cloud's size is about 1/1,000 – 1/10,000 of one light year (Note 13). If they really have such small size, it could be possible to detect sightline differences toward other lensed quasars with smaller separation angles.

The team is planning to extend this observation to other quasar images that are gravitationally lensed by a single massive galaxy (not by a cluster of galaxies like J 1029). More than 100 quasars like that have been discovered so far (Note 14). The lensed images of those quasars have smaller separation angles than the images of J 1029 by one order of magnitude. Therefore, they will be able to place more stringent constraints on the cloud sizes if they find sightline differences in these quasar images also.

Taking advantage of this large sample of lensed quasars, it will also be possible to examine correlations between the cloud sizes and other parameters such as quasar's luminosity and ejection velocity of the outflow. The team hopes these result will lead to a comprehensive understanding of the mysterious phenomena of quasar outflow.


The research paper on which this release is based was published on-line in the October 1, 2014 edition of The Astrophysical Journal Letters: T. Misawa et al., "Resolving the Clumpy Structure of the Outflow Winds in the Gravitationally Lensed Quasar SDSS J1029+2623”, vol. 794, article id. 20 (2014). This research was supported by the JGC-S Scholarship Foundation and partially supported by the Japan Society for the Promotion of Science through a Grant-in-Aid for Scientific Research 26800093.

3.Because their appearance is star-like, they are called "quasi-stellar objects" and abbreviated as quasars.

5.We can examine the physical properties of outflows through absorption features that are recorded in spectra (rainbows) of quasars.

6.The light from a distant source is bent by the gravitational field around massive objects between the source and the observer. As a result, the light is split into multiple images and/or magnified. This effect is one of the predictions of Einstein's general theory of relativity.

7.This is a massive structure consisting of several hundreds to thousands of galaxies, intra-cluster gas, and a large amount of dark matter. A cluster of galaxies can cause a strong gravitationally lensing effect.

9.This can be measured by monitoring and comparing variation patterns of image brightness. (Fohlmeister, J. et al., 2013, The Astrophysical Journal, vol. 764, 186).

10.This is a phenomenon in which electrons are captured by cations in plasma. Recombination rate depends on the electron density, and the relative abundance of specific ions depends on the distance from the flux source.

11.The volume density of air particles on the ground is of order of 1019 per cubic centimeter.

12.Size of gas clouds d, its distance from the flux source r, and separation angle between the lensed images θ, should satisfy the relation d ＜ rθ, in order that two lensed images have different absorption profiles.

13.Gas volume density can be estimated through examination of the ionization conditions of the outflow (for example, Hamann et al. 2013, MNRAS, 435, 133).

14.A substantial fraction of these have been discovered by an international team led by Naohisa Inada and Masamune Oguri (both are members of the current research team). 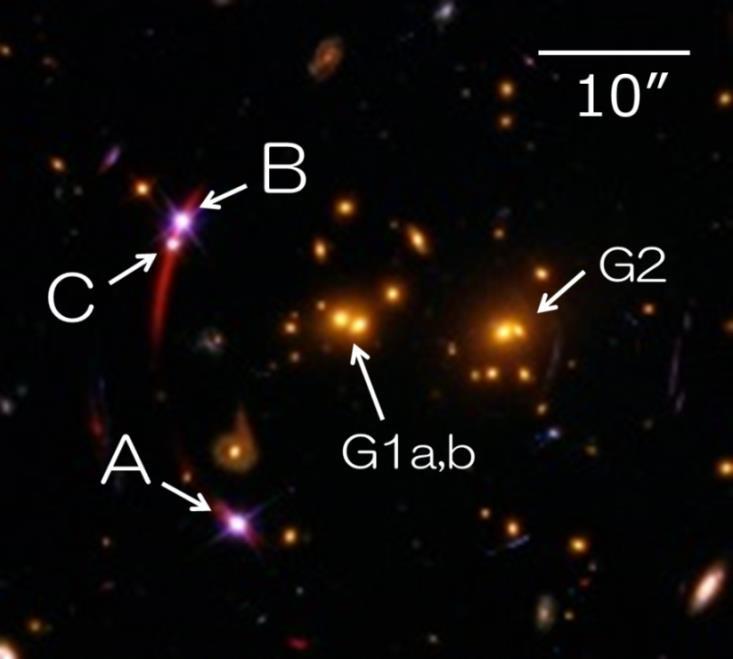 Figure 1: Color image of the region around SDSS J1029+2623, taken with Hubble Space Telescope. Quasar images (marked with A, B, and C) are gravitationally lensed by a foreground cluster of galaxies. Three galaxies of the lensing cluster (marked as G1a, b and G2) are also marked. (Credit: Shinshu University, the National Astronomical Observatory of Japan, and Kavli Institute for the Physics and Mathematics of the Universe) 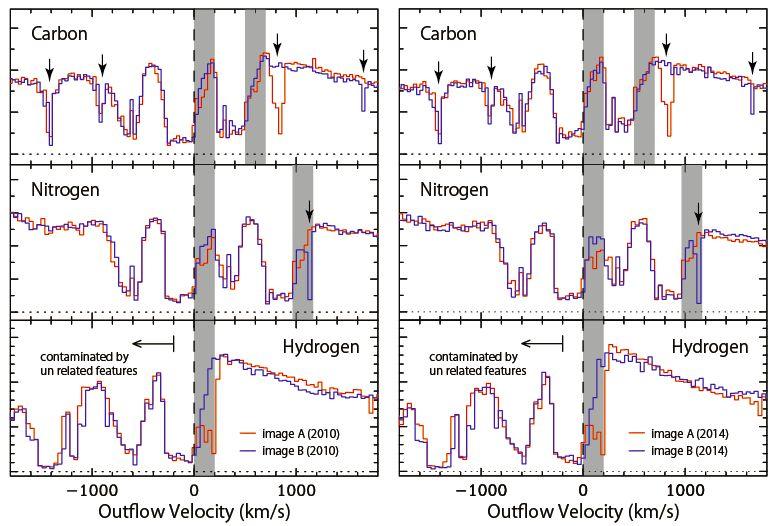 Figure 2: Comparison of absorption features seen in the spectra of the lensed images A (red line) and B (blue line), taken in 2010 February (left) and 2014 April (right). Absorption profiles of three elements (carbon, nitrogen, and hydrogen) are shown from top to bottom. The horizontal axis represents an outflow velocity from the light source, defined as negative if it heads towards Earth. The shaded area shows a clear difference between the images A and B. Arrows highlight features that are not related to the outflow. (Credit: Shinshu University). 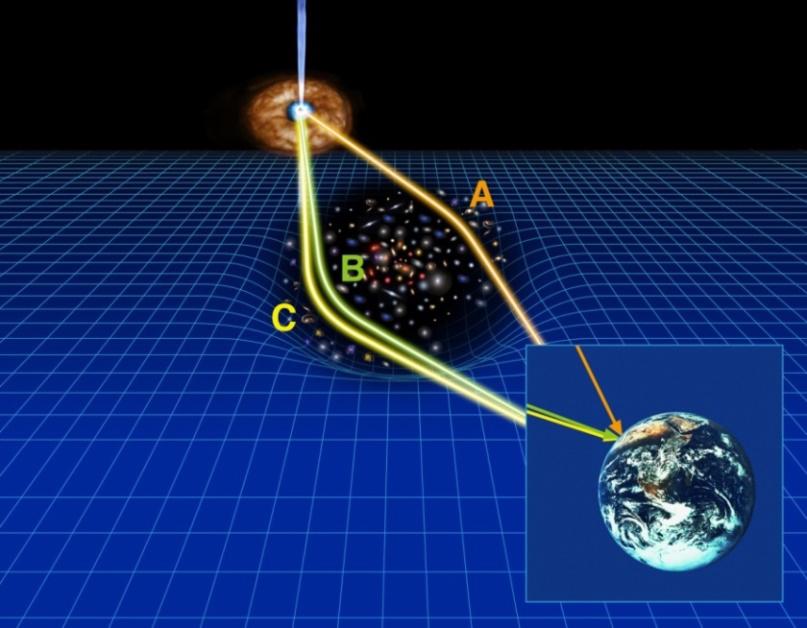 Figure 3: Schematic drawing of the gravitational lensing effect, showing SDSS J1029+2623 (at ~10 billion light years), an intervening cluster of galaxies (at ~5 billion light years), and Earth. The light from quasar reaches Earth through three different routes. Images B and C need an extra time of ~744 days to reach Earth compared to image A. (Credit: Shinshu University, the National Astronomical Observatory of Japan)

Figure 4：Same as Figure 2, but for comparison of absorption features seen in images A (left) and B (right), taken in 2010 February (black) and 2014 April (red/blue). Both did not show any clear time variation in profile, although carbon absorption became slightly shallow. (Credit: Shinshu University).

Figure 5: Possible locations of gas clouds in the outflow shown in an artist's rendition of the central region of the quasar. The outflow is gas streaming outward along the curved mesh, which is distinguished from a jet that is blowing vertically. The lines A and B indicate the light paths observed. A cloud along a sightline A creates absorption only in image A, while those along both sightlines of A and B make absorption features in both images. The current observations do not give information on the size, shape, or density of the clouds. (Credit: Shinshu University).