The following release was received from Swinburne University of Technology and is reprinted here in its entirety for the convenience of our readers:
(Original Article: http://www.swinburne.edu.au/media-centre/news/2014/09/three-eyes-on-the-sky-track-laws-of-nature-10-billion-years-ago.html)


Astronomers have focused the three most powerful optical telescopes in the world on a single point in the sky to test one of Nature's fundamental laws.

An international team, led by researchers from Swinburne University of Technology, observed a quasar – the extremely bright surroundings of a supermassive black hole – using the Very Large Telescope in Chile and the W M Keck Observatory and Subaru Telescope, both in Hawaii.

The quasar light passed through three different galaxies, some 10, 9 and 8 billion years ago, on its way to Earth. These galaxies absorbed a characteristic pattern of colours out of the quasar light, revealing the strength of electromagnetism – one of Nature's four fundamental forces – in the early and distant Universe. 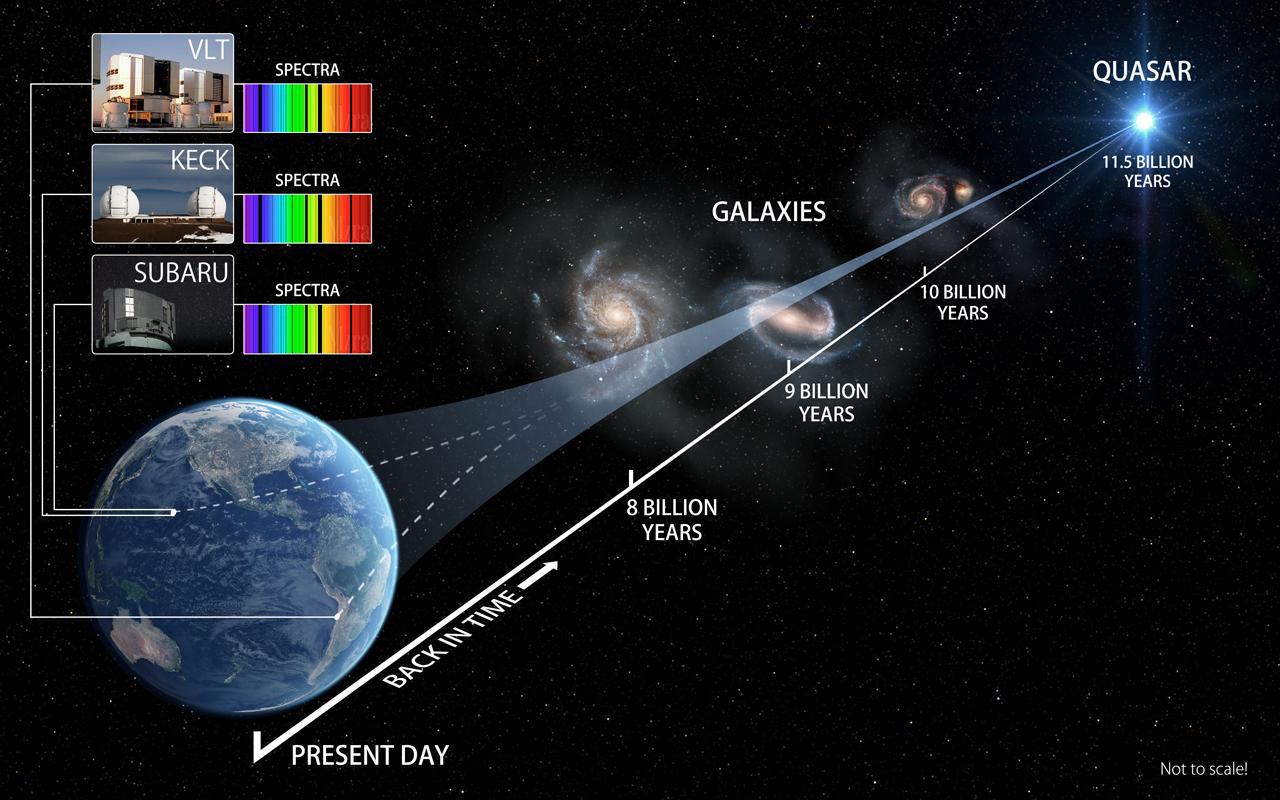 "We spread the light very finely into its component colours, producing a rainbow with a 'barcode' pattern of missing colours. We can then measure electromagnetism by 'reading' this barcode," said Tyler Evans, Swinburne PhD student and lead author of the new study.

"We need to compare the barcode patterns from three telescopes to be sure they're right."

Previous studies, using a large number of quasars, had found hints that electromagnetism might be different in the distant reaches of the Universe – slightly weaker or slightly stronger than on Earth.

"So it's crucial to triple check whether and how the telescopes are distorting the barcodes."

By comparing the barcodes, the researchers found small differences between the telescopes.

"The beauty of our method is that we can also use the barcodes themselves to correct each telescope accurately," said Swinburne Associate Professor Michael Murphy, who co-authored the work.

"Once corrected, all three telescopes gave the same answer: electromagnetism hasn't changed, within a few parts per million, over 10 billion years. I think this is the most reliable measurement of its kind so far".

The team is now making similarly careful measurements in many other galaxies.

"With our new techniques and new quasar observations recently complete, we can make the most accurate check to see whether electromagnetism's strength really is changing or not," Associate Professor Murphy said.

The study forms part of Tyler Evans' PhD work and uses Swinburne's collaborative agreement with Caltech (USA) to access the Keck Observatory in Hawaii. The results are accepted for publication in the Monthly Notices of the Royal Astronomical Society and are available online.