A team of astronomers from the National Astronomical Observatory of Japan (NAOJ), the Konan University and the University of Hyogo in Japan, the University of Notre Dame, and New Mexico State University (Note 1) has used the 8.2 m Subaru Telescope's High Dispersion Spectrograph (HDS) to discover a low-mass star, SDSS J0018-0939 (Fig. 1), that exhibits the peculiar chemical abundance ratios associated with the process of creating new atomic nuclei (nucleosynthesis) in a first-generation very-massive star. Until now, no observational evidence has supported numerical simulations of the existence of very-massive stars among the first generation of stars formed after the Big Bang.. 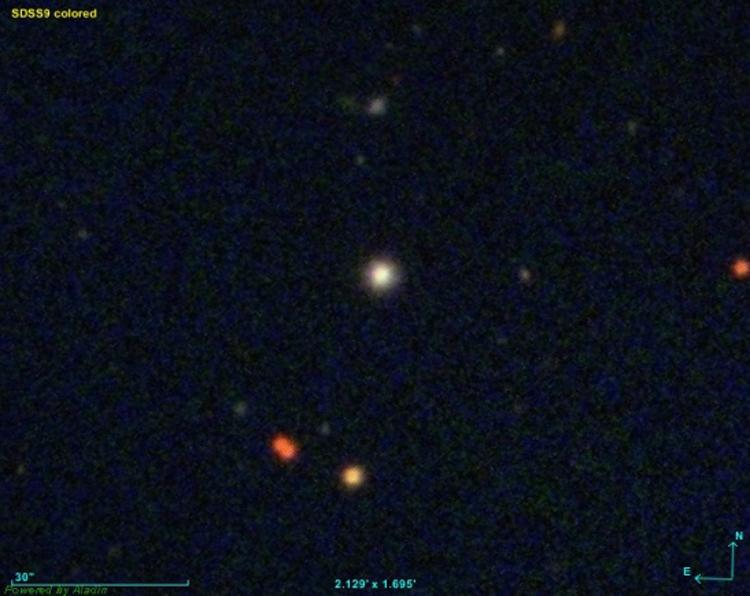 Figure 1: An optical image of the star SDSS J0018-0939, obtained by the Sloan Digital Sky Survey. This is a low-mass star with a mass about half that of the Sun; the distance to this star is about 1000 light years; its location in the sky is close to the constellation Cetus. (Credit: SDSS/NAOJ)

The Importance of the Mass of First-Generation Stars

Numerical simulations have made significant progress in understanding the formation of the first stars (Note 2). Recent simulations suggest that a small fraction of very-massive stars with masses exceeding one hundred times that of the Sun could have formed in the early Universe, even though the large majority of first stars formed with masses of ten to a hundred times that of the Sun. Their strong UV radiation and energetic explosions are likely to have had a significant impact on the evolution of stellar systems.

Supernova explosions ejected elements formed by the first massive stars and dispersed them into the gas that formed the next generations of stars (Fig. 5).

Stars with masses slightly less than the Sun's have very long lifetimes, long enough that they are still shining. The Milky Way contains such low-mass stars with low overall metal content, including the elements produced by the first massive stars. The distinctive chemical abundance patterns of these stars can be used to estimate the masses of the first stars.

Over the past thirty years astronomers have conducted large-scale investigations to find low-mass, metal-poor stars formed in the early Universe. Follow-up spectroscopic studies, which measured their chemical abundances, have identified stars that recorded the abundance patterns associated with the first stars that had several tens of solar masses and produced large amounts of carbon and other light elements (Note 3). However, no previous research of low-mass metal-poor Milky-Way stars has found the signature of supernova explosions of very-massive stars with more than 100 solar masses, which synthesize large amounts of iron but little carbon (Note 4).

Discovery of a Low-Mass Star with Unique Chemical Abundance Ratios

The current team of researchers used the High Dispersion Spectrograph mounted on the Subaru Telescope to conduct a high-resolution spectroscopic follow-up of a large sample of low-mass metal-poor stars (Note 5, Fig. 1) and discovered a star, SDSS001820.5-093939.2 (SDSS J0018-0939), that exhibits a very peculiar set of chemical abundance ratios. Whereas the star contains an amount of iron 300 times lower than the Sun's, it is significantly deficient in lighter elements such as carbon and magnesium. The extremely low abundances of elements other than iron indicates that this star formed directly from a hydrogen gas cloud that contained elements dispersed by a first-generation massive star.

Nucleosynthesis models for supernova explosions of massive stars, which successfully reproduce the abundance ratios found in most of the early-generation stars previously known (Fig. 2) do not readily explain the chemical abundance ratios observed in the newly discovered star. 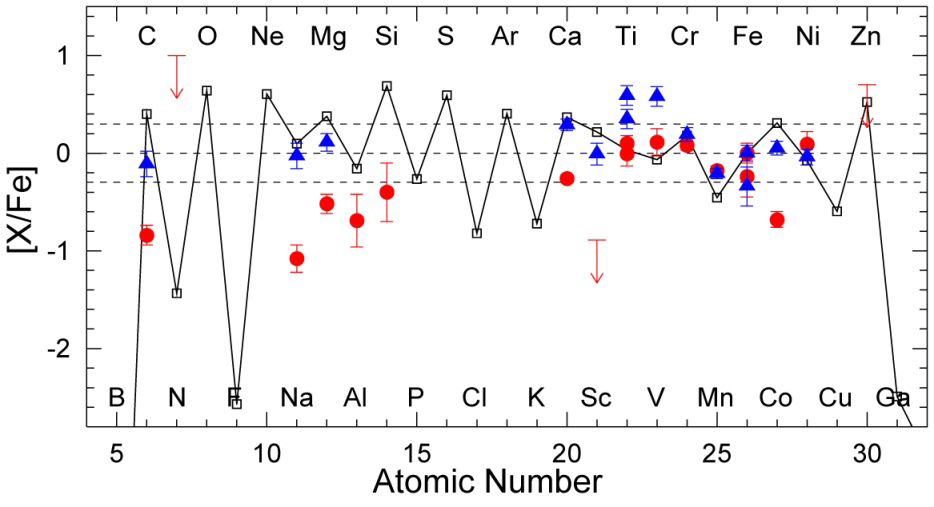 Figure 2: The chemical abundance ratios (with respect to iron) of SDSS J0018-0939 (red circles) compared with model predictions for a supernova explosion of a massive star. The model well-explains the chemical abundance ratios of a comparison star (a similar low-mass star, G39-36; blue triangles), whereas the lighter elements, such as carbon and magnesium, as well as the heavier element cobalt, of SDSS J0018-0939 are not well-reproduced. (Credit: NAOJ) 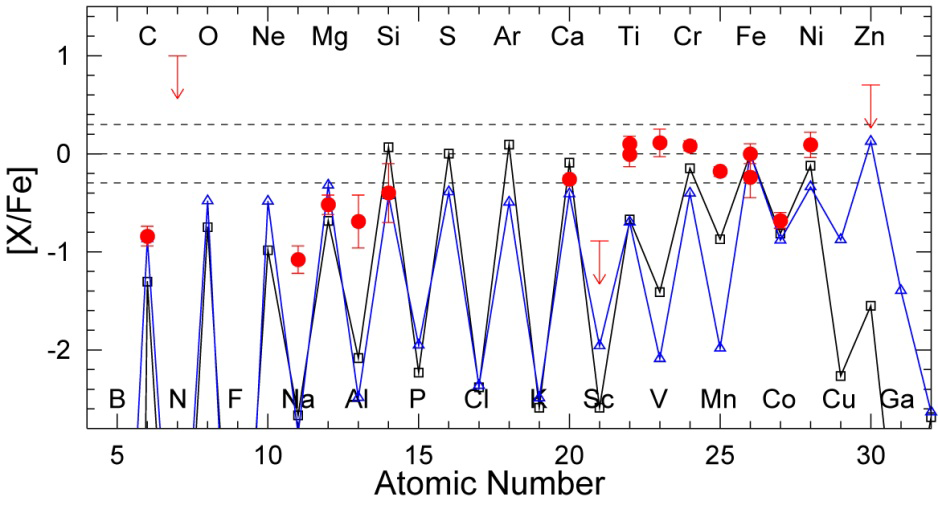 Figure 3: The chemical abundance ratios (with respect to iron) of SDSS J0018-0939 (red circles) compared with model prediction for explosions of very-massive stars. The black line indicates the model of a pair-instability supernova by a star with 300 solar masses, whereas the blue line shows the model of an explosion caused by a core-collapse of a star with 1000 solar masses. The abundance ratios of sodium (Na) and aluminum (Al), which are not well-reproduced by these models, might be produced during the evolution of stars before the explosion, but that is not included in the current model. (Credit: NAOJ)

Impact of this Study

The strong UV radiation, energetic explosions, and production of heavy elements from very-massive stars influence subsequent star as well as galaxy formation. If stars with masses up to 1000 solar masses existed, their remnants are probably black holes with several hundred solar masses, which may have formed the "seeds" of super-massive black holes, such as found in the Galactic Center.

Further research to find early generations of low-mass metal-poor stars is necessary to estimate the proportion of very-massive stars among the first stars. If very-massive stars are relatively common, next-generation large telescopes such as the Thirty Meter Telescope (TMT) and the James Webb Space Telescope (JWST) will have the potential to directly detect groups of such first stars in studies of the most distant galaxies (Note 6).

The research paper on which this release was based, "A chemical signature of first-generation very-massive stars" by W. Aoki, N. Tominaga, T. C. Beers, S. Honda, Y. S. Lee, is published in Science on August 22, 2014.

2.Numerical simulations usually start with considering initial non-uniform distributions (i.e., inhomogeneities) in the dark matter density of small regions formed after the Big Bang. The larger gravitational forces associated with a high-density region gathers normal (i.e., baryonic) matter, such as primordial gas, and the density of the region increases. First stars probably formed in such regions.

3.A massive star ends its life by collapse of its central core and a supernova explosion, leaving behind a black hole or a neutron star. The explosion ejects a certain amount of heavy elements, from carbon to iron. Previous observations of early-generation low-mass stars have identified stars exhibiting elements produced by such supernovae.
Discovery of the Most Metal-deficient Star Ever Found: Studying Nucleosynthesis Signatures of the First Stars
A single low-energy, iron-poor supernova as the source of metals in the star SMSS J031300.36−670839.3

4.The central temperature of evolved very-massive stars becomes so high that electron-positron pair-creation occurs, resulting in the collapse of the central core, and a nuclear reaction runaway that explodes the star. If the star is more massive than about 300 solar masses, the explosive nuclear reaction is insufficient to prevent the core from collapsing, resulting in the direct formation of a black hole, but some fraction of the material might have still been ejected.

5.The team conducted chemical abundance measurements based on data obtained with the Subaru Telescope High Dispersion Spectrograph (HDS) for early generations of stars found by the SDSS. SDSS J001820.5-093939.2 (SDSS J0018-0939) is a star showing peculiar abundance ratios among 150 stars studied with the Subaru Telescope. The team used the same instrument to make a more detailed measurement.
6.Observations of more distant objects allow scientists to study earlier eras of the Universe. Although the next generations of large telescopes may not even be able to distinguish individual first stars, they should be able to observe groups of such stars, if very-massive stars indeed existed. 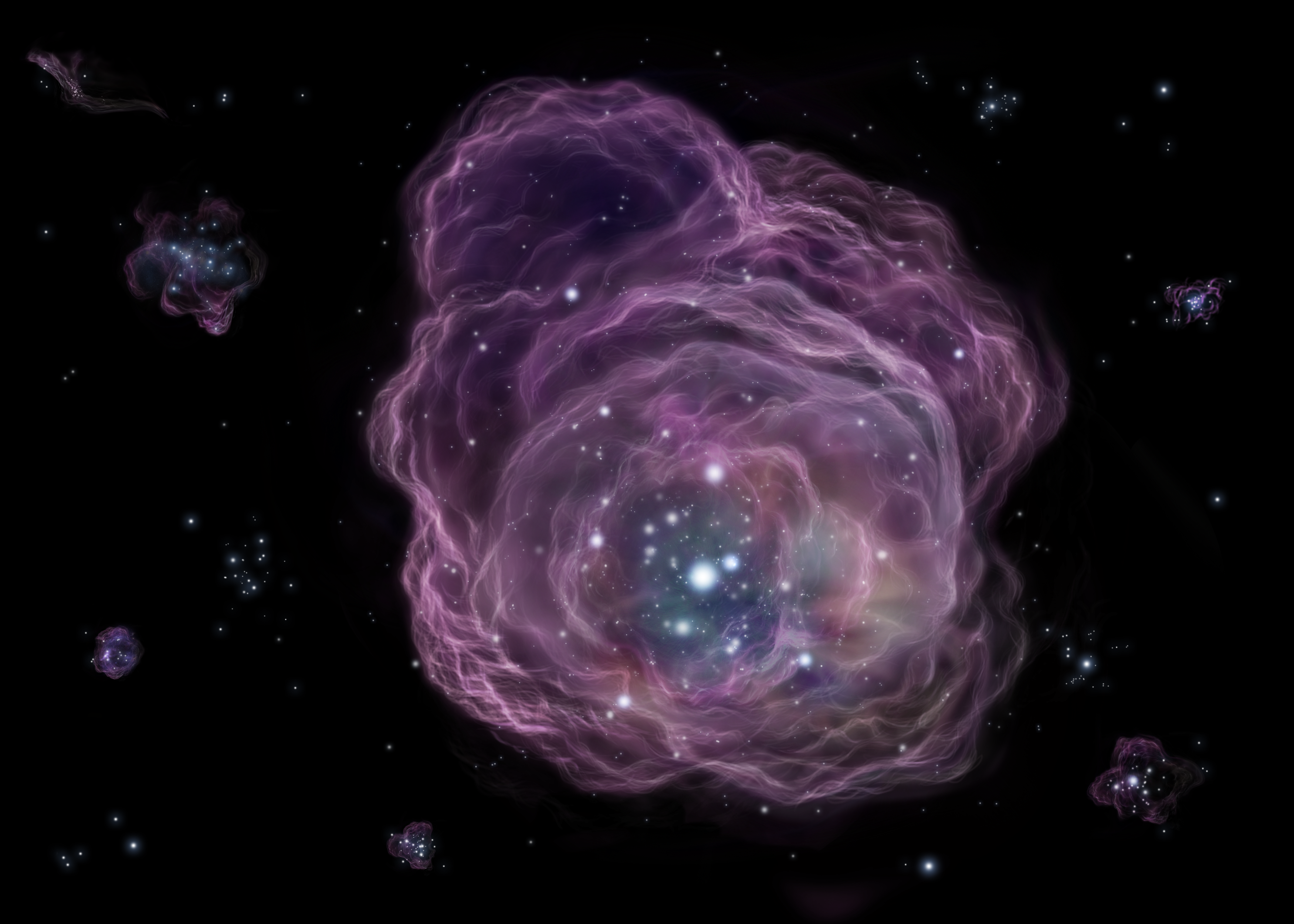 Figure 4: Artist's rendition of massive, luminous first-generation stars in the Universe which would form a cluster. The most massive ones, which could be over a 100 times more massive than the Sun, exploded and ejected material that included heavy elements, particularly iron. (Credit: NAOJ) 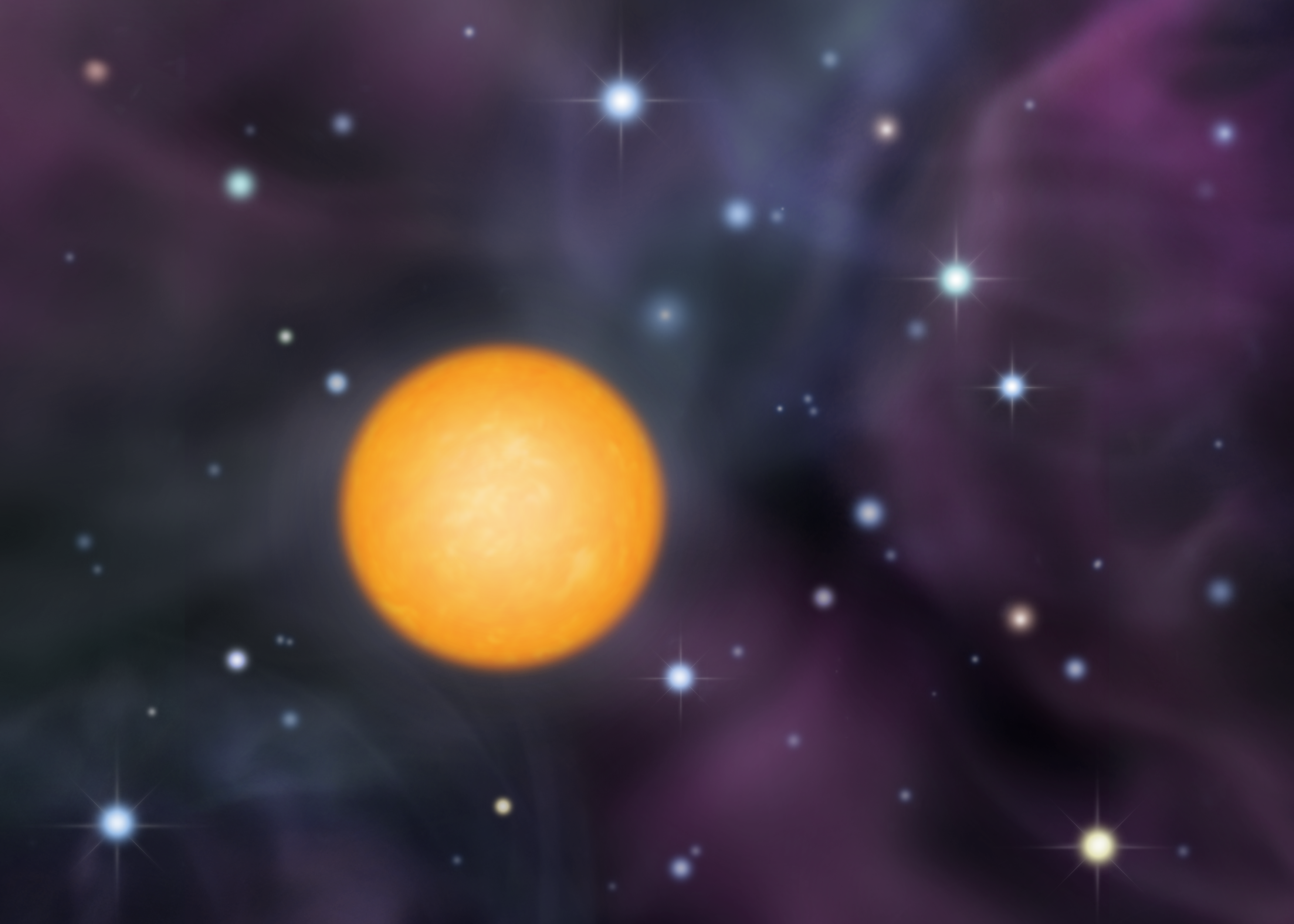 Figure 5: Artist's rendition of new generations of stars. The material that included heavy elements from the first-generation, very-massive stars mixed with hydrogen around the star. New generations of stars formed from the gas clouds that included small amount of heavy elements. SDSS J0018-0939, a low-mass star with a long lifetime, formed as one of these second-generation stars, recording the products of a first-generation very-massive star. (Credit: NAOJ)