Astronomers using the Subaru Telescope and Hubble Space Telescope have found that Jupiter's Galilean satellites (Io, Europa, Ganymede, and Callisto) remain slightly bright (up to one millionth of their normal state) even when in the Jovian shadow and not directly illuminated by the Sun (Figure 1). The effect is particularly pronounced for Ganymede and Callisto. The finding was made by researchers at Tohoku University, Institute of Space and Astronautical Science/Japan Aerospace Exploration Agency (ISAS/JAXA), National Astronomical Observatory of Japan (NAOJ), and elsewhere. 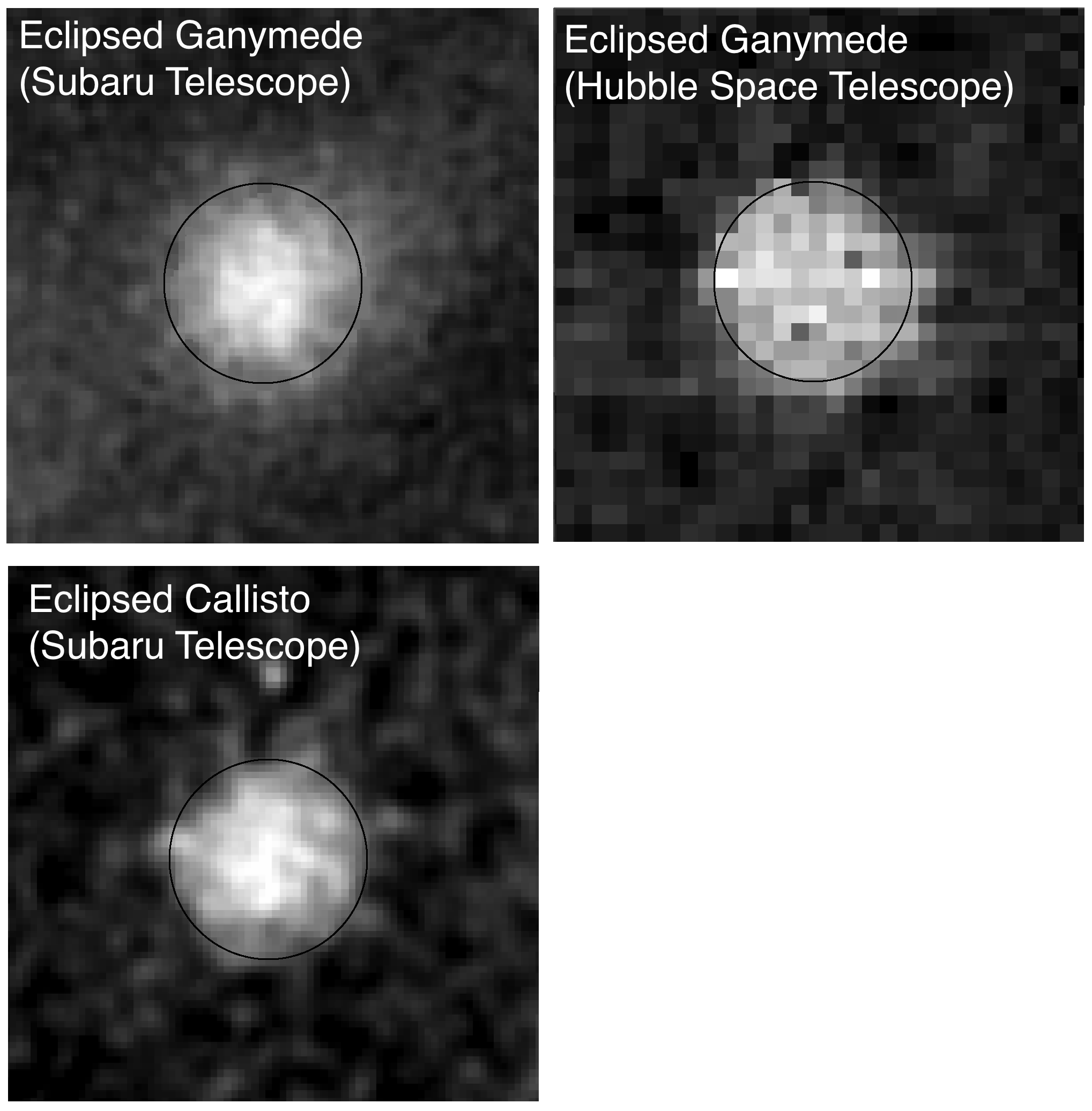 Figure 1: Images of Ganymede and Callisto while eclipsed by Jupiter obtained during their eclipse. Top left is Ganymede observed through Subaru Telescope, top right is Ganymede through Hubble Space Telescope, bottom left is Callisto from Subaru Telescope, respectively. Each frame is 4 arcsec x 4 arcsec, and the black circle indicates the apparent diameter of the object. A short movie linked here shows the Europa's eclipse as it goes into the shadow of Jupiter. From the top of the video is Europa, Ganymede, and Jupiter, respectively. (Credit: NAOJ/JAXA/Tohoku University)

The mechanism of this phenomenon is still under investigation, but the researchers suggest that indirect forward scattering of sunlight by hazes in the upper Jovian atmosphere could be the reason for the illumination. This effect is similar to the one that causes Earth's moon to look red during a total lunar eclipse.

The type of continuous observations of the Galilean satellites in eclipse made by the Japanese team also provides a much better basis for studying the hazes in Jupiter's atmosphere, which are difficult to study otherwise (Note 1). In addition, this detailed study method for a planetary atmosphere will provide new insights about the atmospheres of exoplanets, which are only beginning to be studied.

Dr. Kohji Tsumura (FRIS, Tohoku University), the PI on the project, explained that this unexpected finding is really the outcome of attempts to measure diffuse light from the distant universe. "It is a serendipitous discovery made as a by-product of a cosmological study," he said. "It is very interesting that it provides us a new method to investigate the atmosphere of Jupiter and of exoplanets. I will keep studying from nearby space (the solar system and exoplanets) out to the farthest universe through this project."

The research team started its observations using IRCS and AO188 on Subaru Telescope in February of 2012. The idea was to detect the diffuse light from the most distant parts of the universe. To do this, team members planned to use the Galilean satellites in eclipse as "occulters" to block distant background emissions. This would allow an extremely accurate separation of the background light from the very bright foreground radiation from our solar system (known as the zodiacal light).

The team assumed that the Galilean satellites would be "dark" while in Jupiter's shadow, and the difference in brightness[??] between the dark satellite as an occulter and its surrounding sky would allow the team to determine the still-unknown level of background emission from the distant universe. Instead, they found an unexpected surprise: Ganymede and Callisto were still somewhat "bright" (illuminated) even when eclipsed (relative to the expected level of near-zero). Their eclipsed luminosity was one millionth of their un-eclipsed brightness, which is low enough that this phenomenon has been undetected until now (Figure 2). 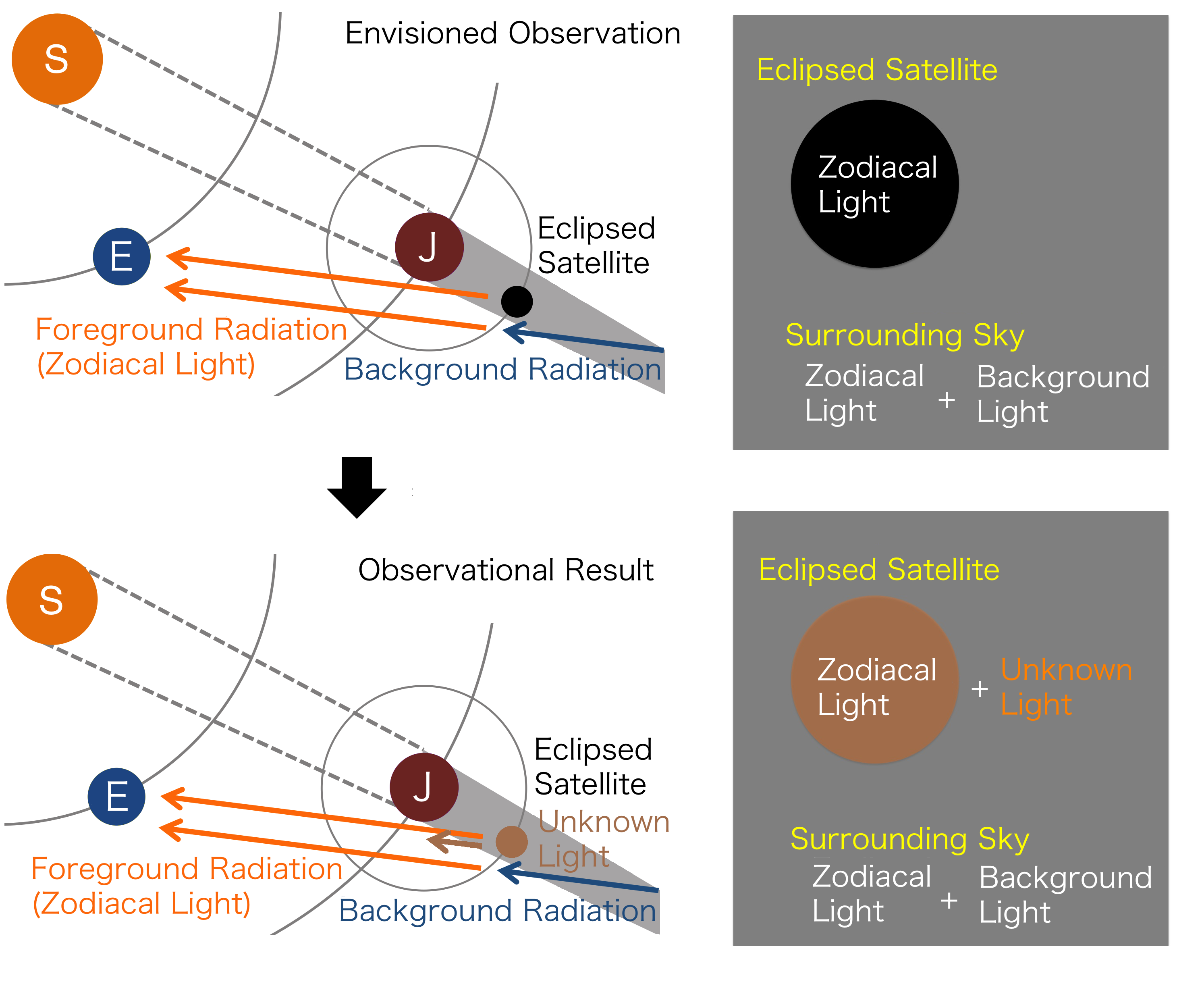 To understand why the Galileans remain ever-so-slightly bright even when they're in eclipse, the project team of astronomers and planetary scientists considered several theories based on their multi-band observational data, including data from Spitzer Space Telescope. The most plausible is that the Galilean satellites are still illuminated during eclipse by sunlight that is scattered by hazes in the Jovian upper atmosphere. By comparison, the sunlight refracted in the atmosphere does not contribute to the illumination during the eclipse.

Although Jupiter is a familiar planet, there are many unresolved issues about its atmosphere. One example is the origin of the cloud particles composing Jupiter's banded appearance. The cloud particles are assumed to grow from tiny particles called aerosols or hazes. Researchers expect that those hazes form somewhere in the upper part of Jupiter's atmosphere, which is very difficult to observe (Figure 3). The unexpected discovery of haze-induced brightening of the Galileans provides a new way to study the mysterious part of Jupiter's atmosphere. In addition, since astronomers usually observe the planets in our solar system by reflected sunlight, one of the unique aspects of these new observations at Jupiter is that observers can precisely measure the transmitted sunlight through the planetary atmosphere (Note 2). 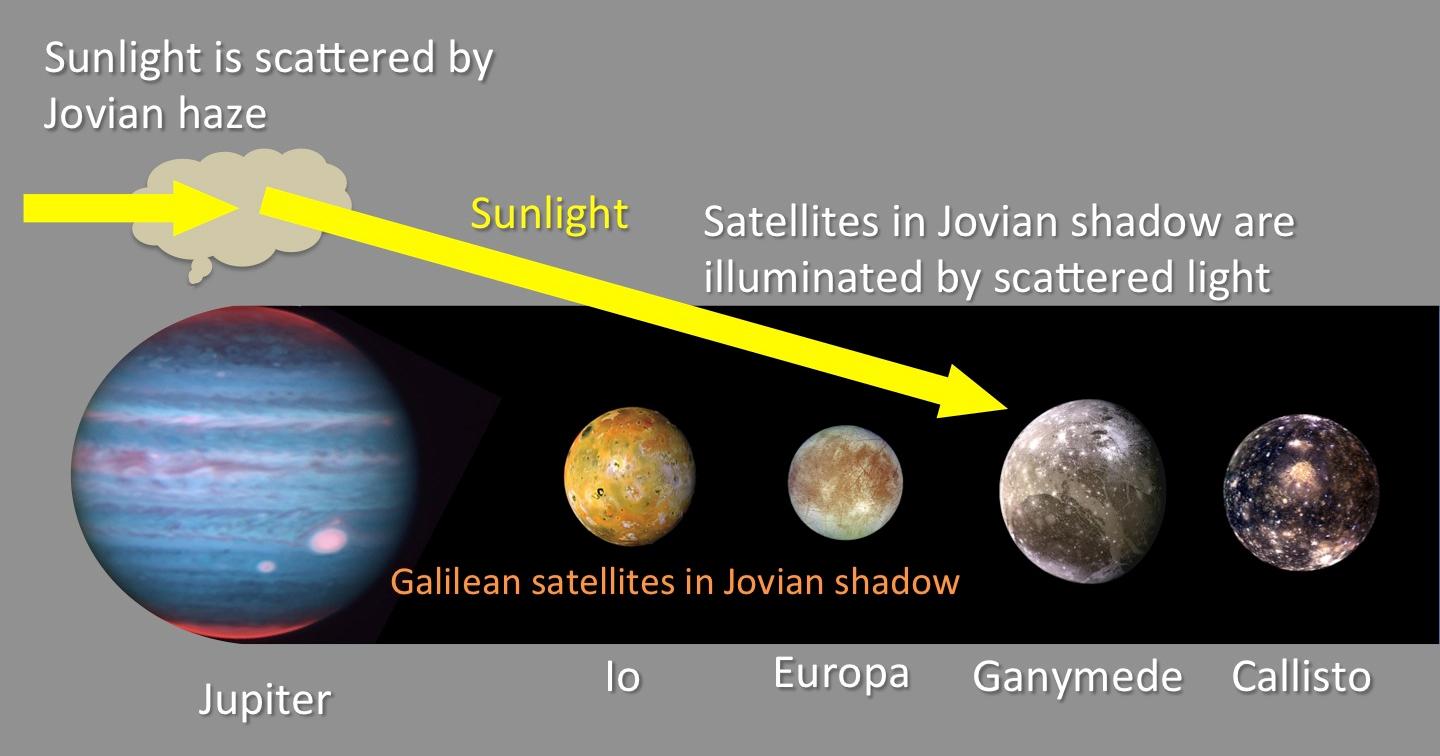 Figure 3: A schematic image of the model to show that the Galilean satellites eclipsed in Jovian shadow are illuminated by scattered sunlight by the haze in the Jovian upper atmosphere. The size and the distance of the satellites are not to the scale. This process is similar to one that causes red color of the Earth's Moon during its total eclipse. (Credit: NAOJ/JAXA/Tohoku University/NASA)

This new method of studying the upper atmosphere of Jupiter via transmitted sunlight provides a basis for the study of other planetary systems. Exoplanet discoveries now occur quite regularly and atmospheres around some of them have been investigated using "transit observations" (when the exoplanet passes between us and the host star, resulting in the star becoming slightly dimmer). In such observations, some characteristics of the exoplanet's atmosphere are revealed as host starlight passes through it. This is the same situation seen with Jupiter and its Galilean satellites, and makes studies of transmitted sunlight of the planets in our solar system essential for comparison.

The observations for this project were very challenging because the Galilean satellites (while eclipsed) are extremely faint and they are located next to the incredibly bright disk of Jupiter. In addition, the eclipses only happen at very specific times, and Jupiter and the satellites are continuously in motion during the observations. The complexity of the situation requires the observation procedure to be much more sophisticated. This new discovery required thorough preparations by the project team and conscientious support by the operations staff. (Figure 4) 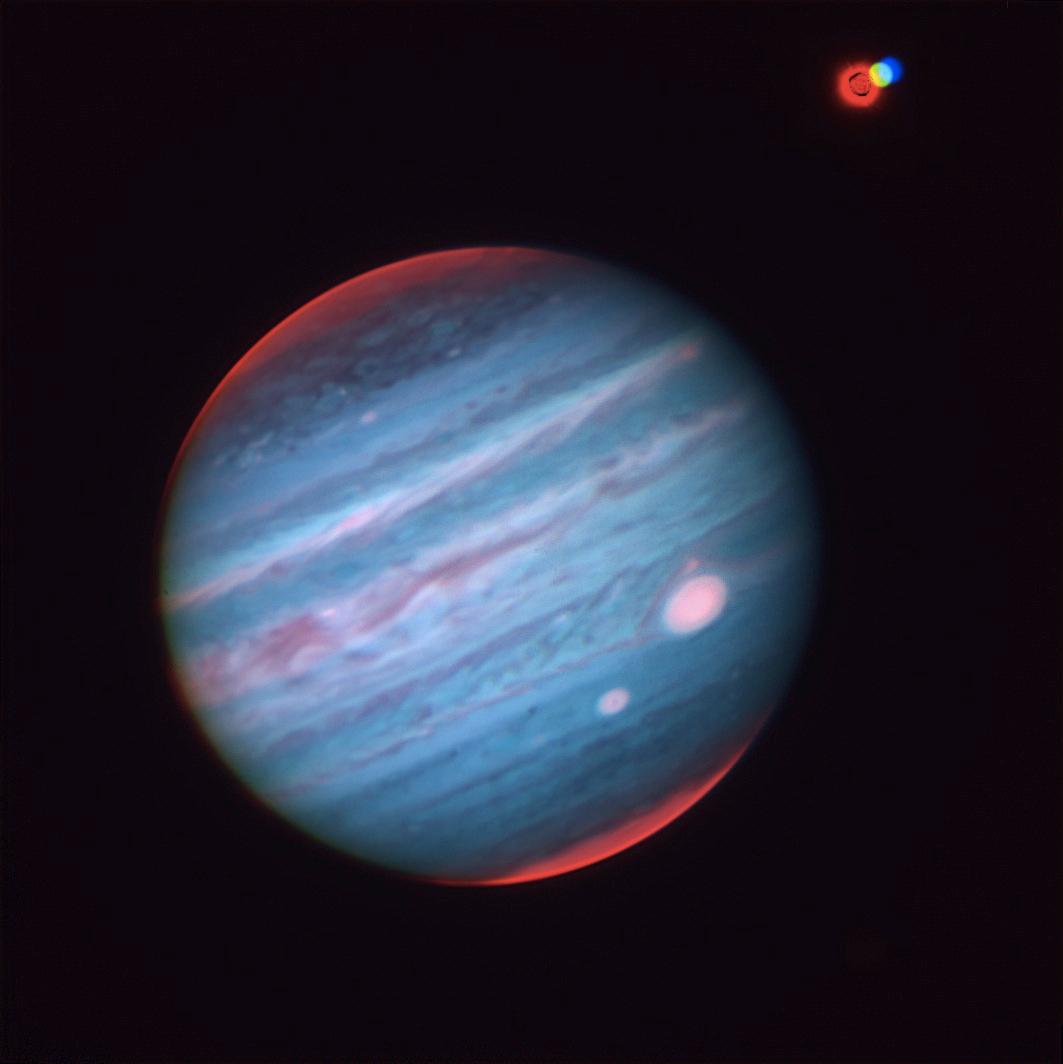 Figure 4: Three-color (JHK) image of Jupiter and Ganymede obtained by Subaru Telescope. Because Ganymede moves with respect to Jupiter during the observations, it appears as three separately colored dots. Image taken at around 5 am, July 27, 2012 in Hawaii Time. Blue color is for J band (1.3 micrometer), green is for H band (1.6 micrometer), and red is for K band (2.2 micrometer), respectively. (Credit: NAOJ/JAXA/Tohoku University)

1.Observations of Jupiter's upper atmosphere were conducted by the Galileo spacecraft, and by "occultation" of microwaves from field stars or spacecraft located behind Jupiter. However, opportunities to observe these events are rare and limited, thus the observations of the Galilean satellite eclipses are a unique method to study Jupiter's upper atmosphere.

2.Transmitted light through the planetary atmosphere was observed by the occultation methods described in (*1) and the Venus transit. However, they are very rare events, too.

3Department of Astronomy, Graduate School of Science, The University of Tokyo, Japan

4Department of Astronomy, Arizona University, U. S. A.

5Subaru Telescope, National Astronomical Observatory of Japan, U. S. A.

12Spitzer Science Center, California Institute of Technology, U. S. A.