An international team of astronomers, led by Dr. Tae-Soo Pyo (Subaru Telescope, NAOJ), has revealed a complicated outflow structure in the binary UY Aur (Aurigae). The team observed the binary using the Gemini North's NIFS (Near-Infrared Integral Field Spectrometer) with the Altair adaptive optics system (Note 1). The team found that the primary star has a wide, open outflow, while the secondary star has a well-collimated jet.

Because many stars form together as companions in binary or multiple systems, investigating these systems is essential for understanding star and planet formation. Although jets (i.e., narrow bright streams of gas) and outflows (i.e., less collimated flows of gas) from single young stars are ubiquitous, only a few observations have shown jets or outflows from multiple, low-mass young stars. Therefore, the current team chose to examine the outflow structure of binary UY Aur, which is a close binary system composed of young stars separated by less than an arcsecond (0".89).

UY Aur has a very complicated structure. Both the primary star (UY Aur A, more massive and brighter) and the secondary star (UY Aur B, fainter and cooler) have small circumstellar disks (disks of gas and material orbiting around them). In addition, a circumbinary disk surrounds the two stars. Such disks are difficult to detect, and this is only the second disk of this type that has been resolved and imaged (Note 2). Receding ("redshifted") jets have been observed, and approaching ("blueshifted") ones have been reported for this system. However, their driving sources are not clear, because the spatial resolution of the images was too low (> one arcsecond).

To better understand this system, the team began by trying to identify the driving source of the receding jets. To separate the binary stars and distinguish their driving sources, they used Gemini North's NIFS with its adaptive optics system to observe this close binary system in the 1-micrometer infrared wavelength region. Since ionized iron gas ([Fe II]) traces shocked gas in jets and outflows very well, the team used iron gas emissions to examine the emission gas distribution. They found that [Fe II] is associated with both the primary and the secondary stars (Figure 1). 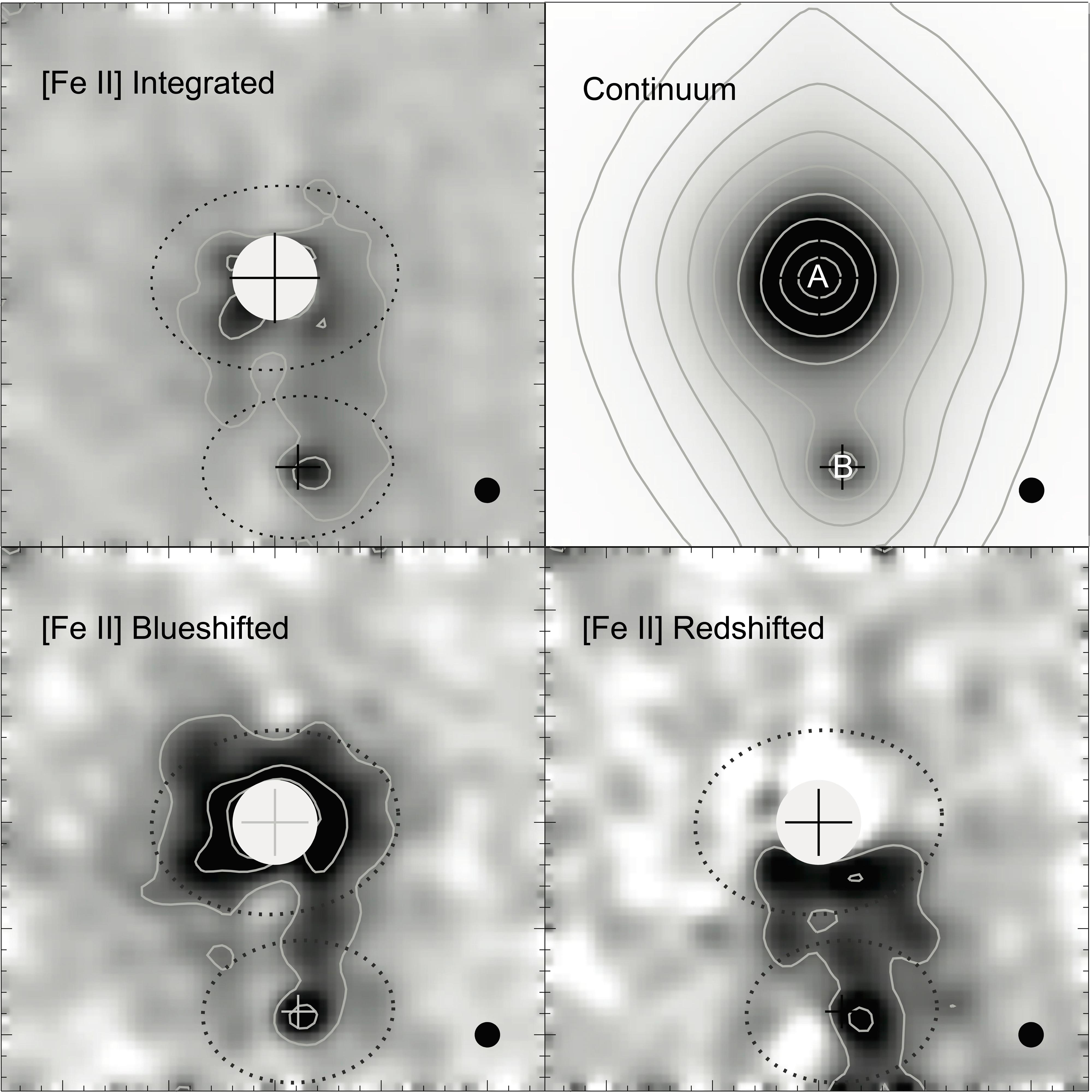 Figure 1: Emission images of UY Aur. The large plus marks indicate the primary star, located in the upper portion of each panel and designated as "A" in the continuum image. The smaller plus marks indicate the secondary star, located below the primary star and labeled as "B" in the continuum panel. Large tick marks correspond to measures of 1 arcsecond (140 Astronomical Unit). The filled circles at the bottom right corners show the spatial resolution (=0.12"). (Credit: NAOJ)

In addition, they found that the shape of the gas distribution conformed to simulations of gas streaming between the primary and secondary stars. However, the high velocity of the gas (100 km/s or > 20,000 mile/h) indicated that it emanated from the close vicinity of stars rather than arose in the disk gas around the two stars.

Further investigation of the emission structure involved separation of the receding and approaching emissions (Figure 1). The team found that the distribution of gas was different for each of the stars. While the approaching gas was widely spread in an outflow from the primary star and slightly connected with the secondary star, the receding gas was spread widely toward the secondary star and flowing beyond it (Figure 1).

What explains this difference? The team analyzed the system in terms of bipolar outflows, i.e., each star has a disk and ejects both blueshifted (approaching) and redshifted (receding) outflows or jets. The primary ejects wide,open bipolar outflows. Its redshifted (receding) outflow overlaps with the secondary. In contrast, the approaching gas from the secondary is distributed in a well-collimated bipolar jet, with its blueshifted flow tilted toward the wide, open wind from the primary (Figure 2). It is known from mid-infrared (wavelength of ~10 micrometer) observations that the circumstellar disk of the secondary is not aligned with the plane of the circumbinary disk. This misalignment is consistent with the jet from the secondary tilted toward the wide, open outflow from the primary star.

Two jets from a binary system can be explained if the jets emanate from each of the star-disk systems. Some binaries show only one jet or outflow. A larger sample of [Fe II] gas distribution toward binary and multiple young-star systems can clarify how typical the outflow structure of the UY Aur system is. 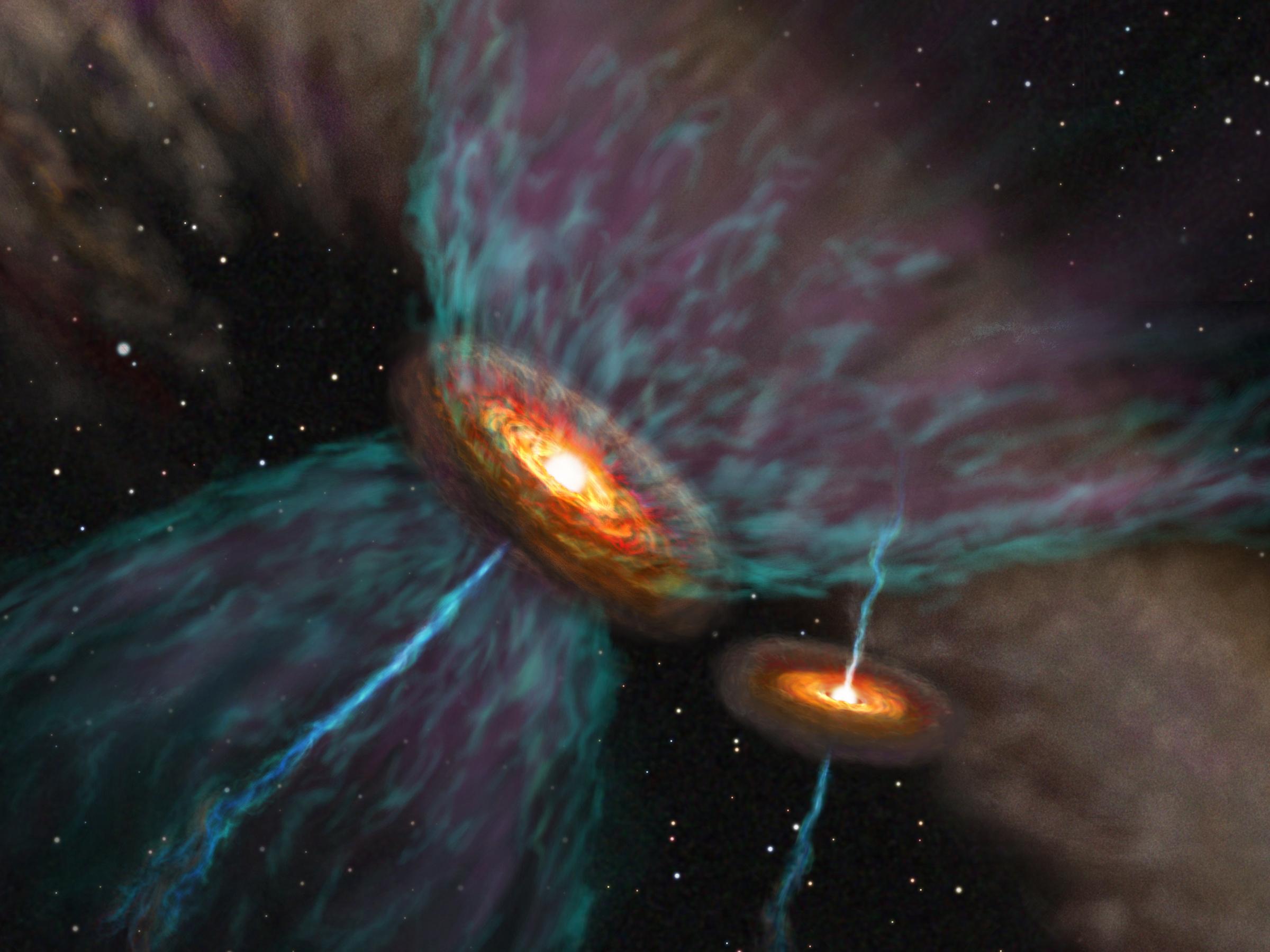 1.The observations were conducted as part of the Subaru/Gemini Time Exchange Program, during which astronomers from each telescope's community can mutually access some of each telescope's unique instruments.

2.The first circumbinary disk to be resolved and imaged was around the GG Tau A system. To view this image obtained with Subaru Telescope's Coronagraphic Imager with Adaptive Optics (CIAO), go to: http://subarutelescope.org/Introduction/instrument/CIAO.html.