The following release was received from the Institute for Cosmic Ray Research at the University of Tokyo and is reprinted here in its entirety for the convenience of our readers:
Original Article: (http://www.icrr.u-tokyo.ac.jp/2013/12/09140001.html)

Using wide-field imaging data of Subaru Telescope, a team of international astronomers led by Dr. Suraphong Yuma (JSPS Fellow) and Dr. Masami Ouchi (Associate Professor) at ICRR, the University of Tokyo has discovered twelve galaxies expelling hot oxygen gas extending up to 250 thousand light years, beyond the sizes of the galaxies. These galaxies are located 9 billion light years from the Earth. Some of these galaxies host a super massive black hole (SMBH), while some show violent star formation with no SMBH. The vast amount of energy produced by the SMBH or star formation activity is able to heat up the gas in the galaxies, and drive the strong outflow of hot oxygen gas. These distant galaxies are thought to be in their final phase of galaxy growth, with star formation being quenched by the expulsion of gas needed to produce new stars. This is the first discovery of the large physical extents of these energetic oxygen-gas outflows driven by SMBH and star formation.

Astronomers attempt to understand how galaxies like our Milky Way have formed and evolved over time by observing galaxies at the present and in the past. Some galaxies are converting gas to stars from a large reservoir of gas in the galaxy, while others have ceased their star formation and are just letting their stars dying out. In the latter galaxies, known as elliptical galaxies, there are almost no stars younger than several billion years old, and so the quenching of star formation is believed to have taken place several billion years previously. This quenching takes place in the final stage of galaxy growth, but the physical mechanism is not clear. It is thought that the gas can escape from distant galaxies through heating by SMBH and/or star-formation. However, existing observations do not make it possible to determine which quenching mechanism is the most important.

"Because oxygen in the Universe is only produced within galaxies by nuclear fusion in the cores of stars, we conceived of the idea to identify distant galaxies with gas outflows from their extended profiles of oxygen gas. We therefore looked for distant galaxies associated with large clouds of ionized oxygen emission, which were efficiently located with Subaru's prime focus camera, Suprime-Cam, at optical wavelengths," explains Dr. Yuma. "So far, outflows have been studied separately in galaxies with either SMBH or star formation, whereas our search technique works regardless of the energy source. Our search was conducted in the Subaru/XMM-Newton Deep Survey (SXDS) field that has the ideal Subaru data sets."

Dr. Alyssa Drake, who recently completed her Ph.D. at Liverpool John Moores University, UK, picks up the story. "As the Universe expands, the light emitted by galaxies is stretched out on its way to us, changing the colors of galaxies and making them redder. We can use this fact to calculate the distances to galaxies if we measure their colors accurately.

From the search the team pinpointed 12 galaxies whose oxygen gas emission extends over more than 100,000 light years, corresponding to the size of the Milky Way. Due to their spatial extent, they call these galaxies [OII] blobs or OIIB. Subaru images (Figure 1) show diffuse oxygen emission extending beyond the stellar components of the galaxies. 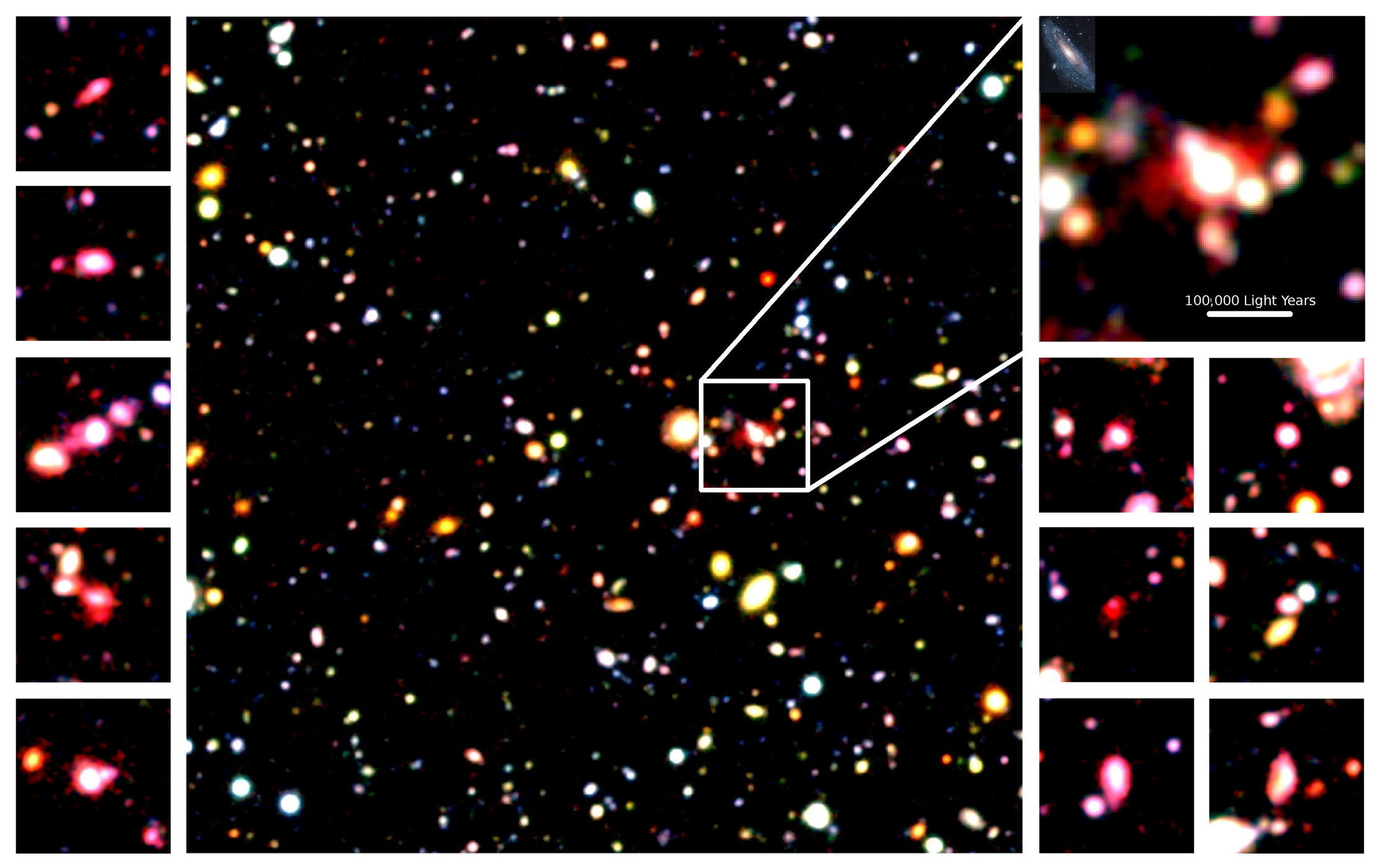 Figure 1: The color composite Subaru images around the largest OIIB1 (center), zoom-in image of OIIB1 (top right), and the eleven other OIIBs (left and right). The size of each small panel corresponds to 400 thousand light years. The picture of Andromeda galaxy (by Robert Gendler) in the top right panel was scaled as if it were at the same distance as OIIB. Credit: NAOJ, the University of Tokyo (Suraphong YUMA)

While OIIBs are producing tens to hundreds of stars per year from gas, the star-formation rates of well-matured OIIBs are lower than those of typical star-forming galaxies with the same stellar mass. "This would be a signature of quenching star-formation activity in the process of gas outflow," remarks Associate Prof. Ouchi. "According to our estimates, about 3% of star-forming galaxies at this epoch are right in the middle of the gas outflow phase, which is a new and important insight for understanding galaxy formation."

Gas outflow has been confirmed in two OIIBs by optical spectroscopic observations with the Subaru telescope and the Very Large Telescope operated by the European Southern Observatory (ESO). "The spectra present absorption features made of cold gas outflowing from the galaxy. The intense activity of star formation and/or SMBH would trigger the outflow," explains co-author Dr. Chris Simpson, a senior lecturer at Liverpool John Moores University.

One of the OIIBs has a very fast outflow velocity of 600 km/s, suggesting a strong gas flow energized by a powerful SMBH. "This object, dubbed OIIB1, is the largest OIIB that we found in this study. OIIB1 is more than twice as large as Milky Way; its oxygen emission extends over 250,000 light years," adds Dr. Yuma. This giant blob has been detected in X-rays, a clear signature of SMBH activity. Prof. Masayuki Umemura of Tsukuba University comments, "This kind of object is very rare and can be a milestone to reveal gas outflow powered by SMBH."

This research is published in the December 10, 2013 issue of The Astrophysical Journal. The work was supported by KAKENHI (23244025) Grant-in-Aid for Scientific Research (A) through Japan Society for the Promotion of Science (JSPS).

Member of the research team are