Marching to the Beat: Subaru's FMOS Reveals the Well-Orchestrated Growth of Massive Galaxies in the Early Universe

Using the Fiber Multi-Object Spectrograph (FMOS) mounted on the Subaru Telescope, a team of astronomers participating in the Cosmological Evolution Survey (COSMOS) has found that galaxies, over nine billion years ago, provided a nurturing environment for the birth of new stars at remarkable rates while at the same time as orderly as commuters on a typical Tokyo workday. Even at these early times, there are signs of maturation, since the surroundings of massive galaxies were relatively dusty and enriched by heavier elements.

"These findings center on a major question: What was the Universe like when it was maximally forming its stars?" says John Silverman, the principal investigator of the FMOS-COSMOS project at the Kavli Institute for the Physics and Mathematics of the Universe (Kavli IPMU). The COSMOS team wants to find the answers. COSMOS's research is designed to examine the role of the environment of large-scale structures on the formation and evolution of galaxies with cosmic time. Determining whether the individual properties of galaxies, such as their rate of growth, are connected to the larger-scale environment catapults us into discovering what factors in the early Universe have shaped the current form of local galaxies. One part of that investigation is carrying out an intensive program of research using FMOS on the Subaru Telescope to map the distribution of over 1000 galaxies when the Universe was maximally forming its stars over nine billion years ago.

"One key to generating fruitful results is collaboration between COSMOS researchers to maximize optimal use of FMOS". Silverman continues, "In this project, researchers from Kavli IPMU in Japan and the Institute for Astronomy (IfA) at the University of Hawaii formed an effective collaboration to implement their goal." The observations spanned 10 clear nights starting in March 2012.

Another important key to making their ambitious goal a reality is the advanced technology that FMOS offers to researchers. FMOS is a fiber-fed, near-infrared spectrograph that can acquire spectra from 400 galaxies simultaneously with a wide field of coverage of 30 arc minutes at prime-focus. Being able to capture so many objects in such a wide field of view is useful for a range of purposes: from studying galaxy evolution and variation with the galaxy environment to investigating star-forming regions, cluster formation, and cosmology. FMOS provides unprecedented views of the distant Universe by using fiber optic cables to collect the light of multiple objects over an area of the sky equal to that spanned by our Moon and also by using a built-in filter to remove unwanted bright emissions from the warm night sky.

As David Sanders, the principal investigator of the FMOS-COSMOS project at IfA put it, "FMOS has clearly revolutionized our ability to study how galaxies form and evolve across cosmic time. It is currently the most powerful instrument we have to study the large numbers of objects needed to understand galaxies of all sizes, shapes and masses -- from the largest ellipticals to the smallest dwarfs. We are extremely fortunate that the Kavli IPMU-IfA collaboration is giving us this unique opportunity to study the distant universe in such exquisite detail."

FMOS has now been operating in a high spectral resolution mode, and its highly successful rate of detection is testimony to the realization of the instrument's full potential. Figure 1 displays the emission lines from a single FMOS pointing, which detected the following chemical species from the interstellar medium of high-redshift galaxies: hydrogen: Hα and Hβ, nitrogen: [NII], and oxygen: [OIII]. These so-called "spectral signatures" provide a measure of the distance to the galaxy (i.e., its redshift). The ratio of the intensity of Hβ relative to Hα provides a measure of obscuring dust. The strength of the emission lines indicates the rate at which stars are forming while the ratio of [Nll] relative to Hα is indicative of the level of chemical enrichment of the interstellar medium (i.e., metallicity). 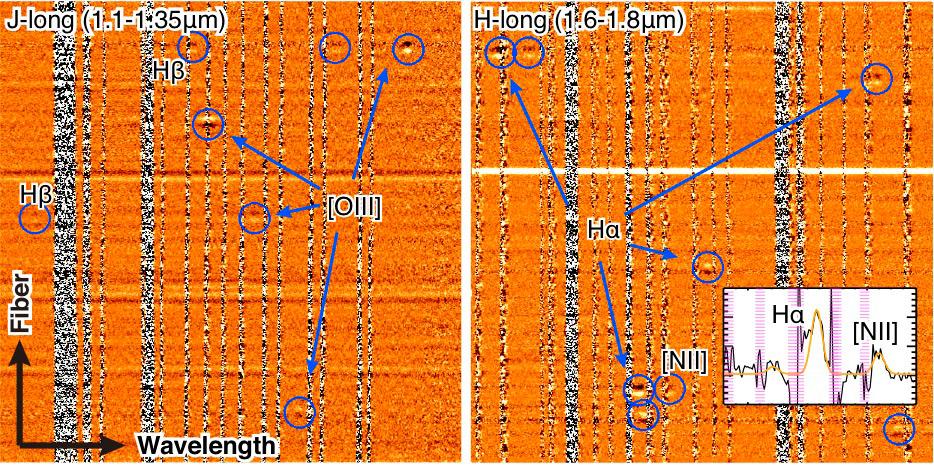 Figure 1: FMOS spectra in the J-band (left panel) and H-band (right panel), each of which filters light so that only specific wavelengths can pass through. The horizontal axis refers to the wavelength direction while the vertical axis indicates individual spectra observed through each fiber. Small blue circles indicate the detection of emission lines (left: Hβ and [OIII]; right: Hα, [NII]). The inset box shows the intensity of the emission lines for one galaxy. The vertical bands indicate the masked regions where bright sky (OH) emissions are prevented from entering science fibers placed on high-redshift galaxies. (Credit: FMOS-COSMOS team)

The FMOS-COSMOS survey is the largest near-infrared spectroscopic survey of galaxies at high spectral resolution and high redshift yet to be undertaken. Early scientific results include the following:
1) Galaxy growth and a star-forming 'main sequence'. There is a highly ordered, general decline in the rate at which galaxies form stars over cosmic time. The FMOS observations shown in Figure 2 confirm that the rate of star formation varies with the total mass of stars available. Although this relationship was first seen locally, this research shows that star formation not only persisted in early epochs but also that its rates of star formation were 20 times higher then! The star formation rate increases with a look-back time out to a corresponding redshift of z~1.6. "While this has been observed using other indicators (ultraviolet or infrared) at high redshift," says Daichi Kashino (Nagoya University) who led the study of the star formation rates, "FMOS's detection of the Hα emission line in the near infrared provides a consistent way to measure star formation in the early Universe and compare it with that of local galaxies."
2) Early dust formation and chemical enrichment. The galaxies observed with FMOS have significantly lower levels of chemical enrichment of gas in their interstellar medium than galaxies of the same mass in the local Universe near us. This finding agrees with a portrait of galaxies that have room to grow and are accreting pristine gas that fuels their intense star formation. Larger amounts of dust and metal content indicate that the more massive galaxies at z~1.6 have evolved more fully and are similar to fully-mature local galaxies that have stopped star formation. 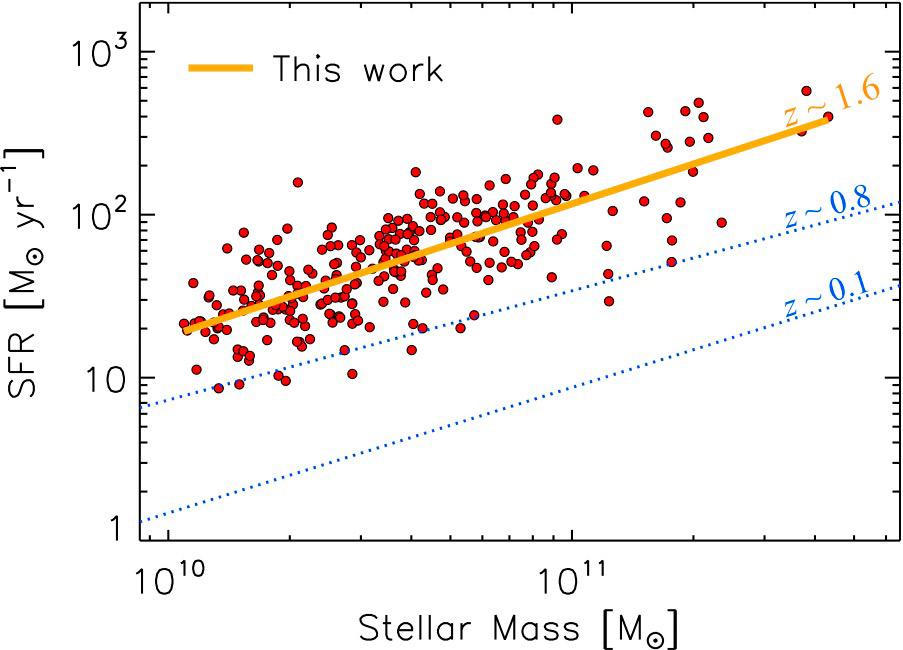 Figure 2: Rates at which new stars are forming in galaxies with a given total stellar mass. The galaxies observed with FMOS are shown in red. The y-axis shows the number of units of solar masses formed in a year. Star formation rates show a clear increase with mass, reaching over 500 M☉ per. As the age of the Universe increases, star formation decreases uniformly across the population. (Credit: FMOS-COSMOS team)

The FMOS-COSMOS survey has reached the halfway mark towards completing its goals of having over 1000 galaxies with redshifts to map the large-scale structure. While the current survey spans a sky area of one square degree in high-resolution mode, future efforts with FMOS may expand the areal coverage and complement instruments at other telescopes, which have wider spectral coverage or deeper penetrating power but are limited by a small area of coverage. Such complementarity may allow FMOS to detect the first structures (i.e., sites of higher than average density of galaxies) that likely evolved into the massive clusters that we see today.