A team of astronomers from the National Astronomical Observatory of Japan and the University of Hyogo used the Subaru Prime Focus Camera (Suprime-Cam) mounted on the Subaru Telescope to observe faint asteroids with highly inclined orbits. They found that a smaller fraction of tiny bodies occur among high-inclination asteroids than those near the ecliptic plane. This means that large asteroids in high-velocity collisions between asteroids probably have a greater increase of strength in resisting disruption than those in the present mean-velocity collisions. Clarification of the relationship between collisional velocity and asteroids' disruptive strength is helpful in understanding the collisional evolution of asteroids in the early Solar System.

Asteroids, small rocky or metallic objects that mostly orbit in the zone between Mars and Jupiter (i.e., the main asteroid belt or MAB), continuously collide with one another after their formation. A so-called "catastrophic collision", when objects suddenly hit each other with great force and incur significant damage, alters asteroids, the fragments of which become newly-born asteroids. Collisional evolution refers to changes in the size and number of asteroids as collisions repeat over time. Asteroids of a certain size decrease, because larger-bodied objects may fragment after catastrophic collisions. The primary factor controlling the balance between the increase and decrease in the size and number of asteroids through continuous collisions is the asteroid's material strength against impacts. The strength of asteroids larger than about 100 meters in diameter increases with size, because gravity holds such larger objects together in a process called "gravitational binding." The population distribution of asteroids results from how much their strength against collisions increases in relation to their size. Therefore, measurements of their population distribution indicate properties of asteroids' strength and provide information necessary for investigating the collisional history of the asteroid belt.

Previous observations of asteroids' population distribution supply the data to model their collisional evolution. However, astronomers know very little about the early collisional evolution in the main asteroid belt, because newborn Jupiter scattered the orbits of asteroids and sped up their relative velocities so that they were colliding with each other at a much faster rate than at present. How, then, can astronomers learn more about the strength properties of asteroids that collide at such high velocities and are not orbiting in similar, nearly circular orbits along the ecliptic plane, i.e., a reference plane based on Earth's orbit projected in all directions?

To address this question, the current team of astronomers focused their research on the population distribution of asteroids with highly inclined orbits, because their collisional velocities are significantly high and can provide information about their strength properties under high-velocity collisions. No previous observations have measured the population distribution of high-inclination asteroids in the desirable range of several hundred meters to several kilometers. Therefore, the team decided to use Suprime-Cam mounted on the 8.2-m Subaru Telescope to conduct an optical wide-field observation of small, main-belt asteroids with high inclinations. Suprime-Cam's position at prime focus combines with Subaru's large primary mirror to provide a particularly wide field of view, which is ideal for targeting such faint and sparsely-populated asteroids. To observe a sufficient number of these objects within a limited amount of time, the team developed a new, efficient asteroid detection technique (Figure 1) and decided to survey a sky area at high ecliptic latitudes, where high-inclination asteroids are likely to be located.

Figure 1: (Left and Center) Optical images from the Subaru Telescope's Suprime-Cam, obtained in the same field at 20-minute intervals on August 24, 2008. (Right) Processed image from the two optical images. Only the moving asteroid remains after the background stars and galaxies were masked. It appears to be elongated, because it moved during the 4-minute exposures. (Credit: NAOJ)

During their two nights of observations, they detected 441 moving objects, about 380 of which are main-belt asteroids. Since the diameters of these asteroids are too small to measure directly, the team calculated their size from their estimated orbits and brightness and found that the detected asteroids have diameters ranging from about 700 meters to 6 kilometers. Almost half of the asteroids have diameters smaller than 1 kilometer with inclinations higher than 15 degrees.

Figure 2 shows the population distribution obtained from the asteroid sample. The slope of the distribution changes sharply when the asteroids are about one kilometer in diameter--the same pattern that a previous study confirmed in asteroids near the ecliptic plane. A careful comparison of the population distribution of asteroids with diameters ranging from 600 meters to 5 kilometers with that of asteroids near the ecliptic plane revealed that high-inclination asteroids have a smaller proportion of small to large objects (i.e., a shallower population distribution). This finding indicates that high-velocity collisions accelerate the rate of increase in the strength of asteroids according to their size, i.e., properties of asteroid disruptive strength depend on collisional velocity. In terms of collisional evolution, the results of this study indicate that in the early Solar System when Jupiter's birth triggered collisions of asteroids at higher velocities than now, large asteroids were more resistant to disruption and had longer lifespans than those in typical, present-day collisions. The team plans to use Hyper Suprime-Cam (HSC), Subaru Telescope's powerful new prime-focus camera (Hyper Suprime-Cam Ushers in a New Era of Observational Astronomy), to conduct large-scale surveys to further investigate the dynamical/collisional evolution of various small-bodied populations in the Solar System. 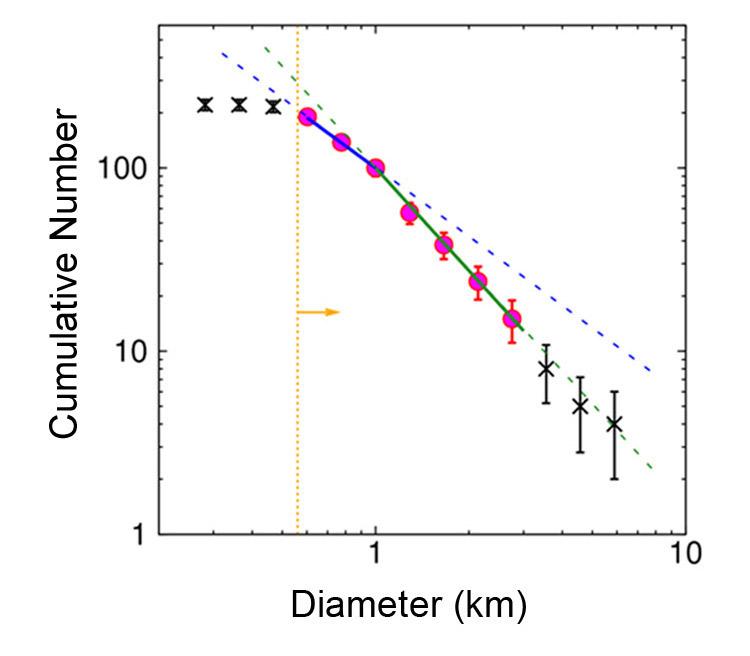 Figure 2: Relationship between the diameter and cumulative number of bodies larger than the size obtained from the observed asteroids. The orange dotted line shows the detection limit for asteroids. The red circles show the diameter range used for evaluation of the distribution slope, which indicates the asteroid population. The crosses show the excluded range. The slope changes at one kilometer, a shift that asteroids near the ecliptic plane also show. The blue and green lines show the estimated slope of asteroids in diameter ranges smaller and larger than one kilometer, respectively. The former provides a basis for comparison with that of asteroids smaller than one kilometer near the ecliptic plane. A difference between the slopes of near and far ecliptic populations indicates that the collisional evolutions were different. (Credit: NAOJ)