A Japanese research team of astronomers and planetary scientists has used Subaru Telescope's two optical cameras, Suprime-Cam and the Faint Object Camera and Spectrograph (FOCAS), with a blue transmission filter to observe planetary transits of super-Earth GJ 1214 b (Gilese 1214 b) (Figure 1). The team investigated whether this planet has an atmosphere rich in water or hydrogen. The Subaru observations show that the sky of this planet does not show a strong Rayleigh scattering feature, which a cloudless hydrogen-dominated atmosphere would predict. When combined with the findings of previous observations in other colors, this new observational result implies that GJ 1214 b is likely to have a water-rich atmosphere. 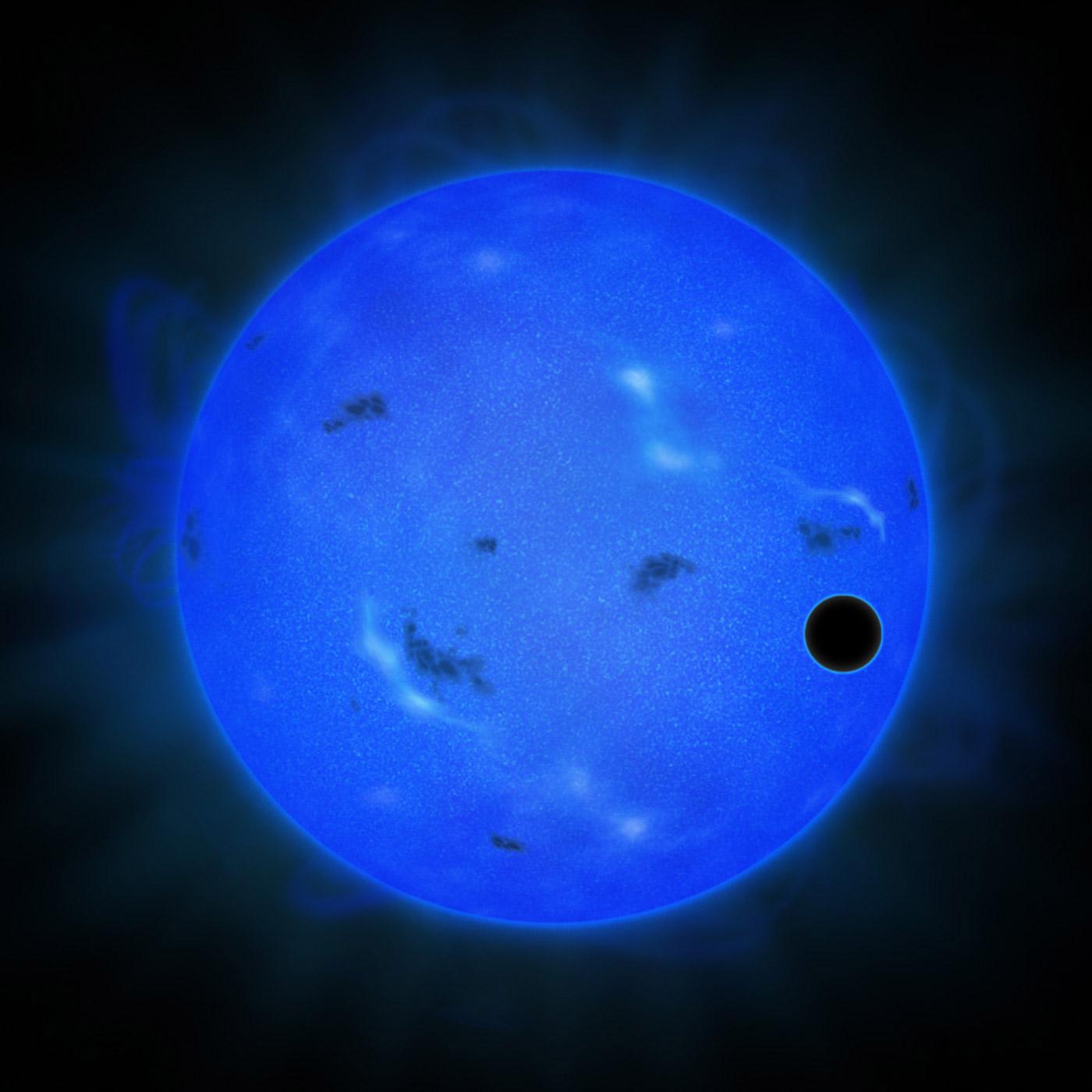 Super-Earths are emerging as a new type of exoplanet (i.e., a planet orbiting a star outside of our Solar System) with a mass and radius larger than the Earth's but less than those of ice giants in our Solar System, such as Uranus or Neptune. Whether super-Earths are more like a "large Earth" or a "small Uranus" is unknown, since scientists have yet to determine their detailed properties. The current Japanese research team of astronomers and planetary scientists focused their efforts on investigating the atmospheric features of one super-Earth, GJ 1214 b, which is located 40 light years from Earth in the constellation Ophiuchus, northwest of the center of our Milky Way galaxy. This planet is one of the well-known super-Earths discovered by Charbonneau et. al. (2009) in the MEarth Project, which focuses on finding habitable planets around nearby small stars. The current team's research examined features of light scattering of GJ 1214 b's transit around its star.

Current theory posits that a planet develops in a disk of dense gas surrounding a newly formed star (i.e., a protoplanetary disk). The element hydrogen is a major component of a protoplanetary disk, and water ice is abundant in an outer region beyond a so-called "snow line." Findings about where super-Earths have formed and how they have migrated to their current orbits point to the prediction that hydrogen or water vapor is a major atmospheric component of a super-Earth. If scientists can determine the major atmospheric component of a super-Earth, they can then infer the planet's birthplace and formation history.

The current team used the two optical cameras Suprime-Cam and FOCAS on the Subaru Telescope fitted with a blue transmission filter to search for the Rayleigh scattering feature of GJ 1214 b's atmosphere. This planetary system's very faint host star in blue light poses a challenge for researchers seeking to determine whether or not the planet's atmosphere has strong Rayleigh scattering. The large, powerful light-collecting 8.2 m mirror of the Subaru Telescope allowed the team to achieve the highest-ever sensitivity in the bluest region.

The team's observations showed that GJ 1214 b's atmosphere does not display strong Rayleigh scattering. This finding implies that the planet has a water-rich or a hydrogen-dominated atmosphere with extensive clouds. (Figure 2). 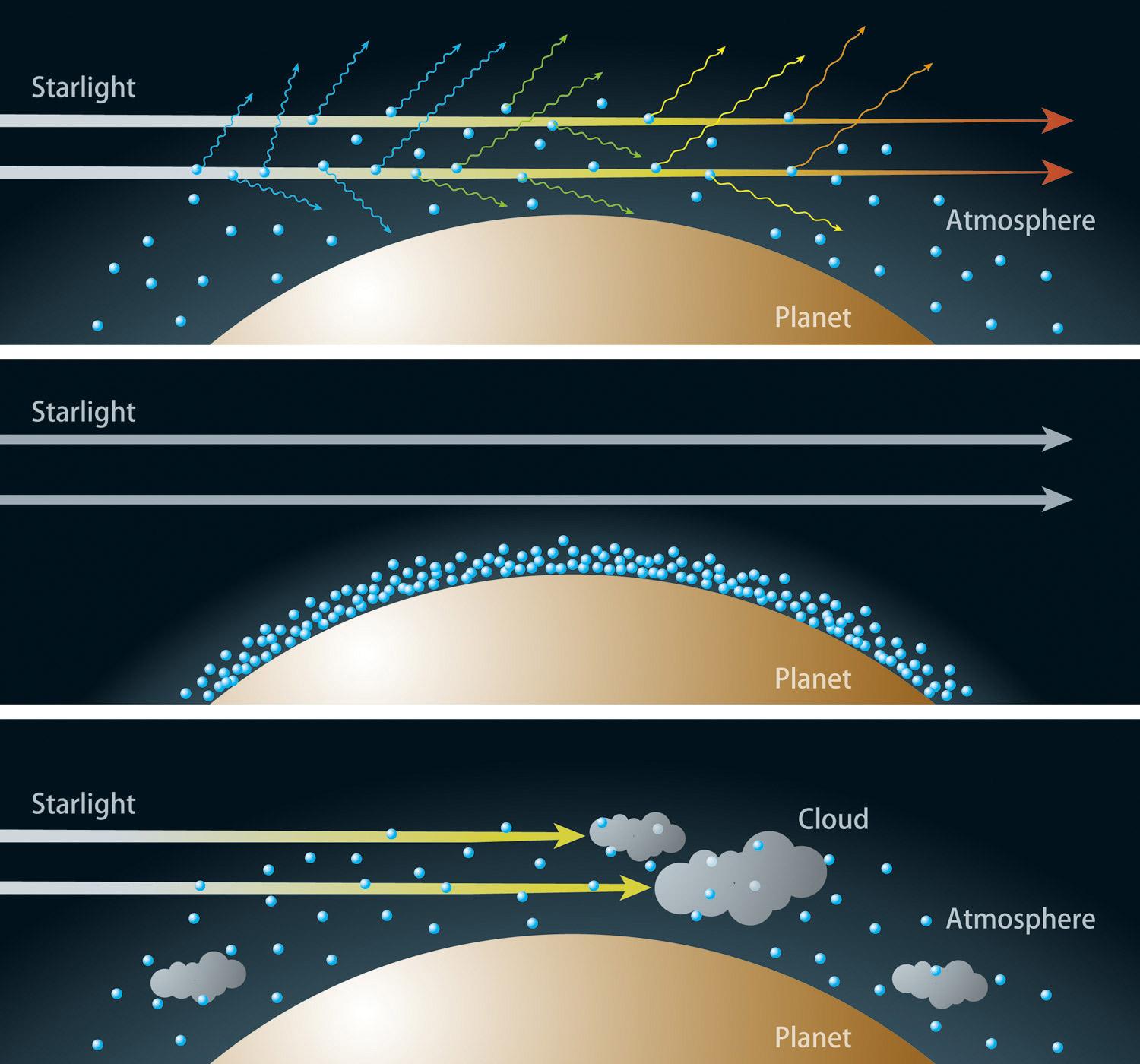 Although the team did not completely discount the possibility of a hydrogen-dominated atmosphere, the new observational result combined with findings from previous research in other colors suggests that GJ 1214 b is likely to have a water-rich atmosphere (Figure 3). The team plans to conduct follow-up observations in the near future to reinforce their conclusion. 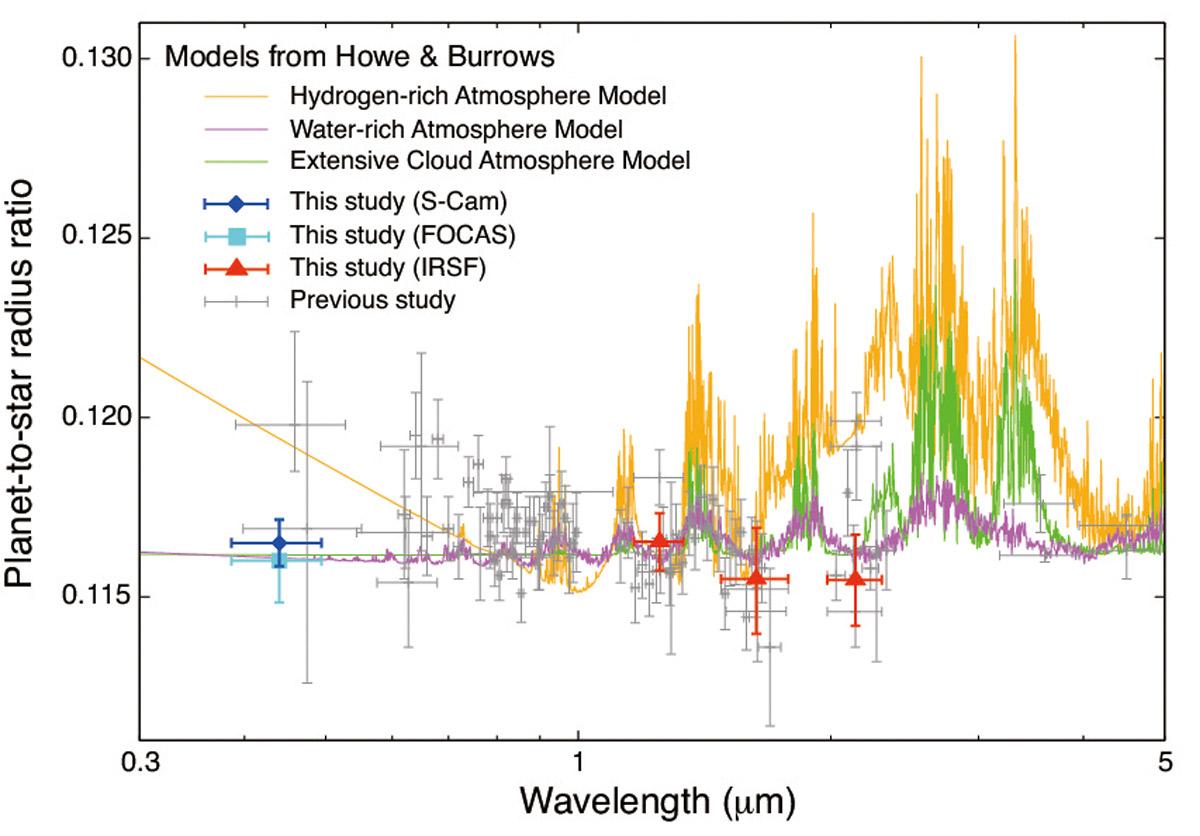 Although there are only a small number of super-Earths that scientists can observe in the sky now, this situation will dramatically change when the Transiting Exoplanet Survey Satellite (TESS) begins its whole sky survey of small transiting exoplanets in our solar neighborhood. When new targets become available, scientists can study the atmospheres of many super-Earths with the Subaru Telescope and next generation, large telescopes such as the Thirty Meter Telescope (TMT). Such observations will allow scientists to learn even more about the nature of various super-Earths.

This research was supported in part by the following: