A Fluffy Disk Around a Baby Star

An international team of astronomers that are members of the Strategic Exploration of Exoplanets and Disks with Subaru Telescope (SEEDS) Project has used Subaru Telescope's High Contrast Instrument for the Subaru Next Generation Adaptive Optics (HiCIAO) to observe a disk around the young star RY Tau (Tauri). The team's analysis of the disk shows that a "fluffy" layer above it is responsible for the scattered light observed in the infrared image. Detailed comparisons with computer simulations of scattered light from the disk reveal that this layer appears to be a remnant of material from an earlier phase of stellar and disk development, when dust and gas were falling onto the disk. 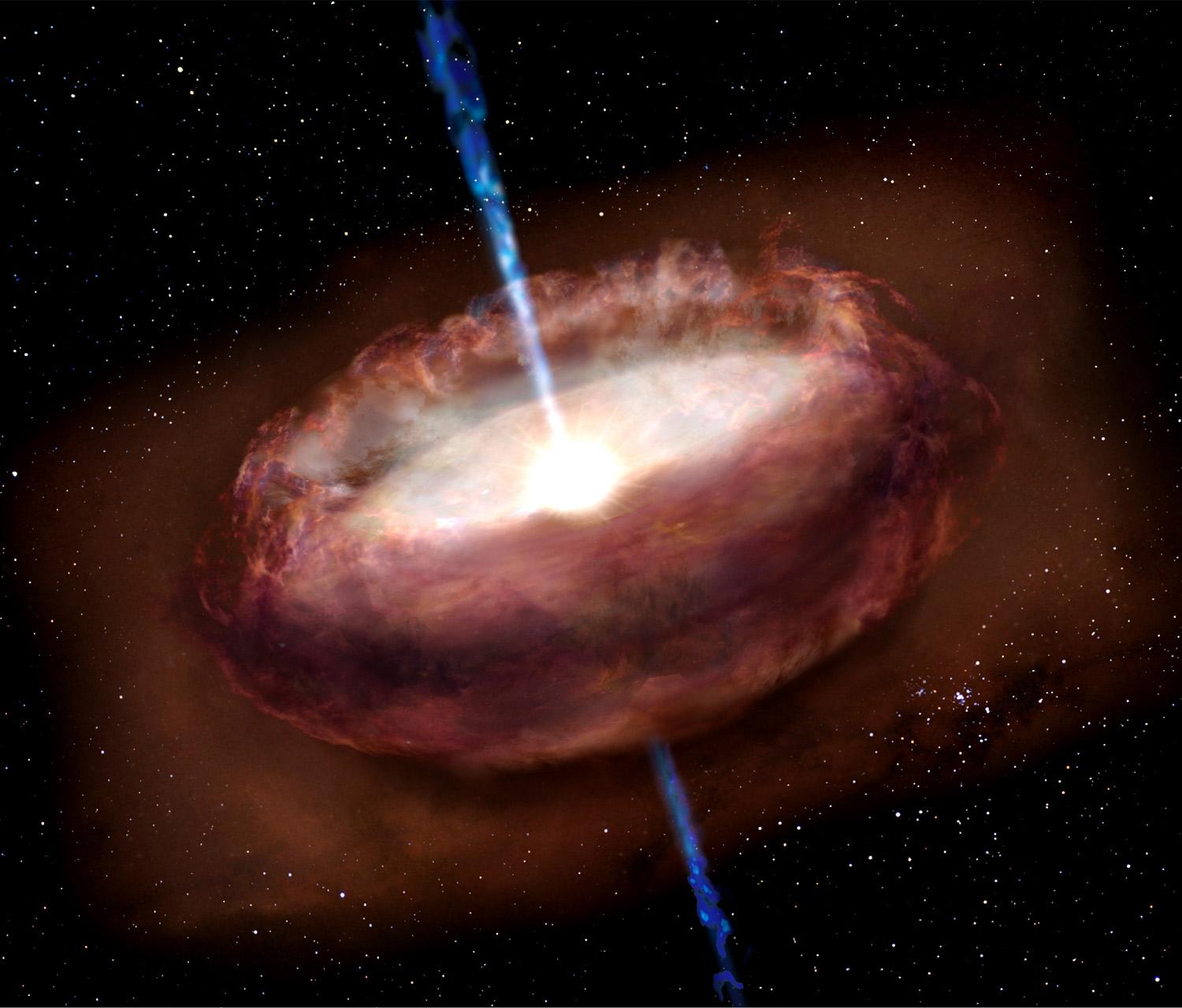 Figure 1: Artist’s rendition of the "fluffy" layer associated with the protoplanetary disk of RY Tau, including jets coming from the star. Although typical young stars like RY Tau are often associated with jets, they are not visible in the HiCIAO observations at this time. (Credit: NAOJ)

Since 2009, the five-year SEEDS Project (Note) has focused on direct imaging of exoplanets, i.e., planets orbiting stars outside of our Solar System, and disks around a targeted total of 500 stars. Planet formation, an exciting and active area for astronomical research, has long fascinated many scientists. Disks of dust and gas that rotate around young stars are of particular interest, because astronomers think that these are the sites where planets form--in these so-called "protoplanetary disks." Since young stars and disks are born in molecular clouds, giant clouds of dust and gas, the role of dust becomes an important feature of understanding planet formation; it relates not only to the formation of rocky, Earth-like planets and the cores of giant Jupiter-like planets but also to that of moons, planetary rings, comets, and asteroids.

As a part of the SEEDS Project, the current team of researchers used HiCIAO mounted on the Subaru Telescope to observe a possible planet-forming disk around the young star RY Tau. This star is about 460 light years away from Earth in the constellation Taurus and is around half a million years old. The disk has a radius of about 70 AU (10 billion kilometers), which is a few times larger than the orbit of Neptune in our own Solar System.

Astronomers have developed powerful instruments to obtain images of protoplanetary disks, and Subaru Telescope's HiCIAO is one of them. HiCIAO uses a mask to block out the light of the central star, which may be a million times brighter than its disk. They can then observe light from the star that has been reflected from the surface of the disk. The scattered light will reveal the structure of the surface of the disk, which is very small in scale and difficult to observe, even with large telescopes. Observers use HiCIAO with a 188 element adaptive optics system to reduce the blurring effects of the Earthʼs atmosphere, making the images significantly sharper.

This team succeeded in capturing a near-infrared image (1.65 μm) associated with the RY Tau disk. Unlike many other protoplanetary disks, the disk emission is offset from the centre of the star (Figure 2, left). In contrast to longer wavelength observations, which are associated with the midplane of the disk, near-infrared, scattered light coming from the surface of the disk produced this offset (Figure 2, right), which provides information about the vertical structure of the disk.

Figure 2: (left) An image in the near infrared (1.65 μm) around RY Tau, using a special mode of the HiCIAO coronagraph, the polarized intensity image. This type of observation is preferred for faint emissions associated with scattered light around planet-forming disks, as there is less light from the much brighter star. The colors indicate the strength of the emission (blue, yellow and red from faint to bright). A coronagraphic mask in the telescope optics blocks the central star, with its position marked at the center. A white ellipse shows the position of the midplane of the disk, which is observed at millimeter wavelengths. Scattered light observed in the near infrared is offset to the top of the image compared with the denser millimeter disk. (right) Schematic view of the observed infrared light. The light from the star is scattered in the upper dust layer, and it makes the observed light offset from the midplane. (Credit: NAOJ)

Changes in structure perpendicular to the surface of a disk are much harder to investigate because there are few good examples to study. Therefore, the information about vertical structure that this image provides is a contribution to understanding the formation of planets, which depends strongly on the structure of the disk, including structures such as spirals and rings, as well as height. 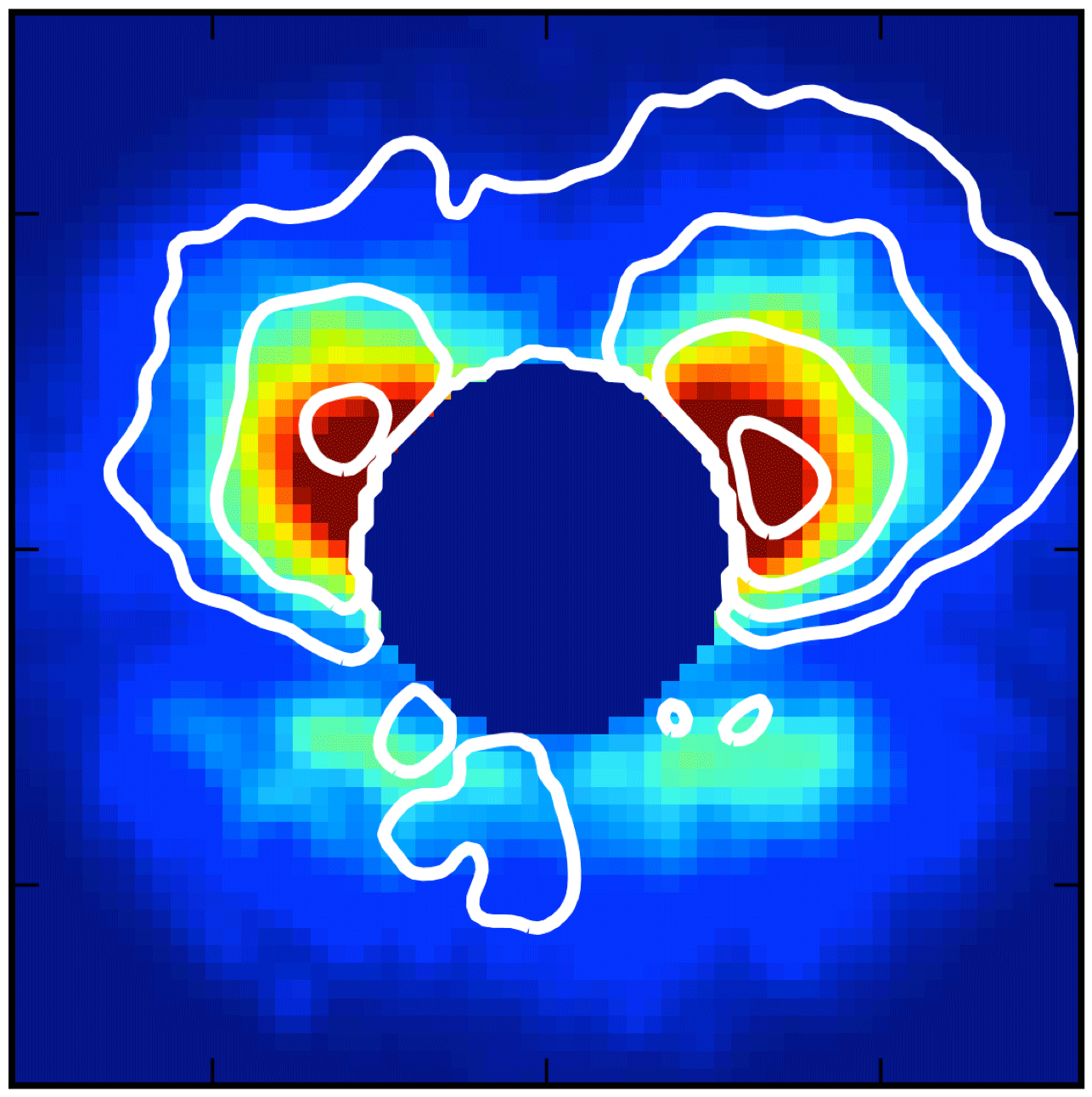 Figure 3: Computer simulation for dust scattering for RY Tau. The color indicates the strength of the modeled flux (blue, yellow and red for faint to bright). The white contours show the image observed using Subaru Telescope's HiCIAO. This modeled disk has a disk with a fluffy layer and closely matches the image in shape and brightness. (Credit: NAOJ)

The team performed extensive computer simulations of the scattered light, for disks with different masses, shapes, and types of dust (Figure 3). They found that the scattered light is probably not associated with the main surface of the disk, which is the usual explanation for the scattered light image (Figure 4a). Instead, the observed infrared emission can be explained if the emission is associated with a fluffy upper layer, which is almost transparent and not completely transparent (Figure 4b). The team estimated the dust mass in this layer to be about half the mass of Earthʼs Moon. 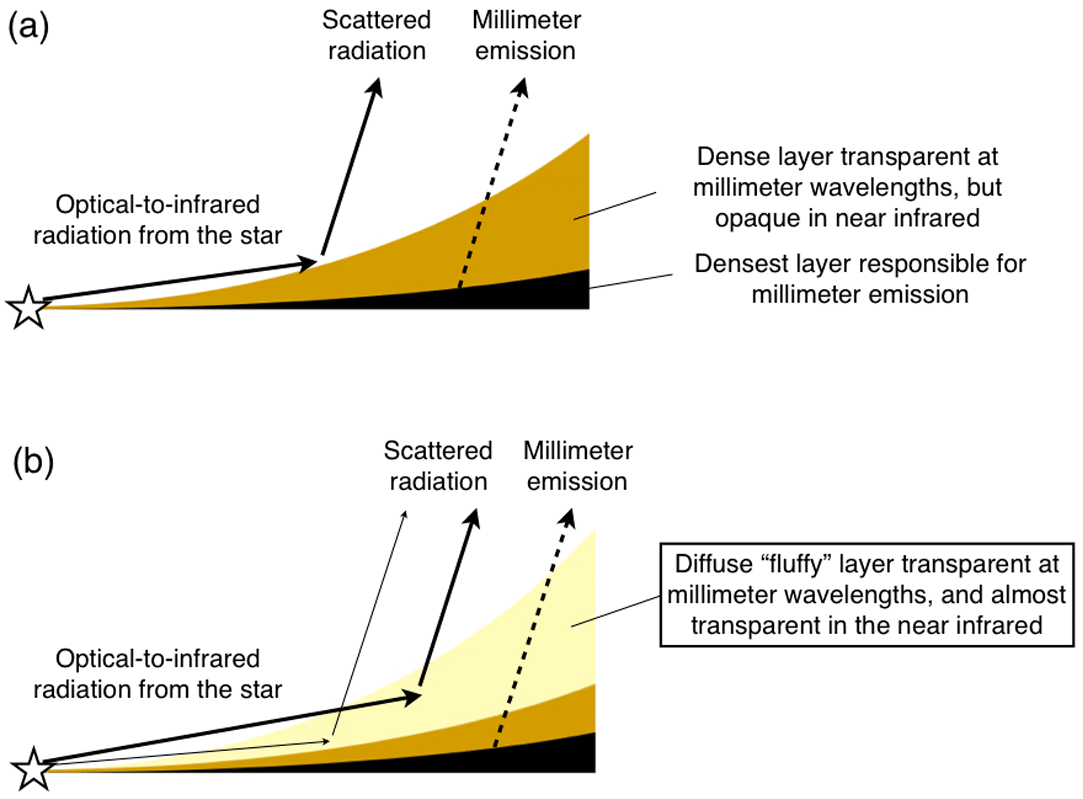 Figure 4: Schematic views of the structure of the protoplanetary disk. The disk is transparent at millimeter wavelengths, and as a result, the observed millimeter emission is associated with the densest region (the midplane). In contrast, the disk is opaque in the infrared in even at the upper layer. Researchers often assume that the near-infrared emission is due to scattered light from its surface like figure (a). Figure (b) shows the revised schematic view through this study for RY Tau. There is another layer above the two layers in (a). This layer is almost transparent in the near-infrared, but not completely. The team concludes that the scattered emission observed using Subaru Telescope's HiCIAO is mainly due to scattering in this layer. (Credit: NAOJ)

Why is this fluffy layer observed in this disk, but not in many other possible planet-forming disks? The team suspects that this layer is a remnant of the dust that fell onto the star and the disk during earlier stages of formation. In most stars, unlike RY Tau, this layer dissipates by this stage in the formation of the star, but RY Tau may still have it because of its youth. It may act as a special comforter to warm the inside of the disk for baby planets being born there. This may affect the number, size, and composition of the planets being born in this system.

The Atacama Large Millimeter/Submillimeter Array (ALMA), a superb international millimeter/submillimeter telescope, will soon be making extensive observations of protoplanetary disks, which will allow scientists to directly observe ongoing planet formation in the midplane of a disk. By comparing SEEDS and ALMA observations scientists may be able to understand the details of how planets form, something that has raised fascinating questions for centuries.

The SEEDS Project began in 2009 for a five-year period, using 120 observing nights at Subaru Telescope, located at the summit of Mauna Kea on the island of Hawaii. The goal of the project is to explore hundreds of nearby stars in an effort to directly image extrasolar planets and protoplanetary/debris disks that surround less massive stars like the Sun. Principal investigator Motohide Tamura (University of Tokyo and NAOJ) leads the project.

This research was supported in part by the following: