A team of astronomers led by Jose Dias do Nascimento (Department of Theoretical and Experimental Physics, Universidade Federal do Rio Grande do Norte [DFTE, UFRN], Brazil) has found the farthest known solar twin in the Milky Way Galaxy-- CoRoT Sol 1, which has about the same mass and chemical composition as the Sun. Spectra from the High Dispersion Spectrograph (HDS) on the Subaru Telescope showed that CoRoT Sol 1 is about 6.7 billion years old while space-based data from the CoRoT (Convection, Rotation and planetary Transits) satellite indicated a rotation period of 29 +/- 5 days. This newly discovered, evolved solar twin allows astronomers to uncover the near future of our solar system's central star--the Sun.

Since the Sun is the closest star to Earth, it has been extensively studied in a variety of ways. Despite considerable efforts by astronomers, we do not know yet how typical a star the Sun is. Except for the youngest stars, the true rotation of those similar to the Sun is unknown, and there are few studies of mature solar twins or of more evolved ones.

The mass (the amount of matter) and chemical composition of a star are the main characteristics that determine its evolution. Studying stars with the same mass and composition as the Sun, the so-called "solar twins", can give us more information about our own Sun; solar twins of various ages offer snapshots of the Sun's evolution at different phases (Figure 1). 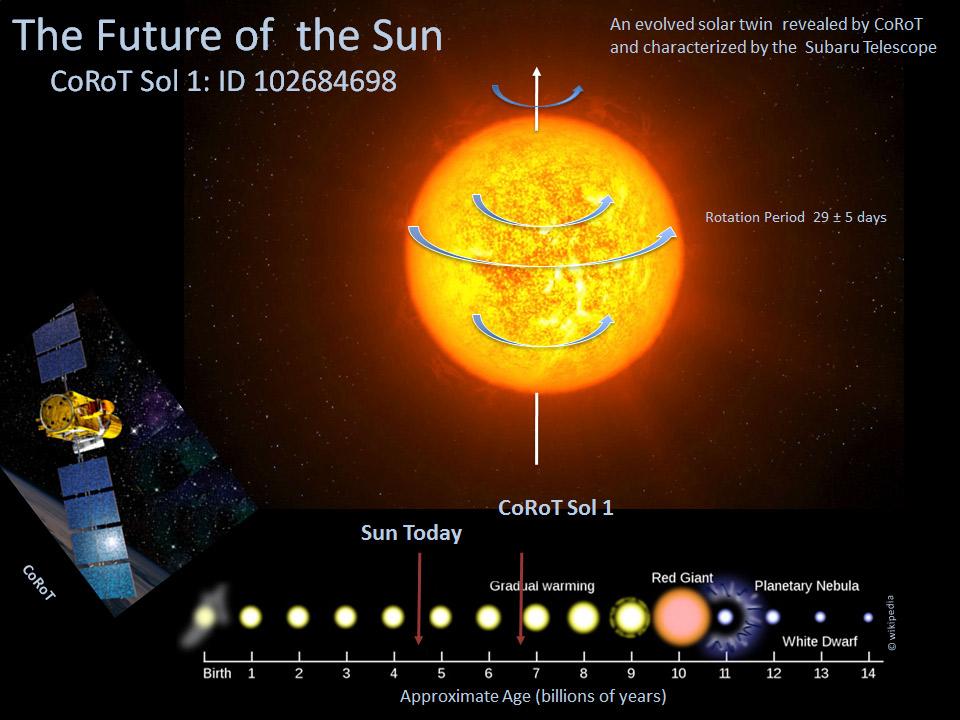 Figure 1: Artist's rendering of CoRoT Sol 1 and a chronology of the Sun's evolution based on data from the Subaru Telescope and the CoRoT space mission. The illustration indicates how CoRoT Sol 1's discovery will greatly improve our understanding of how the Sun may evolve and allows astronomers to test current theories of solar evolution against an observed, evolved solar twin. (Credit: do Nascimento et al.)

The satellite CoRoT (Convection, Rotation and planetary Transits, [note]) has provided precise space-based data from which it is possible to determine the rotation periods of stars. The current team selected the best solar twin candidates within a range of rotation periods to study the evolution of the Sun's rotation period in detail. Because solar twins are faint, the team initially used the High Dispersion Spectrograph (HDS) on the Subaru Telescope to observe three of their solar twin candidates. The large size of the Subaru Telescope and the capability of HDS to precisely spread out the stellar light into many constituent colors allowed them to study the stars' characteristics in detail. A meticulous analysis of the data showed that one of the solar twin candidates was truly a star with a mass and chemical composition similar to that of the Sun. The finding was even more precious, because the star is at a more evolved stage and can serve as an indicator of the future of the Sun.

Determining the age of a star is probably one of its most difficult aspects to ascertain, but high quality spectra shed light on stellar ages. CoRoT Sol 1 is about two billion years older than the Sun, but its rotation period is about the same as the Sun's. Subaru Telescope's HDS spectra of CoRoT Sol 1 show that its overall chemical composition is similar to that of the Sun, but its detailed abundance pattern shows some differences, like most nearby solar twins (Figure 2). For example, the abundance of lithium (Li), an element that decreases with age, is less than that of the Sun.

Figure 2: Spectra for CoRoT Sol1 from Subaru Telescope's HDS compared with the Sun's spectra, highlighting the lithium feature (Li I 6707.8 A). The superimposed spectrum of the Sun is shown with open circles, while the CoRoT Sol 1 spectrum is shown with the solid red line. The jagged red line at the bottom of the figure represents the differences between the spectra of the Sun and the solar twin. (Credit: do Nascimento et al.)

Team leader Dr. Jose Dias do Nascimento commented on the significance of CoRoT Sol 1's age for understanding the Sun's future: "In two billion years' time, about the solar twin's actual age, the Sun's radiation may increase and make the Earth's surface so hot that liquid water can no longer exist there in its natural state."

In contrast to other solar twins that are relatively bright, CoRoT Sol 1, which is located in the constellation Unicorn (Monoceros), is more than 200 times fainter than the brightest solar twin known. The large 8.2 m mirror of the Subaru Telescope and the precision of its high dispersion spectrograph made it possible to conduct this detailed study of the spectra of such a faint star. The team plans to use the Subaru Telescope to continue its research on how typical a star the Sun is; they intend to describe its rotation evolution by finding solar twins representing a broad range of stellar ages and then placing the Sun within this context.

CoRoT is the Convection, Rotation and planetary Transits space mission, which was launched on December 27, 2006. It is operated by the Centre national d'études spatiales (CNES) with the participation of science programs of European Space Agency (ESA), ESA's Research and Science Support Department (ESA-RSSD), Austria, Belgium, Brazil, Germany, and Spain.

The research paper entitled "The Future of the Sun: An Evolved Solar Twin Revealed by CoRoT", on which this article is based, has been accepted and will be published in the Astrophysical Journal Letters (ApJL).
・Related material may be obtained at: http://astro.dfte.ufrn.br/corottwin and http://arxiv.org/abs/1305.3652
・The members of the research team are:
1.J-D do Nascimento, Universidade Federal do Rio Grande do Norte (UFRN)
2.Y. Takeda, National Astronomical Observatory of Japan (NAOJ)
3.J. Meléndez, University of São Paulo, Brazil
4.J.S. da Costa, UFRN, Brazil
5.G. F. Porto de Mello, Observatorio do Valongo of the UFRJ, Brazil
6.M. Castro, UFRN, Brazil