In a course of studying young galaxies at a distance of 11.6 billion light years from Earth, a team of astronomers led by Professor Yoshiaki Taniguchi (Ehime University) noticed a strangely shaped galaxy that looks like a "magatama", an ancient, comma-shaped Japanese amulet made of stone (Figure 1). Subsequent research revealed that the magatama galaxy was actually an overlapping system of two young galaxies lying in an extremely close line of sight--an exceedingly rare occurrence among celestial objects. The small angular separation between the foreground and background galaxies gave the current team an opportunity to investigate the effect of gravitational lensing on the properties of the background galaxy. A member of the team, university student Yuya Nakahiro (Ehime University), calculated that the effect of gravitational amplification would be 20% at most. The foreground young galaxy is still forming, and the team concluded that the gravitational lensing effect from such a young galaxy does not affect the luminosity of its background galaxy. 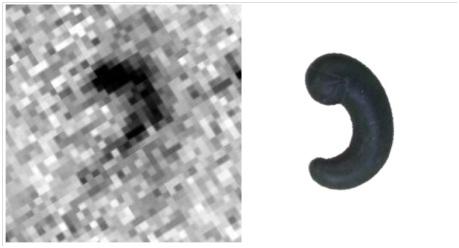 The focus of the team's research was the young galaxy LAE 221724+001716, which lies about 11.6 billion light years from Earth. Team member Dr. Akio Inoue (Osaka Sangyo University) had made observations with the Subaru Telescope's prime focus camera (Suprime-Cam) and identified this galaxy as one of those emitting strong ultraviolet radiation that ionizes hydrogen atoms (Note); it is a Lyman-alpha emitter (LAE) and can provide important clues about the progenitors of Milky-Way type galaxies. Although he noticed that there was a separation between the galaxy itself and the emission point of ionizing radiation, he concluded that this galaxy did not include the effect of any foreground galaxies, given the negligible probability of an overlapping foreground galaxy with such a small separation from its background galaxy. However, another research team using Keck's Low Resolution Imaging Spectrometer (LRIS) found that the radiation, originally interpreted as ionizing radiation from LAE 221724+001716, came from a foreground galaxy located about 9.9 billion light years from Earth. Figure 2 shows the context for the images from the Subaru Telescope and HST in light of this revised interpretation. 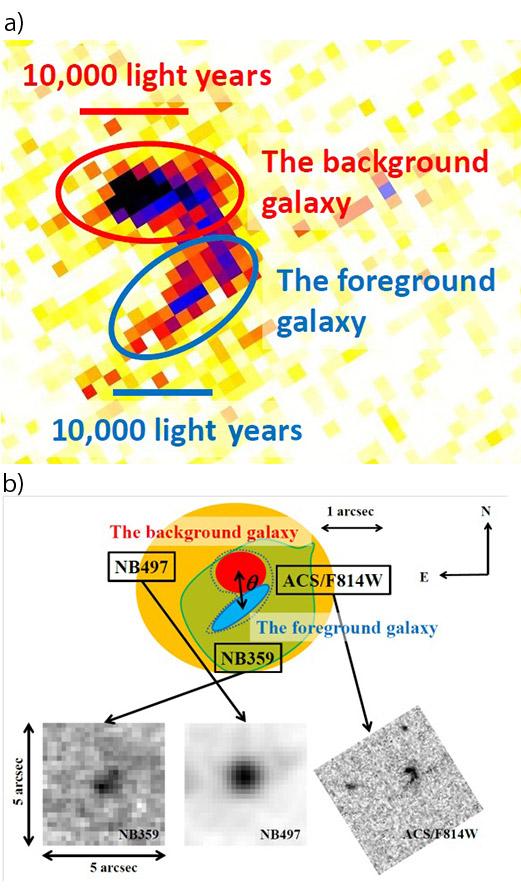 Figure 2: The shape and scale of the galaxies composing the magatama galaxy. a) Reference figure for the physical scales of the foreground and background galaxies. Using the physical scale of 10 kilo light years, the red lines represent the foreground galaxy while the blue lines represent the background galaxy. (Credit: Ehime University) b) The schematic view of LAE 221724+001716's shape (top) and imaging data taken with the Subaru Telescope (bottom left and middle) and the HST (bottom right). While both emissions detected in NB359 and NB497 images were originally thought to come from LAE 221724+001716, later observations revealed that most of the emission in NB359 comes from a foreground galaxy and that two distinct galaxies overlap and lie in an extremely close line of sight in the sky. 1 arcsecond (arcsec) is equal to 1/3600 of arc (part of a curve or circle). (Credit: Ehime University)

Dr. Inoue expressed his surprise at the finding: "This result was very amazing to me, since this is the discovery of an extremely rare system." The finding sparked Professor Taniguchi's idea for the current research: "Soon after I knew this observational result, I became aware of the possibility that light from LAE 221724+001716 is gravitationally amplified by the foreground galaxy".

According to Einstein's Theory of Relativity, when light from an object in the distant universe travels close to a foreground source, it bends and amplifies (or magnifies) the light from the background object (Figure 3). This gravitational lensing effect facilitates the detection of faint objects not originally bright enough for detection. 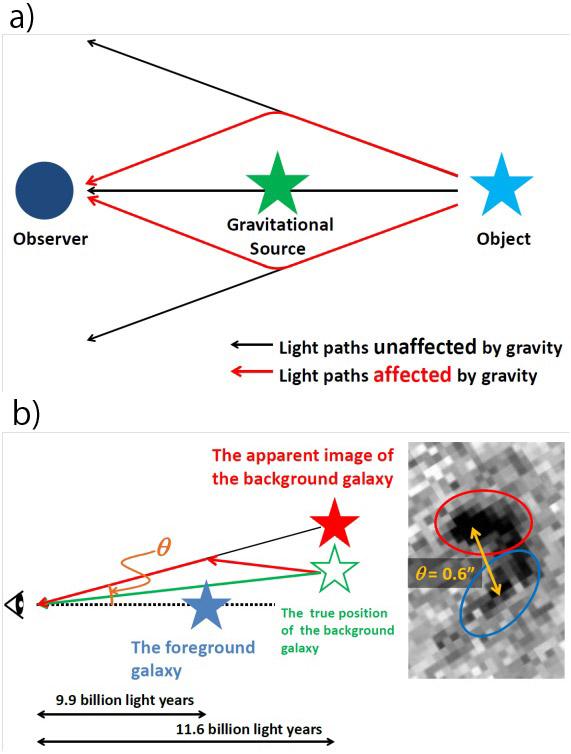 However, it is important to know how large the gravitational amplification is in order to estimate the object's absolute luminosity, which relates to its stellar mass and formation history. Team member Nakahiro performed most of the amplification research as part of his university studies. Using observational data from the Subaru Telescope, the team used three quantities for estimating amplification to evaluate the mass of the foreground galaxy: 1) the distance from Earth to the background galaxy, 2) the distance between the foreground and background galaxies, and 3) the angular separation between the two galaxies.

The team found that the stellar mass of the foreground object was about a billion solar masses, which corresponds to only one percent of our Milky Way's mass (Figure 4).

The estimated stellar mass is rather small among the galaxies in the Universe, and its gravitational amplification is only about 20% at most. The foreground galaxy is still forming, and its stellar mass is increasing. The team concluded that the gravitational lensing effect from such young, forming galaxy does not significantly affect the luminosity of any background galaxies.

Nakahiro looks forward to future research in this area with great enthusiasm: "In this research, we have analyzed the gravitational amplification for only one object. Thus far, we have found similar objects in the literature, so I will evaluate the gravitational lens effects of these objects and tackle the challenging questions of our Universe."

For more information, refer to the February 24, 2009 Subaru Telescope (Science Results) Press Release "Strong UV Radiation Detected in the Most Distant Galaxies". The imaging data of LAE 221724+001716 taken by the Subaru Telescope are shown in the middle-left panel of Figure 3.