An international team of astronomers led by Satoshi Mayama (The Graduate University for Advanced Studies, Japan) and Ruobing Dong (Princeton University, U.S.A.) has made observations with the Subaru Telescope and captured the first vivid infrared image of a curved arm of dust extending over a hole on a disk around a young star--2MASS J16042165-2130284 (J 1604). This feature indicates the probable existence of unseen planets within the hole. The image shows the dynamic environment in which planets may be born and gives information about constraints on the distance at which planets can form from a central star. 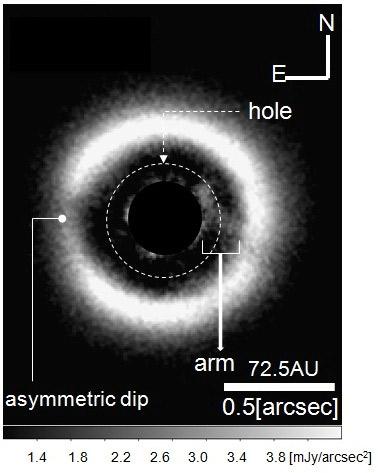 Figure 1: Subaru Telescope's near-infrared (1.6 μm) image of the protoplanetary disk around the young star J 1604. A black circular mask covers the bright, saturated light from the central star. The gauges for distance are in astronomical units and arc seconds. (Abbreviated as AU, an astronomical unit is the distance between the Sun and Earth. Abbreviated as arcsec, an arc second is 1/3600 of a degree.) Prominent features include the hole (white dotted line) in the disk; the arm extending over the hole (on the right); and the asymmetric dip (on the left). Click here for the image without labels. (Credit: The Graduate University for Advanced Studies and the National Astronomical Observatory of Japan)

Research over the past two decades has confirmed that new stars are often surrounded by disks of dense gas and dust ("protoplanetary disks") from which planets form. A central star enters an active phase of planet building when it is a few million years old. During this period, newborn planets may deplete some of the gas and dust in the disk, producing a hole within it, although the outer ring remains. However, the debatable origins of the hole require direct observation to confirm this process. Direct imaging of the structures that indicate planet building inside of the hole have rarely occurred—until now. The current team's research, a part of the Strategic Explorations of Exoplanets and Disks with Subaru (SEEDS) Project (Note 1) is filling in the observational gaps in this relatively unexplored area.

The team used the high-resolution infrared camera HiCIAO (High Contrast Instrument for the Subaru Next Generation Adaptive Optics) mounted on the 8.2-m Subaru Telescope in April 2012 to observe the young star J 1604, which has a mass similar to the Sun's; it is located in the Upper Scorpius star-forming region at a distance of 470 light years and is estimated to be 3.7 million years (Myr) old. The researchers captured a very high-resolution (0.07 arc seconds) near-infrared image of its protoplanetary disk, which shows dust particles that scatter the light from the central star. The disk has some interesting features: a large hole with an asymmetric dip in the disk and a curved arm extending over the hole. This is the first vivid infrared image of such an arm in observations of the disks around young stars, and it also marks the first detection of an arm of dust that could lead to the formation of Earth-like rocky planets (Note 2). The arm emerges from the inner edge of the western side of the disk, begins to extend inward, and then curves to the northeast. Based on their detailed modeling, the team estimates that the radius of the disk's inner edge is 63 AU; its inclination is 10 degrees; and the length of the arm is 50 AU. Their measurements of the surface brightness of the gap show that it drops by a factor of five when compared with the rest of the disk.

Characteristics of the hole in the disk and the arm over it indicate the possible presence of unseen planets within the hole. The width and depth of the observed hole conform to the size of a hole that planets would create according to current theories of planet formation. The researchers' calculations suggest that the hole in this disk might mark the presence of at least one planet at 40 – 50 AU from the central star. Current theories also predict that the gravity of a planet could produce a curved arm in a disk. Because the shape of the arm in the Subaru Telescope image shared features in line theoretical predictions, the team concluded that unseen planets could explain its structure. Overall, these findings identify constraints on planet formation at certain distances from the central star. 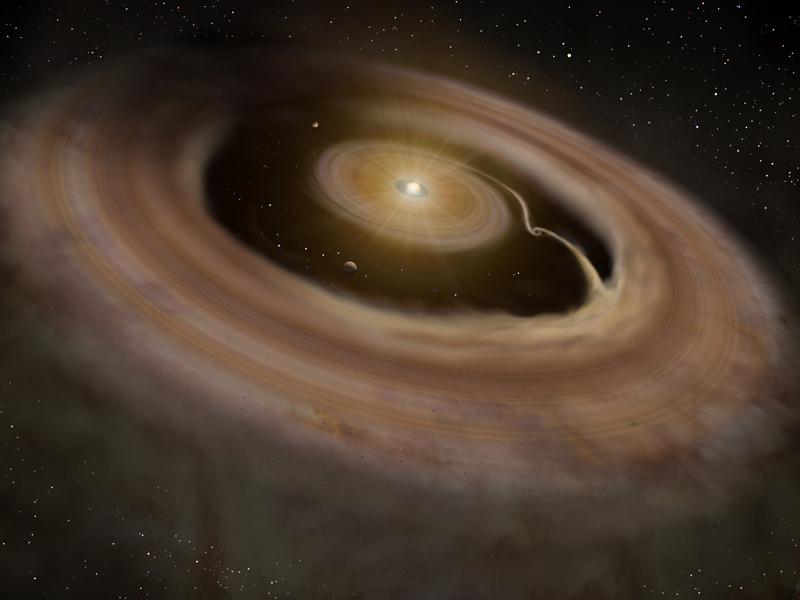 The high-resolution image from these scientists' research at Subaru Telescope clearly illustrates the dynamic context in which planets are born. Providing these kinds of detailed images of a face-on disk object becomes a perfect laboratory for astronomers to test and refine their theoretical models of planet formation.

1.The SEEDS Project begun in 2009 for a five-year period using 120 observing nights at Subaru Telescope, located at the summit of Mauna Kea on the island of Hawaii. The goal of the project is to explore hundreds of nearby stars in an effort to directly image extrasolar planets and protoplanetary/debris disks that surround less massive stars like the Sun. Principal investigator Motohide Tamura (NAOJ) leads the project.

2.A January 2, 2013 article in Nature reported that the ALMA Telescope resolved a submillimeter image of the disk of another object, HD 142527, which showed similar arm-like structures in its disk. However, the image displays streams of gas rather than dust particles flowing across the gap in the disk. These researchers suggest that the arm may indicate the presence of unseen planets, because giant planets may be using the gas as they grow within the disk.