The Origin and Maintenance of a Retrograde Exoplanet

Astronomers have used the Subaru Telescope to show that the HAT-P-7 planetary system, which is about 1040 light years from Earth in the constellation Cygnus, includes at least two giant planets and one companion star (Figure 1). The discovery of a previously unknown companion (HAT-P-7B) to the central star (HAT-P-7) as well as confirmation of another giant planet (HAT-P-7c) orbiting outside of the retrograde planet HAT-P-7b offer new insights into how retrograde planets (Notes 1 and 2) may form and endure. 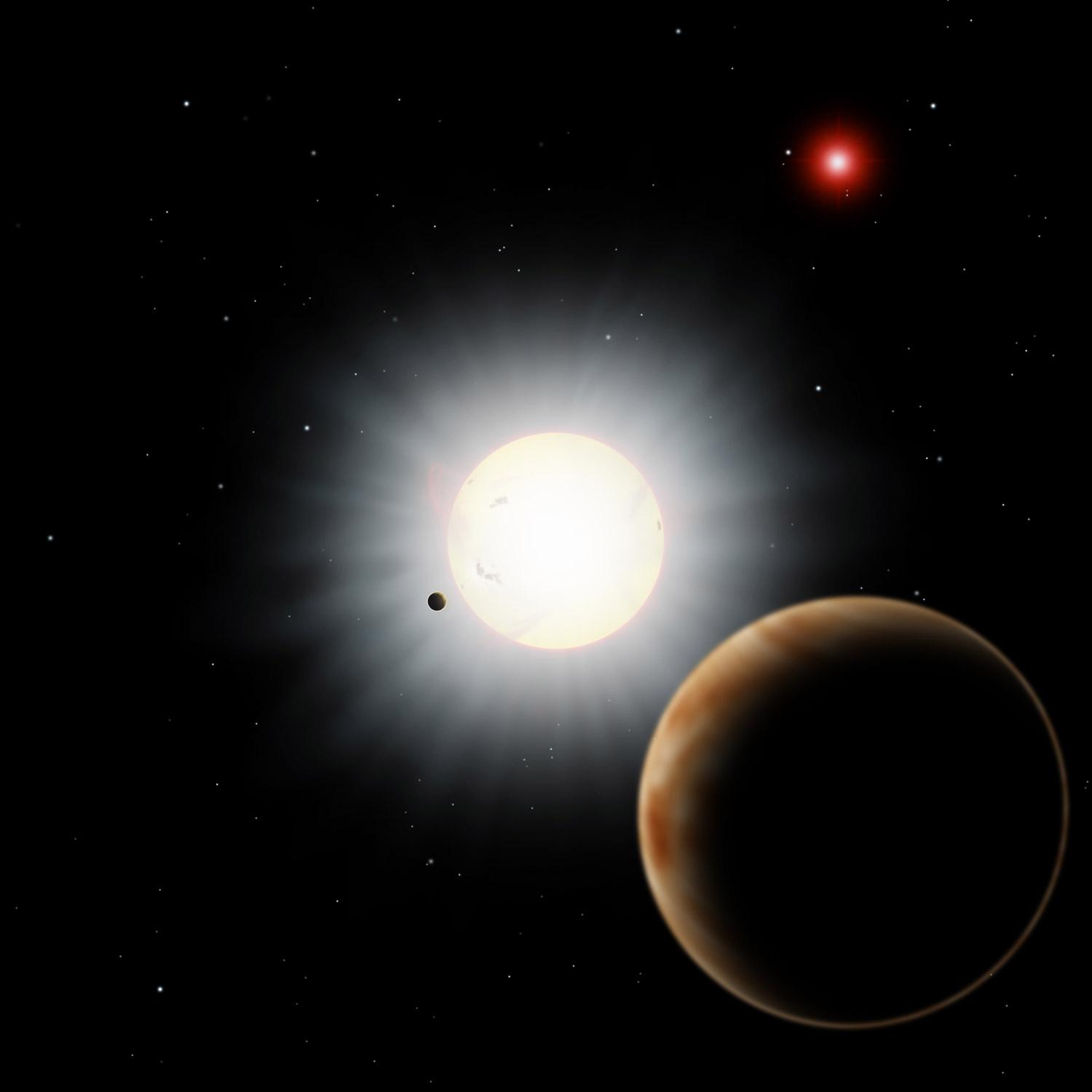 Figure 1: Artist's rendition of the HAT-P-7 system. Researchers used rhe Subaru Telescope to discover the retrograde planet (nearest the central star), another giant planet (in the foreground), and a companion star (upper right) in this system. (Credit: NAOJ)

A Japanese collaboration led by Norio Narita (National Astronomical Observatory of Japan) used the Subaru Telescope in 2008 to discover the first evidence of a retrograde orbit of an extrasolar planet, HAT-P-7b. Although retrograde planets, which have orbits that run counter to the spin of their central stars, are absent in our Solar System, they occur in other planetary systems in the Universe. However, scientists did not know how such retrograde planets formed.

Since his team's initial discovery of the retrograde planet HAT-P-7b, Narita has pursued his quest to explain its origin. As participants in the SEEDS (Strategic Exploration of Exoplanets and Disks with the Subaru Telescope, Note 3) Project, he and his colleagues, Yasuhiro Takahashi, Masayuki Kuzuhara, and Teruyuki Hirano (all from the University of Tokyo), took high contrast images of the HAT-P-7 system (Figure 2) with HiCIAO (High Contrast Instrument for the Subaru Next Generation Adaptive Optics) to develop a more complete picture of it. 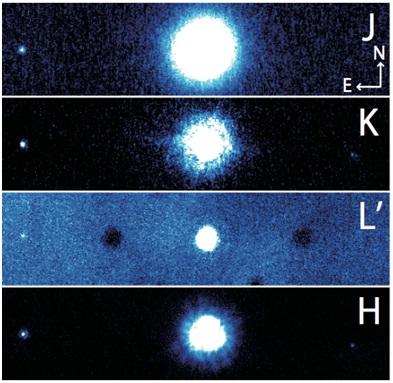 Figure 2: Images of HAT-P-7 and its companion star obtained with the Subaru Telescope. IRCS (Infrared Camera and Spectrograph) captured the images in J band (1.25 micron), K band (2.20 micron), and L' band (3.77 micron) in August 2011, and HiCIAO captured the image in H band (1.63 micron) in July 2012. North is up and east is left. The star in the middle is the central star HAT-P-7, and the one on the east (left) side is the companion star HAT-P-7B, which is separated from HAT-P-7 by more than about 1200 AU (1AU Astronomical Unit, which corresponds to the distance from the Sun to the eEarth). The companion is a star with a low mass only a quarter of that of the Sun. The object on the west (right) side is a very distant, unrelated background star. (Credit: NAOJ)

The team first discovered two companion candidates around the HAT-P-7 system in 2009 and measured their proper motion (Figure 3) over a three-year period until 2012. They confirmed that one of the two candidates is a common proper motion stellar companion to HAT-P-7, named HAT-P-7B. 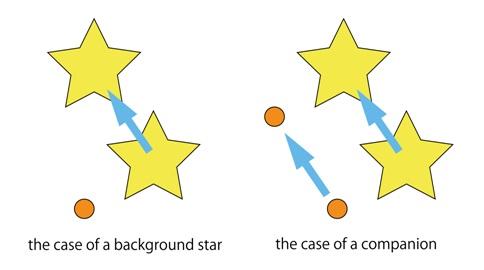 The team also confirmed a long-term radial velocity (Note 4) trend for HAT-P-7. This indicated the existence of another giant planet, HAT-P-7c, orbiting between the orbits of HAT-P-7b (the retrograde planet) and HAT-P-7B (the stellar companion).

Narita's team has demonstrated the importance of conducting high-contrast direct imaging observations for known planetary systems to check for the presence of outer faint companions, which may play an important role in understanding the entire picture of planetary migration. The findings provide important clues for understanding the origin of a variety of planetary systems, including those with highly tilted and eccentric orbits.

1.A retrograde planet is a planet with an orbit that runs counter (over 90 degrees) to the direction of the spin of the central star. Previous observations have revealed that about a third of hot Jupiters, exoplanets with characteristics similar to Jupiter but orbiting very close to their host stars, have tilted or even retrograde orbits relative to the spin of their central star.

2.The letters after the name of a star are consistent ways that astronomers label parts of a planetary system. The planetary system is named for the central star (HAT-P-7), and a companion star is labeled with an upper case B (HAT-P-7B). The first planet discovered in the system is designated by a lower case b (HAT-P-7b), and the next, with a lower case c (HAT-P-7c), and so on.

3.SEEDS (Strategic Exploration of Exoplanets and Disks with Subaru Telescope) is a large-scale, five-year strategic project led by Motohide Tamura (National Astronomical Observatory of Japan). Using a total of 120 observing nights at the Subaru Telescope, the project focuses on exploring hundreds of nearby stars in an effort to directly image extrasolar planets and protoplanetary/debris disks around stars.

4.Radial velocity is a measure of the rate of change in the distance of an astronomical object. When a planet orbits around a star, it causes a tiny shift in the star's spectrum which can be measured with a high-precision spectrograph and and used to infer the presence of a planet.