An international team of astronomers, led by Dr. Kazuya Matsubayshi (Kyoto University), has discovered that outflows of gas from starburst galaxy M82 (see Note 1 for a reference figure) collide with a "cap" of gas clouds 40,000 light years away from the galactic disk. Shockwaves (Note 2) from M82's central starburst region are the most likely source of the bright clouds within the cap. The large light-gathering power of Subaru Telescope's 8.2-m mirror and its ability to produce highly detailed images enabled the researchers to make these findings, which provide important clues about the wind's power.

The central regions of starburst galaxies are sites of immense star formation. They give birth to thousands of massive stars, which are dozens of times heavier than the Sun and then explode as supernovae when they die. Many supernovae explosions heat the gas around them to temperatures of more than a million degrees, and this hot gas flows out from the galaxy as galactic wind. These winds are so powerful that they may play an important role in the evolution of galaxies and the inter-galactic medium. However, galactic winds are usually diffuse and difficult to observe; therefore, it has been difficult to confirm their power. Nevertheless, it is possible to precisely estimate their energy level by measuring how far the galactic winds reach.

The current team tackled the issue of shedding light on the processes behind large-scale galactic winds by focusing their research on the "cap" of M82, one of the closest starburst galaxies to Earth, about 12 million light years away. M82 has large-scale galactic winds, so-called "superwinds", and its cap consists of gas clouds about 40,000 light years away from its galactic disk. Matsubayashi pinpointed the research question: "Why are there ionized gas clouds so far from the galactic disk? If we investigate the ionization source of the cap, we can confirm whether M82's galactic winds reach it."

Two possibilities for ionization sources of M82's cap are: 1) ultraviolet photons from massive stars in M82's starburst regions and 2) shockwaves caused by the collision of M82's galactic winds with gas clouds in the cap (Figure 1). The researchers reasoned, "Because we can estimate the intensity of ultraviolet photons from the starburst regions and the pressure of the galactic winds from past observational data, the morphology and H-alpha (Note 3) intensity of the cap region will reveal the answer." 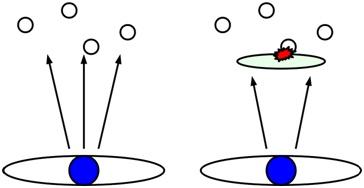 The team investigated the ionization source of M82's cap by observing it with Kyoto 3DII mounted on the Subaru Telescope. They used the Fabry-Perot interferometer, which works as a narrow-band filter that researchers can tune for a desired wavelength. They obtained images of continuum and H-alpha emissions of the cap. (Figure 2)

Figure 2: Images of the cap of M82 (Credit: NAOJ) left: H-alpha image of M82. The contours represent the intensity of X-rays. The brightest region at the lower left of the panel is M82's center. The diffuse emission region at the upper right is the cap. center: Continuum image that shows the background area of the cap. The objects in this panel are stars in the Milky Way Galaxy or distant galaxies. There is no detection of a continuum emission from the cap. right: H-alpha image of the cap. This shows the detection of H-alpha emission from the cap. It also shows that the cap is clumpy rather than uniform. The typical size of clumps is 300 - 500 light years in diameter.

If UV light from the M82 starburst regions ionized the clumps of the cap, the H-alpha emission should be ten times weaker than what was observed. In contrast, the H-alpha intensity predicted by the shock model matches well with the measurement from the observations. Therefore, the team concluded that shockwaves from M82's galactic winds ionized the gas clouds in the cap. This suggests that the galactic winds travel and have direct impacts on inter-galactic gas at least 40,000 light years away from the galactic disk.

The research raises another question: "Do galactic winds affect gas clouds at an even further distance from the galactic disk?" Matsubayashi remarked, "We would like to carry out observations to survey more distant gas clouds ionized by galactic winds."

・The scientific results on which this release was based were published in the December 10, 2012 edition of The Astrophysical Journal: K. Matsubayashi et al., "Ionization Source of a Minor-Axis Cloud in the Outer Halo of M82", 761:55 (8pp).
・For more information about M82's galactic winds, refer to previous press releases from Subaru Telescope:
◎"Red Light Flowing from Galaxy (M82, NGC 3034)"
◎"New Images of Starburst Galaxy M82 Reveal Multiple Sources of Its Superwind" 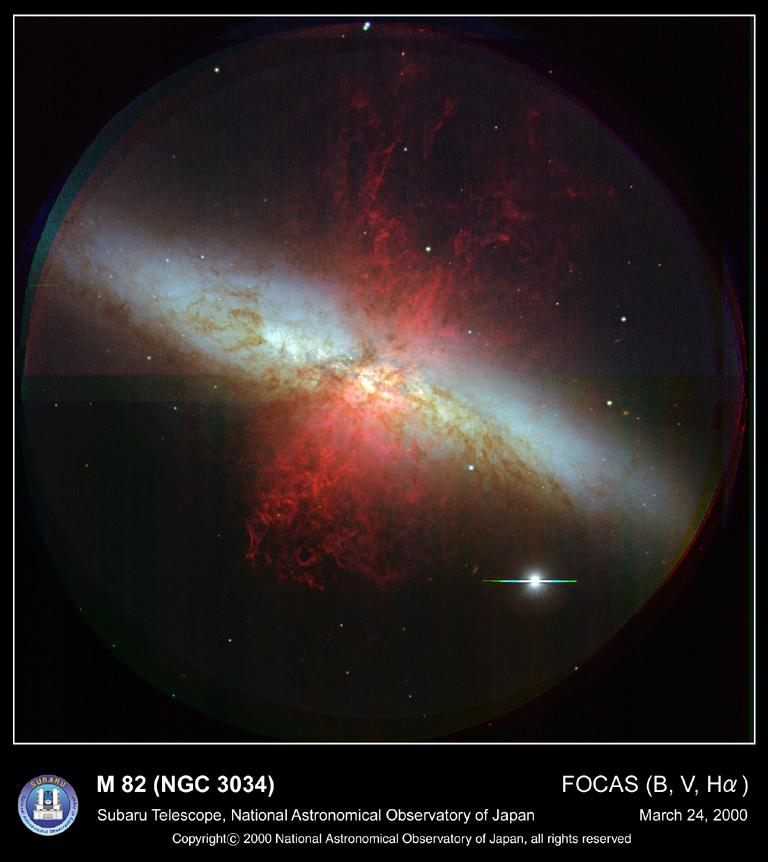 1)This reference figure is an image of M82 viewed edge-on and captured by FOCAS (Faint Object Camera and Spectrograph) mounted on the Subaru Telescope. The red filaments that expand perpendicular to the galactic disk are outflowing ionized gas from many supernovae in the galaxy. (Credit NAOJ)

2) A shockwave is a type of disturbance spreading at supersonic speed in a compressive medium, such as air. Immense explosions or supersonic flights can cause shockwaves.

3) An H-alpha emission is one of the emission lines from hydrogen atoms and results when ionized hydrogen and an electron recombine. The wavelength of H-alpha is 656 nm, and it is the brightest hydrogen emission line in the optical wavelength (400 - 750 nm)