For the first time, an international team of astronomers, led by David Sobral (Leiden Observatory) has applied a single method to track and study galaxies over the past 11 billion years. Using a powerful combination of the Subaru Telescope, the United Kingdom Infrared Telescope (UKIRT), and the Very Large Telescope (VLT), the team took precise snapshots of the Universe when it was 2, 4, 6, and 9 billion years old. Their results revealed a very clear and continuous decline in the rate of the star formation activity in the Universe. Star formation now is 30 times lower than at its likely peak 11 billion years ago and may yield only 5 % more stars than those that exist today.

Figure 1: Illustration of time-traveling through the Universe with one method. This shows snapshots of galaxies like our own at different stages of the evolution of the Universe. (Credit for the composite: David Sobral)

Over the last two decades, astronomers have used powerful telescopes to look back in time at different ages/epochs in the Universe in an effort to measure its star formation history. However, the use of a variety of methods and techniques has limited astronomers' progress and understanding, because different methods provide different results, making a comparison of outcomes difficult. Nevertheless, the combined results of these diverse ways of studying the Universe allowed astronomers to not only confirm that it formed many more stars in the past but also to predict, for the first time, the total amount of stars that should exist as the Universe aged. However independent assessments of this quantity seemed to indicate that such a heterogeneous mix of measurements greatly overestimated the quantity of stars in the Universe.

To meet the challenge of developing consistent, comparable measurements of star formation activity in different epochs, the current team used, for the first time, a single, robust method to track galaxies like our own over the bulk of cosmic history: measurements with the hydrogen H-alpha emission line, a very reliable indicator of star-formation activity. They maximized both the individual and combined capabilities of three telescopes (Subaru Telescope, UKIRT and VLT) and customized filters in a fully consistent way. By surveying large areas and obtaining very deep images, they gathered the largest samples ever assembled (more than ten times larger than previous ones) at different ages of the Universe. Using the same method and techniques is a powerful way to look back in time to obtain fully comparable chunks of the Universe, which contain hundreds of star-forming galaxies. Consistent application of the same technique allows astronomers to really understand changes as the Universe ages, because it allows comparisons of like with like across time.

The results from the research are also able to reconcile the apparent discrepancy between the predicted quantity of stars in the Universe, derived from a variety of methods, and those measured directly. Sobral explained, "If we use our consistent measurement of the star formation history of the Universe to predict the number of stars that should exist across cosmic time, then the numbers are a perfect match to what is actually seen. The two measurements can finally be reconciled. Half of the stars that currently exist in the Universe were formed more than 9 billion years ago in less than 2 billion years, while after that, it took the Universe almost 5 times as much time to produce the same quantity." 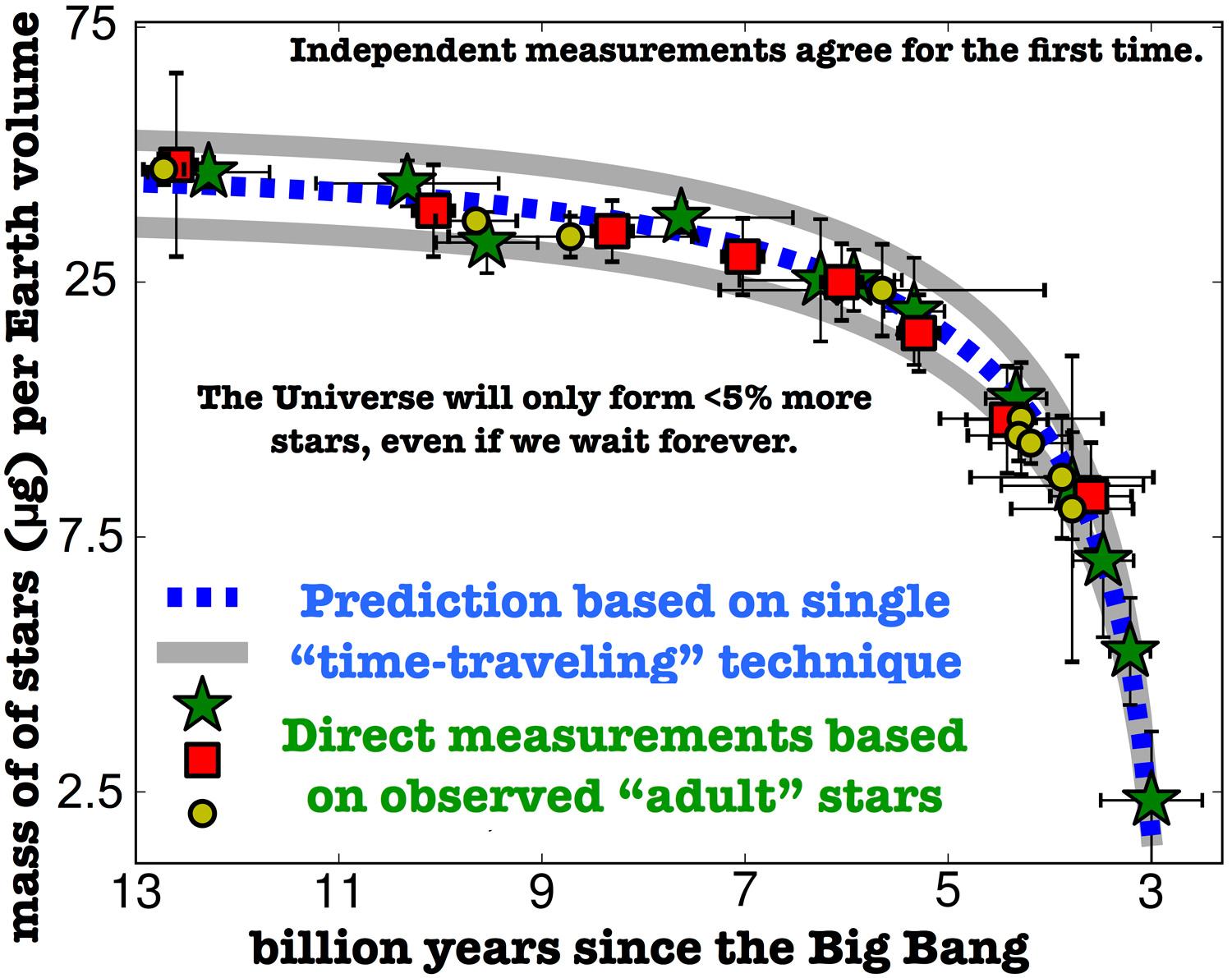 Figure 2: Agreement between predictions and direct measurements. The single method used for tracking and studying galaxies revealed a continuous decline of star formation in the last 11 billion years. By using this method and the derived star formation history of the Universe, it is possible to predict the total mass in stars and its distribution in the Universe. The prediction fully agrees with independent measurements. (Credit: David Sobral/HiZELS)

The quest for understanding galaxy formation and evolution across the history of the Universe continues. Sobral commented, "An accurate measure is just the beginning. Our goal is to understand what is driving such a tremendous decline in the star formation activity in the Universe. The samples obtained, including those with the Subaru Telescope, will now be valuable tools towards such understanding".